Rumsfeld managed to do terrible things throughout his life while remaining tremendously banal. 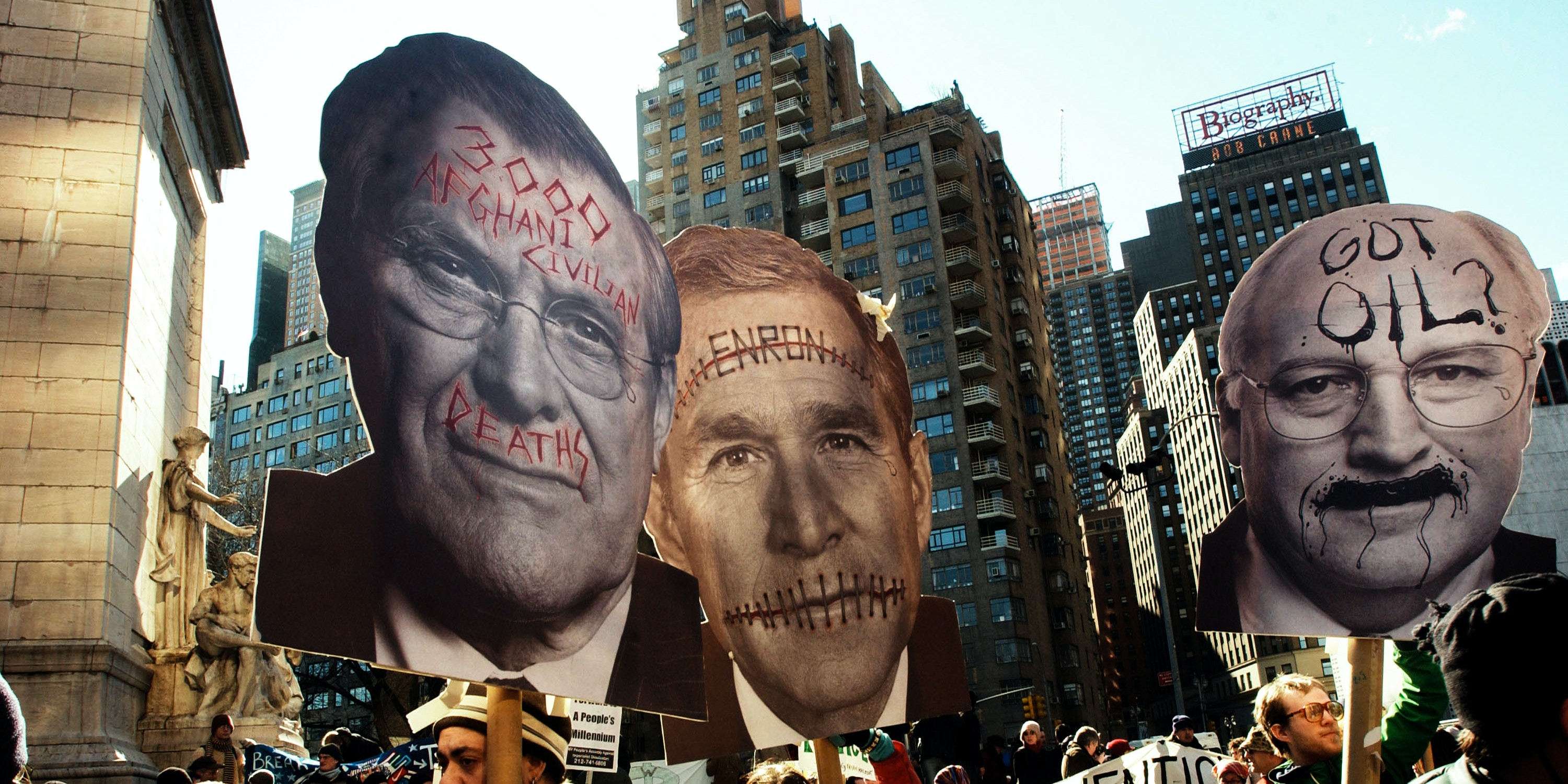 At 2:40 p.m. on September 11, 2001, Secretary of Defense Donald Rumsfeld issued orders to one of his underlings. Among Rumsfeld’s thoughts:

That is, less than six hours after the first plane hit the north tower of the World Trade Center, Rumsfeld was anxious to “hit SH [Saddam Hussein] @ same time.” And he wasn’t especially concerned whether Iraq or any target was responsible for the attacks. He wanted to conduct “massive” attacks on targets “related & not” (emphasis in original). That is, he saw the deaths of thousands of Americans as a wonderful opportunity to do whatever the George W. Bush administration wanted.

At that moment, Rumsfeld was doing what he did best throughout his life: spinning the unspeakable suffering of others into the desired ends of himself and his political allies.

Rumsfeld was born in Chicago in 1932 and grew up in the affluent suburbs north of the city. After graduating from Princeton, he served in the Navy for several years, and by the time he was 30 years old, he was elected to Congress from Illinois.

President Richard Nixon can be heard on his Oval Office tapes saying in admiration that Rumsfeld is “a ruthless little bastard. You can be sure of that.” Former Secretary of State Henry Kissinger later characterized Rumsfeld as “formidable” and “a special Washington phenomenon: the skilled full-time politician-bureaucrat in whom ambition, ability, and substance fuse seamlessly.”

Rumsfeld survived Watergate to serve in the next administration as President Gerald Ford’s chief of staff, with Dick Cheney as his deputy. Then, at age 43, he was named secretary of defense — for the first time. One of Rumsfeld’s most notable actions was his participation in the creation and promotion of “Team B,” a special CIA project to challenge the agency’s estimates of Soviet strength.

Filled with hard-right ideologues, Team B predictably came to conclusions that were wildly alarmist and largely fantasy: The Soviet economy was growing at a blistering pace, as were its weapons systems, and it was poised to strike the West at any moment. Rumsfeld himself later said, “One of the most significant events in my adult life has been the massive shift in power away from the United States to the Soviet Union.” The intellectual integrity of Team B and its ethos can be judged by the fact that the Soviet Union collapsed and disappeared in 1991.

After Ford’s 1976 defeat by Jimmy Carter, Rumsfeld spent most of the next two and a half decades at the top level of corporate America, running various large corporations. He did, however, keep his hand in with U.S. foreign policy, most famously taking several trips to Baghdad to meet with Iraqi leader Saddam Hussein on behalf of the Reagan administration, even as Iraq used chemical weapons during the Iran-Iraq War. According to a declassified U.S. cable about one of the meetings, “Hussein showed obvious pleasure” and the session would “prove to be of wider benefit to U.S. posture in the region.” Saddam also warned that the invasion of Lebanon by Syria and Israel was dangerous, because it meant “others would be encouraged to attack and occupy weaker states. Chaos and instability would result.” (Notably, Rumsfeld’s chummy visits took place after the crimes for which Saddam would later be convicted and executed.)

Rumsfeld returned to the Defense Department with the election of President George W. Bush. With many of the Team B personnel back in power, it should have been expected that the case for war with Iraq would consist of similar delirious falsehoods — and it did. Rumsfeld himself lied in a particularly jarring way in a late 2002 interview:

The only way [Iraqi weapons of mass destruction] will ever be found, in my view, effectively is if you find people who have been involved in it who are willing to come and talk to you about it, and tell you where they are. The last time the inspectors were in, that’s how it happened. Two sons-in-laws of Saddam Hussein defected, went into Jordan, and the word came out and they told where these inspectors could go look, they went and looked, and they found weapons of mass destruction.

In reality, two sons-in-law of Saddam did in fact defect to Jordan in 1995. Soon afterward, Iraq turned over a hidden cache of documents about its 1980s WMD programs — but no actual weapons. And one of the Iraqis, Hussein Kamel, who’d run the programs for his father-in-law, specifically said to the United Nations, the CIA, and even on CNN that Iraq no longer had any WMDs. This, of course, turned out to be completely true. Thus the lesson of Rumsfeld’s tale was exactly the opposite of what he claimed: Iraq could successfully hide pieces of paper from inspectors, but that was it.

Later, in Rumsfeld’s memoir “Known and Unknown,” he would claim that the U.S. was effectively right about the WMD issue. John Nixon, a CIA analyst who interrogated Saddam after he was captured, has said he was motivated by the “gibberish” in books like Rumsfeld’s to write his own to set the record straight.

Rumsfeld’s record on other issues during the Bush years was much the same. He approved a memo delineating which methods of torture of prisoners would be permissible while asking why the military would only make them stand for four hours at a time, given that “I stand for 8-10 hours a day.” 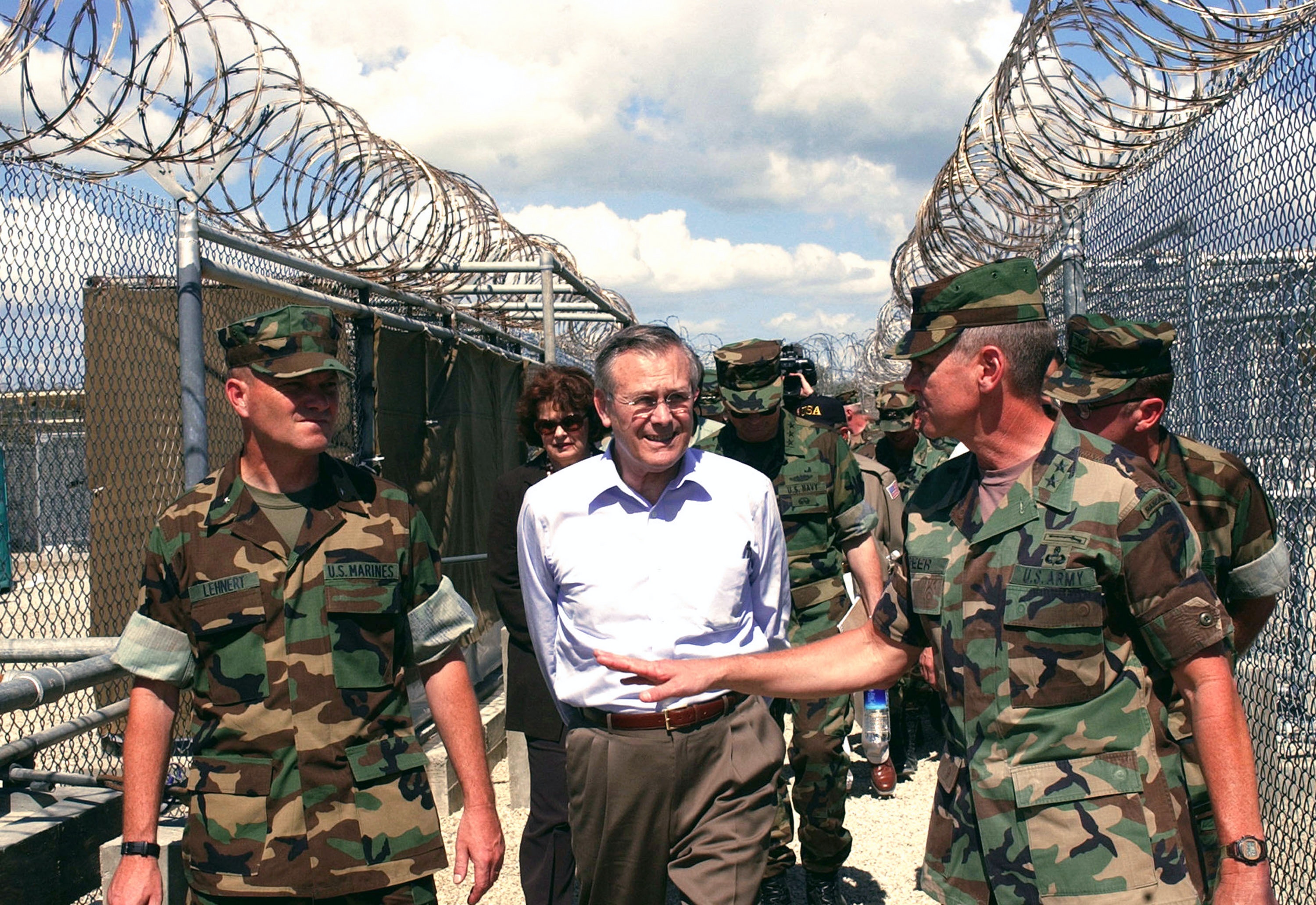 In 2006, Rumsfeld privately praised Ayad Allawi, who’d been interim prime minster of Iraq a few years before. Allawi, Rumsfeld said, “had steel up his backside. … In terms of dealing with him, he was terrific. He could make a decision and he would kick some fanny to get it implemented, and you felt good about it.” Journalist Seymour Hersh has written that Allawi was a hit man for Saddam during the 1970s, killing Iraqi defectors in Europe. The New Yorker also reported that there were “persistent rumors” that Allawi had personally executed seven prisoners just before taking office in Iraq.

Rumsfeld’s downfall finally came when Republicans lost control of both the Senate and House of Representatives in the 2006 midterm elections. Bush needed to appear as though he were making changes, and Rumsfeld was sacrificed.

In retirement, Rumsfeld spent time at his antebellum vacation home on the Chesapeake Bay in Maryland. Appropriately, it was nicknamed “Mount Misery” and had once been owned by a specialist in “breaking” disobedient slaves. Frederick Douglass was sent there at age 16 for punishment and later wrote, “I was completely wrecked, changed, and bewildered; goaded almost to madness.”

And now Rumsfeld is gone. In a statement, his family said, “History may remember him for his extraordinary accomplishments over six decades of public service … the integrity he brought to a life dedicated to country.” This is likely true for establishment history. For instance, almost none of these details about Rumsfeld appear in the obituary just published by the New York Times. But everyone else should remember who Rumsfeld truly was — and the kind of person you need to be to reach the summit of American power.