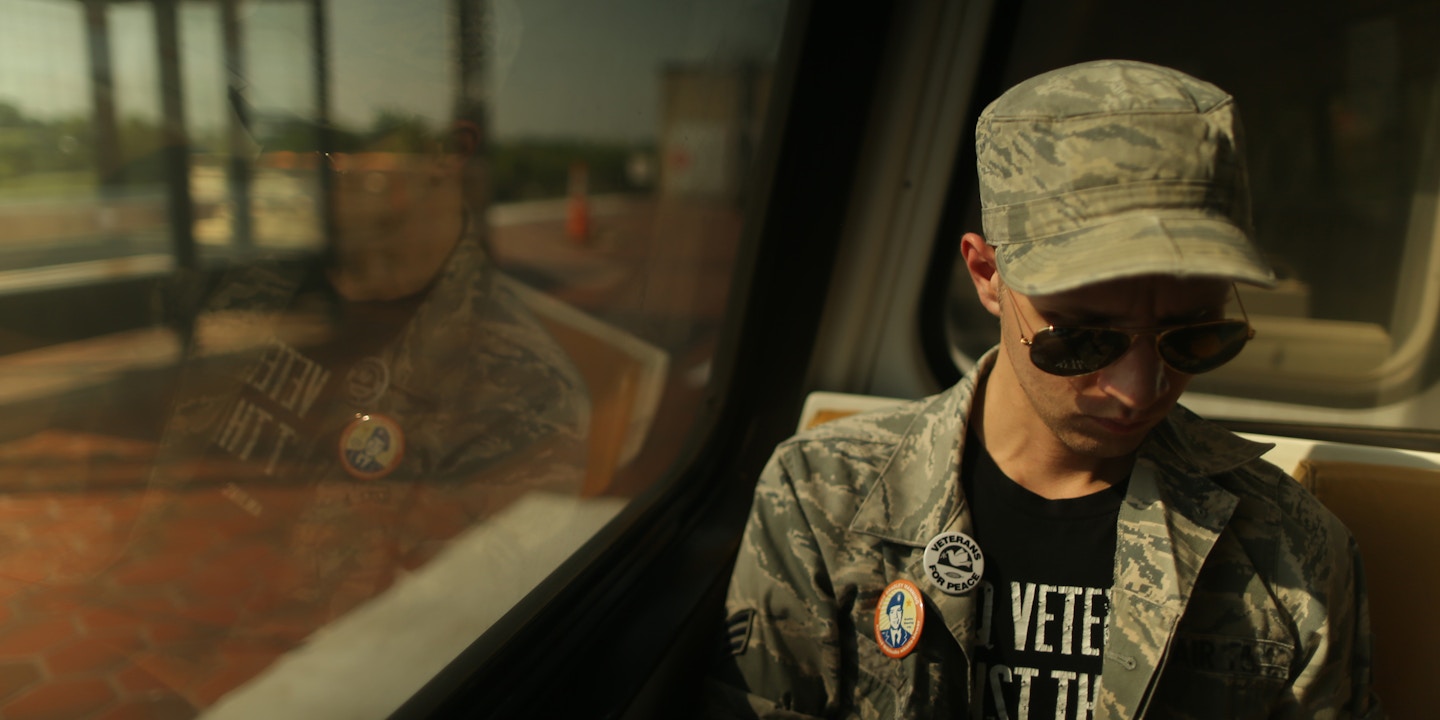 Daniel Hale, a former U.S. Air Force intelligence analyst, was sentenced to 45 months in prison Tuesday after pleading guilty to leaking a trove of government documents exposing the inner workings and severe civilian costs of the U.S. military’s drone program. Appearing in an Alexandria, Virginia, courtroom, the 33-year-old Hale told U.S. District Judge Liam O’Grady that he believed it “was necessary to dispel the lie that drone warfare keeps us safe, that our lives are worth more than theirs.”

“I am here because I stole something that was never mine to take — precious human life,” Hale said. “I couldn’t keep living in a world in which people pretend that things weren’t happening that were. Please, your honor, forgive me for taking papers instead of human lives.”

In delivering his judgement, O’Grady said that Hale was “not being prosecuted for speaking out about the drone program killing innocent people” and that he “could have been a whistleblower … without taking any of these documents.”

Though the nearly four-year sentence fell short of the maximum sentence of 11 years behind bars sought by federal prosecutors, the conviction marked another victory for the U.S. government in an ongoing crackdown on national security leaks that has spanned multiple presidential administrations.

Hale was indicted by a grand jury and arrested in 2019 on a series of counts related to the unauthorized disclosure of national defense and intelligence information and the theft of government property. In addition to documents related to how the government chooses its drone strike targets — and information detailing how often people who are not the intended targets of those strikes are nonetheless killed — Hale was also linked to the release of a secret, though unclassified, rulebook detailing how the U.S. government places individuals in its sprawling system of watchlists. Long shrouded in secrecy, the release of the rulebook has been celebrated by advocacy groups as a triumph of the post-9/11 era.

Since his indictment more than two years ago, government filings have strongly implied that The Intercept was the recipient of Hale’s disclosures. In a statement on Tuesday, Intercept Editor-in-Chief Betsy Reed said, “Daniel Hale will spend years in prison for leaking documents that the government implied were published by The Intercept. These documents revealed the truth about the U.S. government’s secretive, murderous drone war, including that the killing of civilians was far more widespread than previously acknowledged. The Intercept will not comment on our sources. But whoever brought the documents in question to light undoubtedly served a noble public purpose.”

She added: “Hale was also charged with disclosing a secret rule book detailing the parallel judicial system for watchlisting people and categorizing them as known or suspected terrorists without needing to prove they did anything wrong. Under these rules, people, including U.S. citizens, can be barred from flying or detained in airports and at borders while being denied the ability to challenge government declarations about them. The disclosure of the watchlisting rule book led to dozens of legal actions and important court victories for the protection of civil liberties.”

As has become standard practice in the U.S., Hale was charged under the Espionage Act, and he pleaded guilty to one count in March. (O’Grady dismissed the four remaining charges against Hale with prejudice on Tuesday, meaning those charges can’t be filed again.) Under the highly controversial 1917 law, defendants cannot point to their efforts to inform the public about government actions and operations as a defense for leaking classified information. President Barack Obama weaponized the anti-spying law as a tool to hammer government employees who were sources for national security stories, particularly those that were unflattering for the government. The Trump administration continued the practice and now, so too, has the Biden administration.

“In today’s sentencing, the court did reject the prosecution’s extreme demands, but Hale’s prison sentence is nonetheless another tragic example of how the government misuses the Espionage Act to punish alleged journalistic sources as spies, a practice that damages human rights, press freedom, and democracy,” Reed added in her statement.

Hale’s support team, in a statement following the sentencing, said: “everyone agrees #DanielHale is not a spy. He is a deeply honorable man who is being punished simply for acting on his conscience and telling the truth.”

Ahead of his sentencing this week, Hale filed an 11-page handwritten letter to the court detailing the motivations behind his actions. In vivid detail, Hale recalled his own experience locating targets for American drone strikes. By some estimates, U.S. drone operations abroad, conducted by both the military and the CIA, have killed between 9,000 and 17,000 people since 2004, including as many as 2,200 children and multiple U.S. citizens. Those estimates, however, undercount the true cost of remote American warfare — as Hale noted in his letter to the court last week, the U.S. military has a practice of labeling all individuals killed in such operations as “enemies killed in action” unless proven otherwise.

“With drone warfare, sometimes nine out of 10 people killed are innocent,” Hale said on Tuesday. “You have to kill part of your conscience to do your job.”

In their sentencing filing, Hale’s defense lawyers said that he had “felt extraordinary guilt for having been complicit in what he viewed as unjustifiable killings” through his involvement in the drone program and argued that his disclosures were compelled by a sense of moral duty. In motions filed in the past week, government prosecutors sought to rebut this picture, painting Hale as a self-interested egomaniac who risked his freedom to ingratiate himself with the journalists he admired and compared his justifications to those of a heroin dealer.

In arguing that Hale should receive a maximum sentence of more than a decade in prison, the government repeatedly referred to secret evidence — unavailable for public review — purporting to show that the Islamic State had circulated Hale’s disclosures online, thus putting American lives at risk. Harry P. Cooper, a former senior official in the CIA and noted agency expert on classified materials who reviewed the documents and provided a declaration in Hale’s case, offered a starkly different interpretation.

“The disclosure of these documents, at the time they were disclosed and made public, did not present any substantial risk of harm to the United States or to national security,” Cooper said in a sworn declaration. “In short, an adversary who has gained a tactical advantage by receiving secret information would never publicize their possession of it.”

Assistant U.S. Attorney Gordon Kromberg dismissed that reasoning, arguing that Hale’s case in fact deserved a harsher sentence than other prior whistleblower cases on the convoluted basis that, unlike in those cases, it was difficult to substantiate what harm his disclosures had actually done. “We do not know whether this information already has been or will be used in the future by terrorists or other foreign adversaries,” Kromberg wrote. “What we can be sure of is that Hale’s actions risked damage to the safety and security of Americans in the past, and will continue to do so in the future.”

The Justice Department also rejected Hale’s argument that he was providing a public service by revealing information about covert military operations that had killed civilians. “According to Hale, what he did was legally wrong but morally right,” prosecutors wrote. “In analogous circumstances, no one would award such a reduction to a heroin dealer who admitted that he violated the law by distributing heroin, but simultaneously asserted that by distributing the heroin he was helping society rather than harming it.”

Hale is a descendant of Nathan Hale, the American patriot who was hanged by the British for stealing documents in 1776. Addressing the court Tuesday, Hale quoted the words often attributed to his famed ancestor: “My only regret is that I have but one life to give to my country, whether here or in prison.” As he did in the letter he submitted to the court last week, Hale, in his appearance before the judge, focused his attention on the victims of U.S. foreign policy.

Update: July 28, 2021
This article has been updated to note that Judge Liam O’Grady dismissed the four remaining charges against Hale on Tuesday.