In 2013, a federal judge mandated oversight after finding that the NYPD’s racially disproportionate use of stop-and-frisk was unconstitutional. 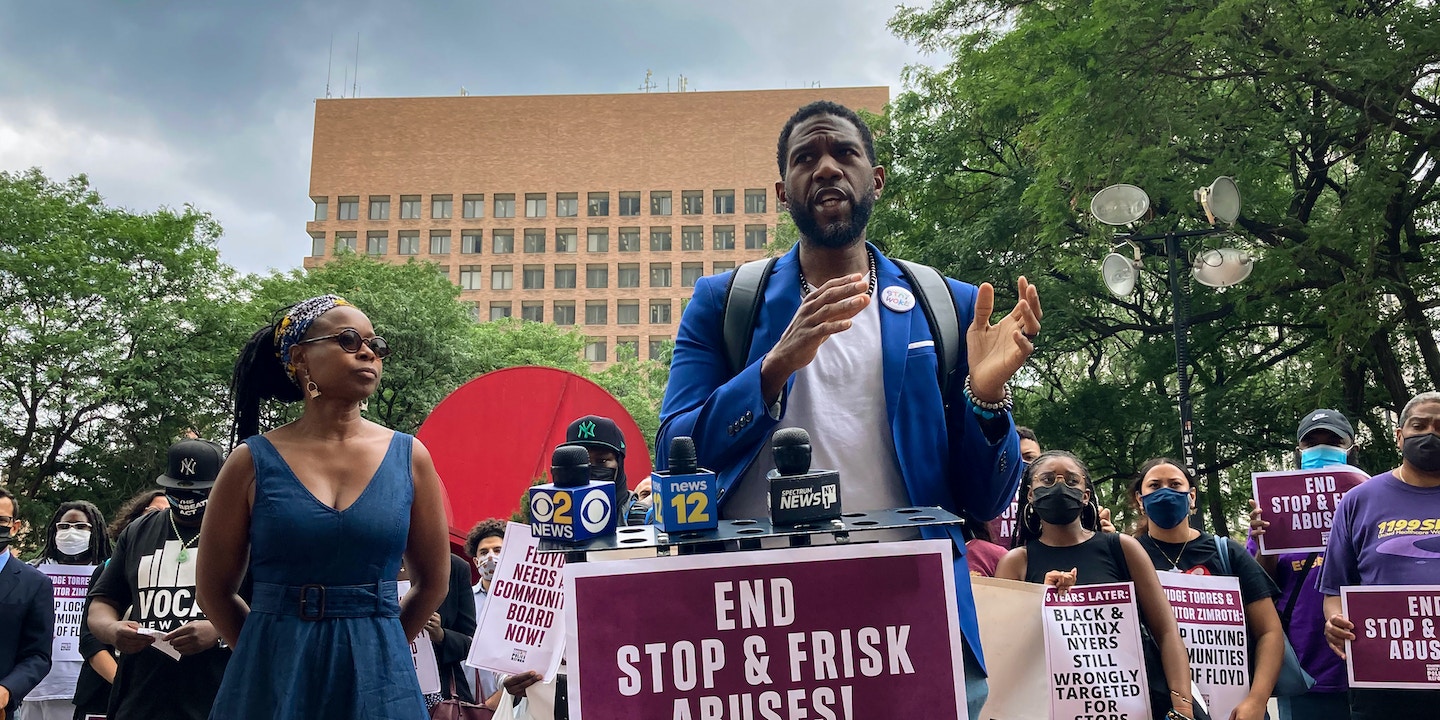 A landmark federal court ruling eight years ago was supposed to put an end to the New York Police Department regime of racially targeted harassment known as stop-and-frisk. The people who won that ruling now say the court-ordered reform process is in danger of falling apart.

In a motion filed in federal court Thursday, the plaintiffs in the original suit, Floyd et al. v. The City of New York, warn that the court-appointed monitor is undermining the credibility of the reform process by ignoring the communities actually affected by the racist police policies.

“We cannot have meaningful and lasting change if the only people in the room are lawyers, police executives, and academics.”

“We cannot have meaningful and lasting change if the only people in the room are lawyers, police executives, and academics,” said Darius Charney of the Center for Constitutional Rights, one of the lawyers who worked on the Floyd trial, speaking Thursday. “You cannot accurately assess the legality and fairness of the police department’s treatment of the people of the city if you don’t talk to the people who are actually being policed.”

The picture painted by the motion — of a reform process ever more divorced from the experience of the people it was put in place to help — raises questions about the capacity of court monitors to impose lasting change on police agencies resistant to reform.

The motion also comes in the final days of the mayoral administration of Bill de Blasio, who rose to office on promises of police reform and accountability but soon disappointed supporters of that agenda. The next mayor will likely be Eric Adams, a former NYPD officer who spoke against the excesses of stop-and-frisk and NYPD racism but campaigned for mayor on a public safety agenda and overcame opponents calling for police accountability.

Activists are expressing worry about backsliding on what few serious police reforms have already been made in the NYPD. The plaintiffs’ motion in the Floyd case, however, suggests even marquee efforts at reform are already on shaky ground.

Judge Shira Scheindlin’s 2013 ruling in the Floyd case, after years of litigation, was damning. Scheindlin found that, despite repeated warnings that the NYPD was violating New Yorkers’ constitutional rights with its swarming stop-and-frisk regime, the department “deliberately maintained and even escalated policies and practices that predictably resulted in even more widespread Fourth Amendment violations,” and “has repeatedly turned a blind eye to clear evidence of unconstitutional stops and frisks.”

In 2011, at the peak of stop-and-frisk, the department made some 686,000 stops, 90 percent of them people of color, with only 6 percent of those stops resulting in arrest.

Having found the NYPD’s racist policy unconstitutional, Scheindlin’s remedy was, at least by the limited standards of judicial intervention in police departments, sweeping. She ordered the NYPD to overhaul its policies, trainings, and practices to end its race-based mass stop-and-frisks. The decision required the department to adopt body cameras and created a monitorship to look over the NYPD’s shoulder to make sure the department was complying with her orders.

Scheindlin also created a process to ensure that the people who had been suffering under stop-and-frisk would have ample say in how to fix the situation, because, she wrote, “if the reforms to stop and frisk are not perceived as legitimate by those most affected, the reforms are unlikely to be successful.”

That community-consultation process concluded in 2018, but the community groups and lawyers who brought the suit in the first place said that in the years since, the court-appointed monitor, Peter Zimroth, has ignored many of the recommendations that came out of the community consultations. Instead, they said, Zimroth, the former head of the NYC Law Department, which defends the city and its police when they are sued, has devised a closed and secretive process in which lawyers, scholars, and police officials discuss compliance metrics that consist, in large part, of the NYPD’s self-reported information.

“There is a lack of information and clear understanding of the current status of the Floyd monitorship and of NYPD stop-question-and-frisk reform overall.”

The New Yorkers with the most stake in police reform, the motion alleges, have been shut out by means of difficult-to-access reports and confidentiality orders. (Zimroth did not respond to a request for comment.)

The result, according to the groups backing the motion, is that New Yorkers have become confused and distrustful of the process. “Among New Yorkers of more color, there is a lack of information and clear understanding of the current status of the Floyd monitorship and of NYPD stop-question-and-frisk reform overall,” wrote New York City Public Advocate Jumaane Williams in a declaration filed with the court motion Thursday. “Many are surprised to learn that the monitorship and reform process is an active, ongoing event.”

Even by his own standards, Zimroth’s oversight is hitting snarls. By all accounts, NYPD stops have plummeted since their peak a decade ago, but available evidence suggests that they remain profoundly racially skewed. Making any meaningful assessment of the situation is difficult, however, because even under a federal monitorship, the NYPD appears unable or unwilling to document its own behavior.

In his October report, Zimroth noted that, in the most recent audit, officers were only complying with the requirement to report their stops 56 percent of the time. “Any assessment of compliance with the Court’s remedial orders will be impossible unless the Department finds ways to ensure that unreported stops are no longer an issue,” he wrote. (The NYPD declined to comment for this story.)

To salvage the court-ordered remedial process, the Floyd plaintiffs are asking the court to revise the remedial order to require the monitor to conduct regular community surveys. They want to go beyond what the NYPD is reporting about its own compliance to actually test how officers are behaving on the street, through field audits. The motion also asks the judge to create a Community Collaborative Board, made up of members of the communities most affected by stop-and-frisk, to consult with the monitor and offer comments on proposed reforms.

“The reason we have had five years of stasis and lack of progress is that we are not listening to communities,” said Corey Stoughton of the Legal Aid Society, another lawyer working on the Floyd case. “It is ironic and sad to me that table of experts discussing police reform is shutting out the real experts on this subject, who are the communities who are impacted by this every day.”