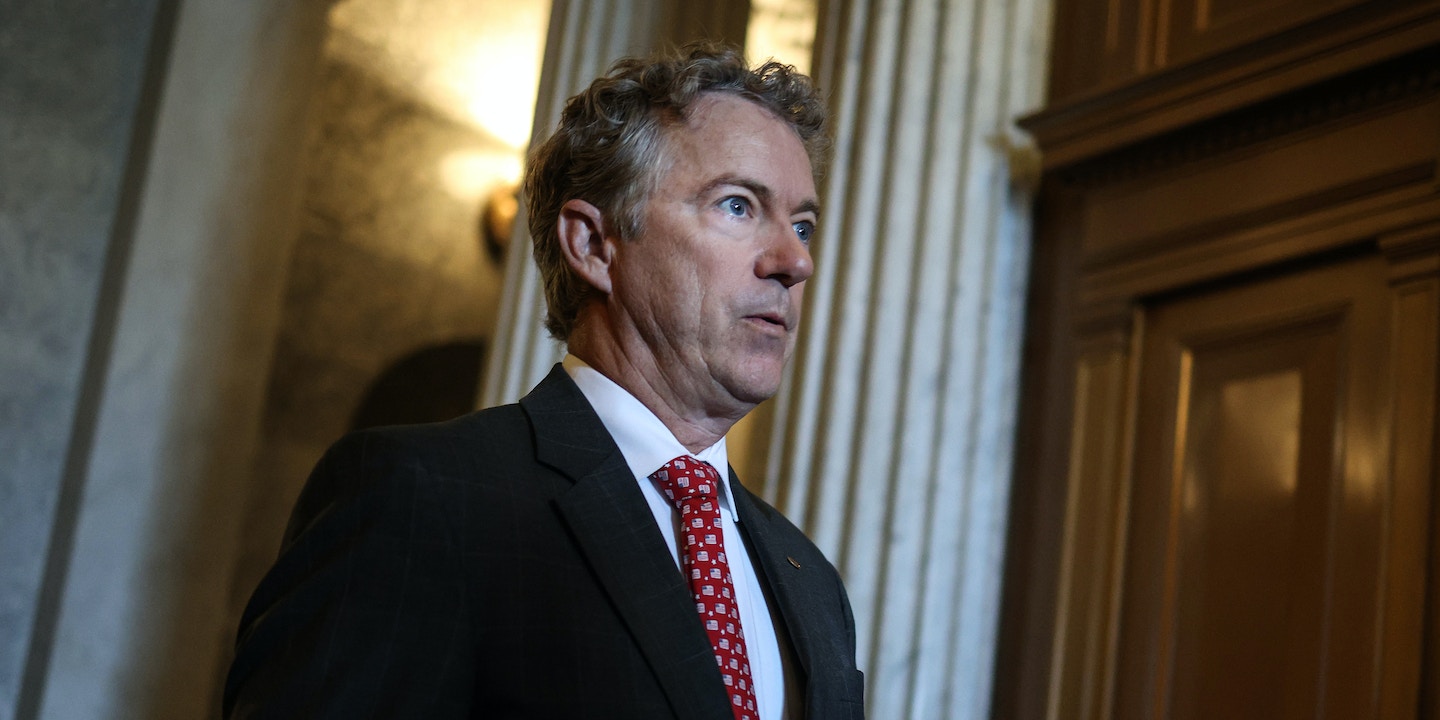 In a deep-red Ohio district, libertarian super PACs tied to Sen. Rand Paul are pumping hundreds of thousands of dollars into a Republican congressional primary to promote a candidate who’s been entirely missing from the campaign trail and even paying himself a salary. Independent expenditure groups have drained more money on the absent Ron Hood than any other candidate, including President Donald Trump-backed coal lobbyist Mike Carey, in Ohio’s 15th Congressional District special election. The contest is being closely watched as a test of the former president’s endorsement power.

Hood, a former Ohio House legislator, is one of 11 Republicans competing in tomorrow’s primary election to replace Steve Stivers, who resigned from Congress to lead the Ohio Chamber of Commerce. The stakes are especially high for the Trump brand ahead of the 2022 midterms; the former president’s preferred candidate in Texas’s 6th Congressional District special election, Susan Wright, lost her primary last week. Trump’s team responded with more than $400,000 in last-minute advertisement purchases to support Carey.

But Carey faces a wave of outside-funded advertisements that have been advocating for weeks on behalf of Hood, who similarly identifies as a Trump loyalist. After Paul announced his support, his affiliated super PAC Protect Freedom, which claims that Democrats stole the 2020 presidential election and is funded by Wall Street billionaire and school choice activist Jeff Yass, spent nearly $680,000 on targeted ads boosting Hood in July alone. Another $80,000 has come from the group America’s Liberty, also backed by Yass and founded by John Tate, the campaign manager for former Rep. Ron Paul’s 2012 presidential race who was convicted of multiple campaign finance violations. Conservative Outsider, which is primarily funded by Protect Freedom, has spent more than $200,000 bashing Carey.

Yet Hood doesn’t have much popularity among individual donors. As of July 14, Virtues Golf Club owner Thomas Hwang’s entirely self-funded campaign had the largest bank account with nearly $580,000, followed by Ohio state Sen. Bob Peterson; Carey; state Rep. Jeff LaRe; attorney Omar Tarazi; and Christian activist Ruth Edmonds. Hood trailed with $156,000 from 60 donors, less than half of whom are Ohio residents. Peterson boasts the most local endorsements. It’s not clear if Hood has any.

Despite the presence of ads funded by his supporters, Hood’s competitors are quick to note his absence from the campaign trail. Tarazi said Hood is the only candidate he hasn’t seen at local campaign events. “I don’t know anybody who has seen him in Ohio in the last six months,” Peterson confirmed. “He literally is sitting in his basement, and these dark-money groups are spending a bunch of money bashing the other candidates and propping him up, and he doesn’t have to do any work at all,” said Republican state Rep. D.J. Swearingen, who has endorsed LaRe.

Meanwhile, according to Federal Election Commission records, Hood paid himself a “candidate salary” of $6,000 between May 1 and June 30. He took home a comparable income during two previous runs for the House of Representatives in 2008 and 2010 too. Between May and mid-July of this year, while his rivals were meeting with prospective voters, Hood spent several thousand dollars on flights, lodging, car rentals, and staff dinners. He paid $4,000 more to JFT Consulting, Tate’s political advisory firm, even though political campaigns are expected to be entirely separate from super PACs.

“It appears he’s in this to make money, not to represent the people in the district,” said Peterson. “He’s paying himself, and he’s not doing events, not meeting with visitors, not traveling the district.”

Jody Carney, mayor of the small Plain City village outside Columbus in Ohio’s 15th Congressional District district, said Hood hasn’t bothered contacting her. (She told The Intercept that with the exception of Peterson, none of the 11 candidates have reached out.) Peterson noted that special interests are instead trying to dominate the race. Carey, chief lobbyist of American Consolidated Natural Resources, the largest privately owned coal producer in the United States, has plenty of outside money boosting his campaign. LaRe, meanwhile, is also tied to corporate interests as the executive vice president of the Whitestone Group, a private security government contractor.

Hood’s absence from the campaign trail appears to track with his history in the Ohio House, where he was known for hardly even showing up to committee meetings or votes, according to Swearingen, his former colleague. When he did make an appearance, there wasn’t much room for compromise. “There are those who will work a little more collaboratively with their colleagues. … I don’t know that Ron Hood subscribes to that way of policymaking; it’s ‘I have to get everything I want 100 percent of the time,’” Swearingen said.

It’s not immediately clear why Paul and his allied super PACs are promoting Hood rather than Carey. A spokesperson from Paul’s Senate office referred The Intercept to a month-old Facebook statement calling Hood “a proven constitutional conservative.” A spokesperson for Protect Freedom did not reply to a request for comment.

One Ohio Republican strategist compared Hood to Rep. Jim Jordan, R-Ohio, saying that Hood’s ultraconservative record in the state Legislature and his eagerness to join the ranks of the House Freedom Caucus may appeal to libertarian groups. After all, Hood made national headlines in 2019 for sponsoring a bill that would force doctors to reimplant ectopic pregnancies or face abortion murder charges, despite the fact that the procedure is medically impossible. That hard-line ideological stance may align with the preferences of Protect Freedom, which last year launched a $1 million campaign attacking Trump-endorsed Rep. Kay Granger, head Republican on the powerful House Appropriations Committee, for supposedly being pro-choice.

“From the PACs and special interests is nothing more than control; it’s literally a war of endorsements,” said Gregory Fournier, a political consultant working for Tarazi, one of the candidates. He argued that special interest groups see in Hood a career politician they can more easily control, whereas Carey has glued himself to Trump throughout the entire campaign. “He can’t stand on his record,” Fournier said of Carey, “and this whole race up in Ohio in my opinion is a comic book campaign.”

Hood’s campaign did not respond to a request for comment.

Regardless of their motives, the biggest far-right activists in the country have Hood’s back. Among his out-of-state individual donors are well-known billionaires Cynthia and Robert Koch and Elizabeth and Richard Uihlein. (The Uihleins also supported his 2010 House campaign, and Richard his 2008 one.) With an estimated 30,000 voters facing 11 Republicans to choose from tomorrow, Hood could easily carry enough votes to torpedo the chances of Trump’s preferred candidate.

“When you’re talking about a total vote of 30,000 votes, anything can happen,” said an Ohio Republican strategist. “It’ll be very interesting … to do the cost-per-vote analysis on what they spent versus how many votes they got because it’s going to be astronomical. It’s going to be ridiculous.”