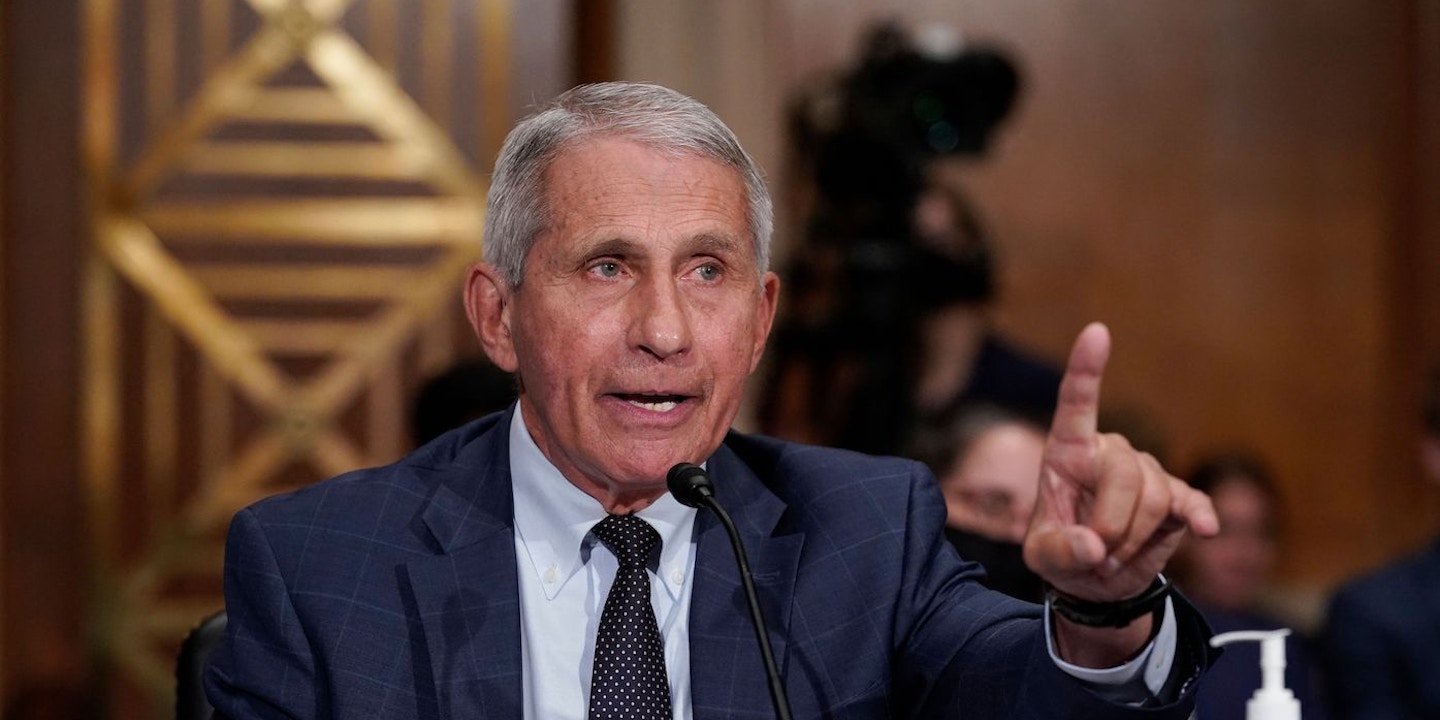 A decadelong debate over pandemic preparedness that has divided some of the world’s leading biologists into opposing camps, for and against so-called gain-of-function research — in which deadly pathogens that could cause pandemics are artificially enhanced for study in the lab — has all but ground to a halt in the past week, thanks to Sen. Rand Paul.

That’s because the Republican senator from Kentucky politicized the argument last week, by cherry-picking expert opinions from critics of the research who call it too risky to pursue, to publicly accuse Dr. Anthony Fauci of lying to Congress, when he said that his National Institute of Allergy and Infectious Diseases had never funded gain-of-function studies at the Wuhan Institute of Virology in China.

Paul’s made-for-television broadside against Fauci thrilled Fox News hosts and colleagues like Rep. Jim Jordan, the Ohio Republican who has also pushed the debunked conspiracy theory that research financed by Fauci’s agency, which some experts describe as gain-of-function, could have led to the development of SARS-CoV-2, the deadly coronavirus that causes the disease Covid-19, in the Wuhan lab. Fauci rejected Paul’s claim that research carried out in Wuhan before 2017 with some support from the NIAID met the definition of gain-of-function and pointedly explained that it was impossible to make SARS-CoV-2 from the coronavirus used in that study.

Almost as soon as the heated exchange concluded, the senator’s staff uploaded a truncated version of the video on his YouTube channel under the headline, “Dr. Fauci Caught Lying about NIH Funding in Wuhan.”

That video was edited by Paul’s staff so that it ends before Fauci responded to the senator’s harangue by saying, “I totally resent the lie that you are now propagating, senator, because if you look at the viruses that were used in the experiments … it is molecularly impossible … to result in SARS-CoV-2.”

On social networks, Republican operatives unconcerned with the facts — like Richard Grenell, the Twitter troll who served as Donald Trump’s director of national intelligence for three months — cheered on Paul’s attack.

He’s been outed. Dr Fauci has no credibility. He’s imploded. And he has made the situation worse. pic.twitter.com/nrE9pldEfm

But Paul’s false claim that Fauci’s supposed support for gain-of-function studies gave him “responsibility for 4 million people dying around the world from a pandemic,” and the ensuing frenzy in the conservative media, also caused some previously outspoken biologists who have made the case against such experiments to fall silent.

In the wake of Paul’s attack on Fauci, several prominent scientists who question the wisdom and safety of gain-of-function experiments — in which biologists deliberately create pandemic-causing pathogens in the lab in order to better prepare to combat them should they evolve in nature — refused to speak to me on the record. One after another, they said Paul’s patently false claim that Fauci was to blame for the pandemic, and his selective outrage at gain-of-function research only when conducted in China, made it all but impossible for them to say anything about the pre-pandemic experiments in Wuhan without being vilified by partisans.

One biologist who supports such research told me that he would have liked the opportunity to correct what he called misinformation about the experiments, but had been worn down by death threats.

To recap, at a hearing in May, Paul first accused Fauci of having supported gain-of-function research in Wuhan, which the senator, who is also a doctor, misleadingly defined as “experimenting to enhance the coronavirus’s ability to infect humans.” In fact, the coronavirus that researchers experimented on between 2014 and 2017 at the Wuhan Institute, with some financial support from the NIAID, was from a strain found in bats that is not closely enough related to SARS-CoV-2 to have been used to fabricate the virus that causes Covid-19 in a lab.

Fauci also insisted that his agency, which is part of the National Institutes of Health, had never funded gain-of-function research in Wuhan.

When Fauci returned to the senate committee last week, Paul confronted him with the words of Richard Ebright, a molecular biologist at Rutgers University and a longtime critic of gain-of-function studies, who told the conservative magazine National Review that Fauci’s testimony in May was “demonstrably false,” since, in Ebright’s opinion, the experiments at the Wuhan Institute, indirectly funded by the NIAID as part of a project to head off a pandemic, were “unequivocally” gain-of-function in nature. Fauci insisted that the biologist Paul cited was simply wrong, saying experts at the National Institutes of Health had evaluated the Wuhan project and concluded that the experiments there did not meet the criteria for gain-of-function research used by the United States government.

The exchange between Paul and Fauci got even more heated when the senator seemed to imply that this research funded by Fauci’s agency could have led to the development of SARS-CoV-2, the deadly coronavirus that causes Covid-19, in the Wuhan lab.

As Fauci correctly noted, that speculation was wildly misleading, since it was “molecularly impossible” for the type of coronavirus used in the pre-2017 experiments to have been manipulated in the lab to create SARS-CoV-2.

On that point, even some of the most outspoken critics of gain-of-function research on potential pandemic pathogens agree with Fauci. Kevin Esvelt, an MIT biologist who told PolitiFact in May that the experiments conducted in the Wuhan study should be considered gain-of-function also emphasized that those experiments “definitely did NOT lead to the creation of SARS-CoV-2.”

(Esvelt, who worries that viruses developed through gain-of-function experiments in a lab could one day be used as weapons, told “The Open Mind” on PBS in March that whether the virus that caused the Covid-19 pandemic came from an animal or came from a lab, “it was not designed to be a weapon — because anyone good enough to make this thing could make a more devastating weapon.”)

Paul was also rebuked in May by Marc Lipsitch, a microbiologist and professor of epidemiology at Harvard University who brought together hundreds of scientists and experts in law and ethics in 2014 to call for a moratorium on gain-of-function experiments that could create highly transmissible, novel strains of dangerous viruses in laboratories.

Lipsitch wrote in a Twitter thread that in his attack on Fauci in May, Paul had “FALSELY” claimed that the working group Lipsitch assembled had “characterized work at the Wuhan Institute of Virology as gain-of-function.” While he and many members of the working group “support proper investigation of SARS-CoV-2 origins including the lab leak hypothesis and continue to oppose many forms of GOF research,” he added, “it is just fabrication to say we have made any statement as a group about work in Wuhan.”

Fauci did not get a chance to explain during the hearing what the scientific basis was for the determination by NIAID biologists that the experiments conducted at the Wuhan Institute of Virology, described in a paper published in 2017, were not subject to a temporary pause on the funding of gain-of-function research imposed during the Obama administration in 2014, which was lifted in 2017 after Trump became president.

But in a statement provided to The Intercept on Monday, NIAID explained the reasoning behind its review of the experiments conducted at the Wuhan Institute on behalf of EcoHealth Alliance, a nonprofit in New York that works with researchers in China to study viruses that have the potential to jump from bats to humans. The agency wrote that its scientists had concluded the pre-2017 experiments in Wuhan were not barred by the temporary pause on gain-of-function research, “because they were not reasonably expected to increase transmissibility or virulence of these viruses in humans.”

“Under the grant, EcoHealth Alliance proposed research to create chimeric viruses by placing a small portion of newly identified, evolutionarily distant, bat coronaviruses into another well characterized bat coronavirus that has never been demonstrated to infect humans called WIV1,” NIAID wrote. “The purpose of this work was to examine whether the newly discovered viruses were able to use the human ACE2 receptor like WIV1 and other SARS-related coronaviruses already do. In the context of these experiments, this well-characterized bat coronavirus would be considered the parental strain against which the function of the new chimeric viruses would be assessed. With this comparison, the newly created chimeric viruses did not gain any function relative to the parental strain; the chimeric viruses did not replicate in cell culture any better than the parental WIV1. In addition, research that had been published in peer-reviewed scientific journals demonstrated that viruses similar to those proposed under the grant had reduced pathogenicity as compared to the parental viruses. For these reasons, it was not reasonably anticipated that the viruses involved in research under the grant would have enhanced pathogenicity and/or transmissibility in mammals via the respiratory route, and therefore did not meet the criteria for gain-of-function research described in the research funding pause.”

Update: Sept. 9, 2021
The Intercept has obtained documents that bolster the case made by Fauci’s critics that the NIH-funded experiment at Wuhan should properly be defined as gain-of-function research. But scientists consulted by The Intercept unanimously agree that the experiment described in the new documents could not have directly sparked the pandemic.