For His Accusers to Get Justice, Andrew Cuomo’s Impeachment Must Go On

The decision to halt Cuomo’s impeachment would be a blow to accountability — and leave the door open for Cuomo to return to politics. 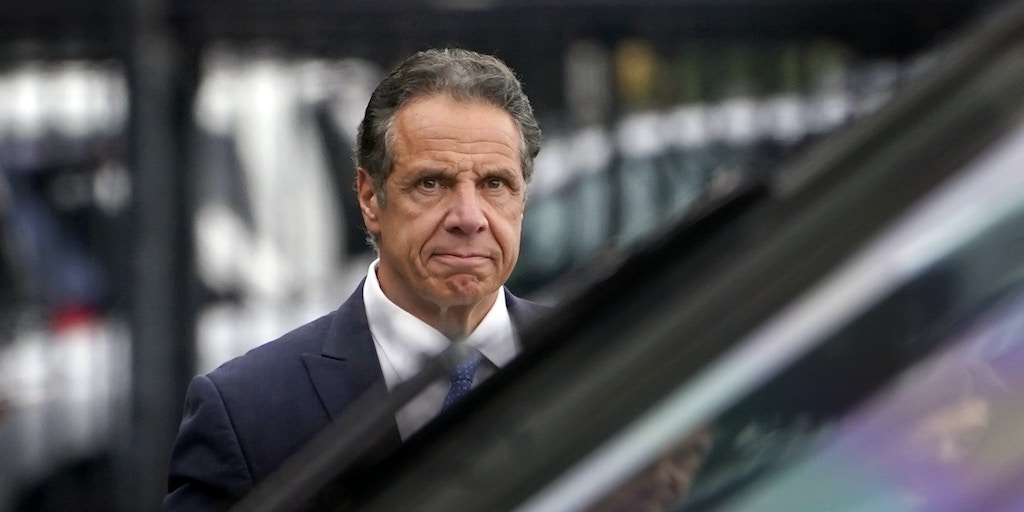 After announcing his resignation in New York, Gov. Andrew Cuomo prepares to board a helicopter on Aug. 10, 2021.

On Sunday afternoon, Charlotte Bennett, who accused New York Gov. Andrew Cuomo of sexual harassment, decried the decision by state lawmakers to halt impeachment investigations against Cuomo. Bennett, who had served as a health policy adviser to the governor and endured verbal sexual harassment and intimidation, said in a statement that a refusal to impeach was “the coward’s way out.”

There is indeed something particularly spineless to the way State Assembly Speaker Carl Heastie, a longtime Cuomo ally, presented the decision to halt the impeachment. On Friday afternoon, Heastie, to the surprise of many of his Democratic colleagues, said that impeachment could not proceed as a matter of New York constitutional law, since Cuomo had announced his resignation.

It was presented as an unassailable legal fact that the governor’s plan to step down nullified the possibility of a further impeachment: The assembly’s hands were tied and there would be no impeachment trial to reckon — in public, high-profile proceedings — with Cuomo’s abuses of power, sexual and otherwise, including his cover-up of nursing home Covid-19 deaths. Yet a number of legal scholars challenged the claim that nonimpeachment is a fait accompli under law, assailing Heastie’s reliance on narrow and expedient legal interpretation.

The New York legislature should undertake impeachment proceedings as a way to expose the enabling infrastructure of the governor’s wrongdoings.

The legislature backtracked on Monday, announcing amid criticisms that it would release a public report on the impeachment inquiry’s findings, but it’s not enough. For accountability, impeachment itself must go forward.

Cuomo’s accusers deserve better. The New York legislature should undertake impeachment proceedings as a way to expose the enabling of the governor and his allies’ wrongdoings. Successful impeachment would also foreclose the possibility of the unrepentant Cuomo seeking future office.

“We took the enormous risk of speaking out about the abuse and harassment we experienced,” said Bennett in her statement, adding that a damning report from New York’s attorney general “corroborated our allegations and determined that the governor broke state and federal law.”

Democratic State Assembly Member Yuh-Line Niou echoed Bennett’s anger in her own statement. “I am heartbroken, I am sickened, and I am disgusted,” she said, adding that the state had already put much in the way of resources into the investigation.

State Assembly Member Ron Kim — who spoke out about Cuomo’s handling of nursing homes in the pandemic and faced the governor’s abusive wrath in return — has already challenged the claim that impeachment is no longer possible. Over the weekend, he posted a memo on Twitter from legal scholar Robert Hockett, which described the reasoning to not impeach Cuomo as “regrettably short on both legal authority and persuasive authority.”

Kim added in a tweet that there are possible legal grounds for impeachment even once Cuomo has left office: “‘Removing’ Cuomo does not simply mean the literal removal of Cuomo, the man, but removal, disqualification, and condemnation of every criminality he has done and stood for to protect the integrity of the state government and the people it is supposed to protect.”

Even without an impeachment trial, Cuomo faces a host of federal, state, and local investigations into his misuse of public resources in the writing of his 2020 pandemic book, the underreporting of Covid-19 deaths in nursing homes, and sexual misconduct allegations. An executive assistant to Cuomo who has said that the governor reached under her blouse and groped her filed a criminal complaint, though there’s little assurance that criminal charges will follow.

An impeachment trial, however, would see lawmakers take the burden of seeking accountability off the shoulders of individual victims and place it within the very halls of power that enabled abuse to flourish. An impeachment trial would at the very least provide an opportunity for a thoroughgoing reckoning in Albany. Cuomo should not be left to face atomized legal battles in unaccountable obscurity.

The governor has already framed his resignation — and thus presumed evasion of impeachment — as an act of valor and sacrifice. With typical hubris, Cuomo told New York magazine in an interview, “I’m not gonna drag the state through the mud, through a three-month, four-month impeachment, and then win, and have made the State Legislature and the state government look like a ship of fools, when everything I’ve done all my life was for the exact opposite.”

Cuomo’s incredulous faith in his own innocence should be evidence enough that he could dodge accountability and again seek political power. Yet the idea that we’d need more evidence of Cuomo’s patriarchal megalomania is itself absurd. It could be said that Cuomo’s abusive mode of governance, corruption, and cruel austerity politics should have led to his removal many years ago. In this sense, we should not need an impeachment trial to force a shift in New York politics — a shift already building with the election of left-wing lawmakers.

It could be said that Cuomo’s abusive mode of governance, corruption, and cruel austerity politics should have led to his removal many years ago.

The fact that it took the attorney general’s expansive report to finally fell Cuomo is grim evidence that politics in the state have not, and still do not, readily bend toward the arc of progress. Instead, monied interests remain entrenched. As law professor Zephyr Teachout, who unsuccessfully ran for governor against Cuomo in 2014, asked last week in The Nation, “[W]hy was the AG report needed after 11 years of credible public reporting on his corruption scandals and his lies?”

The problem, she noted, was in part the extraordinary and unaccountable power vested in the executive. “The first step toward that transformation is for the Legislature to proceed with his impeachment,” Teachout wrote. “New Yorkers need to learn not just what Cuomo did but also how he was able to wield power to keep so many people silent and afraid—so we can avoid being back here again.”

The State Assembly’s readiness to hide behind shaky legal grounds to deem impeachment a nonstarter — allowing the governor to depart on his own terms — sets a troubling tone from an institution alleging to seek systematic change.