U.S. Drone Strike in Kabul Killed a Family — and Began a New Chapter of the War

Though U.S. forces are leaving Afghanistan, the war could continue with remotely controlled drone strikes — and even less accountability. 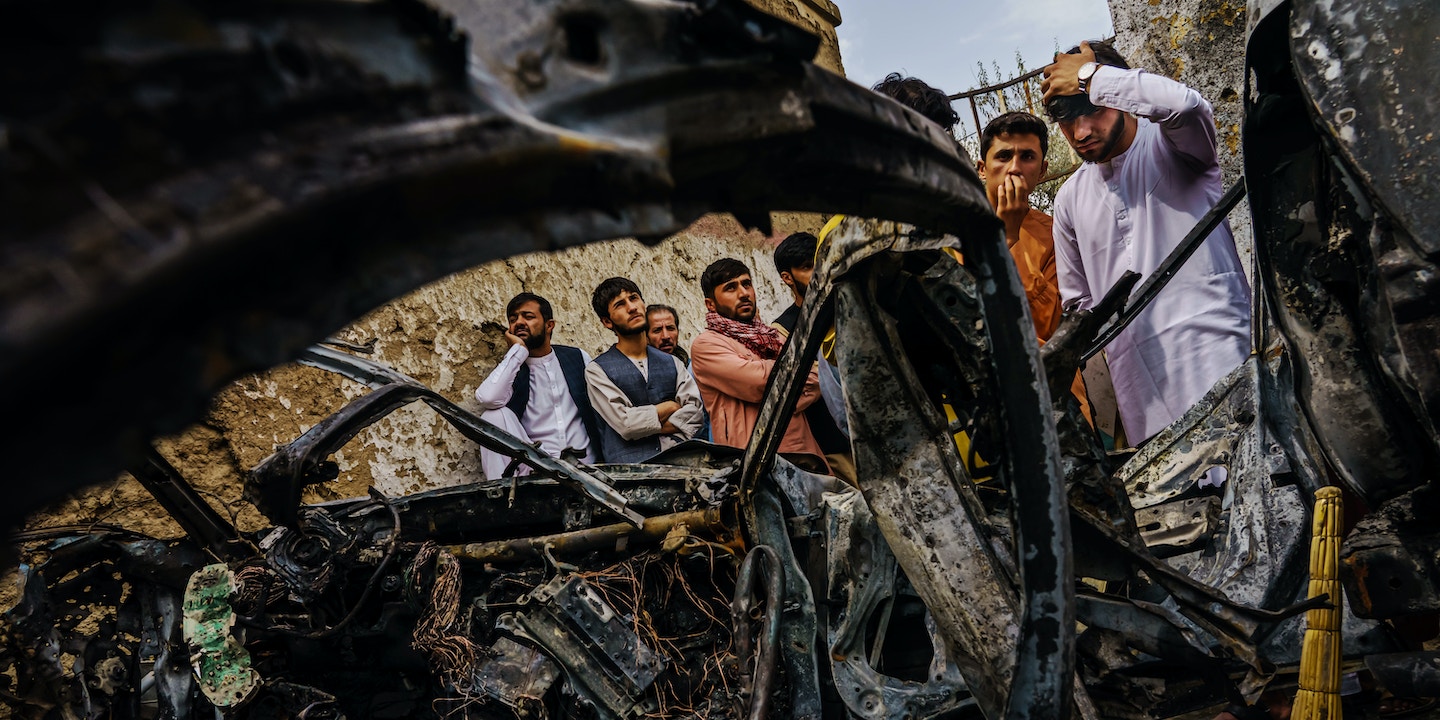 A Sunday drone strike in Kabul, Afghanistan, initially claimed by U.S. officials to have destroyed a car packed with “multiple suicide bombers,” reportedly killed 10 civilians from one family, including several children.

The drone strike that hit Khwaja Burgha, a working-class residential neighborhood in Kabul, was said to have killed numerous members of the Ahmadi family, with the youngest alleged victim being a 2-year-old girl. Morgue footage shared on social media showed the burned bodies of several children, as well as photos of the victims before their deaths. One of the dead, according to members of the Ahmadi family who spoke to reporters, was a former Afghan military officer who had served as a contractor for U.S. forces, as well as a worker at a charity organization.

“The Americans said the airstrike killed Daesh members,” a neighbor of the family angrily told reporters after the strike, referring to the Islamic State. “Where is Daesh here? Were these children Daesh?”

The Defense Department and other arms of the Biden administration continued to describe the drone attack as a “successful” strike against the militant group Islamic State-Khorasan, or ISIS-K, which had taken responsibility for a suicide bombing at the Kabul airport. As reports confirmed that an innocent family had been killed, Pentagon spokesperson John Kirby said that the Department of Defense is “not in a position to dispute” reports that civilians were killed, stating that the incident would be investigated.

The Kabul drone strike is just one in a long string of attacks in Afghanistan by U.S. forces and their proxies reported to have killed large numbers of civilians. Past attacks have hit families traveling in cars and buses, wedding parties, hospitals filled with patients, and groups of farmers working in fields. While the withdrawal of American troops can be described as the end to the war in Afghanistan, the Kabul strike shows how the war may simply enter a new chapter, with the U.S. striking targets with aircraft launched from faraway drone bases.

Critics of civilian casualties in the U.S. war have pointed to the lack of serious investigations on the ground into the deaths — accountability that will be even harder to come by in a remote war.

“The drone program is opaque, with extremely limited accountability for anyone involved.”

“In my experience, the bar for thorough military investigation has been so high as to discount a majority of credible incidents. What investigations do take place are neither consistent nor rigorous,” said Nick McDonell, author of “The Bodies in Person: An Account of Civilian Casualties in American Wars,” an analysis of the impact of the U.S. air wars in the Middle East. “At the same time, the military has repeatedly suppressed information on civilian casualties. The drone program is opaque, with extremely limited accountability for anyone involved.”

What separated the recent Kabul drone strike from the long pattern of reported civilian deaths was the level of immediate attention and outrage it has generated. The U.S. war in Afghanistan has mostly been waged in rural areas, away from the attention of international media. Kabul, on the other hand, is the highly populated capital and the country’s center for expatriates, nongovernmental organizations, and both Afghan as well as international journalists.

When the strike was reported, immediate video footage of the civilians who were killed in the attack began to circulate, and even international journalists were able to quickly access the attack site.

In contrast, many past strikes have gone under the radar — and continue to do so. A retaliatory strike that came immediately after the recent terrorist attack at Hamid Karzai International Airport hit rural eastern Afghanistan, allegedly killing two people: an ISIS “planner” and a “facilitator,” according to the Defense Department.

At the press briefing Monday, Kirby declined to share further information about the identities of the two people allegedly killed in that prior attack. Other than dedicated Afghanistan observers, few took notice. Journalists and rights advocates have so far not reported any details of on-the-ground investigations or if such investigations are even possible.

The opaque nature of the war in Afghanistan has made calculating accurate death tolls from U.S. operations difficult — a challenge that has been compounded by the military’s own long-standing refusal to compile statistics and verify information about who is killed in its strikes. The secretive nature of the war on terror in general, across all its various theaters of operation, coupled with military practices that devote little attention to strike investigations, makes assessing civilian impact nearly impossible.

The Pentagon initially released a statement celebrating Sunday’s strike in Kabul’s Khwaja Burgha neighborhood for having stopped what it claimed was another imminent terrorist threat against the airport. After local journalists and activists began surfacing harrowing footage of civilians killed, however, the Pentagon put out a press release stating that “it is unclear what may have happened” in the strike, claiming that there were secondary explosions from the bombing that suggested the presence of explosives on the ground. (The White House cited this explanation in its own statements on the allegations of civilian casualties.)

The Pentagon often releases footage of its airstrikes, with the intention of advertising successful attacks against alleged terrorists. In the past, some videos have been released describing successful strikes that were later revealed to have hit civilian targets. The Pentagon declined to comment to The Intercept as to whether it would release footage of the Khwaja Burgha strike in order to verify the claimed presence of secondary explosions.

The military’s own promises to investigate civilian casualty incidents have resulted in little meaningful accountability in the past.

According to its standard practices, the military does not conduct site visits to learn who was killed in its airstrikes, leaving the grueling work of finding out who died and why to independent monitoring organizations and investigative journalists who operate with far fewer resources than the Pentagon. The Washington Post reported last year that as airstrikes ramped up in the final years of the Afghanistan War, the number of strikes investigated by the military for civilian casualties plummeted. Few outside the areas impacted would have taken notice of many of the strikes at all, let alone the absence of investigations.

“The failure to properly acknowledge, investigate, or compensate civilian deaths and injuries is one constant of U.S. airstrikes.”

In those cases in which the military did launch its own inquiries, the findings were viewed with skepticism. “These investigations are nothing but advertisements to the media,” a local council official from Helmand Province in Afghanistan told the Post. “They have no mercy. They only see targets to kill.”

The Kabul airstrike, though, generated an outpouring of grief and anger among many Afghans, already reeling from the Taliban takeover of their country following the collapse of the U.S.-backed central government. Though the Pentagon has promised to hold itself accountable for such incidents, experts on the drone war say that there is little reason based on past practice to expect meaningful justice for the victims.

“The failure to properly acknowledge, investigate, or compensate civilian deaths and injuries is one constant of U.S. airstrikes, whether in recognized wars like Afghanistan, or outside of them, like in Somalia,” said Hina Shamsi, director of the American Civil Liberties Union’s National Security Project. “The specific reasons and the agencies involved in those failures may differ in each context — and over 20 years we’ve repeatedly seen legal and policy debates and promises by the U.S. government to do better. But that’s of little comfort to the civilians on the receiving end of American lethal force who suffer terrible harm with little or no transparency and accountability.”