With Texas all but banning abortion and endorsing a repugnant vigilantism, we need to look for other ways to protect access to abortion. Reproductive rights advocates, right, face off against anti-abortion demonstrators, left, during a rally at the Supreme Court on March 2, 2016, as justices hear a case concerning a Texas law regulating abortion clinics and providers.

As of Wednesday morning, abortion has, for all intents and purposes, been outlawed in the state of Texas. The most draconian anti-abortion law in the nation to date is now in effect. Senate Bill 8, which bans abortion after six weeks of pregnancy — long before many people know that they’re pregnant — passed into law as the clock struck midnight. It includes no exceptions for rape or incest.

The abortion ban was not instated in dramatic fashion by the far-right Supreme Court. There was no order to once and for all overturn Roe v. Wade — although such a ruling does loom in a case the court ominously has agreed to hear. Rather, S.B. 8 is now law because of pointed inaction by conservative justices. The Supreme Court knew the law was going into effect Wednesday, was asked to intervene by reproductive rights supporters, and chose not to.

The court let the ban become law — telling us everything we need to know about a future for reproductive rights if we rely on the courts to defend them.

On Friday, the 5th U.S. Circuit Court of Appeals canceled a hearing on the law’s constitutionality. Abortion providers were thus forced to ask the Supreme Court, with its expressly anti-abortion majority, for an injunction in an emergency filing Monday. Instead, the court let the ban become law — telling us everything we need to know about a future for reproductive rights if we rely on the courts to defend them.

Around 90 percent of abortion care in Texas takes place at least six weeks into pregnancy; all those abortions would now be in violation of the law, and anyone involved in helping people access these reproductive rights could face lawsuits. It is of the utmost significance that Texas has enacted an abortion ban with Roe still on the books — a devastating reminder that while upholding Roe is crucial, conservatives have long known that the decimation of reproductive rights never depended on overturning one Supreme Court decision.

As The Intercept’s Jordan Smith reported in July, S.B. 8 is designed to evade federal court challenges by letting anyone, anywhere act as deputies to file suits against so-called abettors of S.B. 8 violations, even based on mere speculation. Unlike most civil litigation, the plaintiff need not even prove that they have been harmed in any way. And it is not only abortion providers at risk, but also literally any person who could be deemed to “abet” the act — including an Uber driver who takes a person to an abortion appointment, or a therapist or pastor who has counseled a person on ending a pregnancy.

Private individuals, rather than state authorities, will bring these cases — a free-for-all for anti-abortion crusaders. As Smith noted, the law makes bounty hunters of anti-abortion vigilantes, promising $10,000 for every abortion performed in violation of the law to those who bring successful suits. 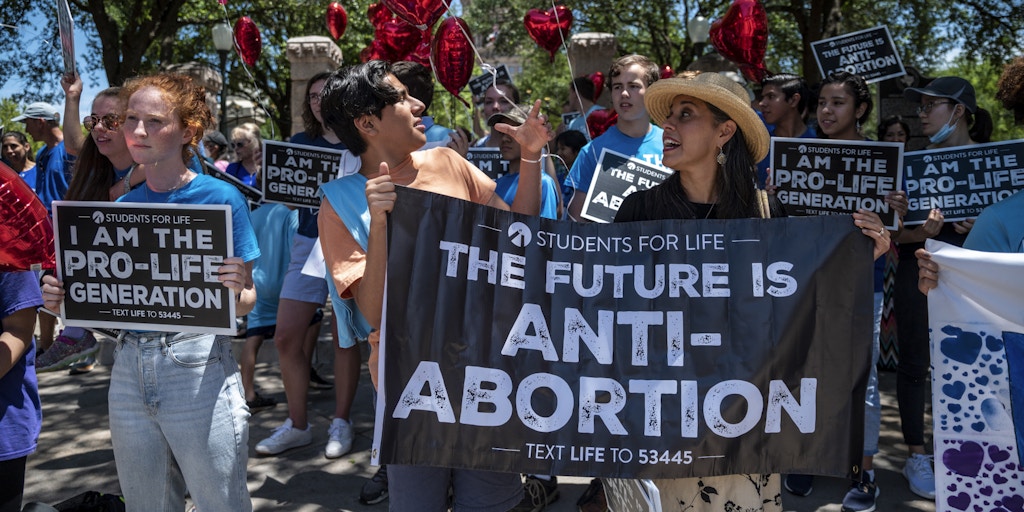 Anti-abortion demonstrators protest outside the Texas Capitol on May 29, 2021, in Austin, Texas.

The Texas law came into being like a mutated virus, adapting from previous anti-abortion bills that have failed to bypass the minimal defenses federal law has afforded abortion-seekers and providers since 1973 when Roe was decided. S.B. 8 is devious: Similar bans enacted in 11 states have been blocked by federal courts, but the Texas law is specifically drafted to make it difficult to challenge in court. S.B. 8 was designed, in other words, to circumvent constitutional protections and undo over 50 years of legal precedent upholding the right to abortion before fetal viability.

An emergency application from abortion providers seeking to block the law remains pending before the Supreme Court. The conservative majority, however, has already indicated where it stands by allowing the law to come into effect in the first place.

As has been the case in conservative states where abortion is de facto inaccessible — Mississippi, Missouri, North Dakota, South Dakota, and Wyoming — Texas has now gone further than any other state in forcing people to carry a fetus to term and give birth against their wills.

Poor people of color will, as ever, suffer the most under a medical regime in which reproductive health services are already scant. Maternal morbidity rates among Black women are disproportionately high to an extreme degree. Texas already has one of the highest maternal mortality rates in the nation, along with, more generally, a medical system rife with racist disparities. Anti-abortion laws sit in tandem with so much of the right-wing necropolitical agenda and its all-out assault against Black, brown, Indigenous, queer, and trans people.

We can and should fight for the law to be on our side. In Texas and beyond, however, it’s not.

It’s a grim reality that those of us fighting for basic health care rights, which include expansive abortion access for all who seek it, must learn something from the conservative tactical playbook. Yes, their sights are set on overturning Roe, but conservatives have fought on numerous fronts to enact their patriarchal agenda. Liberal appeals to the sanctity of Roe and other legal precedents alone are insufficient in this battle. Reproductive rights activists on the front lines have long known this.

We must be willing to act collectively to share resources and enable those who need to cross state lines for abortions to do so. We must get behind the underground networks that make abortion materials available through whatever routes possible. And we must be willing to throw our full support behind those abortion providers and enablers acting against the law. We can and should fight for the law to be on our side. In Texas and beyond, however, it’s not. The abortion-seekers, providers, and other allies who may need to break the law for reproductive justice deserve our full solidarity.