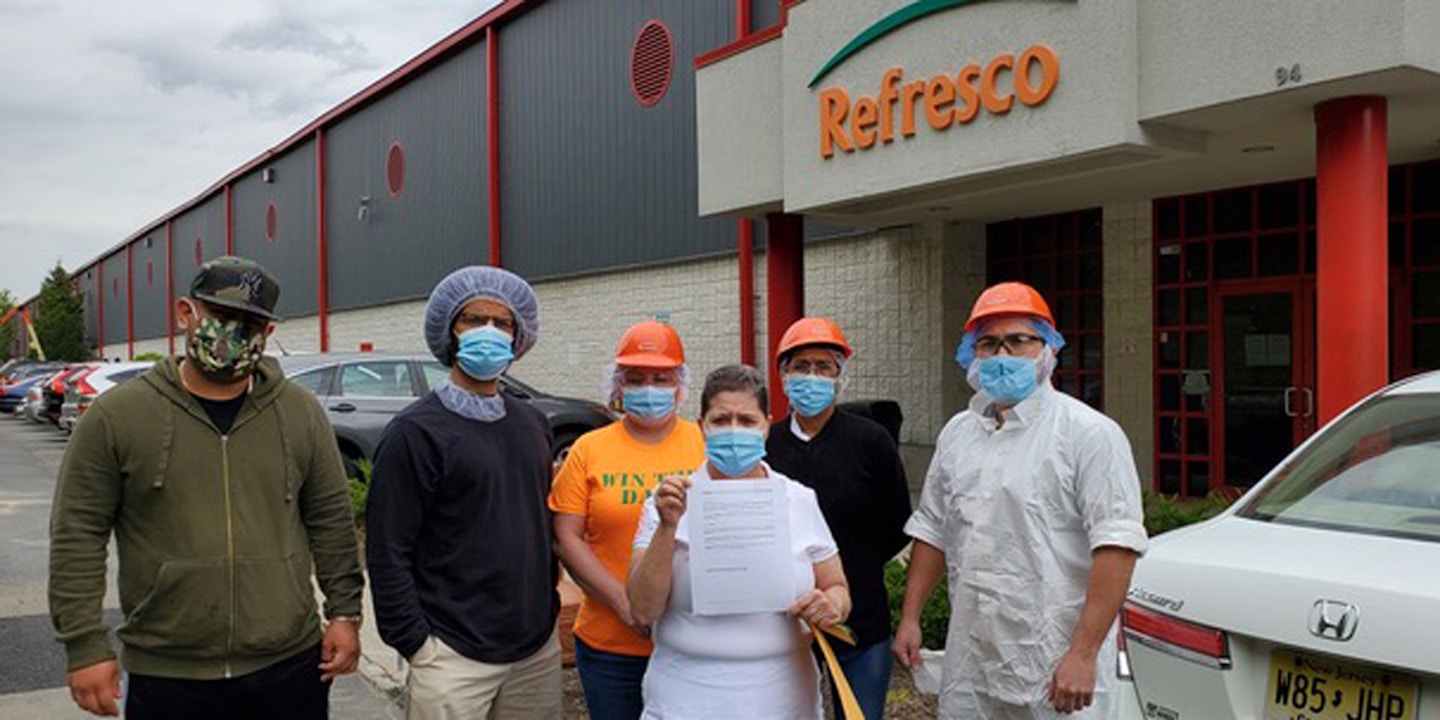 When 250 Refresco workers at a bottling plant in Wharton, New Jersey, won a union election at the end of June, organizer Anthony Sanchez thought he and his co-workers would soon start negotiating their contract.

But that hasn’t happened. Instead, Refresco, known as the world’s largest independent bottler, launched an aggressive legal operation, employing a former high-ranking official with the National Labor Relations Board to delay certification.

“Things are going to slow because of Refresco’s tricks,” referring to aggressive legal tactics used by the firm “to delay the process for us to get certification of the union and to start negotiating a contract,” said Sanchez, who led the union campaign and has worked at the plant since 2006. “They lost the election and they’re playing games with appealing the decision to delay the process.”

Union organizers say some of their members had accused Refresco managers of interrogating workers as to their position on the union. Federal labor law does not allow company management to ask employees how they voted. Refresco, in a comment to The Intercept, said, “As it has done throughout this election process, Refresco intends to follow all the legal rules governing its behavior in connection with and arising out of the Union’s efforts to organize employees at its Wharton, New Jersey facility. This includes, but is not limited to, neither retaliating against nor rewarding employees based on their union sympathies or support.” Referesco did not answer specific questions as they related to either the alleged interrogations or their actions in opposition to the union drive.

Refresco also hired the anti-union firm Cruz & Associates (notably hired by President Donald Trump to oppose unions in his casinos) to aggressively campaign against the union inside of the plant, with the union reporting that the company held so-called captive audience meetings to advocate against the union “nonstop” and papered the plant with anti-union literature. As the company litigates the election at the National Labor Relations Board, it has retained a former high-ranking NLRB official, Jack Toner, who works for the prominent law firm Seyfarth Shaw.

“The company’s hope is that workers will start getting discouraged,” making it more difficult for the union to effectively mobilize for a first contract, said John Ocampo, an organizer with the United Electrical Workers, which worked with the Refresco workers — most of whom are immigrants — to deliver one of the largest blue-collar union victories since the start of the pandemic.

Unions win about 70 percent of NLRB-run union elections, but the road to a first contract is often arduous, with as much as 44 percent of victorious unions failing to win a contract.

In addition to spotlighting typical management anti-union tactics (as alleged by the union), the Refresco saga also highlights the rise of the private equity ownership model. Refresco is a subsidiary of Paris-based private equity firm PAI Partners, which counts numerous U.S. public pension funds among its investors, including the Florida state pension, the Massachusetts state pension, and the Pennsylvania public school pension, as well as the British Columbia public employees pension fund.

Essentially, then, the unionized teachers, firefighters, and other public-sector workers who belong to those pension funds are invested in Refresco’s anti-union campaign, and potentially violating U.S. labor law.

PAI Partners and the British Columbia pension fund took over Refresco in March 2018. Bloomberg reported in August that they are exploring an initial public offering of Refresco on the U.S. stock exchange.

“Unfortunately, as a result of decades of right-wing offenses on the right of working people to retirement security, public pension funds have felt the need to commit workers’ capital to companies that actively undermine workers’ interests,” said Samir Sonti, a professor at the CUNY School of Labor and Urban Studies. “This model has many contradictions, but one of the most problematic is how it prevents [public pension fund] investment staff from recognizing that wage growth for all workers is in the interest of their beneficiaries. An economy that is working for everyone and generating strong public revenues is good for the beneficiaries of public pension funds.”

“Too often, a private equity takeover comes with outsize returns for its executives and layoffs or pay cuts for workers.”

Anastasia Christman, the Worker Power program director at the National Employment Law Project, added in a statement that “too often, a private equity takeover comes with outsize returns for its executives and layoffs or pay cuts for workers.”

About 8.8 million workers — or roughly 5 percent of the national workforce — work for portfolio companies of private equity firms in the U.S. Private equity is known for colossal executive compensation, little regulation, and eager public pension fund and endowment investors.

Unions like UNITE HERE and the American Federation of Teachers have launched innovative efforts seeking to hold private equity firms and their hedge fund siblings accountable via their pension fund investors. The Private Equity Stakeholder Project, an advocacy organization, seeks to work as a clearinghouse for efforts to hold the industry accountable for worker and human rights violations.

“Private equity-owned companies employ millions of workers in the United States, and the number continues to grow as private equity firms are acquiring additional companies at a record pace,” said Private Equity Stakeholder Project Executive Director Jim Baker in a recent statement. “At the expense of American families and communities, private equity firms have been focused on growing cash flow.”

Indeed, private equity firms Warburg Pincus (where former Obama Treasury Secretary Tim Geithner is president) and Apollo Global Management (whose founder Leon Black stepped down in March as he was facing scrutiny for his $158 million in payments to Jeffrey Epstein) are respectively the fourth- and fifth-largest U.S.-based employers, behind household names Walmart, Amazon, and FedEx.

Other unions have faced issues with subsidiaries of PAI Partners. UNITE HERE Local 11 members in Los Angeles have had a number of disputes with airport concessionaire Areas, another subsidiary of PAI Partners. The dispute has led to two trustees of the Los Angeles County employees’ pension fund LACERA, which has invested in PAI in the past, to call for the pension to make no additional investments in the French private equity firm.

Canadian public pension funds have increasingly turned to direct investment in private equity-owned companies, as opposed to investment through a third-party money manager, as is the norm in the U.S. It is unclear whether either the Canadian or American approach to private equity is a good deal; research suggests that the fees for private equity are exponentially higher than for ordinary index funds, as is the risk, but returns for the industry roughly match stock market returns.

The Canadian approach, however, has brought compensation for that country’s pension fund executives significantly outpacing their American counterparts. The CEO of the British Columbia fund, a former JPMorgan executive named Gordon Fyfe, made $3 million paid out from the fund in 2018. The Canadian Labour Congress union federation has described the pay for Canadian pension fund CEOs as “alarming.”

Reached for comment by The Intercept, the British Columbia pension fund, BCI, said that “BCI is an investment manager that holds equity interests in a variety of companies. We do not comment on the operational matters of our specific portfolio companies.” PAI Partners did not respond to a request for comment.

Meanwhile, the Refresco workers will keep pushing forward on their path to a decent first contract — an uphill battle given how powerful their opposition is. Irma Carrillo, a Venezuelan immigrant who has worked for three years at the plant, said they just need to outlast Refresco’s anti-union tactics.

“The company doesn’t want to accept our victory,” she said.