On September 19, a New York City man named Isa Abdul Karim became the 11th person to die on Rikers Island, the city’s notorious jail complex, in less than a year.

Amid fresh alarm about inhumane conditions at the jails, Karim’s death underscored the reality that Rikers continues to be a place where people are exposed to extreme danger.

A week ago, medical officials warned publicly that the jail system on Rikers Island cannot guarantee the health and safety of the people locked up there, calling for emergency action to empty the jails and take them out of city control. Public officials, under pressure, enacted incremental long-term changes and bickered about whose responsibility it might be to take more immediate action.

The story of the 41-year-old’s death in custody sits at the intersection of the manifold crises on Rikers. Karim experienced the unchecked violence of Rikers and the vindictive, self-protecting fraternity of jail guards when he was beaten and punitively denied medical care during a previous stay on the island, according to an outstanding lawsuit.

“Officers are spraying pepper spray all the time. Nobody’s wearing a mask, and they’re all in an enclosed dank hallway. No one’s receiving medical care in there.”

A wheelchair user with underlying medical conditions, Karim was subjected to the harsh deprivations of the current conditions on Rikers. He spent 10 days on an intake unit at Otis Bantum Correctional Center, held in crowded pens with as many as a dozen people in each cage, spending the entire period in his wheelchair because of the lack of bunks.

“The pens are a crowded place with a lot violence and assaults and self-harm,” said a medical staff member working on Rikers and familiar with the facility, who asked for anonymity out of fear of official reprisal. “Officers are spraying pepper spray all the time. Nobody’s wearing a mask, and they’re all in an enclosed dank hallway. No one’s receiving medical care in there.”

Karim contracted Covid-19 in the intake pens and was taken to a quarantine facility where he received treatment and appeared to recover. Discharged and assigned to a housing unit, Karim suddenly experienced acute shortness of breath, became unconscious, and collapsed. He received CPR, but to no avail, and he was pronounced dead even before an ambulance arrived. A full autopsy has yet to be completed, and the official cause of death is unknown, but New York City Department of Correction Commissioner Vincent Schiraldi said September 20 that Karim’s death “appears be natural.”

The medical staff member said that while the details of Karim’s death remain uncertain, questions about his precise cause of death should not obscure the basic truth that Rikers, especially now, is itself a serious health hazard. “This guy had a really stressful month,” the staff member said. “At worst, he died from something related to Covid which he got in the pens. At best, jail stressed his body very intensely and he had an acute event that killed him.”

In the wake of Karim’s death, Mayor Bill de Blasio announced a new policy requiring that people held on Rikers not be kept in intake units longer than 24 hours.

Karim was subjected to the ordeal of detention even though in most states in the country he would never have been incarcerated. He was brought to Rikers after being arrested August 18 on an old technical parole violation warrant, though his parole had ended in June. New York has for years been virtually unique in the degree to which it reincarcerates people on parole for incidents as minor as addiction relapse, failing to be home by curfew, or missing an appointment with a parole officer.

Karim’s status — jailed on a technical violation of his parole — is precisely the subject covered by the Less is More Act, signed into law by New York Gov. Kathy Hochul September 17, under pressure from advocates for incarcerated people during the mounting crisis on Rikers. Hochul’s actions capped the amount of time people can be held on technical violations at 30 days, but at the time of her order, Karim had been in custody only 29 days, missing the cutoff. The state Department of Corrections and Community Supervision, which runs the parole system in New York, said Karim’s case would have been reviewed next week. Instead, he died on Sunday, on his 32nd day of being locked up, according to the Department of Correction’s Inmate Lookup Service. 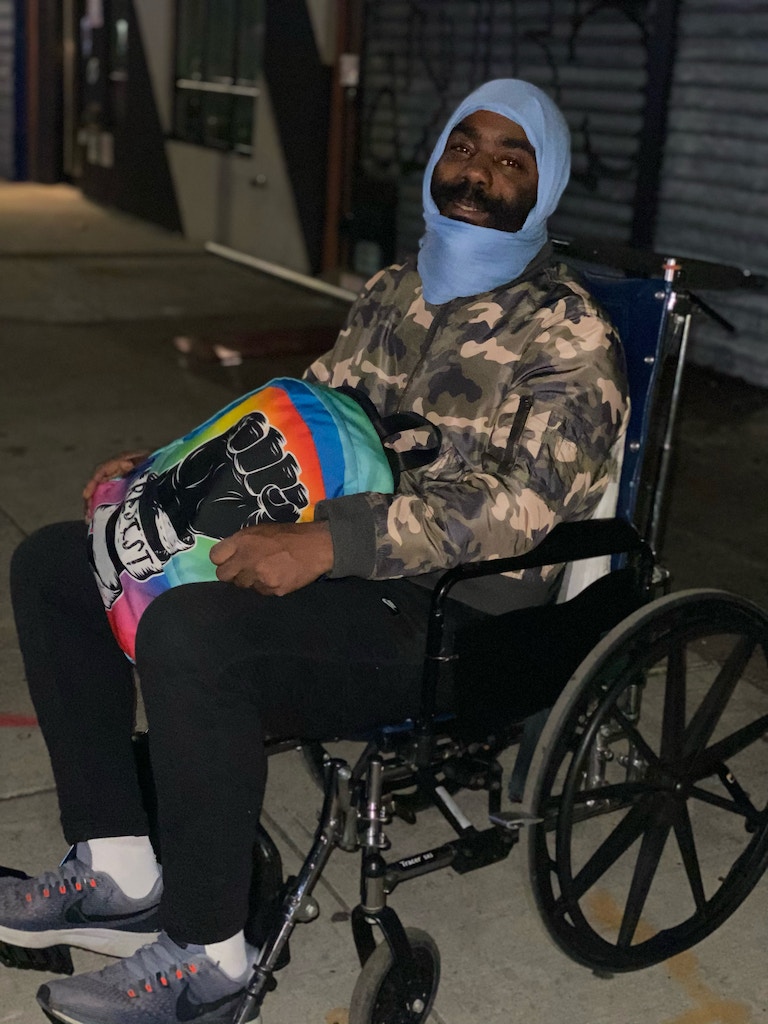 Karim’s cousin, Papa Samb, described him as a devout Muslim who was active in his local mosque. Karim, whose family came from Senegal, was close with Samb’s young son, to whom he taught verses of the Quran.

“They were amazingly close,” Samb said. “Just this morning he asked for Isa, and I had to lie to him and tell him Isa was not feeling well.”

Samb said Karim was arrested on his parole warrant from the hospital bed where he was recovering from being stabbed on the street.

“He was going to sue Rikers Island for all of the mistreatment. He kept telling me, ‘They don’t want me to come out alive.’”

“He was going to sue Rikers Island for all of the mistreatment,” Samb said. “He kept telling me, ‘They don’t want me to come out alive’ — because he was writing everybody’s name down, all the information of what they did to him.”

Samb said he had been speaking with Karim on the phone several times a day, praying with him, since he was put on Rikers. “Just yesterday, I was telling him to stay strong, bro — ‘You’re going to come out soon.’ We prayed together on the phone. We laughed like nothing was happening. He was a joking person. He was strong. I know him as a strong man.”

Karim described difficulty getting regular meals, Samb said: “I sent him $40 yesterday to get some food. I was going to send him $40 again today.”

Samb said he has still not had any communication with officials on Rikers and that he learned of his cousin’s death from the wife of a man who is also being held on Karim’s unit. “Her husband, an inmate in there, called her and let her know that he’d been calling out for help and they weren’t helping him,” Samb said. “He just stopped breathing. That was the last of it.”

For now, Samb said, he is preoccupied with details. “He was planning to do a lot of things when he came out,” Samb said. “I want to make sure he gets the right treatment, the right burial. I want to send him to Africa. He wanted to go back to Senegal. His dream was to die there. Unfortunately, it happened here.”

Karim’s second lockup on Rikers ended with his death, but his first visit — in January and February 2016, while he was awaiting trial on a nonviolent drug charge — was also brutal, according to a lawsuit he filed afterward.

Karim had multiple mental health issues, including schizophrenia, according to his suit, and a history of suicide attempts. For these reasons, Department of Correction psychologists had recommended that he not be housed in a single cell. A guard working on Karim’s dorm unit, however, took a dislike to him and harassed him, the suit alleged. When Karim lodged an official complaint about the guard, the suit said, the official retaliated and arranged for Karim to be transferred, against medical advice, to a single cell. There, Karim’s mental health deteriorated rapidly, and he attempted to kill himself by eating batteries.

He was transferred to a jail clinic, but a corrections officer there who was friends with the guard Karim had complained about told Karim he was going to make him pay for the complaint. According to the suit, the guard kept Karim on the clinic’s intake unit for six days, in a cell with no bed, sink, or toilet, only a metal chair. Karim was forced to urinate and defecate in empty milk cartons left for him by other people held on the unit.

While on the unit, Karim was beaten by another man he briefly shared a cell with and was ordered transferred to Bellevue Hospital for treatment. Continuing their retribution, guards kept him in his cell the day he was scheduled to board the Bellevue bus, according to his complaint, and he did not receive treatment for his injuries or for the batteries he had swallowed, which were now painfully lodged in his rectum.

The Department of Correction did not immediately respond to questions. The guards named in Karim’s suit have denied his allegations.

Eventually Karim was sentenced on his drug charges and served 11 months in prison. On his release, he stayed for a time at the Fortune Society, an organization that offers housing, services, and community to New Yorkers who have been incarcerated.

“He died horribly, and he never should have been locked up. We’re seeing people in the land of Covid jammed into intake cells and the showers for weeks with no medical help.”

“We’re heartbroken,” said JoAnne Page, executive director and CEO of the Fortune Society. “This is someone we cared about. He died horribly, and he never should have been locked up. We’re seeing people in the land of Covid jammed into intake cells and the showers for weeks with no medical help. I’ve never seen anything like this. The tip of the iceberg is what happened in Mr. Karim’s case.”

Karim’s lawsuit from his first stay on Rikers was still pending when he died during his second.

While prison guards have complained that the current crisis on Rikers is caused by staffing issues, leading to calls from union leadership for more guards, Karim’s ordeal tells a different story. For his lawyer in the lawsuit, Leo Glickman, Karim’s suffering on Rikers across two different imprisonments carries a tragic and clear lesson. “He was abused and neglected when Rikers Island was at full employment, and now he was abused and neglected while few are employed there,” Glickman said. “The answer is obvious. Decarcerate.”