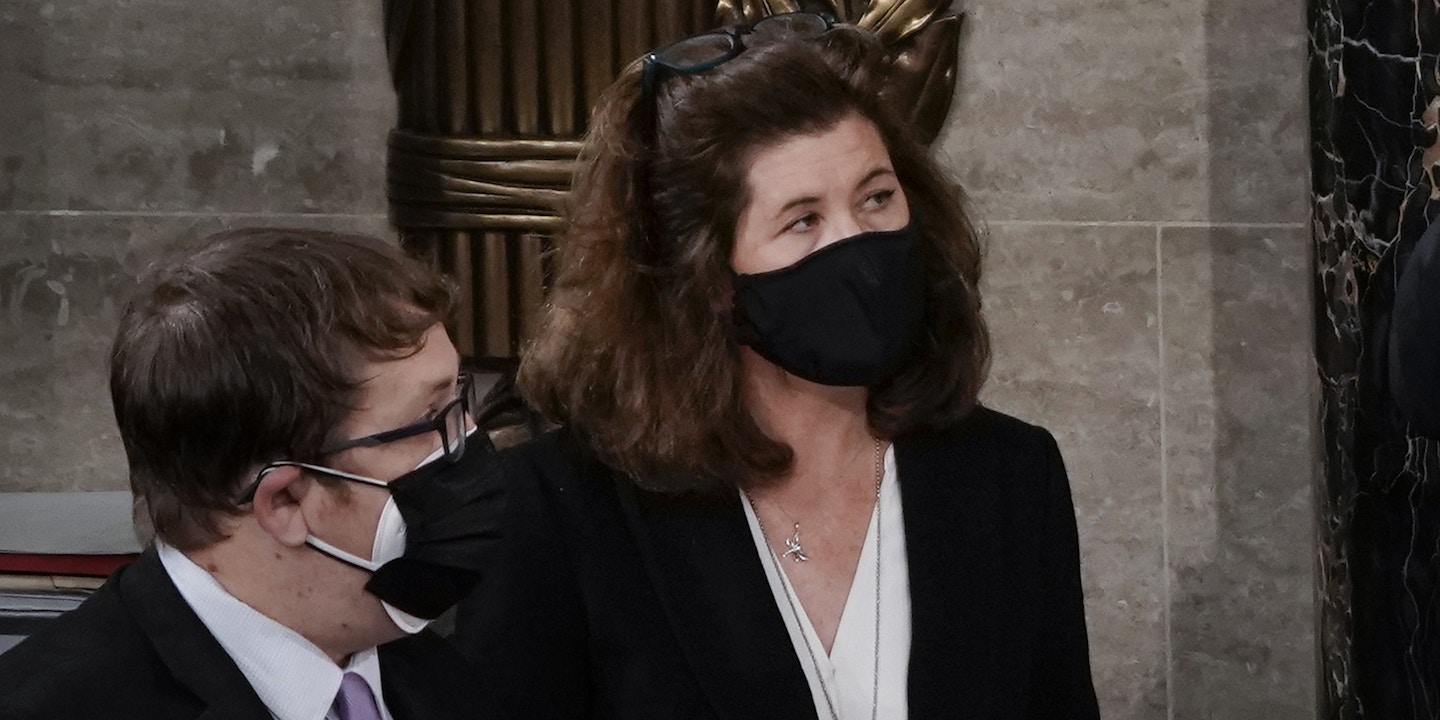 Senate Parliamentarian Elizabeth MacDonough actively organized against Democratic efforts to reform the filibuster throughout 2013, working closely with a bipartisan group of senators hoping to stave off the rules change, MacDonough told a law school audience during a 2018 commencement address at Vermont Law School.

By 2013, Senate Democrats faced a long backlog of judicial and executive nominees, with Senate Minority Leader Mitch McConnell thwarting the party’s efforts to confirm the Obama administration’s nominees at every turn. Outside of a few holdouts, Democrats in the Senate were pushing to eliminate the filibuster on judicial and executive appointments below the Supreme Court level. MacDonough played a highly political role in the intense dispute, she recounted.

MacDonough said in her commencement speech that while her nominal job was to assist the elected senators in the body, she felt her true allegiance was to the institution of the Senate, which is cloaked in a heavily contested mythology. “I represent the interests of my unseen client, the institution of the Senate itself. While serving its hundred members on a day-to-day basis, I still represent the Senate,” she said.

“It was the protection of the Senate’s rules and precedents that brought me into conflict with the Senate majority back in 2013 when talk of overturning the Senate’s cloture rule for nominations by what is called ‘the nuclear option’ was revived,” she continued, referring to the parliamentary procedure that lets the Senate override a standing rule by simple majority. “It was my duty to advocate for preservation of that rule and in doing so, I worked with all the gangs.”

The term “gang” is used in the Senate to describe an ad hoc working group of senators, generally from both parties, who’ve formed a group on a temporary basis with a particular goal in mind. A Gang of Six formed to hash out health care reform in 2009, for instance, and a Gang of 10 worked on the recent bipartisan infrastructure plan in the Senate. In 2005, a Gang of 14 got together to fend off changes to filibuster rules when it was Democrats who were holding up George W. Bush nominees.

Offering technical advice to a gang would be well within the scope of her job but, as MacDonough made clear in her address, she allied with the centrists looking to block reform. “We worked on compromise orders; I was warning of nuclear winter, the erosion of the Senate’s trademark comity, and the danger of setting such a precedent,” she said. “I cautioned against the loss of the 60-vote threshold as a bulwark against pressure from the executive branch. I hoped that there would be some understanding that the rules that some in the Senate wanted to amend for a limited advantage were there to protect them from disadvantage in all other circumstances. And for a time, it seemed as though the center would hold.”

MacDonough described the ultimate reform to the filibuster — which allowed the Obama administration to staff its agencies and appoint judges — as a “stinging defeat.” “By November, the argument was lost; the chair on my advice ruled against a point of order on lowering the threshold for cloture, but an appeal was taken, and I was overturned. It was a stinging defeat that I tried not to take personally. That wasn’t easy,” she said.

Her understanding of the event as a “stinging defeat” suggests an expansive view of her role in the Senate.

Of course, she was not overturned because she made no ruling. As parliamentarian, she only advises the chair of the Senate, who is either the vice president or a senator. She reports to the secretary of the Senate, who reports to Senate Majority Leader Chuck Schumer. Her understanding of the event — a majority of senators voting to implement new rules in the chamber where they are elected to serve — as a “stinging defeat” suggests an expansive view of her role in the Senate.

The fight to reform the filibuster has brought the Senate’s real history into relief, with a number of Democratic senators having read the recent book “Kill Switch: The Rise of the Modern Senate and the Crippling of American Democracy,” a history of the filibuster written by Adam Jentleson, a former aide to Senate Majority Leader Harry Reid. The book, along with individual education sessions conducted by Sen. Jeff Merkley, D-Ore., has helped senators understand that the filibuster was not part of the original Senate design, was introduced by accident, expanded in a fluke, and then ruthlessly exploited almost exclusively in defense of segregation and white supremacy.

MacDonough noted that in 2017, when Senate Majority Leader Mitch McConnell, R-Ky., ended the filibuster for Supreme Court justices, she felt a sense of empty vindication. “It will never feel good or rewarding enough to say ‘I told you so’ when people finally understand the point of which you were trying to convince them,” she said.

The notion that McConnell would not have ended the filibuster if Democrats had resisted doing so is at odds with every norm McConnell had been willing to break to keep the seat open, including refusing to entertain a nominee from President Barack Obama.

That year, MacDonough took heat from the right for barring some elements of the Affordable Care Act from being repealed through reconciliation, and from the left for allowing drilling in the Alaska National Wildlife Reserve to go through. But, she said, she had no regrets, and she wasn’t going anywhere. “As a senator said to me recently, if last year didn’t make you retire, you’re never going to go,” she said. That’s just fine with a majority of senators in both parties, Senate insiders said, explaining that MacDonough enjoys an immense amount of popularity on both sides of the aisle and that firing her now would likely blow up any chance of moving anything through reconciliation. Having an unelected bulwark to blame for an inability to govern is a bipartisan thing.

Having an unelected bulwark to blame for an inability to govern is a bipartisan thing.

In any event, she did stick around, and in February scotched the Democratic effort to include a minimum wage increase in reconciliation, despite the Congressional Budget Office finding that the policy had a significant deficit impact. MacDonough’s confidence in her position was expressed in the opinion she delivered. After hearing extended arguments from both parties, and sorting through dueling memos, she issued a one-line verdict simply declaring the minimum wage ineligible for reconciliation. The hubris of declining to offer any advice, and instead simply rendering a verdict, infuriated some Democrats involved in the process.

Her opinion, issued Sunday, on including a pathway to legal residency and citizenship in the Democrats’ reconciliation bill suggests that MacDonough took the criticism to heart; this time around, she actually explained her reasoning as to why, she judged, immigration reform shouldn’t be part of reconciliation. But the way she did is indicative of how far removed the position is from that of a staffer offering parliamentary advice. She begins it like a Supreme Court opinion: “The question before us is …”

For a provision to clear what’s known as a “Byrd bath,” there is a six-prong test. Five of those prongs — no need to go into them here — are fairly objective. The sixth, the most subjective, is the “merely incidental” test. A policy can’t be included if its budget impact is “merely incidental.” A staffer offering guidance would let principals know how a policy fared on each prong, and in cases where there’s a gray area, present competing arguments and precedents. Instead, MacDonough waxed poetic about the trials of migrants and then created a brand new precedent that, if taken to its logical conclusion, would bar any significant legislation from moving through reconciliation.

“The reasons that people risk their lives to come to this country — to escape religious and political persecution, famine, war, unspeakable violence and lack of opportunity in their home countries — cannot be measured in federal dollars,” she wrote. That’s a lovely sentiment, but it has nothing to do with interpreting Senate rules. MacDonough should run for office, and in the meantime, the Senate needs staff that can offer unbiased advice.