Last spring, Texas legislators came closer than ever to passing a bill that would protect people incarcerated in state prisons from summer temperatures that routinely breach 100 degrees and are due to keep rising with the climate crisis.

“It’s like being in a walk-in closet in one of the hottest days of the year with another person for maybe 16 to 18 hours a day,” said Tracy Williams, who was released from prison last December after 25 years and now works for the Texas Inmate Families Association. “Sometimes you have to rinse yourself and lay on the floor to try to catch a breeze.”

The hot weather has been to blame for the deaths of numerous incarcerated people over the years, leaving thousands of others in conditions described as torturous. In response, a movement of family members of the incarcerated and formerly incarcerated people have repeatedly pushed bills in the state legislature requiring climate control in detention centers. In the wake of a cold snap last winter that showed the temperature extremes can go both ways, last spring’s version sailed through the Texas House before being left to die unattended in a Senate committee.

Now, with a special 30-day legislative session launched this week, advocates see a rare opportunity to use federal funding from the Covid-19 stimulus package to pay for prison climate-control infrastructure Texas has long deemed too expensive. House Bill 88 would mandate that state prisons maintain temperatures between 65 and 85 degrees and install new air conditioning with air purification technology designed to reduce the spread of viruses. A separate appropriations bill would tee up the American Rescue Plan money to pay for it. In Texas prisons, 265 incarcerated people have died of Covid-19, along with 63 staff members.

Even as advocates are reaching for temperature controls to help people incarcerated by the state endure climate disaster, another bill would create a special carveout that allows counties to leave immigrant detainees in dangerous heat and cold.

“It seems the trajectory of the governor is to imprison everyone he can in the worst conditions.”

Since the Texas legislature only meets every two years, the stakes for the 30-day session are high. Whether incarcerated people in Texas will begin to see more survivable climate conditions over the next two years — or worse conditions than ever — could be determined in the next few weeks.

Republican Gov. Greg Abbott appears to be opposed to creating better conditions for detainees, advocates said. “It seems the trajectory of the governor is to imprison everyone he can in the worst conditions,” said Amite Dominick, president of Texas Prison Community Advocates, which is mounting a campaign to push legislators to finally pass the air conditioning bill. 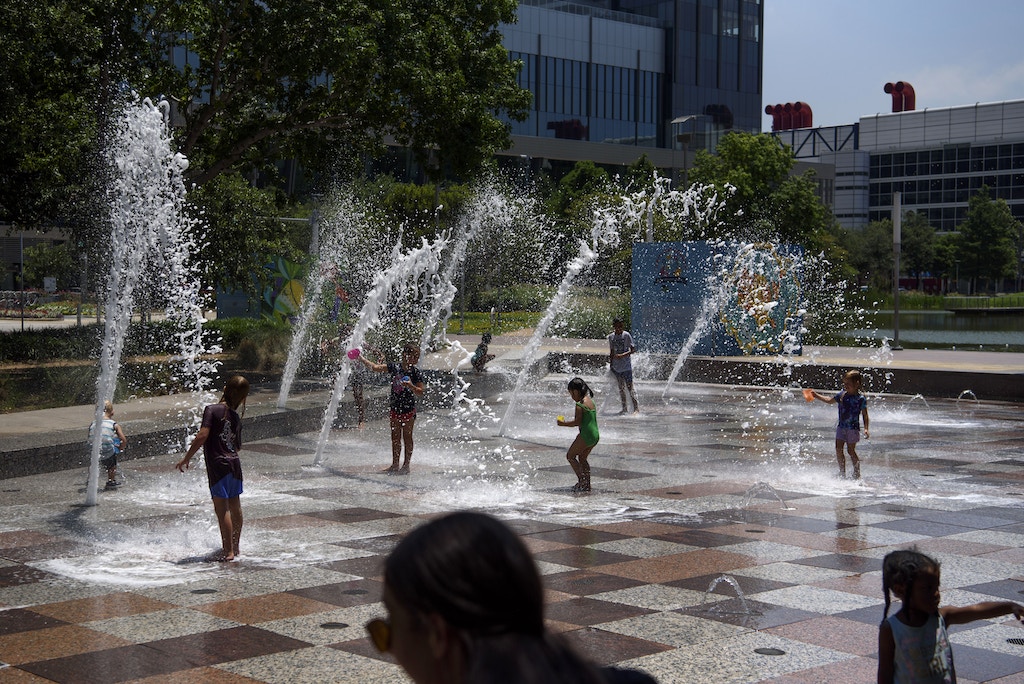 Children play on the splash pad at Discovery Green during a heat wave in Houston on June 17, 2021.

The bill that could leave immigrants in the heat and cold can be traced back to Abbott’s anti-immigrant Operation Lone Star. During the summer, as a growing climate disaster gripped much of the country, the governor instead declared a disaster in Texas due to migration along the Texas border. Widely seen as a political move to push Abbott’s presidential hopes, the state made nearly $2 billion available for “border security efforts,” including to help sheriff’s offices arrest immigrants on misdemeanor rather than immigration charges.

Typically, such charges would land a person in a county jail, where they would await trial or post bail. Unlike state prisons, those jails have standards that include a requirement for temperatures to fall between 65 and 85 degrees. To accommodate the influx in immigrants arrested by border county law enforcement authorities, the state is repurposing state prison units, where there are no climate standards. In short: If an undocumented immigrant broke the law in certain counties, rather than going to a county jail they would go to a separate facility with worse conditions.

Placing immigrants in state prisons already creates worse conditions than they would face in county jails, said Alicia Torres, a member of Grassroots Leadership’s ICE Out of Austin group, which aides detained immigrants. The new bill would make the conditions even worse — including by allowing state prisons acting on behalf of county governments to forgo the climate control requirement. According to Grassroots Leadership’s policy and research manager Bethany Carson, the bill “could be used to justify the lack of almost any basic needs that would make establishing these facilities more expensive.”

“The standards are protecting the health and safety of people who are incarcerated. To say some people are deserving of that and other people are not — it’s at best morally repugnant.”

Michele Deitch, an expert in prison and jail conditions at the University of Texas at Austin, said the jail standards were created primarily to protect the counties from lawsuits. “These are not high standards,” she said. “I think the counties ought to be really worried. This could open them up to liability in lots of different ways.” (Texas already foots a hefty annual bill fighting lawsuits filed by people outside of the immigration system who have been impacted by extreme heat conditions in state prisons.)

Beyond avoiding lawsuits, Deitch said, “The standards are protecting the health and safety of people who are incarcerated. To say some people are deserving of that and other people are not — it’s at best morally repugnant.”

In a best-case scenario for incarcerated people, the bill waiving jail standards for immigrants would fail, while the climate control bill for state prisoners would succeed.

The availability of federal funds helps address detractors’ repeated — and exaggerated — excuse that climate control is too expensive. There’s even precedent in New Hampshire for federal Covid-19 relief funds to be used to install ventilation systems in state prisons.

“People inside are still human,” said Williams, the formerly incarcerated person now working with people reentering society post-prison. “Yes, a lot of us made bad decisions. We messed up. But would you put your dog or an animal in a hot car? You wouldn’t do that.”