How Rep. Josh Gottheimer Got Outmatched by the Congressional Progressive Caucus

The progressive flex was a long time coming. 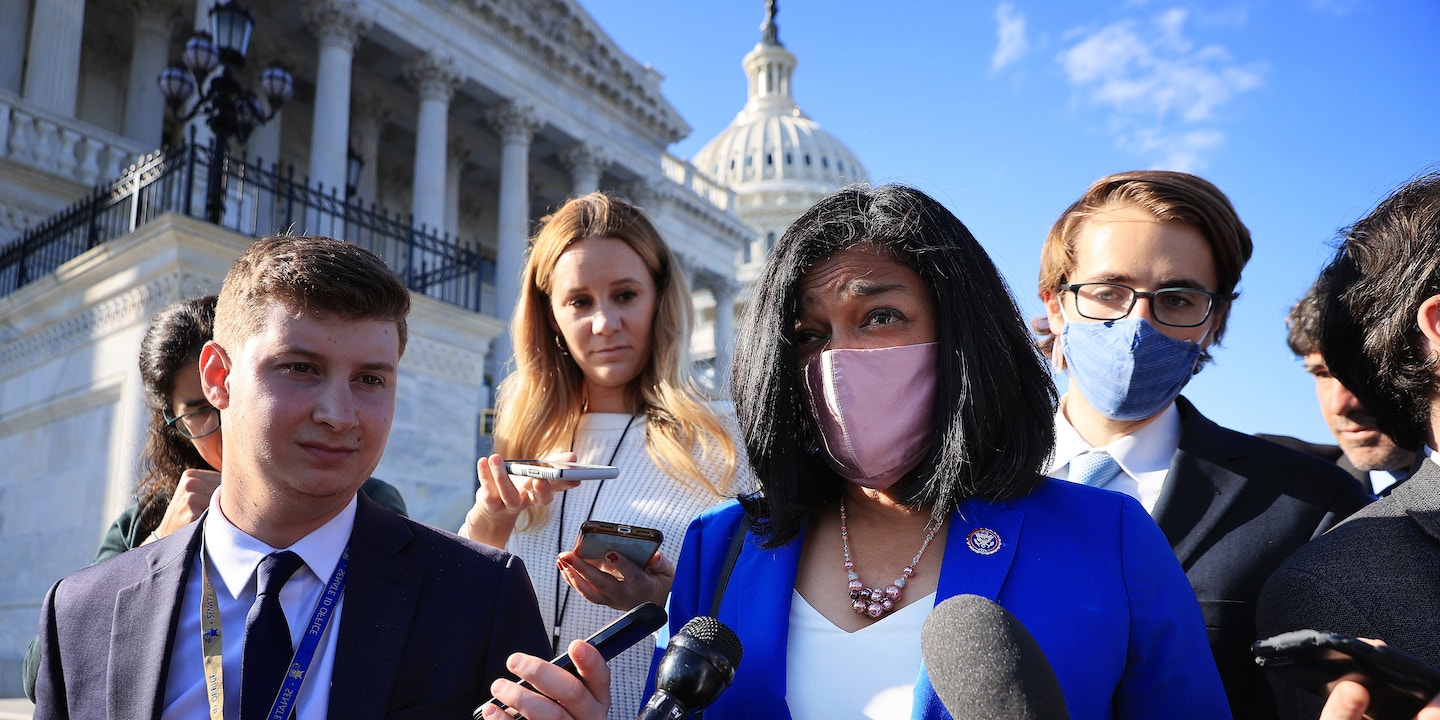 Late Friday, Rep. Josh Gottheimer, D-N.J., released a statement expressing dismay that House Speaker Nancy Pelosi had once again delayed a vote on the bipartisan infrastructure bill and accusing a “far left faction” of endangering President Joe Biden’s agenda. Members of the Congressional Progressive Caucus had threatened to withhold their votes for the infrastructure bill if it wasn’t preceded by a larger reconciliation bill, a plan that had been in place since the summer.

“We were elected to achieve reasonable, commonsense solutions for the American people — not to obstruct from the far wings,” Gottheimer wrote.

Never mind the fact that Gottheimer himself led a small group of House members to obstruct the larger reconciliation spending bill, which contains many key priorities of the Biden administration’s agenda. And that Biden traveled to the Capitol and, in a private meeting with Democrats, endorsed the progressive strategy to pass both bills at the same time — and encouraged both wings to find a number they agreed on and move forward.

At the end of August, Gottheimer and a gang of eight other House members used their leverage to force Pelosi to schedule a vote on the infrastructure bill that had already passed the Senate with a bipartisan majority. The group of conservative Democrats hoped to cleave it off from the broader reconciliation package, which includes steep tax hikes on the rich and robust social spending.

But come Friday, Gottheimer was the lone name on the statement after, according to Politico’s Heather Caygle, no one else from his “unbreakable nine” would sign on. Later that evening, a Republican representative said one angry Democrat called Pelosi a “fucking liar” for not putting the bill on the floor, and there was little question about the identity of that angry Democrat.

The goal of Gottheimer’s group had been to pass the infrastructure bill and then train their fire on the bigger bill. Free the hostage, then blow up the insurgents. Their demand went against the grain of the Democrats’ two-track strategy, but Pelosi conceded by giving them a date for the infrastructure floor vote: September 27.

Gottheimer and some of his allies then huddled with the dark-money group No Labels, which finances their campaigns and was instrumental in organizing the opposition. “You should feel so proud, I can’t explain to you, this is the culmination of all your work. This would not have happened but for what you built,” Gottheimer told them, according to a recording of the conversation obtained by The Intercept. “It just wouldn’t have happened — hard stop. You should just feel so proud. This is your win as much as it is my win.”

Rep. Kurt Schrader, D-Ore., former chair of the right-wing Blue Dog Coalition, celebrated that the victory would let them focus next on fighting the reconciliation package, which he told the group he opposed. “Let’s deal with the reconciliation later. Let’s pass that infrastructure package right now, and don’t get your hopes up that we’re going to spend trillions more of our kids’ and grandkids’ money that we don’t really have at this point,” Schrader said.

But House progressives quickly responded, vowing to block the bill — to hold the line — if it came to the floor without the broader spending bill. Gottheimer remained confident over the next several weeks, saying privately that he was sure the progressives would fold. On September 27, it was clear that there weren’t enough votes to pass the bill, and Pelosi pulled it from the floor, rescheduling it for a September 30 showdown.

On CNN Thursday, Gottheimer gave the bill a “1,000 percent” chance of being passed that day. He never got close, and the bill was pulled again, leaving Gottheimer to meekly argue that the House had not been technically adjourned. Friday would still be the same “legislative day,” he tweeted, and negotiations were ongoing and he was grabbing Red Bull and Gatorade and — hey, where’s everybody going?

It ain’t over yet! This is just one long legislative day — we literally aren’t adjourning. Negotiations are still ongoing, and we’re continuing to work. As I said earlier: grabbing some Gatorade and Red Bull.

So Gottheimer, notoriously abusive to his revolving door of staff, had nobody around to advise that his Red Bull-fueled statement might backfire.

The journey of the Congressional Progressive Caucus from punchline to counterpuncher involved decades in the wilderness, followed by a rapid consolidation of power that took Congress by surprise this week.
The roots stretch back to the 2009 and 2010 fight over the Affordable Care Act, when an outmatched CPC was forced to swallow a bill that fell short of red lines they had drawn. More than 50 members of the caucus had signed a letter vowing not to support any health care reform bill that didn’t include a “robust public option,” but all of them did just that in the end.

Two things were clear: The House and Senate needed Democrats who were more progressive, and those progressives needed to be better organized. A few new organizations popped up in an effort to bring that into being. One called itself the Progressive Change Campaign Committee, or PCCC — its abbreviation a troll of the DCCC, the Democratic Congressional Campaign Committee, which it was designed to counterbalance. Separately, then-bloggers Jane Hamsher and Glenn Greenwald organized a political action committee to back progressive challengers in primaries.

Two things were clear: The House and Senate needed Democrats who were more progressive, and those progressives needed to be better organized.

After the midterm wipeout of 2010, many electoral fights took place with little media coverage. Two of the first progressive battles of the new era came in 2012, when a coalition of groups, including the PCCC, intervened in open primaries for House seats in San Diego and New Mexico.

In San Diego, progressives backed Lori Saldaña over right-wing businessperson Scott Peters. In New Mexico, they were for Eric Griego against the conservative Michelle Lujan Grisham. They lost both narrowly, and the losses have reverberated. Earlier this month, Peters cast one of three votes against a committee measure to allow Medicare to negotiate the price of prescription drugs. Lujan Grisham is now governor of New Mexico, where she battles progressives from her statewide perch.

But, thanks in significant part to the organizing around Griego’s campaign, which evolved into a statewide effort, Deb Haaland ran for Lujan Grisham’s vacant seat and won as a progressive. When Haaland was elevated to secretary of the interior earlier this year, the primary campaign for her seat wasn’t left versus center or left versus right but rather who was the most progressive. Even in a race dominated by party insiders, it went to Melanie Stansbury, a progressive state legislator.

This week, the newly sworn-in Stansbury publicly vowed that she would hold the line with the progressive caucus and block the bipartisan bill unless both moved together. Adding rank-and-file members like Stansbury to the caucus’s public list was in some ways more valuable than compiling a list of the usual suspects, showing Pelosi that the opposition wasn’t just deep, but it was also broad.

Throughout the 2010s, the Democrats’ ability to raise small dollars gradually expanded, driven forward by Elizabeth Warren’s Senate campaign in 2012 and then Bernie Sanders’s presidential campaign in 2016. Though Sanders fell short, he showed that there was a major base of support for his democratic socialist agenda, in terms of both people and money. That same year, Pramila Jayapal, an anti-war organizer from Washington state whose inspiration to enter electoral politics was Rep. Barbara Lee, D-Calif., was elected to the House.

She and Rep. Mark Pocan of Wisconsin set about transforming the progressive caucus from what former co-Chair Raúl Grijalva had described as a “Noam Chomsky book reading club” into a cohesive unit capable of wielding influence. The caucus set an internal agenda but didn’t have any requirements for joining. In 2018, when Alexandria Ocasio-Cortez upset New York Rep. Joe Crowley, her suggestion of a “sub-caucus” that could be more nimble as a bloc was seen internally as both a hopeful sign and something of a challenge. If the caucus didn’t get itself organized, it would be supplanted by something else.

It wasn’t a certainty until this week that the progressive bloc could hold strong.

During the next Congress, progressives withheld their votes in committee in a fight to strengthen H.R. 3, the bill that allows Medicare to negotiate drug prices. Donald Trump was president, so little that the House did was going to become law, but it was a preseason win of sorts that showed the tactic could work. Ahead of this Congress, the CPC tightened its ideological requirements for membership and shifted to a single chair to become more nimble. In early 2021, Senate Majority Leader Chuck Schumer used CPC intransigence to persuade Sen. Joe Manchin, D-W.Va., not to push too hard for deep cuts to unemployment benefits, telling him that progressives would take the American Rescue Plan down in the House if he did. At the same time, Jayapal shied away from a showdown over the $15 minimum wage after only 42 Democrats voted to override the parliamentarian.

Over the summer, the number of progressives willing to hold the line on the infrastructure bill continued growing, particularly as the holdout senators refused to even lay out what they were for and against. But it wasn’t a certainty until this week that the progressive bloc could hold strong.

Ocasio-Cortez said she doesn’t blame Gottheimer for miscalculating. “Honestly, I see why he was so certain, CPC never stood up like this until this week,” she told The Intercept. “Until this week, the most we could scrounge together for a showdown was like 14 members.”