The New Jersey Democrat refuses to say whether his resistance to Medicare drug bargaining will turn him against the reconciliation bill. 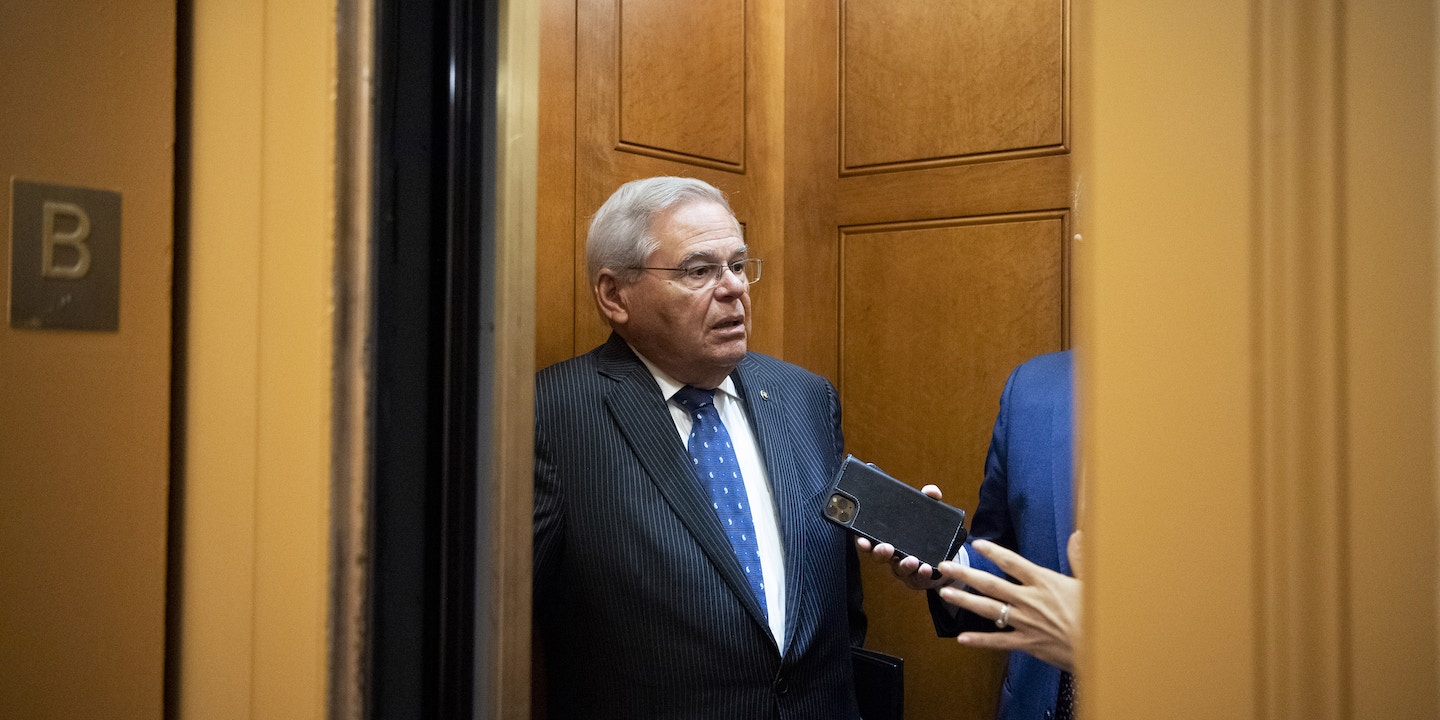 Sen. Bob Menendez, D-N.J., has not budged from his earlier criticism of a popular bill to lower the costs of prescription drugs, creating another possible hurdle for Democrats as they finalize a reconciliation package to achieve President Joe Biden’s Build Back Better agenda.

After raising concerns over the summer that the pharmaceutical industry would get unfairly “taxed,” Menendez confirmed to The Intercept on September 29 that he’s not in favor of the Lower Drug Costs Now Act, or H.R. 3. The bill would empower Medicare to negotiate certain drug prices with manufacturers directly, forcing pharmaceutical companies to lower their prices. Medicare could in turn use the resulting savings to pay for dental, vision, and hearing coverage, which the government program does not currently provide to its approximately 62 million beneficiaries.

“H.R. 3 does not guarantee … that the government’s going to save money, doesn’t guarantee that the consumer saves any money,” Menendez said. But the Congressional Budget Office estimated in December 2019 that the bill would in fact reduce the federal deficit by about $5 billion over 10 years. The bill would also allow Medicare to share the negotiated lower prices with private insurers and employers, so consumers on the private market stand to benefit too.

But the costs to the pharmaceutical industry are too high for the New Jersey Democrat, whose state is home to more drug companies than any other in the country.

While H.R. 3 seeks to cap older adults’ annual out-of-pocket drug costs at $2,000, an alternate bill that Menendez offered in July proposes a cap at $3,100. The proposal, which arrived just days after Biden endorsed allowing Medicare to negotiate down prices, wouldn’t give the government program bargaining power.

Medicare reform is one of several priorities that Democratic leaders have sought to include in a reconciliation package, along with universal prekindergarten, paid family leave, and clean energy investments. Lowering the skyrocketing prices of prescription drugs in particular has been a top goal for Democrats, who widely campaigned on the issue in last year’s congressional elections.

But the specific details of an H.R. 3 provision in the Build Back Better bill, like how many medications Medicare would be allowed to negotiate, have been shielded from the public. Further, Sens. Joe Manchin, D-W.Va., and Kyrsten Sinema, D-Ariz., have pledged to oppose a 10-year top line of $3.5 trillion, leaving uncertain whether leaders will have to cut certain policy objectives or reduce their scale. Amid a 50-50 split in the Senate, Democrats can’t afford to lose a single vote.

Menendez, who the media seldom portrays as a potential obstructionist of the bill, dismissed questions about whether H.R. 3’s inclusion would lead him to withdraw support from the legislation entirely. “I’ve never negotiated in the press about what my vote is or is not,” he told The Intercept on Tuesday, appearing to borrow a line from Sinema, who has notoriously refused to share publicly what her policy priorities are.

Menendez’s refusal to say whether H.R. 3 could be a red line for him is more extreme even than Manchin’s stance.

“My vote is going to hinge on the totality of the package, every single element, and then I’ll judge it accordingly,” he added.

Menendez’s refusal to say whether H.R. 3 could be a red line for him is more extreme even than Manchin’s stance. Manchin said it “makes no sense at all” that Medicare cannot negotiate drug costs with pharmaceutical companies, NBC reporter Sahil Kapur tweeted Wednesday, noting that Manchin supports the drug pricing proposal’s inclusion in the reconciliation package.

On the House side, where Democrats have only slightly more wiggle room, three lawmakers attracted significant frustration from reformers after they opposed allowing Medicare to bargain down prices in a vote last month. Reps. Kathleen Rice, D-N.Y., Scott Peters, D-Calif., and Kurt Schrader, D-Ore., blocked the measure in a House Energy and Commerce Committee vote, but their opposition doesn’t necessarily mean that it’s doomed. Schrader has already suggested that he’s against the reconciliation package entirely anyway, whereas Rice and Peters haven’t made their overall stance clear. Democratic leaders can still reintroduce an H.R. 3 provision through a manager’s amendment.

More than 80 percent of Americans support allowing Medicare to negotiate drug prices, according to a recent poll by West Health and Gallup. Resistance in the House and Senate, however, reflects the strong influence of Big Pharma. So far this year, drug manufacturers have given Peters $46,000, more than any other House member, and Schrader $18,000. In the same time frame, they’ve given Menendez more than $50,000, more than any other senator. He isn’t up for reelection until 2024.