An independent commission is trying to fix Michigan’s gerrymandered congressional map — but conservative groups are organizing to stop them. 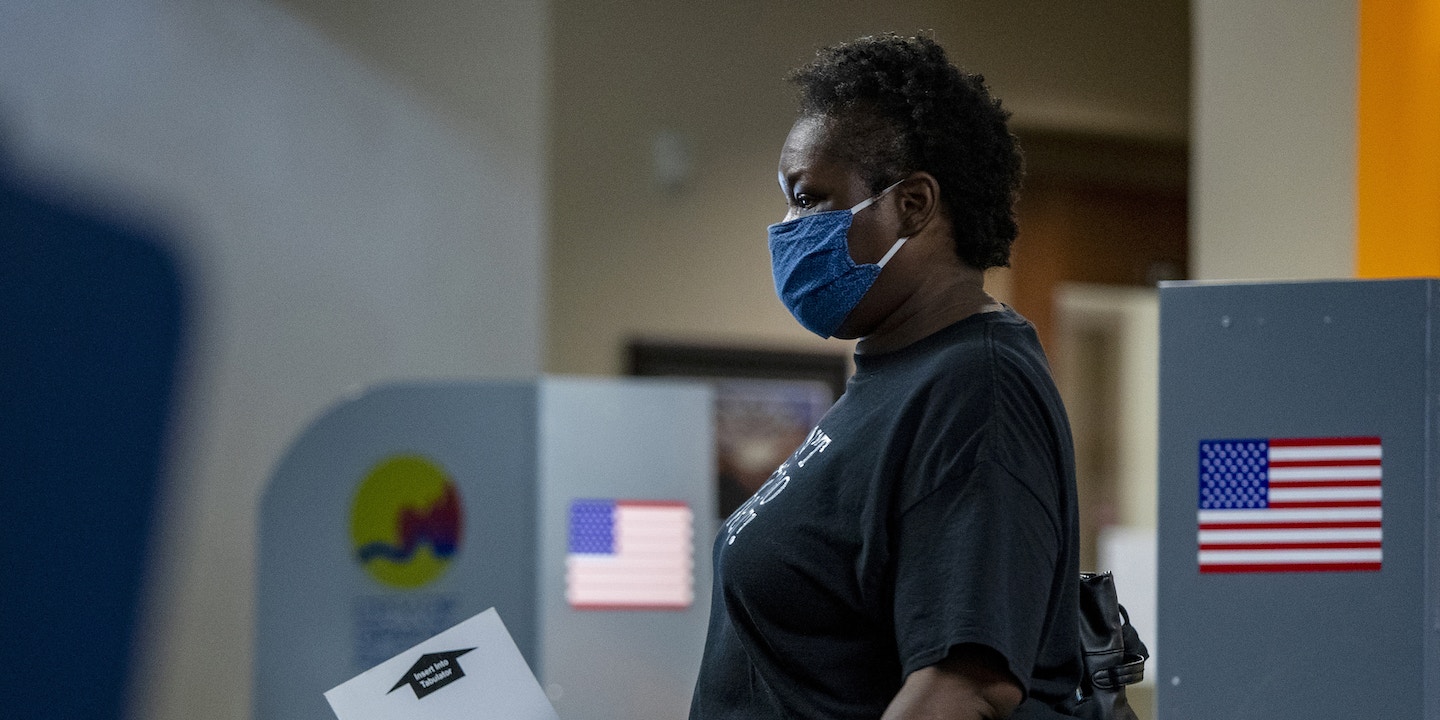 On Monday, the Michigan Independent Citizens Redistricting Commission, or MICRC, approved draft maps of the state’s new congressional and legislative districts. The 13-person nonpartisan body, whose members were randomly selected in August 2020, was formed after the state approved a 2018 ballot initiative to have an independent commission, rather than the state Legislature, conduct its redistricting process. But in the months since the commission started holding public hearings on the process in May, the Michigan-based group Fair Maps has alleged that the MICRC hid or deleted public comments that were critical of the commission, with its leader calling the MICRC “one of the least transparent public bodies in Michigan.” Supporters and critics of the MICRC say the statements could help lay the groundwork for future lawsuits to inhibit redistricting.

Fair Maps launched this year with the stated goals to “participate in every aspect of Michigan’s redistricting process”; to achieve “fair and independent redistricting”; to represent “the interests of everyday voters at commission meetings”; and to “educate and equip the general public.” The group is run by Tony Daunt, a Republican operative, former state party staffer, lobbyist, and conservative activist who has filed several unsuccessful election-related lawsuits against Michigan’s secretary of state, including an attempt to block the redistricting commission.

Daunt, the group’s executive director, was a logistics manager for the Michigan Republican Party in 2004 while it was chaired by Betsy DeVos, who went on to become former President Donald Trump’s secretary of education. Daunt was the party’s logistics director from 2009 until 2013, when, after a brief stint working for former Republican Gov. Rick Snyder, he became the executive director of the Michigan Freedom Fund — the conservative, Devos-funded group that organized protests against Democratic Gov. Gretchen Whitmer’s pandemic stay-at-home orders. He ran the Michigan Freedom Fund until May 2021, when he left and joined Fair Maps. Daunt is one of at least two Fair Maps members and was one of at least three Michigan Freedom Fund members with ties to DeVos. Fair Maps did not respond to The Intercept’s requests for comment.

In 2019, the year after the MICRC was established, Daunt joined 14 people in filing a federal lawsuit that challenged the commission’s eligibility requirements. The suit asked the court to declare the commission unconstitutional and stop the secretary of state’s office from conducting its selection process, which excludes people who in the past six years have run for or been elected to office, worked as lobbyists, or been employed by a political party or the state Legislature. At the time, Daunt was a registered lobbyist, an officer and member of the local GOP, and a member of its governing body. He and his fellow plaintiffs were ineligible for the redistricting commission.

A federal district judge dismissed the case in July 2020, and an appellate court upheld the decision in May of this year. Daunt left the Michigan Freedom Fund and joined Fair Maps the same month.

Fair Maps has led the efforts to undermine the MICRC, with Daunt telling a local news organization last month that his group had not ruled out suing the commission for missing a September 17 deadline to release the draft maps. (The U.S. Census Bureau published its redistricting census data in August, four months later than usual.) On September 28, Fair Maps published a statement attacking the MICRC and claiming that the body “made a mockery of the promise of transparency voters were guaranteed in 2018.” The group’s Twitter account was suspended as of September 21.

“He’s not advocating for fair maps or maps that give the Democrats a chance, he’s trying to influence the commission and the process to benefit Republicans.”

Since its establishment in 2018, the MICRC has received its own share of criticism from supporters and local media. Former Michigan Republican Party chair and Lincoln Project adviser Jeff Timmer said the body still has a long way to go to make maps that meet the federal requirements of the Voting Rights Act and don’t favor Republicans. Timmer, who was a principal map drawer in Michigan during Republican-controlled gerrymandering in 2001 and 2011, said the maps first released by the MICRC still heavily favored Republicans. In 2019, the year after voters approved the ballot initiative to form an independent redistricting commission, a federal judge found that Michigan’s congressional maps were gerrymandered in the GOP’s favor.

Numerous reporters have drawn attention to comments by MICRC members regarding concerns about the way the body has been “picked apart and analyzed” and been the recipient of “snark” from the press. In its September 28 statement, Fair Maps also accused MICRC spokesperson Edward Woods III of focusing “his fire on the free press.”

“‘Fair Maps’ to the AFL-CIO and MI Dems = maps that outright give Democrats a majority,” tweeted Meghan Reckling, Fair Maps grassroots adviser and chair of the Livingston County Republican Party, on September 16. “Anything short of that they will scream the maps are gerrymandered.”

Reckling ran unsuccessfully last year as a candidate in a Republican primary for the Michigan House of Representatives, receiving support from the DeVos family and the Great Lakes Education Project, a charter school advocacy group founded by DeVos. Six members of the Devos family gave maximum contributions to Reckling’s campaign on July 15, 2020, totaling $6,300. On September 27, she took to Facebook to applaud a recent decision by the Board of State Canvassers to approve a ballot petition for a restrictive voter ID law.

“Today, the Michigan Board of Canvassers approved the language for the Secure MI Vote ballot petition,” Reckling wrote. “We must ensure that every voter is required to verify their identity through a government-issued photo ID.” Daunt was appointed to the board in January.

Daunt’s role with Fair Maps is to advocate “for maps that benefit the Republicans,” said Timmer, who knows and has worked with Daunt. “He’s not advocating for fair maps or maps that give the Democrats a chance, he’s trying to influence the commission and the process to benefit Republicans.”

Since Daunt’s departure from the Michigan Freedom Fund, the group has continued to target the MICRC. The group claims that the commission could “make gerrymandering worse” and has personally attacked MICRC members online. Like Fair Maps, the Michigan Freedom Fund is run by people who for years have worked closely with the DeVos family and affiliated political groups.

On September 3, the Michigan Freedom Fund posted a statement claiming that one of the MICRC’s independent commissioners had posted “years’ worth of offensive, racist and misogynistic tweets.” The post, titled “Tweets so offensive we can’t even quote them,” did not provide any specific examples. (Tweets posted between 2010 and 2013 by Commissioner Anthony Eid, now 28, reviewed by The Intercept included comments about genitalia and rape and appeared crass but nonthreatening.) The Michigan Freedom Fund’s statement also claimed that Eid was not an independent but rather a “vocal far-left Democrat who has long supported radical Democrats like Bernie Sanders,” an independent.

On September 9, the Michigan Freedom Fund called on Eid and one other MICRC member to resign, claiming that both had lied “to gain a seat as an ‘independent’ member of the Commission.” Eid declined to comment but directed The Intercept to Woods, the MICRC spokesperson, and to previous statements from the commission on the Michigan Freedom Fund’s claims.

“The MICRC believes the press should be held accountable for its conduct and provide the same analysis for proponents and opponents of the MICRC work,” Woods said in a statement to The Intercept. According to the commission’s legal counsel and partisan fairness expert, he added, “the draft proposed maps follow the Federal Voting Rights Act and meet the standards for partisan fairness.”

Michigan Freedom Fund Chair Greg McNeilly and Executive Director Tori Sachs both have ties to the DeVos family. Prior to joining the Michigan Freedom Fund in May, Sachs was the executive director of Michigan Rising Action, a dark-money group started in September 2019 by a Republican PAC to hold “liberal groups and their special interest networks accountable” and to advance “conservative principles.” The group is run by Eric Ventimiglia, who worked under DeVos while she was education secretary.

Sachs also managed the 2018 U.S. Senate campaign for Michigan Republican John James, who was backed by the DeVos family in his unsuccessful bid to unseat Democrat Debbie Stabenow. After James lost in 2018, Sachs became a consultant and the executive director of Better Future Michigan, a super PAC that backed her former employer when he ran again in 2020, this time against Democratic Sen. Gary Peters. James hired DeVos’s niece as his 2020 assistant communications director, and six members of the family gave Better Future Michigan a total of $800,000. James’s 2020 and 2018 campaigns were the subject of numerous complaints to the Federal Election Commission by groups like the Michigan Democrats and End Citizens United, both of which accused his campaign of coordinating with dark-money groups, including Better Future Michigan.

McNeilly, the Michigan Freedom Fund chair and Republican political strategist, was chosen in August to succeed Dick DeVos as president and CEO of the Windquest Group, an investment management firm based in Grand Rapids, Michigan, for which he had been chief operating officer since 2011. (Dick’s wife, Betsy DeVos, also previously chaired the firm.) McNeilly managed Dick’s 2005 gubernatorial campaign and was the executive director of the Michigan GOP from 2003 to 2005 and political director from 1998 to 2000, both under Betsy as chair. From 2001 to 2003, McNeilly was the executive director of Choices for Children, a nonprofit previously led by Betsy that advocated for charter schools. In 2000, McNeilly was the communications director for the DeVos-funded political committee Kids First! Yes!, part of a pro-school voucher coalition, which Dick also previously led. McNeilly also served on the board of the DeVos-funded Great Lakes Education Project.

The Michigan Freedom Fund did not respond to requests for comment.

In the last several months, Sachs has posted frequent criticism of the MICRC on Facebook and Twitter, including a false claim that “Out of the 6 officers Michigan’s ‘Independent’ redistricting commission has had, exactly 0 have been a Republican.” (The randomly selected 13-person body includes four Democrats, four Republicans, and five members not affiliated with either major party. It’s not clear if Sachs was referring to the MICRC’s 13 commissioners or its four staffers.)

Asked about efforts by DeVos-aligned Republican operatives to undermine the commission, Woods said, “Like other Michigan residents, we welcome them to draw fair maps free from gerrymandering and according to the seven ranked redistricting criteria.”

Some DeVos-linked figures have been fighting the redistricting commission since before it existed. In 2018, another person in the Daunt family was a plaintiff in Citizens Protecting Michigan’s Constitution v. Secretary of State, an unsuccessful lawsuit to keep the MICRC proposal off the state ballot. The Michigan Supreme Court ultimately found that the proposal did not violate the state constitution and allowed it to appear on the ballot that year. Daunt was described in the suit as a registered voter in Genesee County and the “parent of a person otherwise disqualified from serving on the proposed commission.”