As secretary of state in 2003, Powell told the United Nations that Iraq had weapons of mass destruction. That was false. 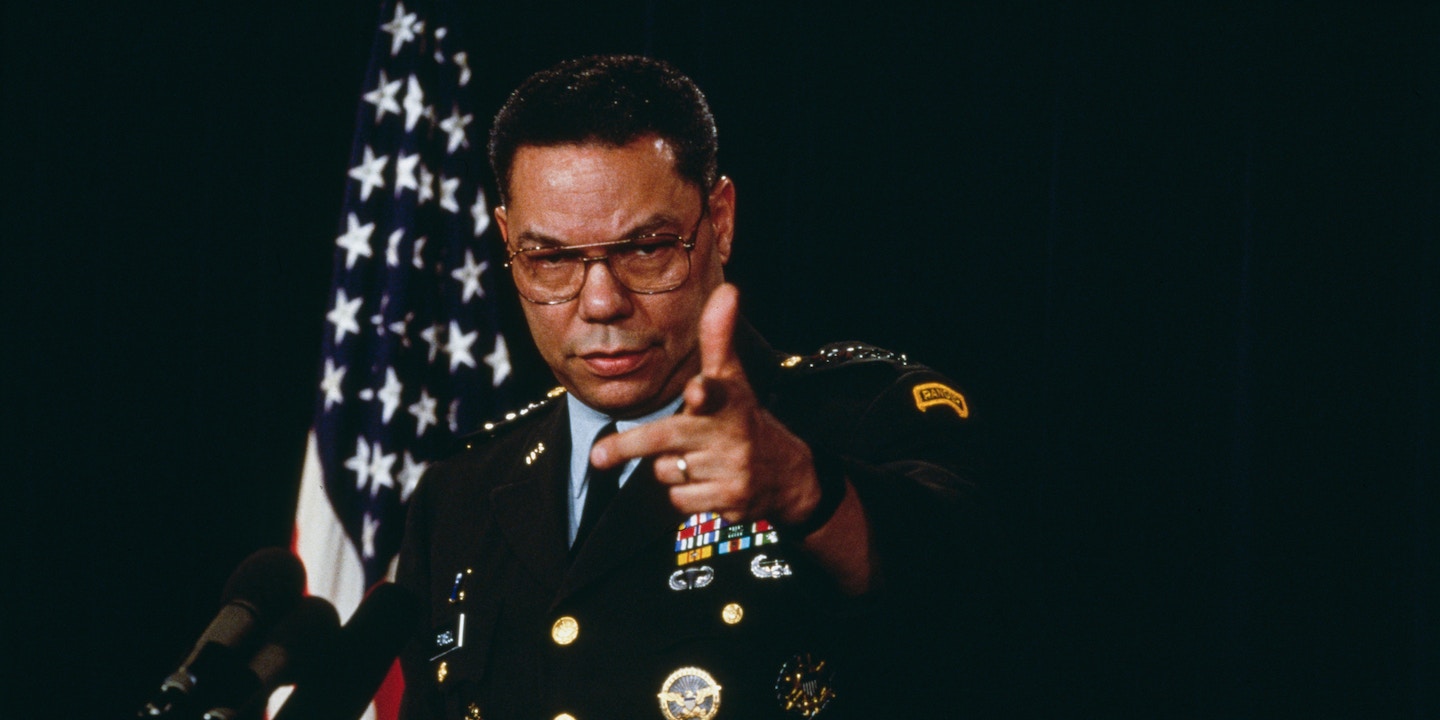 “I am saddened by the death of Colin Powell without being tried for his crimes in Iraq.” —Muntadher Alzaidi

Colin Powell is being hailed, at his death, as a trailblazer. He certainly was that.

Raised in the South Bronx by immigrant parents, Powell was a graduate of the City College of New York and rose through the ranks of the U.S. military to become the first Black chair of the Joint Chiefs of Staff, under President George H.W. Bush during the Persian Gulf War. After that — and most famously — he served as America’s first Black secretary of state during the presidency of George W. Bush. He died today at 84 of complications related to Covid-19.

His contemporaries in the U.S. cannot find enough words of praise. “Colin Powell was the North Star to a generation of senior American military officers including me,” wrote retired Adm. James Stavridis. For Richard Haass, who heads the Council on Foreign Relations, Powell was “the most intellectually honest person I ever met.”

It’s a different story in Iraq, where millions of people likely share the sentiments of Muntadher Alzaidi, who memorably threw his shoes at George W. Bush during a 2008 press conference in Baghdad. Reacting to Powell’s death, Alzaidi expressed sadness only over the fact that he did not face a war crimes trial for his pivotal role in the invasion of Iraq. “I am sure that the court of God will be waiting for him,” Alzaidi wrote on Twitter.

Powell’s friends in America tend to briefly note, in the soft glaze of his own regret, the most consequential act of his life. On February 5, 2003, Powell made a 76-minute speech to the United Nations Security Council in which he argued the Bush administration’s case for invading Iraq. He insisted that Iraq’s leader, Saddam Hussein, was overseeing a secret program to make weapons of mass destruction. Powell brandished satellite photos of what he confidently said were decontamination trucks, aluminum tubes, and other WMD paraphernalia. He even held up a vial that he said could contain anthrax.

There was, of course, a big problem with all of his assertions: They were lies. The intelligence behind his speech was the opposite of emphatic — it was false, manipulated, and fabricated. The trucks were just trucks. The tubes were just tubes. There was no anthrax. There was, more fundamentally, no reason to invade Iraq. Nonetheless, thanks to Powell’s presentation, the Bush administration went ahead with its plans, and in the ensuing catastrophe, at least several hundred thousand Iraqis lost their lives, as well as more than 4,000 U.S. soldiers.

There is no shortage of senior officials in the Bush era who had a higher quotient of intentional malignance than Powell. We know their names well: Dick Cheney, Donald Rumsfeld, Condoleezza Rice, George Tenet, Paul Wolfowitz, and, of course, Bush himself. But Powell was unique in a way that does not flatter his legacy: He was perhaps the only public figure who could have stopped the White House from going ahead with its lunatic invasion, and he failed to do so. In a lengthy article published last year, writer Robert Draper traced the what-if of Powell, the most popular member of Bush’s post-9/11 Cabinet, telling the truth when it mattered:

What if that same voice that publicly proclaimed the necessity of invading Iraq had instead told Bush privately that it was not merely an invitation to unintended consequences but a mistake, as he personally believed it to be? What if he said no to Bush when he asked him to speak before the U.N.? Powell would almost certainly have been obligated to resign, and many if not all of his top staff members involved in the Iraq issue would also have quit.

Dominoes would have continued to fall. The British foreign secretary, Jack Straw, would have almost certainly followed Powell’s example, which meant that the crucial British support for the invasion would have cratered. In the U.S., Draper noted, “Doubters in the upper ranks of the American military — there were several — would have been empowered to speak out; intelligence would have been reexamined; Democrats, now liberated from the political pressures of the midterm election, would most likely have joined the chorus.”

That was the path not taken, because Powell would not stand up to Bush.

“I didn’t have any choice,” Powell told Draper feebly. “What choice did I have? He’s the president.”

The ironic twist of not just Powell’s career but also the careers of so many American generals is that they abjectly lacked, when the moment called for it, the one thing that soldiers are supposed to possess in abundance: courage. The history of the wars in Iraq and Afghanistan is filled with U.S. generals who were lauded as heroes but lacked the guts or honesty to stand up to the whims and dictates of their superiors. Millions of people have been killed and injured on their failed watch since 9/11.

Powell resigned from the Bush administration in 2004 and never really owned up to what he had done. He recognized that his U.N. speech was inaccurate and described it, in an interview with celebrity journalist Barbara Walters, as “painful” and a “blot” on his career. Those comments, not long after he left office, were pretty much as far as he would ever go in terms of introspection or criticism. He was unable to admit the truth that his chief of staff Lawrence Wilkerson now acknowledges. “I participated in a hoax on the American people, the international community, and the United Nations Security Council,” Wilkerson has said.

The “blot” did not matter that much to Powell’s reputation in the U.S., because after the Iraq disaster, he continued to blaze a lucrative path in the corporate world, joining the board of directors of Salesforce and Bloom Energy and becoming a “strategic adviser” to the venture capital firm Kleiner Perkins. (He was already very rich — he had received a $6 million advance for his 1995 memoir “My American Journey.”) He was a trailblazer, in this way, for a generation of retired generals who have coasted into 1 percent status thanks to the flattering reviews they receive in cultural and political circles no matter the actual consequences of their government service.

In fact, there are many levels on which Powell can be described as trailblazing, and it’s complicated to consider them together. As reporter Terrell Jermaine Starr and columnist Karen Attiah noted within hours of Powell’s passing, he was an important and inspiring figure to a large number of Black Americans, particularly before his service in the Bush administration. “I am genuinely sad about Colin Powell’s death — while acknowledging his role in America’s reckless decision to invade Iraq,” Attiah wrote on Twitter.

Scholar and journalist Marc Lamont Hill struck a similar balance in his assessment today. “At the personal level, Colin Powell was a nice man,” Hill wrote. “He was also a trailblazer. But he was also a military leader and key strategist of an empire that killed countless people and undermined the sovereignty of multiple nations. In our memorials, we must be honest about all of this.”