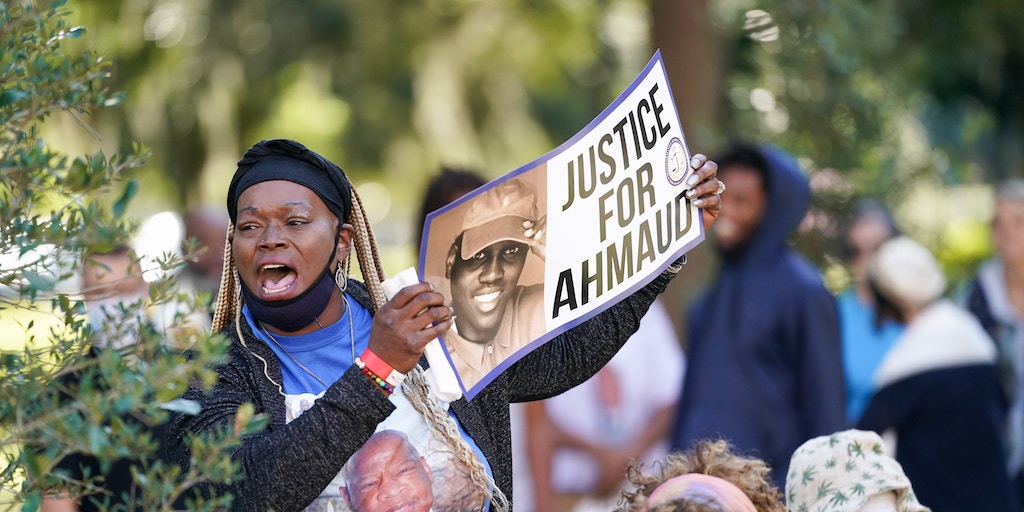 Ruthie Freeman demonstrates for justice for Ahmaud Arbery at the Glynn County Courthouse on Oct. 18, 2021, in Brunswick, Ga.

Are all white people who use the N-word racists?

Do you believe that anyone who opposes the Black Lives Matter movement is a racist?

Is the Confederate flag a symbol of racism?

The legal team defending the trio of white men accused of murdering Ahmaud Arbery, a 25-year-old Black man, last year in south Georgia would like to know how potential jurors answer these questions.

Jury selection began Monday in an effort to choose 12 jurors and four alternates out of 1,000 people in Glynn County called to serve. The county court commandeered a Brunswick, Georgia, recreation center to begin screening potential jurors, shuttling them in batches of 20 to the courthouse.

The process is excruciatingly slow, leading Superior Court Judge Timothy Walmsley to complain about how long he can hold people while defense attorneys and the prosecution pore over the answers to their questions from prospective jurors. Twelve of the first 20 potential jurors were dismissed for cause, while five of the second 20 have so far been dismissed, with more intensive questioning to come.

Arbery’s death at the hands of former police officer Gregory McMichael, his son Travis McMichael, and their neighbor William “Roddie” Bryan amplified protests for racial justice across the country last year when a video emerged of Arbery being shot while jogging. The initial failure of local police and prosecutors to arrest the men now on trial led to criminal charges for the former Glynn County district attorney and a major overhaul of the county police leadership.

It also led to deep, long-lasting media attention on Glynn County and race. Glynn lies on the coast between Jacksonville, Florida, and Savannah, Georgia, a racially mixed community defined by the contrast between its working-class roots and the exclusive wealth of St. Simons Island.

Possible jurors easily confessed to being influenced by the intense media coverage of the case, and several know one or more of the defendants personally. Under close questioning, the depth of the revulsion some in the juror pool have for the three accused white men became clearer. More than one said they could not fairly consider the men’s guilt or innocence and have been cut from the panel.

At the core of the jury selection is a fundamental, difficult question: Given the racial Rorschach test that is the Arbery death, how do you find jurors who can lay aside their impressions of the case long enough to come to a fair decision?

The defense’s questions, most of which were thrown out by the judge, were designed to identify jurors who “view this case through a prism of a race-motivated killing,” Gregory McMichael’s defense attorney Franklin J. Hogue said during a break in jury questioning. If a juror has formed a “fixed and definite opinion” — a specific legal term for jury selection purposes — on what the case is about, it can be cause to remove the juror from the pool without using one of the defense’s precious 24 peremptory challenges. That’s happened a few times so far, even among the first tranche of 20 out of the 1,000 potential jurors.

The defense’s questions would have effectively allowed many, if not most, Black potential jurors to be excluded for cause — an anti-racist bias strong enough to prejudice a juror — that may correlate strongly with the race of that juror. That said, antipathy toward the defendants appears to cut across race, in part because of the media reaction to Arbery’s killing that sprouted up when the state initially failed to act.

“We do know that race is an issue in this case,” Hogue said. “The vast majority of media coverage characterized the defendants as white racist murderers.”

Defense attorneys initially wanted to bar reporters from jury selection entirely. It’s one thing to tell your buddy at the bar that you might be a little racist, their thinking went. It’s another to say so in an open courtroom in front of a bunch of journalists. The court has taken steps to ensure the anonymity of the jurors, but that’s not likely to completely eliminate the social pressure to reject racism in public.

After howling protests from First Amendment advocacy organizations and media lawyers, the defense scaled back their request, with Hogue asking the court today to exclude observers when jurors were asked questions of a “very sensitive and private nature.”

After discussion, Hogue withdrew the N-word question from his list of jury questions, and Walmsley struck down most of the other questions that closely probed racial bias.

Most, but not all. When Hogue asked one of the jury pools who among them were supporters of the Black Lives Matter movement, five raised their hands. The same five raised their hands when asked if they believe that people of color are treated unfairly by the criminal justice system. Three agreed with the statement that the old Georgia state flag, which incorporated the Confederate battle emblem, is a symbol of racism.

Five years ago, the U.S. Supreme Court found in Foster v. Chatman that Georgia prosecutors had impermissibly used race as a criteria for striking potential jurors in voir dire. Prosecutors in the death penalty trial left fairly obvious evidence of their intentions in their notes, coding and ranking jurors by race. A long-standing precedent, Batson v. Kentucky, makes it unconstitutional for prosecutors to throw out jurors on the basis of race. No similar precedent stands for defense attorneys doing the same thing.

The judge has yet to rule on a question about whether the jury will be allowed to see a picture of Travis McMichael’s truck, which uses a vanity license plate bearing the old state flag. The legal question is whether showing the plate with the flag would prejudice the jury by leading them to believe that the McMichaels are racists for displaying it.

A crowd of about 100 people sat in vigil on the courthouse lawn while jury selection commenced. Some had traveled from as far as New York City and Philadelphia. Arbery’s family has been central to the demonstrations of support for the prosecution.

“His heart was bigger than his whole life was,” said Arbery’s father, Marcus Arbery Sr., at a teach-in next to the courthouse. Justice, in his mind, requires change — as well as a guilty verdict. Marcus Arbery reflected on his son’s strength and warrior spirit in the face of “a lynching,” describing him as “a warrior.” The trial is going in the right direction now, he said. “They see all the wrongdoing they did, and all the evidence points to murder.”

Watching arguments in an observer overflow room, Arbery’s aunt Thea Brooks shook her head at it all.

“Does any of this surprise you?” she asked as we left the courthouse. “What would you expect?”