Sen. Joe Manchin Has Been Fighting to Keep Billions in Subsidies for Fossil Fuel Industry

Manchin is knocking down every reconciliation effort to address the climate crisis. Next up is $121 billion in subsidies for fossil fuel companies. 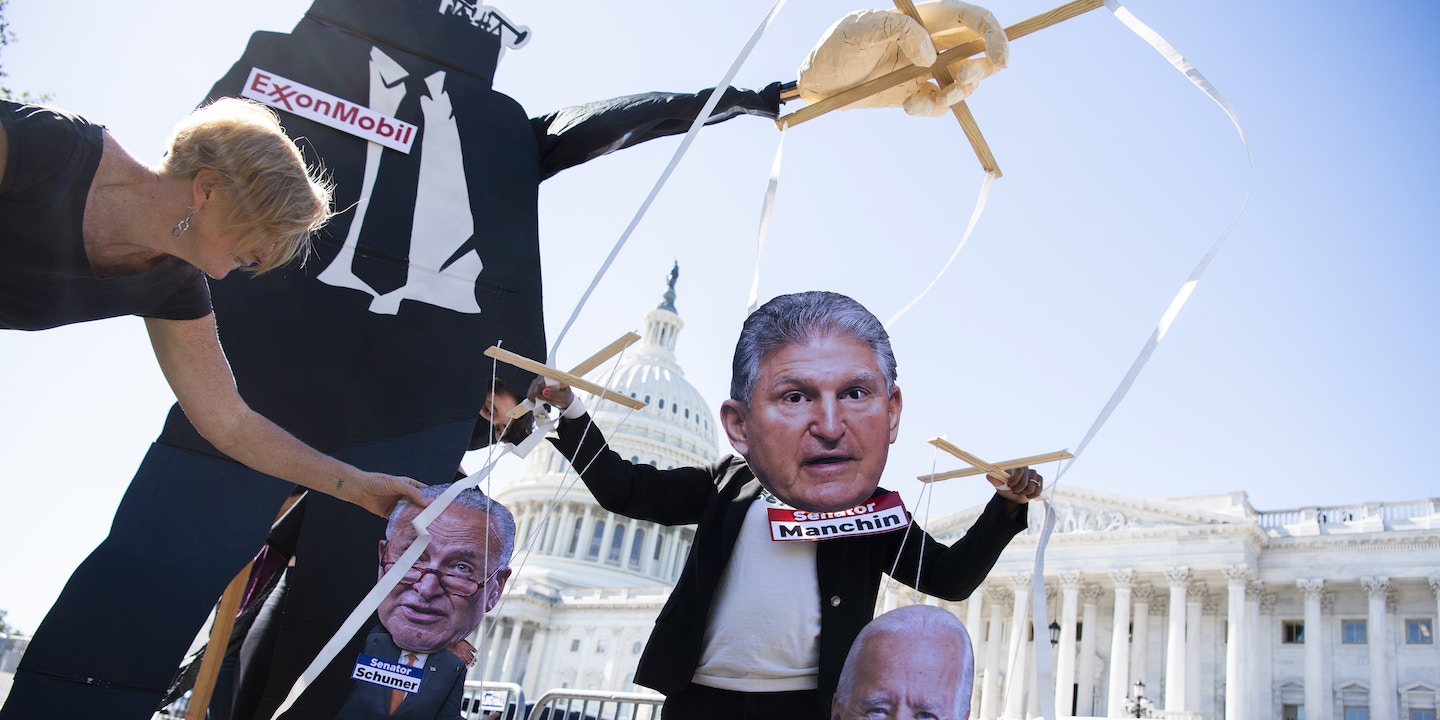 Manchin, whose vote is key to any possibility of passing the already diminished $3.5 trillion reconciliation package into law, said he will not support its most meaningful climate provision. The Clean Electricity Performance Program would have sped up the transition to renewable energy from coal and natural gas by offering power utilities money to make the switch and charging them fines if they failed to do so.

With the cornerstone of President Joe Biden’s climate policy all but dead, Democrats are pushing to get Manchin on board for a suite of tax credits that would incentivize renewables. Manchin has signaled that he’ll only sign on to wind and solar credits if Democrats chip away yet another key provision of Biden’s agenda: the elimination of fossil fuel industry subsidies.

“The climate provisions of this package keep on shrinking.”

Manchin’s proposed policies would effectively mean that reductions in greenhouse gas emissions won through incentivized renewable production could be canceled out by continued government-incentivized fossil fuel production. The fossil fuel industry subsidies on the table for elimination total $121 billion over the next decade.

“The climate provisions of this package keep on shrinking,” said Lukas Ross, a program manager focused on the federal budget at the environmental advocacy group Friends of the Earth. “If subsidy repeal is no longer part of the discussion, a lot of progressives won’t feel compelled to help carry this over the finish line.”

Despite Manchin’s cost-conscious approach — he has demanded a reduced $1.5 trillion price tag for the bill — he has fought to preserve domestic fossil fuel industry subsidies. On the potential repeal of international oil and gas subsidies put into place during the Trump administration, Manchin has been silent.

Manchin, who did not respond to a request for comment, has significant personal investments in the coal industry and is also one of the biggest congressional recipients of fossil fuel industry donations, taking in $400,000 between July and October alone, mostly from the oil and gas sectors, according to E&E News.

The subsidies sometimes go to companies that have supported Manchin, like ExxonMobil. Exxon lobbyist Keith McCoy told an undercover reporter for Greenpeace’s Unearthed that the international tax benefits at stake add up to $1 billion for the corporation.

“Joe Manchin,” McCoy responded when asked about crucial members of Congress. “I talk to his office every week. He is a kingmaker on this because he’s a Democrat from West Virginia, which is a very conservative state. He’s not shy about sort of staking his claim early and completely changing the debate.”

It will be up to progressive Democrats’ political calculus to decide whether the fossil fuel industry subsidies survive negotiations. “Clearly everything is at risk,” said Ross. He added, “Clearly progressives have some leverage.” 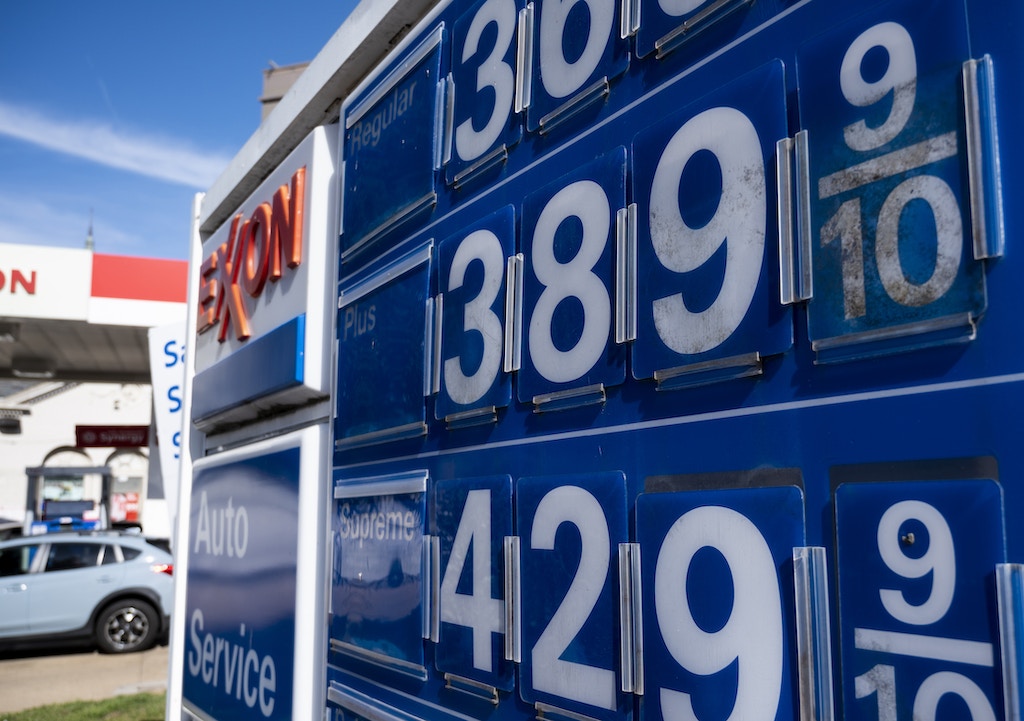 Gas prices are displayed at the Exxon station on Capitol Hill on March 15, 2021.

Building Blocks of a Crisis

The subsidies, which are recorded in law as impenetrable jargon, form the building blocks of a taxpayer-funded system that propels the climate crisis. Analysts have counted well over a dozen fossil fuel industry subsidies, totaling at least $20 billion annually, propping up the U.S. industry.

In his budget proposal, Biden targeted 13 domestic fossil fuel industry subsidies to be slashed, and members of the Congressional Progressive Caucus have fought especially hard for the repeal of four of them.

Among them is a subsidy called the deduction for “intangible drilling costs.” Manchin singled out his desire to preserve the subsidy in a memo to Senate Majority Leader Chuck Schumer, which was leaked to Politico.

The subsidy essentially works by allowing oil and gas companies to write off the costs of drilling from their tax bill right away, even before they have produced any oil or gas. If oil prices are high, over the coming decade that subsidy is poised to boost the profitability of new oil and gas fields by 32 and 33 percent, respectively — a bigger impact by far than any of the 15 other major domestic fossil fuel industry subsidies analyzed in a recent study by the Stockholm Environment Institute and Earth Track. If oil prices are low, the subsidy significantly incentivizes new oil and gas drilling that may not happen otherwise.

The subsidy also keeps potential tax money in oil and gas companies’ pockets that could be used to manage the climate crisis. The Biden administration, which supports killing the subsidy, estimated that its repeal would raise $10.4 billion over the next decade.

Another subsidy is known as “percentage depletion” for oil and gas wells. It allows 15 percent of many oil and gas producers’ income to go tax-free. The deduction is meant to account for the cost of developing the well, but the set percentage in many cases exceeds the actual costs.

The deduction is set to boost profitability of new wells by about 3 or 4 percent over the next decade, according to the Stockholm Environment Institute and Earth Track study. If repealed, the Biden administration estimated that it could instead raise $9.1 billion in revenue over that period.

The two subsidies alone, enacted about a century ago, added billions of dollars in value to new oil and gas projects every year, with some years totaling more than $20 billion in added value, according to another study by the Stockholm Environment Institute.

The two other subsidies on the Democrats’ hit list include “last in, first out,” a bookkeeping trick that allows fossil fuel companies to lower their taxable profits, and a loophole that exempts importers and refiners of tar sands oil from paying into the Oil Spill Liability Trust Fund used to fund oil spill cleanups. Over the next decade, those subsidies will be worth an estimated $15 billion and $352 million, respectively.

Manchin isn’t the only Democrat who has stood in the way of eliminating fossil fuel industry subsidies. Seven moderate House Democrats signed a letter in September asking that the domestic subsidies be preserved. They appeared to get their way: When the latest version of House Democrats’ reconciliation plan was released in September, the domestic subsidy repeals had disappeared. Progressives are imploring party leadership to help get the repeals put back in the bill. 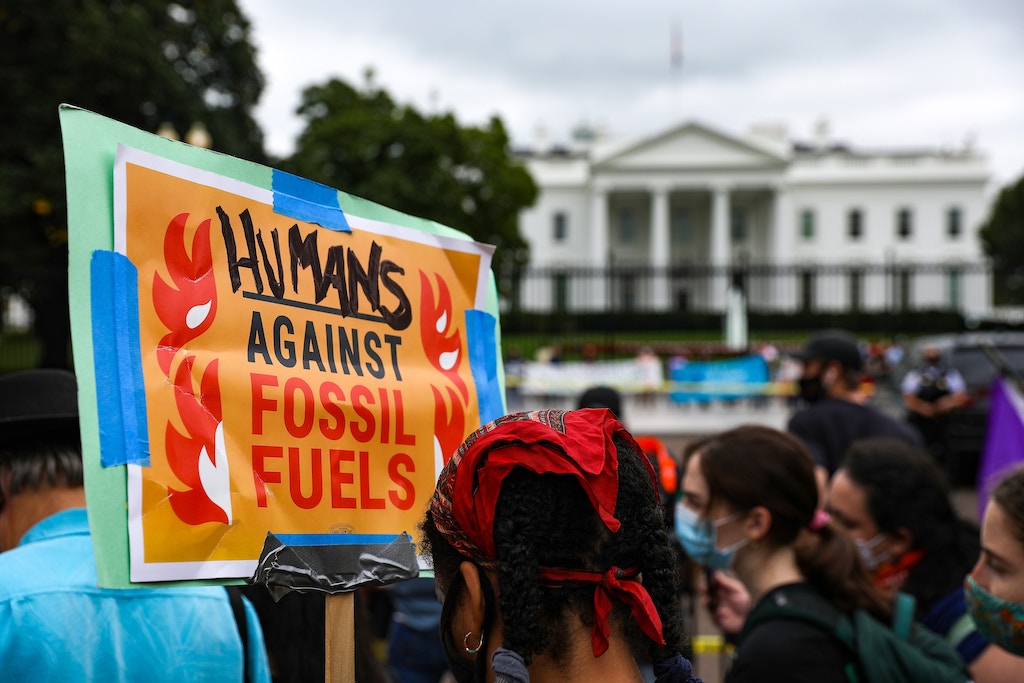 Protesters demonstrate outside the White House on the third day of “People vs. Fossil Fuels” protests on Oct. 13, 2021.

A second set of subsidies that progressives hope to put on the chopping block was born out of President Donald Trump’s 2017 Tax Cuts and Jobs Act. Republicans addressed American corporations avoiding U.S. taxes on their overseas operations with a new tax, which critics point out allows lower rates for overseas corporate earnings. Fossil fuel firms got an even better deal: The bill’s Republican authors made it so that U.S. oil and gas companies owe no taxes on income from extraction abroad.

The carveout appears to benefit only about a dozen companies, according to a Friends of the Earth analysis, since not many companies drill abroad. The beneficiaries include ExxonMobil, Chevron, ConocoPhillips, Marathon Oil, Occidental Petroleum, Murphy Oil, EOG Resources, Hess, APA, Kosmos Energy, Talos Energy, and Ovintiv.

Many of the same companies caught a separate tax break on money their foreign subsidiaries earn on transporting, refining, and selling oil and gas. The companies were able to shift those earnings from one tax category to another, significantly slashing the tax rate.

“It just doesn’t make sense at a time when we need to rapidly decarbonize to still be supporting and entrenching the fossil fuel industry.”

In its 2022 budget proposal, the Biden administration estimated that getting rid of those fossil fuel carveouts could bring in $84.7 billion in revenue over the next decade. The White House estimates that another $1.4 billion could be collected by closing a loophole that allows fossil fuel corporations to claim that royalties and other nontax payments to foreign governments are actually foreign taxes and deduct them from their U.S. tax bill.

The oil and gas industry has fought hard against all the potential changes. ExxonMobil, Chevron, ConocoPhillips, and Occidental all noted the 2017 tax cuts in lobbying disclosures for the first half of 2021.

They have allies among Democrats. House members wrote to Democratic leadership twice this fall asking that reforms to international taxes be removed from the reconciliation bill, arguing in part that any changes should be halted while international negotiations over tax policies are underway.

Among the signatories to both letters was Texas Rep. Henry Cuellar, who has been called “Big Oil’s Favorite Democrat” and has received more than $1 million in oil and gas industry campaign donations over his career. Cuellar also signed on to the letter asking that domestic subsidies remain intact.

Ross, of Friends of the Earth, said, “Democrats are advocating to press pause on what could be the only opportunity to do this.”

The stakes are high: “We’re rapidly running out of time to limit long-term warming to 1.5 degrees,” said Ploy Achakulwisut, co-author of the Stockholm Environment Institute reports, referring to the goal agreed upon in the global Paris climate accord. “It just doesn’t make sense at a time when we need to rapidly decarbonize to still be supporting and entrenching the fossil fuel industry.”