How to Cancel $3.2 Million of Debt for 20,000 People Who Went Through the Carceral System

The Debt Collective, which has focused on other forms of debt, is turning its attention to the crushing financial burden on formerly incarcerated people. Douglas Harper was stunned by a piece of mail he got earlier this month. The letter said the $270 he owed in probate debt had been canceled.

“No one should go to jail because they are unable to pay a private probation fee,” the form letter read. “You no longer owe the balance of this particular debt. It is gone, a gift with no strings attached. You are no longer under any obligation to settle this account with the original creditor, the bill collector, or anyone else. … You are not a loan!”

Harper, a 31-year-old man living in Quitman, Mississippi, had been trying to pay off this debt for nearly two years, all while having his driver’s license suspended for the traffic tickets that led him to start accruing debt in the first place. Instead of going to jail for failure to pay his tickets, he was put on probation, which meant he needed to pay at least an extra $25 each month in probate fees.

“I was so happy to get the letter, it was great, it was a blessing. Now I can get my license back and go back to my job.”

“I was so happy to get the letter, it was great, it was a blessing,” he said. “Now I can get my license back and go back to my job.” Harper works as a supervisor at an oil field where, he said, driving a commercial vehicle is a job requirement.

The letter, sent in both Spanish and English, was one of 20,500 mailed out this month to individuals living in Mississippi and Florida by the Rolling Jubilee Fund, a nonprofit mutual aid group that buys debt off the secondary debt market to cancel it. The fund is affiliated with the Debt Collective, a national union of debtors which has achieved significant policy wins over the last few years, including pressuring the federal Department of Education to cancel billions of dollars in student loans.

The Rolling Jubilee Fund launched in 2012 as an offshoot of the Occupy Wall Street movement, initially focused on canceling medical, tuition, and credit card debt. The effort went dormant over the last five years as activists turned their sights to other projects they felt would bring about more systemic change. On Friday, the group announced a return to extinguishing debts outright, saying it had canceled $3.2 million in probation debt as “an act of solidarity” amid the Covid-19 pandemic. In the portfolio purchased by the group, the average debtor owed $159. The Rolling Jubilee Fund had been able to purchase all of it for just $97,922.

When the Debt Collective realized that buying and erasing debt wasn’t a sustainable strategy for change, it turned its focus toward building a national union of debtors. “We always knew there were limits to this tactic, but we’ve revived it because of the pandemic,” explained Astra Taylor, the group’s co-founder. “In that sense it’s an echo of 2008, we’re in another economic crisis, but it’s also different now. We can see that people were spending their stimulus checks on debt payments. We know that the non-mortgaged debts of retirees have doubled. We know that payday lenders made a killing over the last year. So we wanted to revive the jubilee for this moment, but a difference this time is also our abolishment of probation debt, which ties us into a whole new domain of criminal carceral debt.” The Pennsylvania chapter of the Debt Collective holds a rally outside of Joe Biden’s Philadelphia campaign headquarters, pressuring Biden to cancel student debt, in Philadelphia, Penn., on Jan. 4th, 2021.

The $3.2 million in probate debt cancellation isn’t the only announcement the activists made on Friday. Activists also introduced a new online mutual aid tool that will help Californians cancel their bail bond debt. Using this so-called Abolish Bail Debt Tool, individuals who took out bail debt with co-signers will now be able to dispute the payments easily using state consumer protection law. Good data is hard to come by, but the Debt Collective estimates that more than 1 million people across California hold debt from bail bond contracts and that at least $500 million of that was obtained with a co-signer.

Hannah Appel, co-director of the Debt Collective, said the group’s bail tool came out of California organizing they got involved with in 2017, which was focused on other financial penalties from aggressive policing. “We would show up at other community organization meetings and, while there, offer advice on disputing household debt, and folks would say, ‘Yes, it’s great to be able to dispute all these debts that got worse while I was inside but I actually have debts from my incarceration itself. What can you do about that?’” recalled Appel. “And our answer at the time was nothing.”

The median bail bond in California is $50,000, which is five times higher than the national average. Since most people can’t afford that, they turn to private bail companies that typically charge 10 percent of the total bond amount in nonrefundable premiums and fees. While the California Supreme Court ruled earlier this year that conditioning freedom solely on whether an arrestee can afford bail is unconstitutional, the court’s decision does not affect the millions in bail debt still on the books.

The Debt Collective soon learned that Danica Rodarmel, then a fellow with the San Francisco chapter of the Lawyers’ Committee for Civil Rights Under Law, had developed a new legal application of California consumer protection law for these bail bond contracts. Her strategy, which she was testing out successfully with some clients, said that if one is a co-signer of a bail bond, then they should be treated as a credit lender under California consumer protection law. Among other things, California law requires co-signers to be provided with liability notices outlining their rights and obligations; Rodarmel noticed virtually no one was receiving these notices. Failure to give this notice entitles the co-signer to rescind (or cancel) the contract. While bail bond companies argue their contracts are not consumer credit contracts, so far the courts have disagreed.

With some funding from the San Francisco-based Future Justice Fund and the New York-based Justice Catalyst, the Debt Collective hired a legal fellow as well as a new carceral debt organizer and set out to make an online tool that leveraged Rodarmel’s application of the consumer protections, along with exploring other methods of using the laws to get carceral debt canceled.

The move into carceral debt and the embrace of “abolition” language is relatively new for the Debt Collective, which launched with a focus on household debts, including mortgages, student loans, medical debt, and credit card debt. Appel says the group originally focused on emphasizing debt cancellation as opposed to debt forgiveness, which suggests that a debtor has done something wrong and needs forgiveness.

“We actually didn’t start using ‘debt abolition’ until much more recently — I think it was in 2019 — and it was a very intentional shift due to our movement work with Critical Resistance,” said Appel, referring to a national prison abolition group. “I credit partners like Ruth Wilson Gilmore at CUNY and Dylan Rodríguez at UC Riverside for moving us on this.”

“We actually didn’t start using ‘debt abolition’ until much more recently — I think it was in 2019 — and it was a very intentional shift.”

Discussion of how debt, policing, and incarceration impact one another grew more public in the years following Michael Brown’s death in Ferguson, Missouri. The police killing galvanized what would become the global Black Lives Matter movement. Following Brown’s death, a legal advocacy group, ArchCity Defenders, reported that Ferguson had issued almost 33,000 arrest warrants in 2013 — in a city of 21,000 people — often for trivial offenses like failing to pay a municipal fine or fee. A class-action lawsuit later charged Ferguson with being a modern debtors’ prison, outlining how individuals were routinely jailed for their inability to pay court fees. (That case is still pending.)

Ferguson is not unique. Many cash-strapped municipalities have borrowed heavily over the years to fund basic services. As the Debt Collective highlighted in “Can’t Pay, Won’t Pay,” in order to pay back creditors, cities began more aggressively extracting revenue from some of their poorest residents. Police departments, in particular, began targeting individuals for arrest to help balance their budgets with new fines and fees. 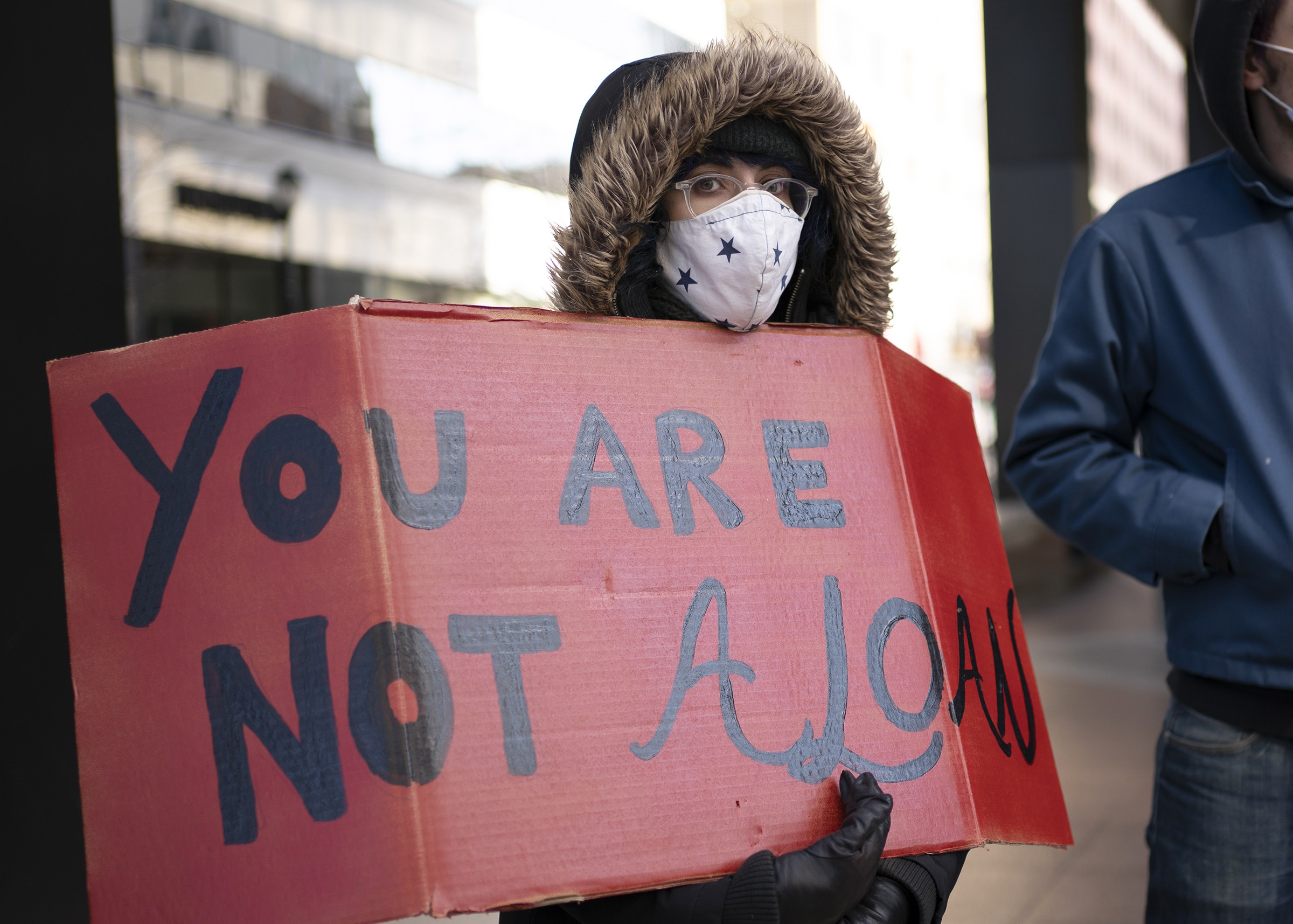 A member of the Philadelphia branch of the Debt Collective holds a sign during a National Week of Action on April 2nd, 2021.

These penalties have not gone unnoticed. In 2020, as the pandemic swept the nation and protests followed the police killings of George Floyd and Breonna Taylor, racial justice activists ramped up pressure on issues related to household and municipal debt. Among other demands, leaders called for rent and mortgage cancellations, moratoria on utility and water shutoffs, and cancellation of student and medical debt.

The Debt Collective’s successes this year in wiping out $3.2 million in probate debt and pressuring the Education Department to cancel billions more in student debt is partly why advocates do not see themselves as proposing something so far-fetched and unrealistic when they call for full debt abolition.

“It’s not an easy task but it’s reasonable,” said Braxton Brewington, a press secretary with the Debt Collective. “And if a group like ours can do this, then surely the government can also negotiate with private companies to take off this debt.”

“If a group like ours can do this, then surely the government can also negotiate with private companies to take off this debt.”

Just this week Fair Fight Action, the voting rights group led by Stacey Abrams, announced that it too had donated $1.34 million to wipe out medical debt from 108,000 people living in five Southern states. Fair Fight Action gave to RIP Medical Debt, which then erased debt with a collective face value of $212 million that had been sold on the secondary market for pennies on the dollar.

The Debt Collective says its ultimate goal is to destigmatize holding debt and work to organize debtors into leveraging their collective power against companies, banks, and creditors. Unlike labor unions, which have been targets of the right wing for decades, debtor organizing has not really been regulated or restricted. This fact gives debt activists energy. “Debtor organizing has the potential to bring millions of people who may never have the option of joining a traditional labor union into the struggle for economic justice,” the Debt Collective wrote in its book.

Douglas Harper, for his part, feels open to learning more about the debtors’ union now that his probate debt has been canceled. “Yeah I’m interested in maybe getting involved,” he said. “So we can change some of the laws because this is ridiculous. People need a little bit of leniency.”