Democrats were accused of manufacturing a white supremacist hoax, but internal plans show that the stunt was rooted in their doomed, Trump-focused strategy. 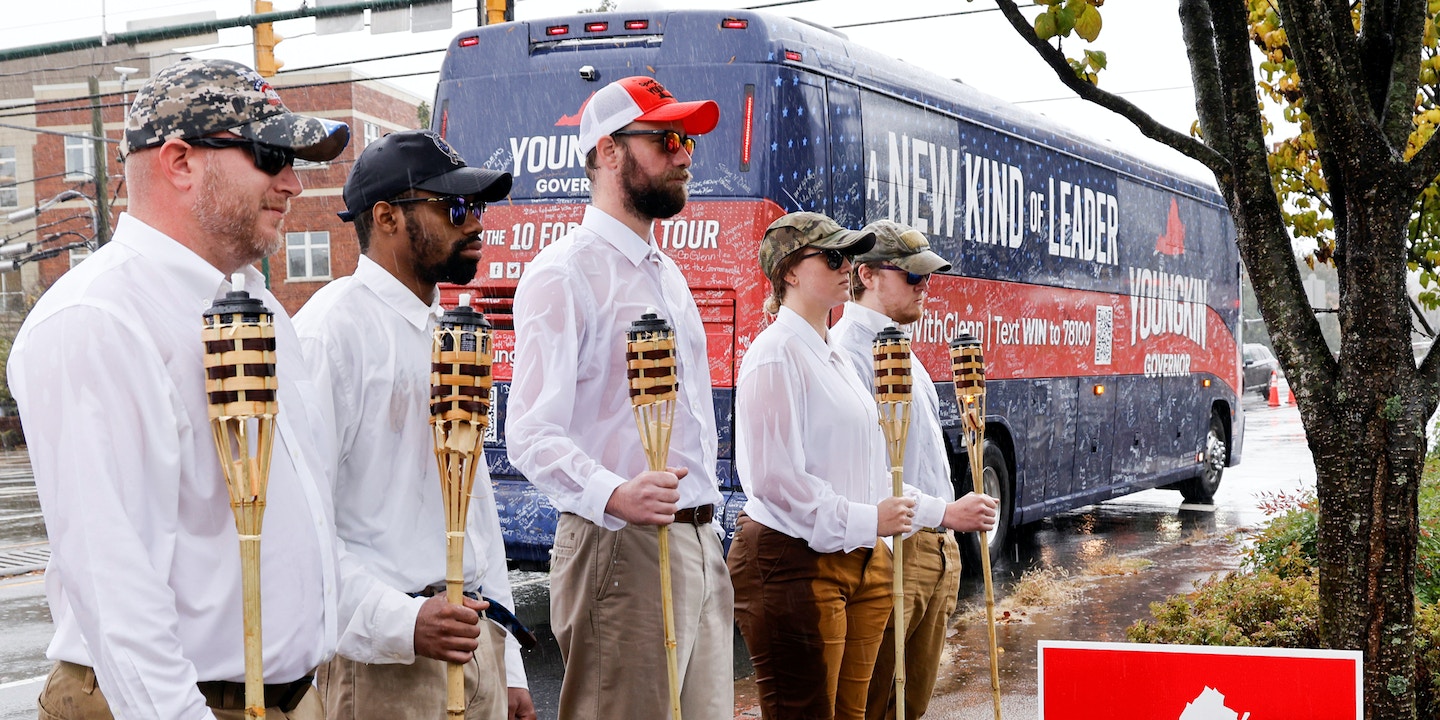 When Lauren Windsor, a Democratic operative working with the Lincoln Project, sent five young people dressed in khakis, white shirts, and sunglasses to hold tiki torches in front of Glenn Youngkin’s campaign bus as it docked in Charlottesville, Virginia, on Friday, she never considered that people might think they were actual white supremacists.

The tiki torch stunt was meant to echo the far-right show of force in the city in 2017 and visually tie Youngkin’s campaign for the Virginia governorship with former President Donald Trump — a manifestation of Democrats’ ultimately doomed strategy not to attack Youngkin on his own terms but to tar him by his association with Trump. Instead, when local media painted the stunt as a real demonstration by white supremacists, and it was amplified by the campaign of Democrat Terry McAuliffe, a former governor of the state, it spiraled out of control, with the Lincoln Project only claiming credit for it much later in the day.

Though Democrats would later be accused of manufacturing a white supremacist hoax, the poorly conceived stunt always intended to be transparent that its intent was to link Youngkin to Trump and the infamous Charlottesville protests and that its author was indeed the Never Trump Republican operation the Lincoln Project, according to interviews with participants and contemporaneous communications reviewed by The Intercept.

At the heart of the stunt gone wrong was a belief among Democratic and Lincoln Project operatives that the key to defeating Youngkin wasn’t a populist attack on the corrupt source of his wealth, the Carlyle Group, as Democrats did effectively with then-presidential candidate Mitt Romney and Bain Capital in 2012, but instead to yoke him to Trump. “We’re here to remind Virginians what an endorsement from Donald Trump really means,” the actors were instructed to say if asked.

It was never intended to appear real, according to Lincoln Project planning emails shared with The Intercept. And the strategy, in general, failed, with Youngkin squarely beating McAuliffe in a state that President Joe Biden and Gov. Ralph Northam won handily in recent years.

But on Friday, the internet and local media took it seriously, particularly after the image was boosted on Twitter by the social media staffer for the McAuliffe campaign — first thinking that the demonstrators were actually white supremacists (one of them is a woman and one is Black), followed by conservative media attempting to identify the participants, and along the way publicly naming young Democratic operatives who had nothing to do with it.

The evening before the event, Windsor and officials at the Lincoln Project exchanged final messages outlining their plan. Windsor shared the emails with The Intercept to demonstrate that she had not intended to create a hoax, allowing us to review her inbox itself to demonstrate that the emails were not doctored. As a condition for providing the emails, she asked that the Lincoln Project officials’ names be kept anonymous, as she didn’t have permission to share them.

The operatives were instructed to reveal to any reporter who asked that they were there on behalf of the Lincoln Project. The problem for the actors: Nobody from the media approached them. They were likely scared off by the drizzle, said Pete Callahan, another Democratic operative.

Windsor made clear in an email Sunday evening that the plan was to be transparent about who they were working for:

1. IAN IS ONLY SPOKESPERSON

Only questions to be answered are:

Who are you with?  We’re here with the Lincoln Project.

And Why are you here?  We’re here to remind Virginians what an endorsement from Donald Trump really means

The instructions also included the mundane (“Brigade should not be on phones — we need the visual to be clean”) to the security-related. “De-escalate if people start threatening you. Do not engage,” the note instructed.” 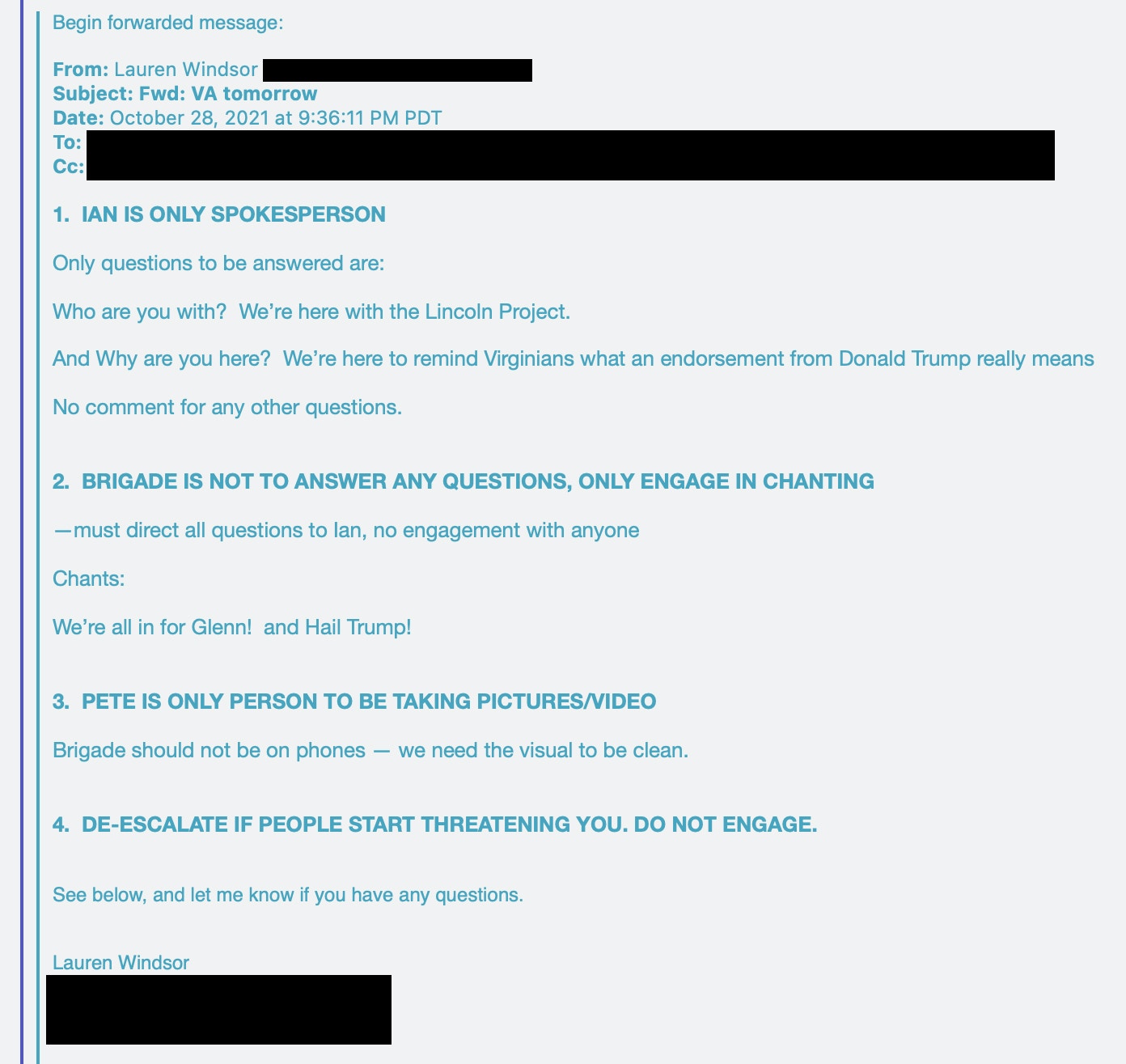 “Understood. Lauren – I’ll text you once we sp, when we arrive, and when we’re clear,” he said. (Gathering at a starting point is abbreviated “sp” in Army lingo.)

The five tiki torch-wielding stunt artists gathered in the rain and, to any reasonable person, clearly appeared to be carrying out a performance. Their khakis in several cases looked more denim than khaki; they were wearing sunglasses in a drizzling rain. Did we mention that only three of the five were white men? Beyond that, the notion that even white supremacists at this point would show up with tiki torches and khakis beggars belief.

The story first started circulating online when a local NBC News reporter posted a photo of the affair:

These men approached @GlennYoungkin’s bus as it pulled up saying what sounded like, “We’re all in for Glenn.” Here they are standing in front of the bus as his campaign event at Guadalajara started.@NBC29 pic.twitter.com/l681ejyBjc As it went viral, both the Lincoln Project and Windsor boosted posts that treated the stunt as real, despite the guidance from the night before. 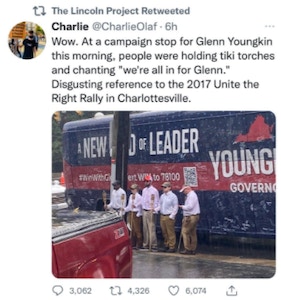 On Twitter, a number of journalists — including me — noted several of these absurdities, speculating that a Democratic-aligned political operation was likely behind it.

Alec Sears, a conservative freelance writer, began hunting down the identities of the five torchbearers, ultimately reporting that he had successfully identified two of them. Sears said on Twitter that he was “confident” in his identification of one operative, while the other bore “a strong resemblance” to a second person he falsely ID’d. The Intercept reviewed the driver’s licenses of both, and both of Sears’s identifications were incorrect. (Sears did not respond to a request for comment.) When the falsely accused Democratic operatives made their social media accounts private, the move was cited as further evidence of their guilt. Only one of the five people involved on the ground was a Democratic operative — Golden — while the rest were hired hands, and The Intercept agreed to keep their names private.

In the afternoon, the Lincoln Project finally took credit, putting out a statement. There was also speculation by some — again, including me — that the Lincoln Project was perhaps only claiming responsibility for the operation after it had gone badly so that it would be blamed on Republicans rather than Democrats. That thinking was too clever by half, as the correspondence shows that the Lincoln Project and its lawyers were involved well ahead of time in conceiving and executing the stunt.

Golden, the on-the-ground organizer of the action, told The Intercept it never occurred to him that people wouldn’t understand that they were pulling a stunt. Just the week before, he said, he and Windsor had been blocked by Youngkin staff from an event. “They know who I am, they know it was me,” said Golden.

Windsor said she called Parkhomenko to tell him that it was a Lincoln Project stunt and huddled with the Lincoln Project about claiming credit. Hours passed, however, before any public statement was made.

“It didn’t make sense to me that it wouldn’t be a stunt. I just assumed nobody would think it’s real.”

Callahan, one of the Democratic operatives, was assigned to be outside the event filming. He confirmed that the other four hired hands were not those identified by Sears and said that the delay in claiming credit came down to Lincoln Project operatives deliberating over their statement. “I was surprised people bit on it, thinking it wasn’t a stunt. It didn’t make sense to me that it wouldn’t be a stunt. I just assumed nobody would think it’s real,” said Callahan.

“A lot of that, at least as far as I know, was because Lincoln, who was kind of calling the play here, wanted to make a statement and take their time doing it. In hindsight, we should have knocked it down right away.”

The credulity with which the stunt was met went beyond the act itself. When the Babylon Bee, a conservative satirical outlet, joked that one of the actors was in fact Northam — a reference to his blackface scandal — actor Debra Messing, a frequent poster of resistance liberal messaging, didn’t seem to see the joke. 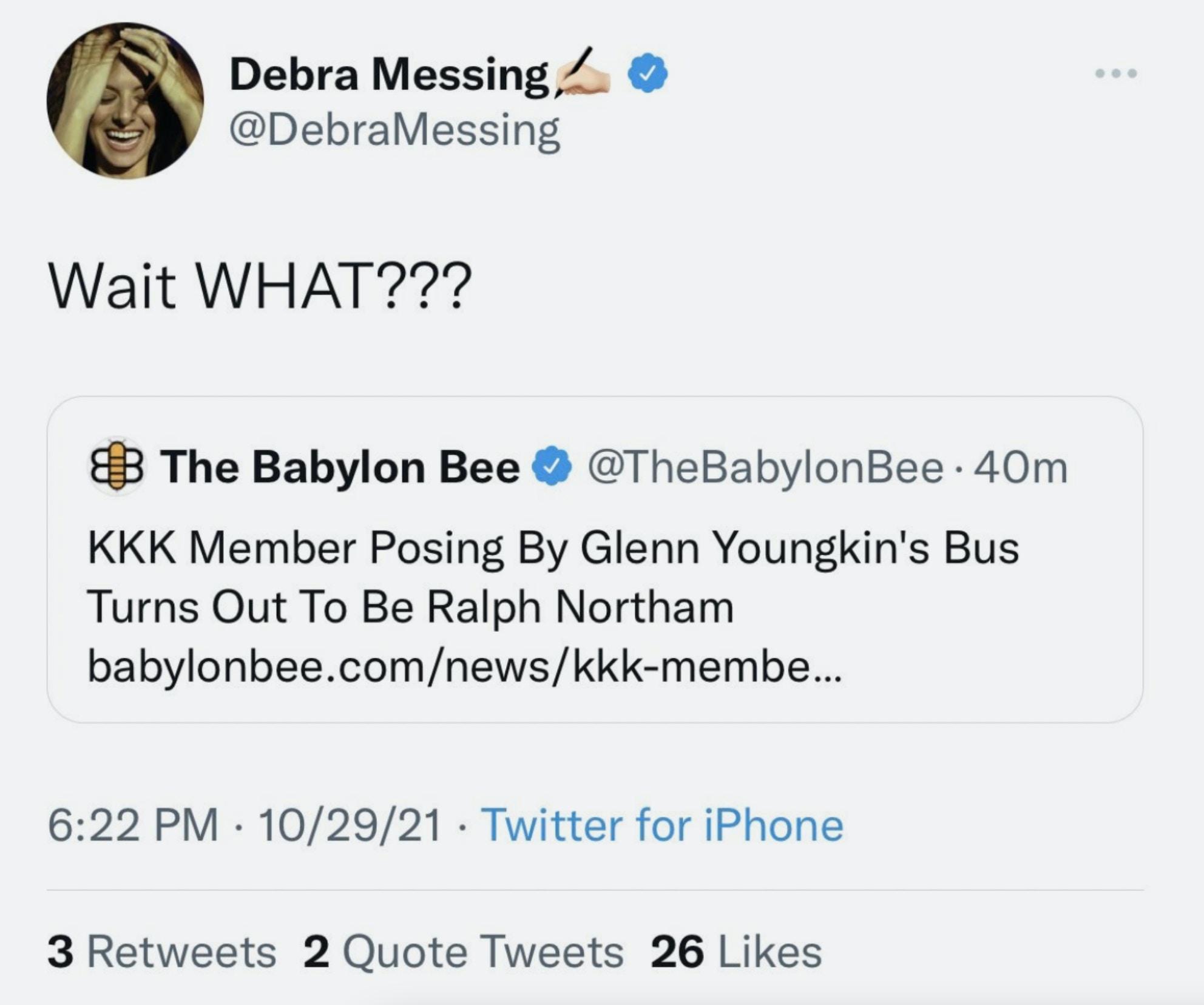 Messing’s gullibility, amusing as it may be, is emblematic of a larger problem facing Democrats. The party elite has organized its electoral operation around frightening voters like Messing with constant invocations of Trump and white supremacists — effective at keeping base voters engaged and angry but good for little else. In Virginia, not enough of the state’s voters bought into it.

The social media staffer on the McAuliffe campaign who initially boosted the image has since made his Twitter account private and has replaced his bio with two simple words: “I’m sorry.”

Correction: November 3, 2021, 4:12 p.m. ET
This story originally stated that Alec Sears is a reporter for the Daily Caller. He is a conservative freelance writer who has written for the Daily Caller but is not on staff. The story was also updated to include tweets by Lauren Windsor and the Lincoln Project elevating the stunt as real.

After publication, Jim Bourg, a Reuters photo editor, wrote on Twitter, “We repeatedly asked them individually their names, who they were with and what group if any they represented and they would not say anything at all.” He later clarified by direct message that he was not at the event but had spoken to the photographer who was, Jonathan Ernst, and Ernst told him he had asked the group to identify themselves but said they didn’t respond. “He then asked campaign staff who said they were not with the campaign and were not supporters but instead demonstrators,” Bourg said. Ernst’s account to Bourg confirmed that the rest of the press corps was inside the event and did not approach the demonstrators, he said.

Golden said he remembered the photographer. “The group was doing the [‘We’re all in for Glenn’] chant. He said, ‘It’s okay, I’m not recording video, just taking stills.’ And then went back inside the event. I did not hear a question from him before or after. I’d like to note that a refusal to answer would seem, to me, to be quite relevant information to report. I don’t want to go up against Reuters here, but, from the emails and our at-length discussions about this, I would have stated who we were with and why we were there.” It’s possible that Ernst asked and, amid the noise, Golden, the group’s designation spokesperson, didn’t hear him, and Ernst decided to ask the campaign instead.

In any event, Ernst had no problem correctly deducing that the demonstration was a stunt. The initial Reuters caption reads: “A small group of demonstrators dressed as ‘Unite the Right’ rally-goers with tiki torches stand on a sidewalk as Republican candidate for governor of Virginia Glenn Youngkin arrives on his bus for a campaign event at a Mexican restaurant in Charlottesville, Virginia, U.S.”  The caption went unnoticed by the media, both social and professional.