In a new documentary, Tareena Shakil, whose marriage to Dennison was first revealed in an Intercept podcast, describes her journey to the Islamic State. 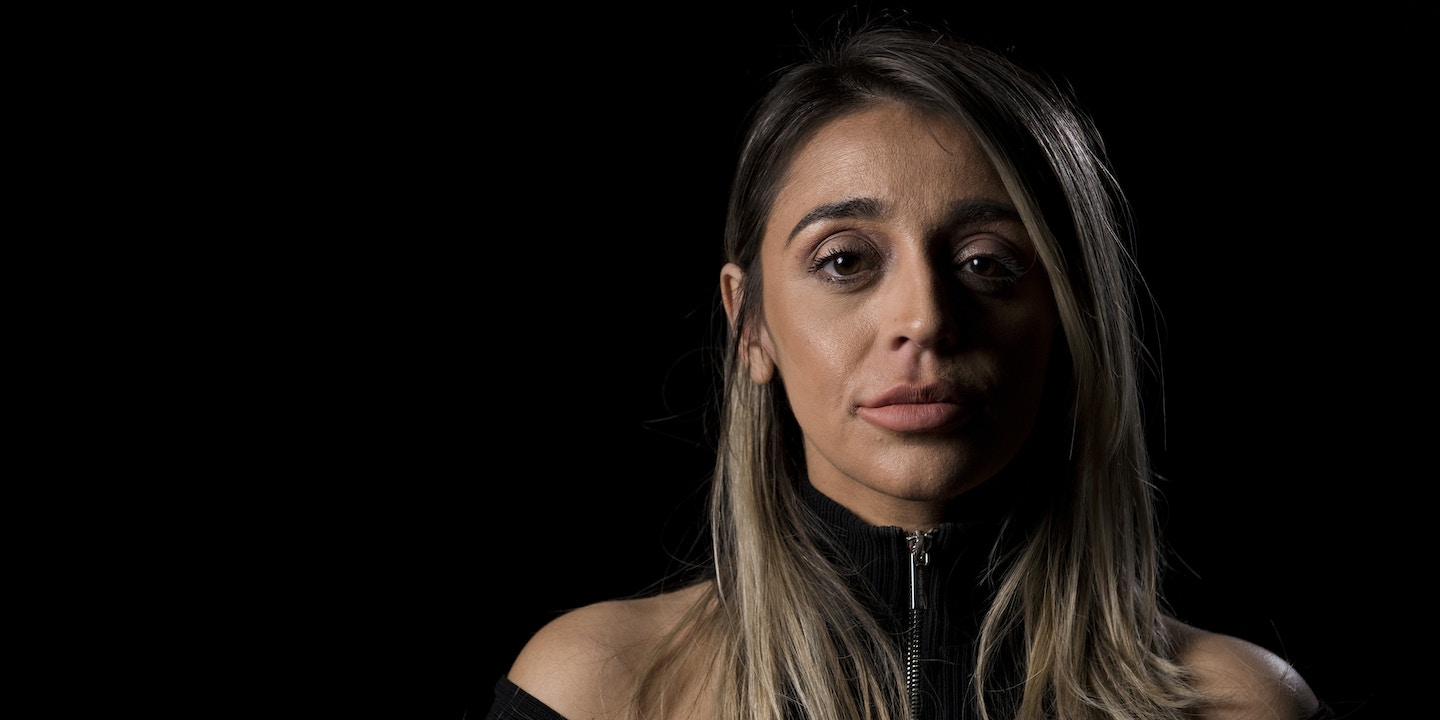 That’s what Tareena Shakil, the first British woman to be prosecuted and convicted for joining the Islamic State, tells filmmaker Abigail Carr in Shakil’s first interview since a British jury convicted her of joining ISIS and encouraging terrorism in 2016. Shakil’s interview was part of “Tareena: Return from ISIS,” a one-hour film that aired Sunday in the United Kingdom on ITV’s current affairs program “Exposure.”

I’d been waiting a long time to hear Shakil tell her story. I spent much of the last three years working on a podcast about the man to whom Shakil was briefly married during her time in Syria: Russell Dennison, an American convert to Islam who joined ISIS as a fighter. Dennison is the subject of “American ISIS,” an eight-part Audible Original documentary podcast released in July from The Intercept and Topic Studios. Dennison secretly communicated with me for months from ISIS-controlled Syria, sending more than 30 hours of recordings about his life and his time with ISIS, until he died in an airstrike in eastern Syria as the so-called caliphate was collapsing.

Dennison was remarkably candid in his recordings, but there was one subject he was reluctant to discuss in detail: his first wife in Syria. Dennison had been shot in the leg during an ISIS battle, leaving him with a pronounced limp. The injury prevented him from being an effective fighter, so in 2014 he settled down in Raqqa and visited a matchmaker in a house filled with dozens of single women waiting to be married. Dennison wanted a Syrian wife, but the ISIS matchmaker preferred to arrange marriages between foreign men and foreign women. He suggested to Dennison a young British woman who’d come to Syria with her 1-year-old son.

“We sit down. I talked to her maybe 15 minutes,” Dennison told me, in a story that’s described in the sixth episode of the podcast. “After that, the person says, ‘I’m busy. You have to go.’ He takes you outside. He asks you, ‘What’s it gonna be? Yes or no?’ Just like that. You see the woman’s face for maybe 10 seconds. You talk to her maybe 20 minutes, and then they ask you if you want to marry. You don’t know who this woman is, where she is from, what her background is — you don’t know anything. So I did this interview twice, and then we just accepted to get married.”

But Dennison told me the marriage didn’t last. “This girl, she just rushed into coming to Syria. When she came, she missed her mother, and she wanted to go back to Britain,” he explained. “And you know, some of these sisters, they do that — they talk to men online. They get excited. They see these Islamic State videos, and they just leave everything, and then they come, they see there’s bombings, there’s killing, there’s war, and they can never go back. So this woman ended up returning back to Britain. There’s nothing else really to say about her.”

Dennison, who later married a Syrian woman and had two daughters with her, never told me the name of his previous wife. After his death, I met with one of his family members in the United States. She asked me not to use her name since she didn’t want to be associated publicly with Dennison. She said the FBI had interviewed her, and agents told her the name of Dennison’s first wife in Syria: Tareena Shakil. Through additional reporting, I was able to confirm that information.

Shakil wasn’t a little-known woman who’d quietly gone to Syria and returned to the U.K. without fanfare. She had become one of the world’s best-known ISIS brides, and now she’s talking for the first time. 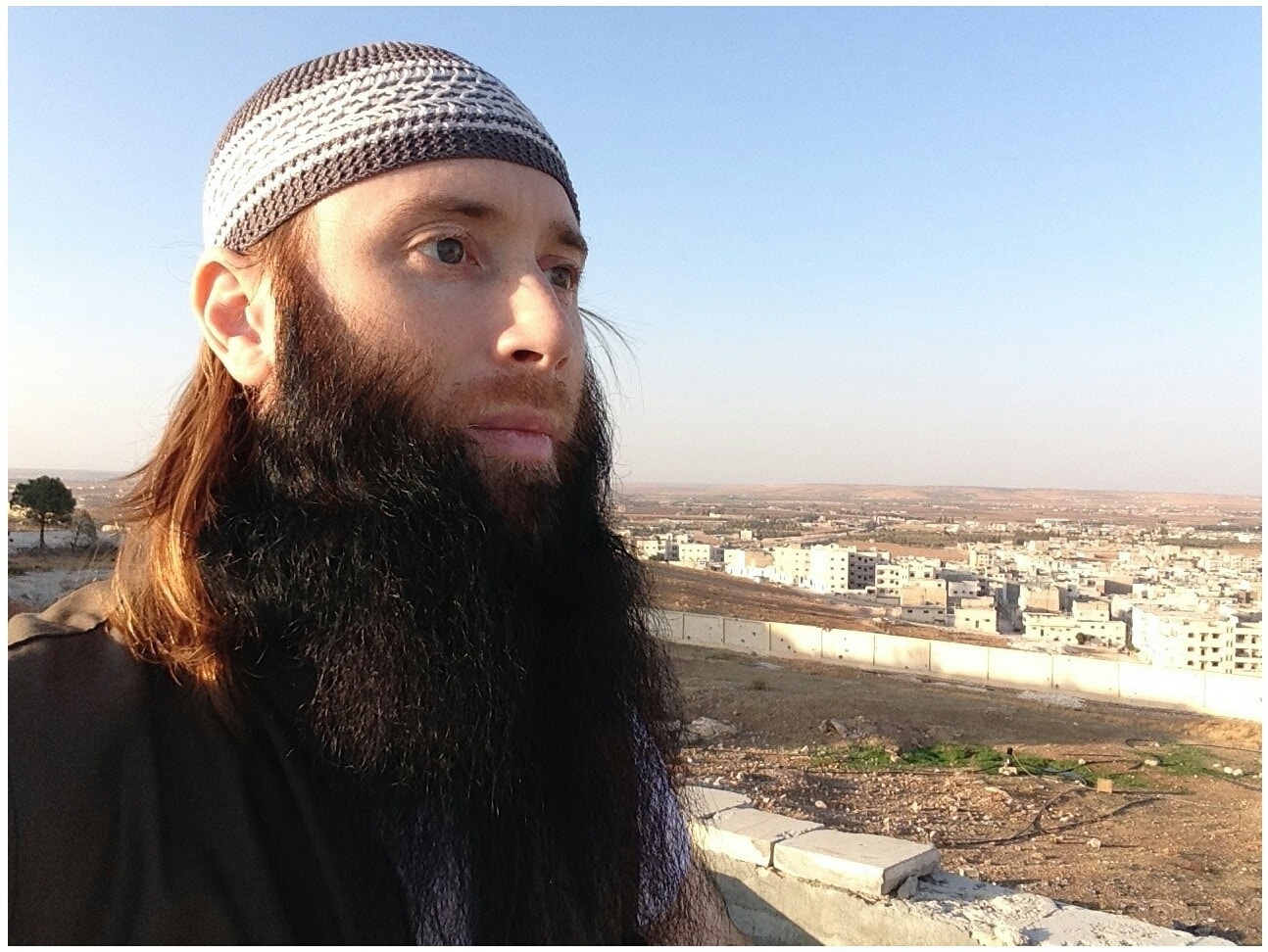 Russell Dennison, at a time when he was dying his red beard black, looks on, with ISIS-controlled Syria in the background.

Early in “Tareena: Return from ISIS,” Shakil and her social worker, Mike Jervis, are in an apartment in Birmingham, England. Shakil’s dark brown hair is long and uncovered, and she’s wearing a black shirt that exposes her neck and collarbones. Jervis shows Shakil a photograph of her, taken in Syria, wearing a burqa and posing next to an AK-47 assault rifle. It was an image that had been printed in newspapers and splashed across screens throughout the United Kingdom.

“So who was that woman?” Jervis asks Shakil.

“Right there, that is someone who’s just lost her way in life, found a very wrong, like, wrong path, and is someone who just needs help,” Shakil answers.

This appears to be the reason Shakil cooperated with the British filmmakers — to make the case to Britons that she’s now a different person from the one who joined ISIS and posed for that photograph. But Shakil still isn’t willing to take full responsibility for what happened. When the filmmakers confront her with conflicting information, she deflects or provides disappointingly vague answers.

Shakil explains that her journey to ISIS started as a result of her first husband, a conservative Muslim who expected her to dress modestly and refrain from using social media. “It wasn’t a particularly happy marriage,” Shakil says.

Shortly after their son’s birth, Shakil’s husband traveled to Yemen. He allegedly threatened to stay there, marry another woman, and establish a new life. Shakil started communicating on Facebook with a handsome Portuguese man named Fábio Poças, who was an ISIS fighter in Syria. “Yeah, he was attractive,” Shakil admits. Within weeks of meeting Poças online, Shakil posted an ISIS flag on her Twitter and Facebook profiles. She then traveled with her toddler son to Turkey. After arriving at a city near the Syrian border, she called a phone number Poças had given her. A van took her and her son to a deserted patch of land along the border. She was told to run to a white truck waiting on the Syrian side. “That was the first time that I’d seen, in real life, the black flag,” Shakil remembers.

Shakil admits that before crossing into Syria, she was aware of ISIS’s brutality and the group’s propaganda videos showing the beheadings of American journalists and British aid workers. “It’s not something I’m happy about now, looking back,” she explains. “But at the time, the only thing I can say is that, you know, I was far from the best version of myself at that time.”

In Syria, Shakil texted her family and told them that she’d joined ISIS. Her family went to the police. Soon Shakil’s picture was on the front page of The Sun, a British tabloid. “The Only Way Is ISIS,” a large headline read. Overnight, Shakil had become infamous.

Shakil has long maintained — and argued at her criminal trial — that she did not go to Syria expecting to join ISIS or marry a fighter. But evidence uncovered by British investigators suggests otherwise. Among the material she read before leaving for Syria was a blog written by a Scottish ISIS bride who described how single women arriving in Syria would be expected to marry jihadis.

In Raqqa, Shakil told the filmmakers, she was taken to a house for single women that was run by a Saudi couple. “I’m here until I get married,” Shakil wrote in a text message to a family member in England. “I had a meeting yesterday with an American, so we will see.” 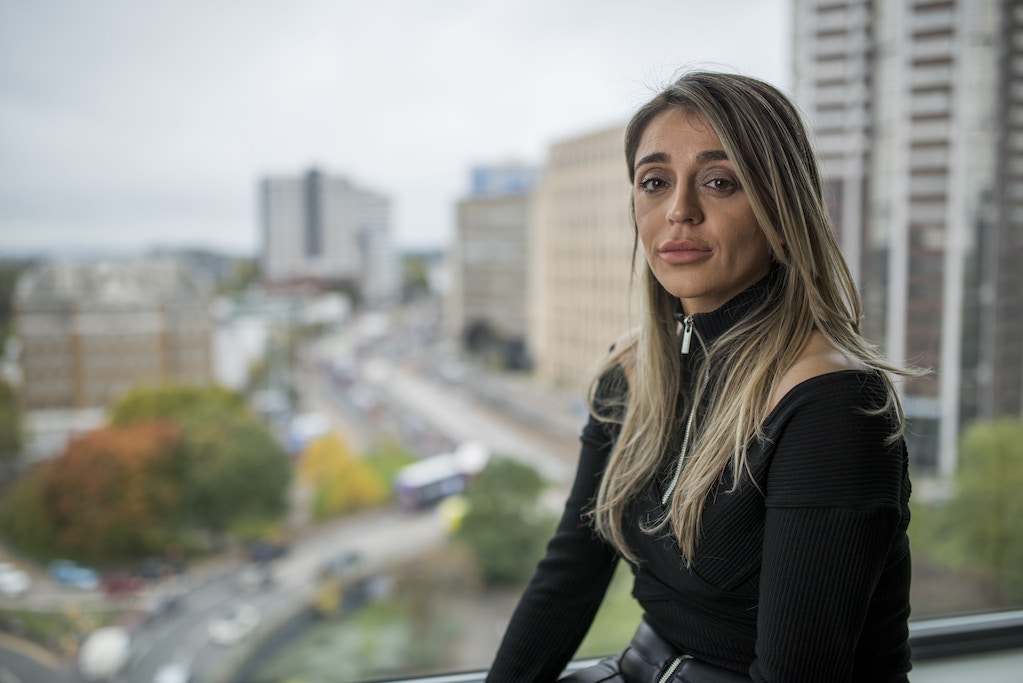 Tareena Shakil poses for a photograph while filming the new documentary “Tareena: Return from ISIS.”

In another text message to a relative in England, Shakil described the American she’d met through the Saudi matchmaker. “He walks with a limp,” she told the relative at the time.

In the recordings he sent to me, Dennison described how ISIS officials provided him and Shakil with a new apartment after they married. Although Shakil did not admit at trial or in her interview with ITV that she lived with Dennison, she sent text messages from Syria in December 2014 that suggested she did.

“I have my own house now,” she wrote in one message.

“I’m so happy now,” she texted in another message. “My new house is lovely.”

When I was reporting “American ISIS,” I contacted Shakil. She declined to talk to me due to parole terms at the time that prohibited her from speaking to journalists. (Shakil served three years in prison and three years of parole.) I provided photographs of Dennison to someone who could show them to Shakil. That person confirmed that Dennison was the American Shakil described in her text messages from Syria and confirmed a detail only Shakil could have known: that Dennison, who had a long red beard, was dying his beard black when she knew him in Raqqa.

From that confirmation, I revealed in “American ISIS” that Shakil had been married to Dennison. In her trial, and in a previous interview she did with the ITV filmmakers in 2018, Shakil suggested that she had never married or lived with an ISIS fighter in Raqqa and did not name Dennison. The ITV filmmakers contacted me in September, and I told them what Dennison had said about his relationship with Shakil and how I’d confirmed that Shakil was Dennison’s first wife in Syria.

The filmmakers then asked Shakil about Dennison and my reporting.

Shakil was only in ISIS-controlled Syria for a few months, and she now says that everything she did there was in an effort to stay alive. She told the filmmakers she escaped Syria by taking a bus with her son out of Raqqa, then a taxi to a spot close to the border, where she ran, with her son in her arms, to Turkish soldiers on the other side. “You need to help me,” she told the soldiers.