A new documentary podcast from The Intercept and Topic Studios offers the most detailed account yet of an American who lived and died inside the Islamic State. 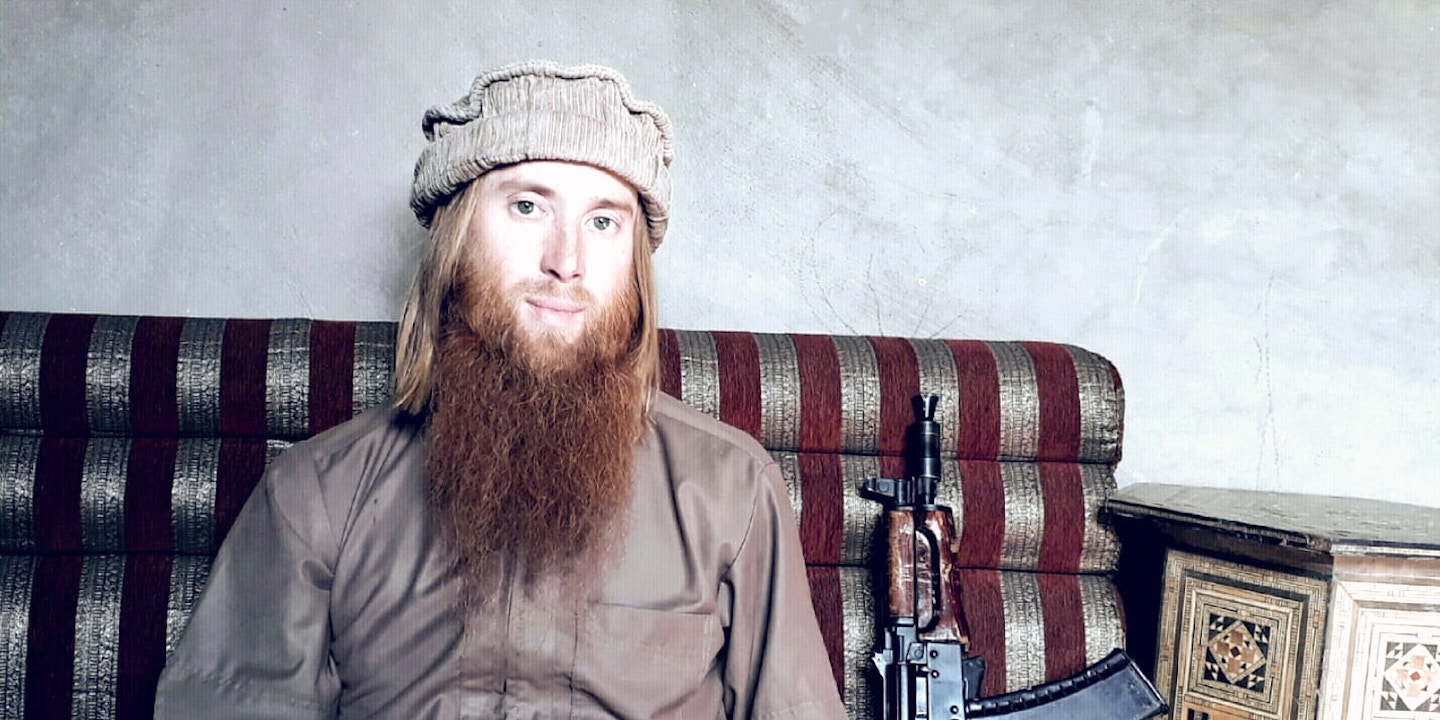 I’d been communicating with Russell Dennison almost daily for more than six months when his messages suddenly stopped coming.

Dennison was a devout Muslim. He believed the time and place of his death were predetermined, that if a bomb were meant for him, it would kill him, regardless of anything he might do to avoid it. That bomb found him in the spring of 2019 in Baghuz, a small village in eastern Syria near the border with Iraq. I learned of his death months later, after a witness told Dennison’s Syrian wife, and she told me.

A red-bearded American who was raised Catholic in the Pennsylvania suburbs, Dennison was among the first Americans to join the Islamic State, or ISIS. I had initially tried to contact him in 2014, after hearing rumors that he’d left the United States to fight in the Syrian civil war. For years, I received no response. Then in August 2018 — after fleeing Raqqa as U.S.-led coalition forces approached ISIS’s de facto capital — Dennison emailed me. He wanted to talk.

In the months that followed, he sent me more than 30 hours of audio recordings through WhatsApp. Speaking mainly at night, with the rumble of coalition airstrikes in the background, he described his conversion to Islam in Pennsylvania, his drift to extremism in Florida, and his journey through the Middle East and across the Lebanese-Syrian border to join the world’s most notorious and feared terrorist group. As our conversation deepened, his recordings took on a confessional quality.

Today, The Intercept and Topic Studios are releasing American ISIS, an eight-episode Audible Original documentary podcast that provides the most detailed and critical account yet of an American who lived and died inside the ISIS caliphate. Dennison’s recordings offer a firsthand view of life in ISIS-controlled territory and reveal new details about how the terrorist group functioned, from its arrival in Syria as an insurgent force to its establishment of a quasi-state governing lands the size of Kentucky.

Nearly two decades after the 9/11 attacks prompted the United States to launch its global “war on terror,” Dennison’s story also serves as a travelogue through a dark and treacherous period when the threat of Islamist terrorism was used to justify a crackdown on American Muslims and ISIS rose from the chaos and violence of the U.S. war in Iraq.

Dennison was imprisoned in his early 20s for selling a small amount of marijuana and later radicalized amid the beaches and strip malls of the Tampa Bay area, where he poured his frustration with U.S. policy into diatribes that won him a devoted following on YouTube — and unwanted attention from the FBI. Dennison told me that the bureau’s pursuit of him and other American Muslims in those years sent him looking for something he felt he couldn’t find in the country of his birth: freedom to practice his faith and lead a pure Islamic life.

He set off for Iraq, Egypt, Jordan, and Lebanon before crossing into Syria in 2012. Once there, he found that the caliphate established by Abu Bakr al-Baghdadi had its own problems, from unaccountable security forces to bad decisions that contributed to the loss of territory and the deaths of hundreds of ISIS fighters, along with thousands of civilians. Dennison’s relationship with ISIS was complex. He wasn’t a blind follower, yet in his conversations with me, he danced around his own culpability for the death and destruction ISIS wrought.

Eliciting Dennison’s story was one of the most intense reporting efforts of my career. He challenged what I thought I knew about the Islamic State and its fighters and what drove them to Syria, Iraq, and other nations in conflict. Even as I came to know him intimately through months of secret communications — and even as I empathized with some aspects of what he told me, like his attempts to smuggle his wife and small children out of ISIS territory as bombs fell around them — I knew there was only one likely ending to our relationship: Dennison would be killed.

In fact, I’d agreed to Dennison’s single term in exchange for his full cooperation with my reporting for American ISIS: I wouldn’t reveal his identity or tell his story until he was killed or captured. But our deal was in truth contingent on Dennison’s death, because he had also told me that he’d never be taken alive.

“Being captured is the last thing that any brother here would want to happen to him,” Dennison told me. “So your option is fighting until the death.”

Dennison’s request presented a host of ethical concerns. Clearly, his goals in sharing his story with me were not the same as my goals in telling it, and I was wary of becoming the vehicle for an attempt to justify or glamorize his choice to join a brutal band of religious extremists. Ultimately, I decided that Dennison’s rare, candid testimony — including his firsthand account of the group’s abuses — would enable me to give listeners a unique and contextualized look inside the ISIS caliphate. Left/Top: Russell Dennison, right, holds the ISIS flag with another militant in Syria.Right/Bottom: Russell Dennison's photo of the destruction from the U.S.-led bombing campaign against ISIS in Syria's Deir Ezzor province.Photos: Obtained by The Intercept

Reporting on ISIS is uniquely challenging. The areas of Syria that the group controlled at the time were largely inaccessible and shrouded in a fog of war. There was a chance that this was a hoax: that the person I was communicating with wasn’t Dennison, or that Dennison wasn’t an ISIS fighter.

To ensure that he was who he said he was — and where he said he was — I asked him for details few others could know. His accounts of his interviews with the FBI matched those I obtained from his FBI file, which is not publicly available. He also sent me photos: pictures of himself as a child in the United States and in Syria with other ISIS fighters, as well as snapshots of documents, including his laminated ISIS identification card and pages from his U.S. passport. He passed every test I devised to authenticate him.

Information Dennison provided from the ground in Syria, in real time, provided further proof of his identity. At the end of 2018 and the beginning of 2019, he lived through the U.S.-led bombing campaign that was intended to dislodge ISIS from the final territory the group controlled in eastern Syria. I reported on these bombings at the time. My stories revealed that the U.S.-led coalition had targeted a hospital, that the bombs had leveled a small town in eastern Syria on New Year’s Eve, and that the United States had stopped providing detailed information about targets in the bombing campaign as it was also dropping propaganda leaflets on surviving ISIS fighters. I can now reveal that one of my sources for these stories was Dennison, who first told me about the attack on the hospital and sent me pictures from the ground. The U.S. Defense Department later confirmed most of Dennison’s information, including the bombing of the hospital.

As I was working on American ISIS, the podcast “Caliphate” — a series about ISIS from the New York Times — imploded, with its primary subject, Shehroze Chaudhry, charged criminally in Canada for perpetrating a terrorist hoax and the Times concluding that the podcast “should not have been produced” with Chaudhry as its protagonist. I knew that comparisons between “Caliphate” and my own project would be inevitable. Its collapse was yet another reminder of what could happen if I wasn’t thorough enough in verifying Dennison’s identity and interrogating his account.

So after Dennison’s death, I tracked down people he had known. Most agreed to be interviewed for the podcast. A religious mentor in Florida described Dennison’s embrace of Salafi jihadism, a hard-line Islamist ideology. A friend of Dennison’s in Michigan told me about visiting him in Iraq, just before he traveled to Lebanon and crossed the border into Syria. One of Dennison’s relatives agreed to talk to me, so long as I didn’t record her or use her name. Everyone I talked to confirmed Dennison’s story.

I also discovered information about Dennison that he had been reluctant to share, including that he was married briefly in Syria to Tareena Shakil, the first British woman to be prosecuted for joining ISIS and a bona fide media sensation in the United Kingdom, where newspapers published photos of her posing with an assault rifle and a handgun.

In addition, I vetted Dennison and his story with a CIA and FBI informant who has close connections to ISIS. I’d sent her a photo of Dennison and asked if she recognized him; she said she didn’t. Months later, after ISIS leader Baghdadi blew himself up in a tunnel in Syria, she contacted me. She said the FBI was taking a new look at Americans who had joined ISIS, and federal agents had showed her a bunch of photos, including one of a red-bearded man.

She recognized Dennison from the picture I’d sent her. Long after Dennison’s death, the FBI was still looking for him.

Sign up for a free 30-day trial and listen to the full American ISIS series on Audible.