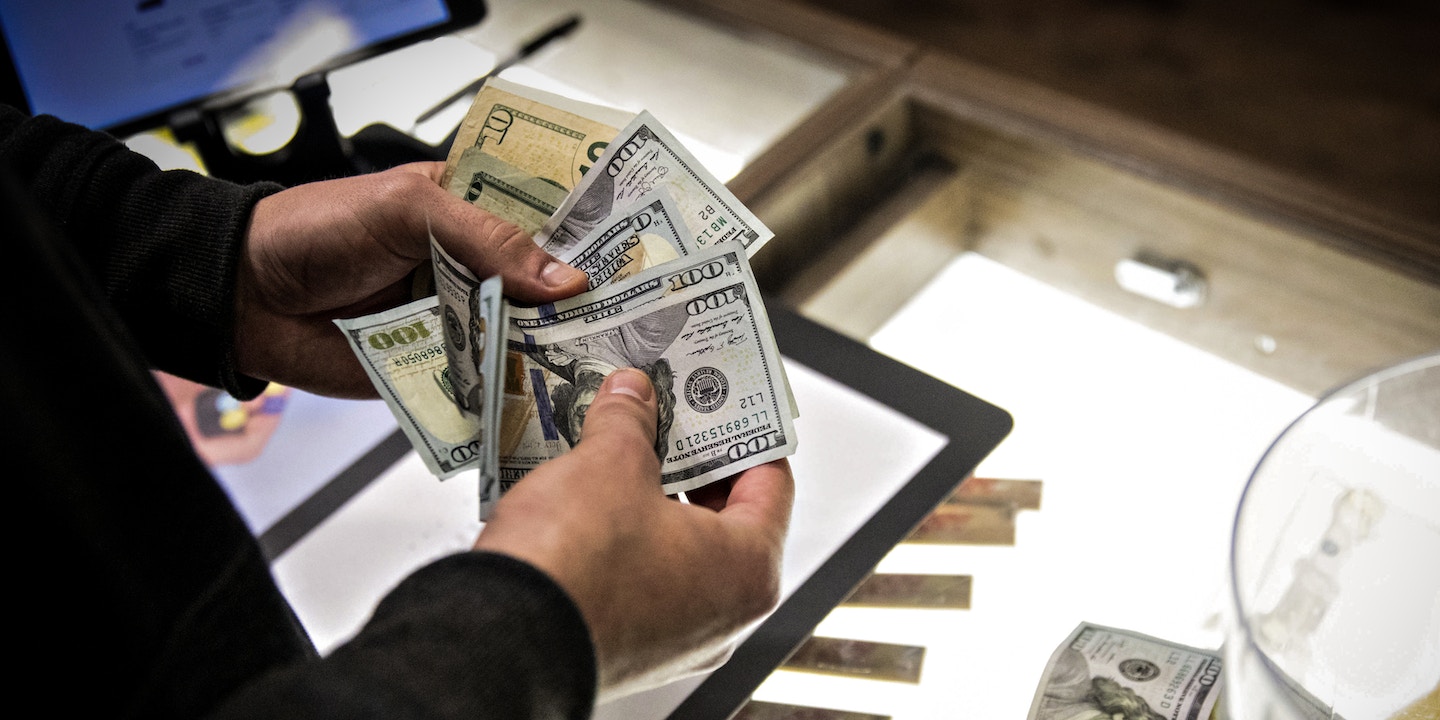 A push by House Democrats to enact marijuana banking reform as an amendment to a must-pass defense bill gained new momentum last week with a show of support from a bipartisan group of senators. But interviews with a number of Senate Democrats show a divided caucus, despite the potential to make progress on one of the party’s longtime policy priorities.

The Secure and Fair Enforcement, or SAFE, Banking Act would shield national banks from federal criminal prosecution when working with state-licensed marijuana businesses — a potentially significant achievement for the industry, which has struggled to obtain capital and has had to rely solely on cash transactions. The House of Representatives attached the bill to its version of the Fiscal Year 2022 National Defense Authorization Act, or NDAA, which passed in September, marking the fifth time the lower chamber has advanced cannabis banking reform in two years. Lawmakers often attach popular, non-defense provisions to the NDAA to quickly get them across the finish line.

While the Senate has yet to pass its version of the NDAA, Senate Armed Services Committee member Jacky Rosen, D-Nev., led panel colleagues Gary Peters, D-Mich.; Angus King, I-Maine; Kevin Cramer, R-N.D.; and Mark Kelly, D-Ariz., in a letter last week urging the inclusion of the House provision in the final NDAA during conference negotiations. Colorado Democratic Sens. Michael Bennet and John Hickenlooper followed with their own letter advocating passage of the SAFE Banking Act using the defense bill.

But they have so far failed to gain the support of leading cannabis advocates who prefer more comprehensive reform, like Senate Majority Leader Chuck Schumer, D-N.Y.; Finance Committee Chair Ron Wyden, D-Ore.; and Sen. Cory Booker, D-N.J. Earlier this year, they released draft legislation to fully end the federal prohibition on marijuana and annul federal nonviolent criminal records. Schumer and Booker have already made it clear that they want to hold off on the banking measure until Congress passes the more comprehensive reform.

Despite the pressure from senators last week to enshrine the SAFE Banking Act in the NDAA, Wyden indicated that the trio hasn’t shifted from that position. “We’re going to keep talking, but Sen. Schumer, Sen. Booker, and I have agreed that we’ll stay this course,” Wyden told reporters Monday, noting that “the federal government has got to end this era of reefer madness.”

The political calculus of holding out is unclear given President Joe Biden’s long-standing opposition to cannabis legalization and the daunting task of securing 60 votes in the Senate for legalization or decriminalization. With Republican leadership maintaining steadfast opposition to large reforms, attaching modest equity reforms to provisions like the SAFE Banking Act, which has numerous Republican co-sponsors, may be the only pathway for progress on marijuana issues.

“They’ve got to get it done. If the Republicans get back in charge, which I think we will, the bills are never going to happen because our leadership doesn’t like them,” Sen. Rand Paul, R-Ky., a co-sponsor of the SAFE Banking Act, acknowledged.

For Wyden, Booker, and Schumer, their resolute position to wait for comprehensive reform represents a departure from their previous stances. Wyden is currently a co-sponsor of the standalone version of the SAFE Banking Act, and Schumer has previously supported using high-profile packages to pass marijuana banking protections, most notably as a part of coronavirus relief legislation he proposed last year. Booker also previously co-sponsored earlier versions of the SAFE Banking Act.

The split between the high-ranking and more junior senators is representative of the broader disagreement Democrats have wrestled with in enacting their agenda: Should they pursue modest bipartisan reforms now or hold up consensus legislation like the banking bill as leverage to achieve more sweeping change?

Rosen doesn’t disagree with the need for full legalization but is endorsing a more incremental approach to reform than the all-or-nothing stance taken by Wyden, Booker, and Schumer. “I think we have to do it all, but I still want to be sure that businesses operate safely, particularly in my state and the other states — that they have both medical and legal marijuana, that they’re able to take care of that,” she told The Intercept on Tuesday.

Hickenlooper feels similarly, saying Monday: “I agree with Sen. Wyden that there’s no reason not to be decertifying it. At the same time, we’ve got an industry with hundreds of thousands, many millions, hundreds of millions of dollars in cash. It’s not safe.”

The split between the high-ranking and more junior senators is representative of the broader disagreement Democrats have wrestled with in enacting their agenda.

Other Senate Democrats have indicated that caucus leaders aren’t placing priority on the SAFE Banking Act’s inclusion in the NDAA anyway. For example, Senate Armed Services Committee Chair Jack Reed, D-R.I., who will lead conference negotiations with the House, told The Intercept on Tuesday that he hasn’t discussed the provision with Schumer, while Democratic Chief Deputy Whip Sen. Brian Schatz, D-Hawaii, a co-sponsor of the SAFE Banking Act, said he hasn’t thought about it.

Meanwhile, Sen. Jeanne Shaheen, D-N.H., a senior member of the Senate Armed Services Committee, was dismissive of the possibility of including the provision in the defense bill. “There are a lot of things that are being talked about putting on the NDAA,” she told The Intercept on Tuesday. “I doubt most of them will make it.”

Sen. Sherrod Brown, D-Ohio, a key figure in the debate over the SAFE Banking Act as chair of the Senate Banking Committee, expressed skepticism too. “I don’t think so. That’s too much, too imminent,” he told The Intercept.

Brown represents a more conciliatory position on cannabis reform within his caucus. While he’s doubtful that the SAFE Banking Act will make it into the NDAA, he doesn’t have as hard-line a stance on waiting for full legalization as Wyden, Schumer, and Booker. Instead, he said that he could support the bill if it comes with sentencing reform, which the House NDAA amendment does not currently include.

Cramer, the sole Republican to sign Rosen’s letter last week, affirmed that such measures might not be a deal breaker for Republicans. When asked Monday if pairing the SAFE Banking Act with equity reforms would weaken Republican support, he told The Intercept that Democrats could likely make substantial headway on marijuana justice reforms that fall short of full decriminalization or legalization without endangering the must-pass bill’s odds in the Senate.

“If it came back from the conference committee with [sentencing reforms], for me to be a no, it would have to be pretty extreme.”

Despite the pessimism shown by Senate Democratic leaders on the likelihood of the SAFE Banking Act making it into the final NDAA, they will need to contend with House negotiators during conference discussions. House Armed Services Committee Chair Adam Smith, D-Wash., is a co-sponsor of the original measure, and proponents in the House have continued to advocate for its inclusion. The bill’s author, Rep. Ed Perlmutter, D-Colo., tweeted Monday in support of Rosen’s letter as well as Hickenlooper and Bennet’s: “By including #SafeBanking in the final NDAA, we can safeguard our financial system, reduce the public safety risk & better support small & minority-owned businesses.” Because of national banks’ hesitation to work with state-licensed cannabis businesses due to federal prohibition, many entrepreneurs today struggle to obtain loans, keeping local markets highly concentrated. Existing businesses cannot accept credit cards and must rely solely on cash, exposing them to burglaries and restricting their workers’ access to capital. The all-cash nature of the business also opens the door for a litany of financial crimes and makes the tracking of illicit actors in the space difficult for state and federal authorities.

Nevertheless, the harms to the communities of color that have been disproportionately targeted by the federal government’s designation of cannabis as a Schedule I controlled substance go much further. Advocates of full legalization first like Booker view passage of the SAFE Banking Act alone as a lost opportunity to keep momentum strong to deliver justice for those who have suffered as a result of federal prohibition.

But proponents of the SAFE Banking Act’s inclusion in the NDAA do not believe that consensus will form any time soon on decriminalization or particularly legalization, considering how controversial those positions are to some moderate Democrats and most Republicans. And opposition from Republican leadership means that even modest reforms are likely to be dead on arrival should Democrats lose control of the chamber in 2022.