Joe Manchin Is Faking His Fears of Inflation

Manchin claims that concern for the economy drives his opposition to Build Back Better — but his favorite wonks don’t share his suspicion. 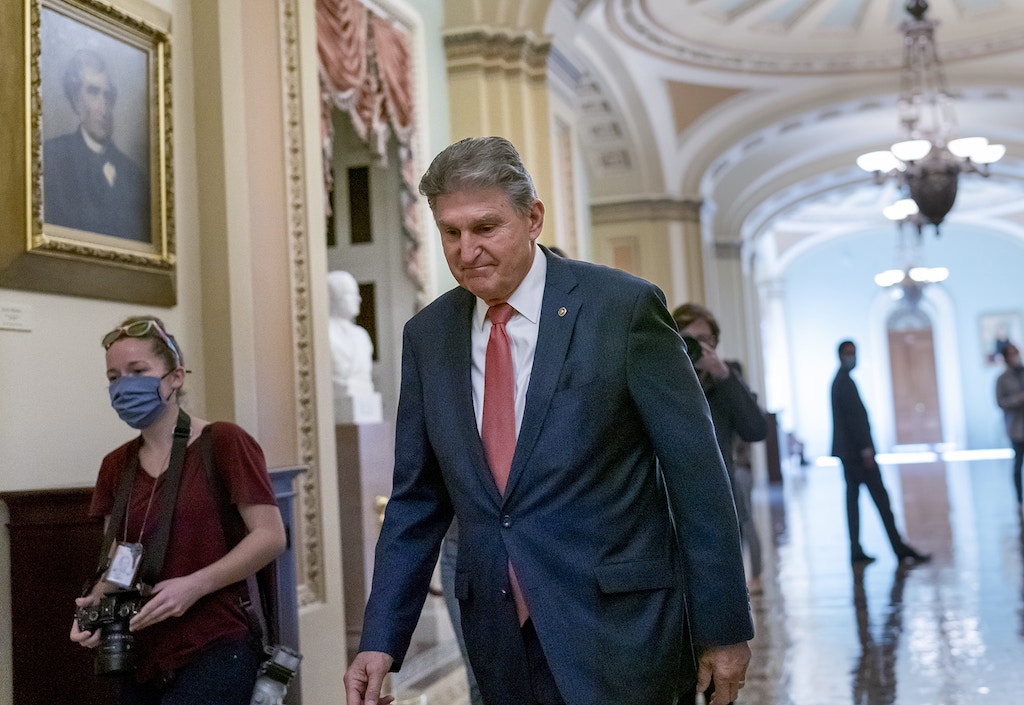 On Sunday, Democratic Sen. Joe Manchin of West Virginia appeared on Fox News to explain that he “cannot vote” for the centerpiece of President Joe Biden’s agenda: the Build Back Better bill the House of Representatives passed in November.

Manchin mentioned inflation four times in the 14-minute interview. Prices in the U.S. went up 6.8 percent over the 12 months from November 2020 to November 2021.

He then released a statement on his decision. In it, he said that his worries about the bill “have only increased as … inflation rises” and that “every hard-working American” is experiencing “inflation taxes that are real and harmful.”

Taking its cue from what Manchin said, the New York Times ran a story with the headline “The Path Ahead for Biden: Overcome Manchin’s Inflation Fears.”

But these fears cannot be squared with Manchin’s words less than two months ago.

On November 1, Manchin proclaimed that the supposed $1.75 trillion increase in spending for the then-current framework for Build Back Better was a sham. “What I see are shell games and budget gimmicks that make the real cost of this so-called ‘$1.75 trillion dollar’ bill estimated to be twice as high if the programs are extended or made permanent,” he said in a statement. “That is recipe for economic crisis.”

Even if the bill had passed and ended up increasing spending by twice the official $1.75 trillion number, or $3.5 trillion, this would be spread over the next decade, during which time the Congressional Budget Office projects that the U.S. gross domestic project will be $288 trillion. $3.5 trillion is only 1.2 percent of $288 trillion. And the bill proposes new taxes to help cover its projected spending.

But who “estimated,” as Manchin said, that the real spending in the Build Back Better bill would be twice as high as the official number? The answer is the staff of the Penn Wharton Budget Model, analysts at the Wharton School of Business at the University of Pennsylvania. The PWBM, as it’s called, produces one of the many budget estimates that come from think tanks and governmental institutions. Their funding comes largely from various financial and corporate elites.

Axios reported in November that Penn Wharton analysts had “been helping Manchin sort through how much each program costs” and that he “has been consulting with Penn Wharton experts throughout the process and trusts the model.” Politico wrote that “while there are many economic analyses of the bill out there, the PWBM has proven influential with one particularly important audience: Sen. Joe Manchin, who takes its findings seriously.”

One might then reasonably assume, given Manchin’s anxieties, that Penn Wharton had released a study finding that the Build Back Better Act would indeed fuel significantly greater inflation.

But the reality is almost exactly the opposite. The group published an analysis on Friday stating that as written, the bill “would add 0.1 to 0.2 percentage points” to inflation for the next two years. It then “would reduce inflation later in the decade.” If temporary provisions in the bill as written were made permanent, it would add “up to a third of a percentage point to near-term inflation and have a negligible impact on inflation in later years.” Moreover, “impact on inflation could be largely mitigated … if monetary policy responds to counteract the increase in consumer demand.”

In other words, when the PWBM came up with an answer that Manchin could cite to oppose the Build Back Better agenda, he cited it loudly and reporters heard about how much he trusted the model. But when the same model offered an answer he didn’t like, he ignored it. (The White House cited Penn Wharton’s inflation analysis with clear exasperation in a statement on Manchin.)

New reporting in the Washington Post further indicates that Manchin’s stated concerns about inflation are not genuine. According to the Post, Manchin last week proposed a different version of the Build Back Better bill on the same scale as previous proposals — which thus should logically contribute to inflation to the same approximate degree — but with different components.

Manchin’s true motivation is unclear, but there are some clues. In his statement this Sunday, he decried the possibility that the Build Back Better bill would “dramatically reshape our society.” This is a reasonable concern: The expansion of the Child Tax Credit has reduced child poverty in the U.S. by 40 percent. But Manchin remains opposed to its extension, and HuffPost reports that he has said privately that he believes poor parents will spend the extra money on drugs rather than their children.

Manchin’s office did not immediately respond to a request for comment.