It’s not often that a White House press secretary’s faux pas prompts a policy change, but when Psaki scoffed at the idea of sending Americans free rapid tests, she hit a nerve. 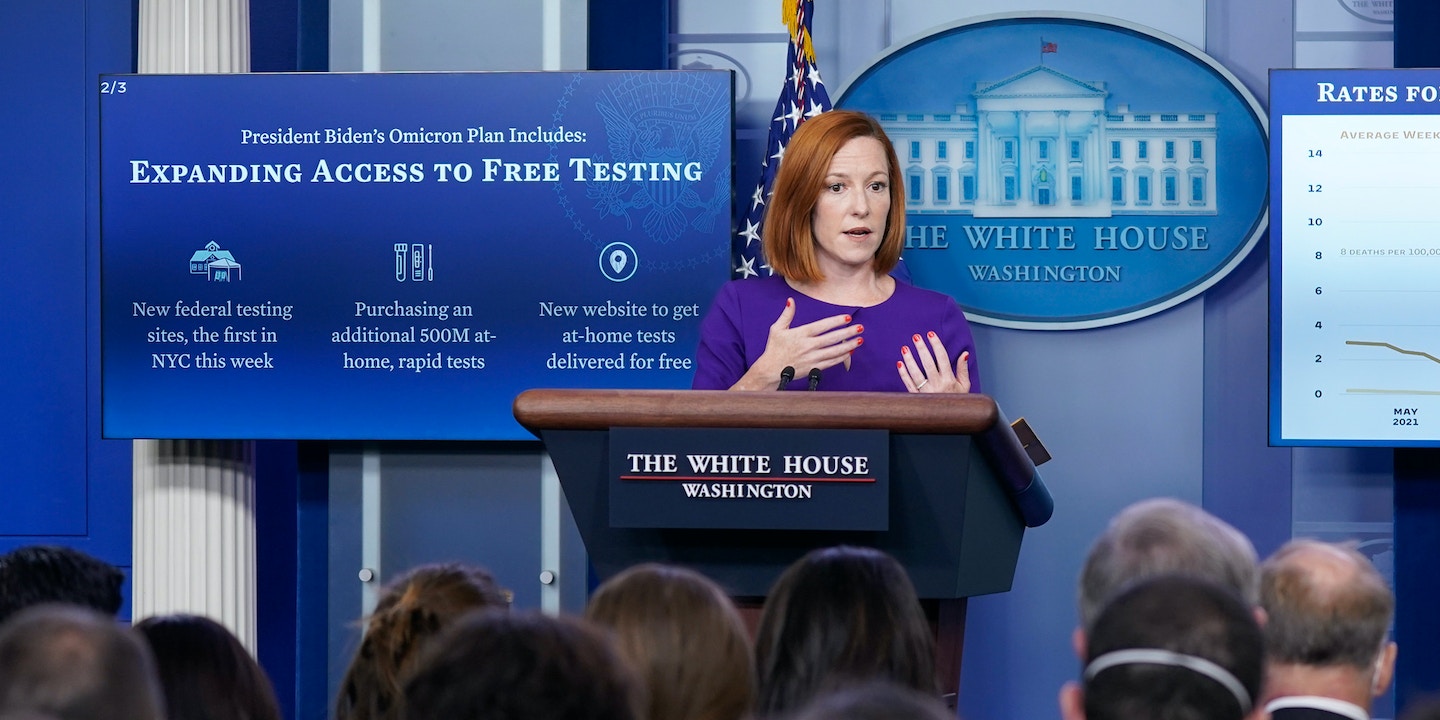 Two weeks after White House press secretary Jen Psaki triggered an avalanche of social media outrage by mocking the idea that the government should send Americans free rapid antigen tests for Covid-19, she explained Tuesday that President Joe Biden had decided to do just that.

The abrupt policy reversal, subsequently confirmed by Biden, was framed as part of the president’s response to the new threat posed by the omicron variant. But that more infectious and vaccine-resistant strain had already reached the United States on December 6, when Psaki suggested that it would be absurd to send at-home tests to every American.

The press secretary’s sarcastic tone that day, in response to a question from the even-keeled Mara Liasson of NPR about why the at-home tests are so much harder to come by in the U.S. than in the United Kingdom — where free packs of seven rapid tests are given to anyone who asks for them — dismayed public health experts, who see early detection through at-home antigen testing as a way to curb transmission of the virus.

Many are ridiculing this dismissive and out of touch take by @PressSec on Covid tests.

But for me it’s the ‘how much does it cost’ part.

We spent BILLIONS AND BILLIONS on vaccines that we would never consider charging for.

Tests should be no different.pic.twitter.com/bf7JnpYTbH

“Why not just make ’em free and give ’em out, make them available everywhere?” Liasson asked Psaki.

“Should we just send one to every American?” Psaki shot back, her voice dripping with sarcasm.

Psaki’s combative style in response to absurd questions from right-wing journalists has made her a hero to many Biden supporters, but the video of her exchange with Liasson jumped the partisan divide and enraged many Democrats because it also focused attention on how expensive rapid tests are in the U.S. compared with Europe, where governments make them either free or available for a fraction of the cost.

The press secretary has long been a lightning rod for criticism from the right — and from Russia — but the bipartisan anger at her flip response to Liasson’s question seems to have forced the Biden administration to revise the unpopular policy on home testing that she found it so hard to defend.

So, as Biden told the nation Tuesday afternoon, Americans who want to know if they are infected will soon have an alternative to hunting for the scarce tests in stores, paying inflated retail prices for any they can find, and then possibly getting reimbursed by private insurance companies.

Starting in January, when the first of 500 million test kits purchased by the government should be available, Americans will be able to order home delivery of free rapid tests online.

While Psaki’s critics on the far right celebrated the fact that she was forced to defend the very policy she had ridiculed just two weeks ago — and a CNN reporter asked her if she had “reflected on” her tone that day — the whole episode could be seen as a rare example of the daily White House briefing for once serving a useful purpose.

In retrospect, it seems clear that Psaki resorted to sarcasm in an attempt to end the exchange with Liasson mainly because there was no good answer as to why the U.S. did not just emulate the U.K. by providing free at-home tests to anyone who wants them. Once the administration became aware of the depth of anger in the country at the more limited testing policy Psaki struggled to defend, it was in Biden’s political interest to change course and adopt a more popular policy — which is essentially the one Liasson had suggested.

In an era in which the news media is largely set up to report on and turbocharge whatever partisan outrage it detects on social networks, the anger generated by Psaki’s attempt to ridicule Liasson’s question had the end result of forcing the government to change a bad policy.

A senior administration official told reporters at a separate background briefing that the U.S. will not, unfortunately, adopt a key part of the U.K. testing strategy, which is to have a mechanism for people who test themselves at home to report their results to national public health officials, to enable contact tracing and better track the spread of the virus.

Even public health experts who welcomed the new testing strategy suggested that it might not be ambitious enough.

“500 million free rapid tests by request sometime in January is totally inadequate,” Dr. Eric Topol, a professor of molecular medicine at Scripps Research who has served on Food and Drug Administration advisory committees, wrote Tuesday. “We need several billion of these, and have needed them for over a year to help prevent spread.”

“It’s good that the administration has finally responded to the loud voices of frustration,” Topol added, “but it’s an exemplar of too little, too late.”

Topol also suggested that as omicron spreads and many Americans still rely on the scant protection provided by cloth masks, the federal government should add a supply of KN95 masks to the care packages sent to every household.