Joe Biden made history by calling for changes to the filibuster to pass voting rights legislation. Activists and civil rights groups aren’t having it. 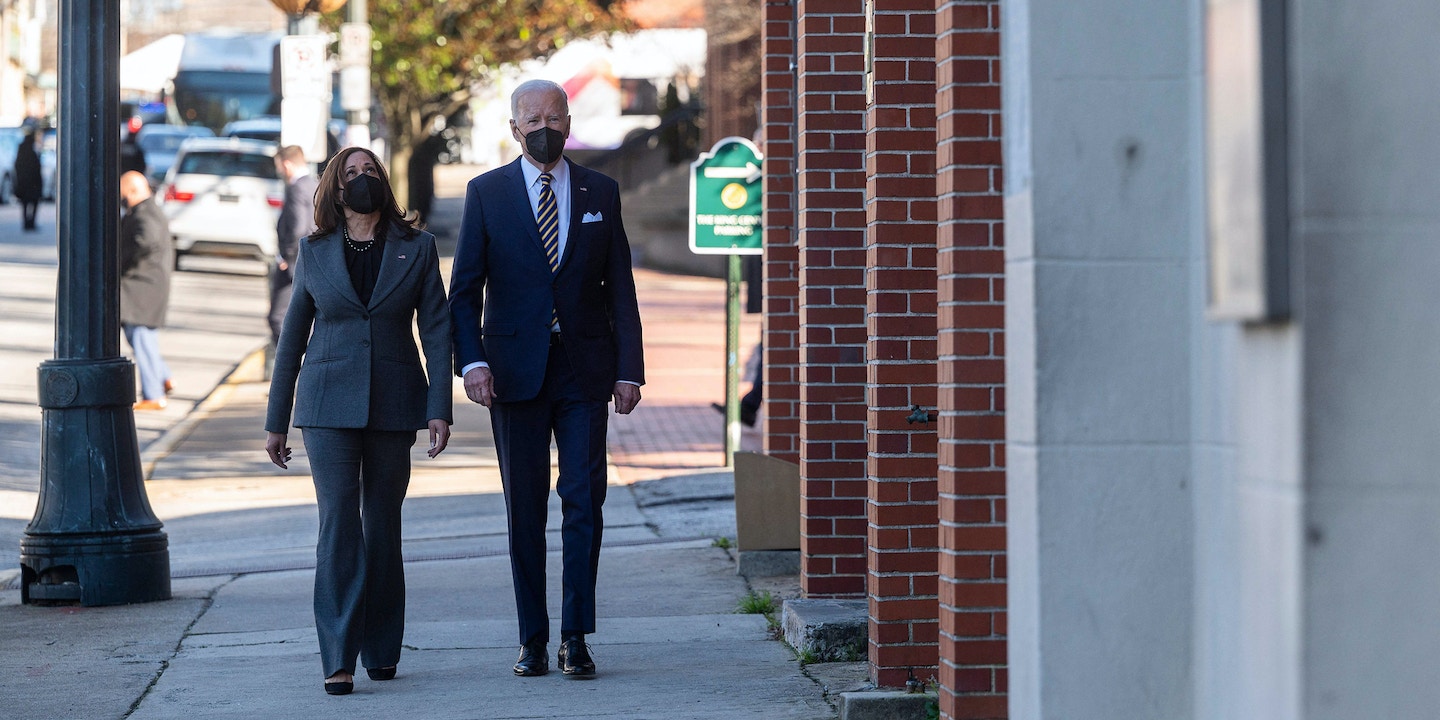 President Joe Biden and Vice President Kamala Harris arrived in Georgia on Tuesday to talk about overcoming a Senate filibuster for voting rights in the middle of a statewide hangover. The University of Georgia’s win over Alabama for the national college football title had half the state looking for an aspirin after parties the prior night. The Georgia General Assembly wisely called off a Tuesday session, likely because leaders knew they wouldn’t have a quorum no matter what happened on the field.

That said, Bulldogs fans weren’t the only ones blowing off the White House visit, during which the president laid a wreath at the tomb of Martin Luther King Jr. and spoke at Morehouse College in Atlanta. A coalition of voting rights activists and civil rights leaders held a press conference Monday to declare that they would not attend the president’s speech, expressing displeasure at the half-measures Biden has taken to pass a voting rights bill.

“Take voting rights seriously,” said James Woodall, former president of the Georgia NAACP. “We’re asking for him to take this seriously and to outline an actual plan. They should be in D.C. taking a vote on this today,” he said. “Also, go Dawgs.”

Stacey Abrams, presumptive Democratic nominee for governor and a national leader on voting rights, also did not attend Biden’s appearance in Georgia, citing a scheduling conflict. She did not elaborate.

Biden used some of the strongest language yet to attack partisan intransigence in the U.S. Senate, likening those who vote to sustain a filibuster against voting rights legislation to secessionists and segregationists.

Biden, for the first time, called on senators to set aside the filibuster in order to pass voting rights legislation in the Freedom to Vote Act and the John Lewis Voting Rights Advancement Act. He had previously avoided language about the filibuster, unwilling to wade into the issue publicly. “I’m tired of being quiet,” he said.

Civil rights leaders have pointed to unprecedented actions taken or threatened by legislators in the wake of Biden’s electoral victory in 2020 and the U.S. Senate wins by Jon Ossoff and Raphael Warnock in January 2021. The Republican-controlled Georgia legislature rewrote the state’s election laws in 2021 to enforce stricter rules for identification in absentee voting and to enable the state elections board to take over local elections boards, among other changes, passing the so-called Election Integrity Act.

S.B. 202 criminalizes “ballot harvesting” activities like pre-filling information on absentee ballot applications. It also requires absentee ballot drop-off boxes to be placed indoors and locked away from the public after business hours, making it much more difficult for people working 9-to-5 jobs to drop a ballot off directly instead of mailing it in.

The law also shortens the window for requesting an absentee ballot, giving voters less time to fill out and mail back a ballot. And the law criminalizes “line warming” activities such as providing food or drinks to people waiting to vote.

About 80 percent of voters cast ballots early in 2020, either by voting at an early-voting station or as an absentee voter. Doing so prevented long lines on Election Day and raised overall turnout.

The federal voting rights bills before the U.S. Senate would create a national baseline for voting access, preempting state laws. All states would have to allow at least two weeks of early voting, with polls open for at least 10 hours a day, including on weekends. Absentee ballots for mail-in voting would be required everywhere, with applications made online and standardized laws for signature matching and identification. Critically, it would prevent partisan election “reviews” like the Arizona audit and prevent election officials from being relieved of duty by partisan politicians.

Gov. Brian Kemp hit back at Biden immediately after the speech at Morehouse. “Ignoring facts and evidence, this administration has lied about Georgia’s Election Integrity Act from the very beginning in an effort to distract from their many failures and rally their base around a federal takeover of elections. But make no mistake, we will not back down,” Kemp tweeted. “The Election Integrity Act makes it easy to vote and hard to cheat with common-sense reforms. But Joe Biden, Kamala Harris, and Stacey Abrams have never let the truth get in the way of forcing their radical agenda on Georgians and Americans.”

After Gwinnett — a suburban Atlanta county and long a Republican stronghold — flipped decisively to Democratic control in 2020, a state senator introduced legislation to radically reshape the county’s Board of Commissioners, expanding the commission to allow Republicans in the northern part of the county to compete again for a seat while weakening the role of the chair and changing school board elections to be nonpartisan races.

The senator, Clint Dixon, backed off the proposal after fierce local criticism, but he remains a co-sponsor of a plan to carve the wealthy and predominantly white Buckhead neighborhood out of the city of Atlanta. The Buckhead de-annexation bill comes over the objection of every legislator representing Buckhead and Atlanta, violating a Georgia rule about local support for local legislation.

Meanwhile, election law changes last year undid bipartisan local elections boards in rural Georgia, ceding political appointments to partisan county commissioners. One case — Lincoln County, north of Augusta — resulted in a new elections board proposing to close six of its seven polling locations. The board’s chair, Lilvender Bolton, said the move was necessary to manage Covid-19 concerns. But the rural county of about 8,000 residents — a third Black, a quarter in poverty — has no public transportation system, and the move would leave most of its voters more than 15 miles from the remaining poll.

Woodall and other local leaders say they are demanding federal action because these moves by Republicans are meant to whittle away at the margins of the vote in a state where the next election is likely to be decided by a percentage point. In the days of Justice Department preclearance, Republicans would not have risked these electoral changes.

“What we need is oversight,” Woodall said. “If we get these legislative proposals through, you will see a strengthening of democracy.”