A terrorist designation for the Houthis could trigger “devastating” sanctions on Yemen. 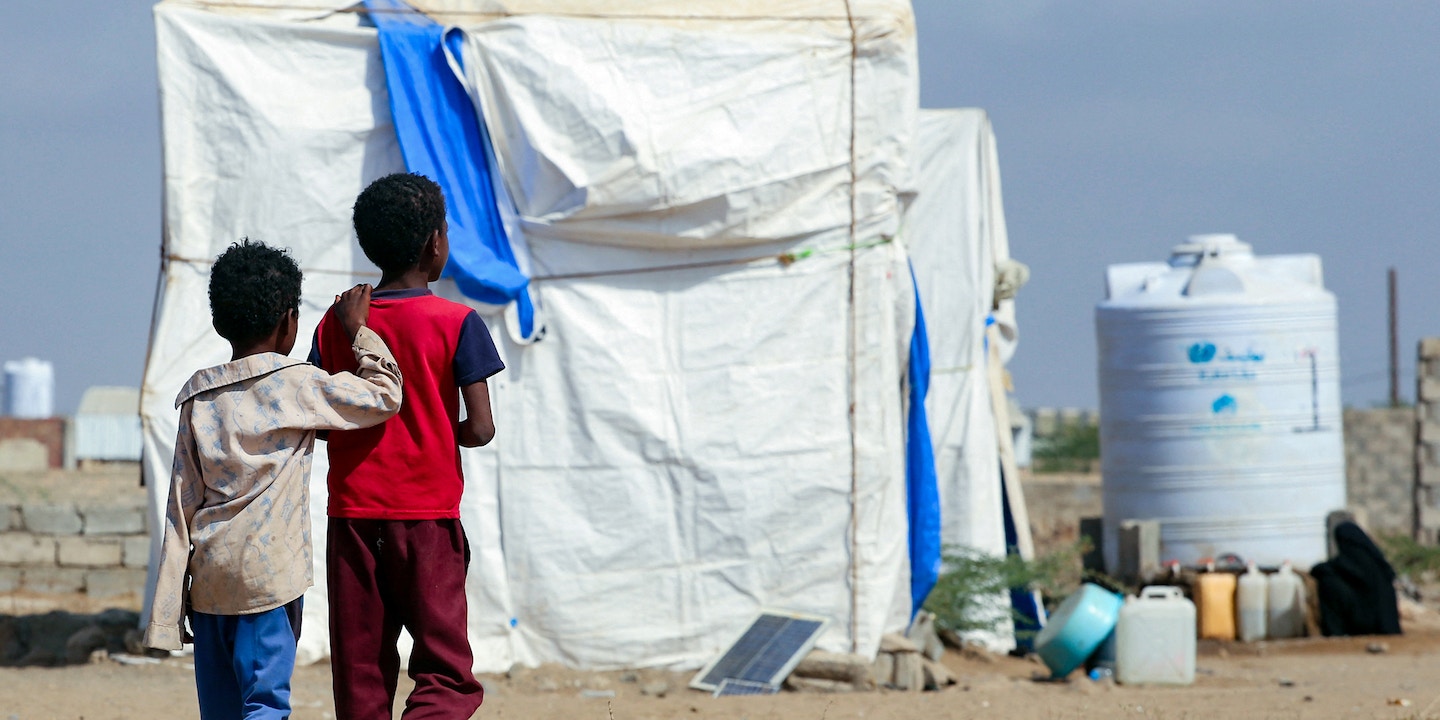 When Joe Biden came into office, one of his first moves was to reject the Trump administration’s last-minute designation of the Houthis as a terrorist organization, after warnings from the United Nations and aid groups that imposing sanctions would exacerbate the famine in war-torn Yemen. “The revocations are intended to ensure that relevant US policies do not impede assistance to those already suffering what has been called the world’s worst humanitarian crisis,” said Secretary of State Antony Blinken in a statement in February 2021.

Now the Biden administration is considering reversing that reversal and redesignating the Houthis as a terrorist group at the request of the oil-rich United Arab Emirates, despite what experts say would be disastrous consequences for Yemeni people. The Houthi rebels who have controlled Yemen’s capital since 2014 recently launched a rare attack on the UAE for its participation in the Saudi-led war in Yemen.

Biden first brought up the possibility of redesignating the Houthis at a press conference on January 19, saying, “We are taking a close look internally within the U.S. government to determine what would best serve our national security interests; what would best serve our desire to be a partner to Saudi Arabia, to the UAE, to other countries that are threatened by these Houthi attacks.”

The White House appears to be seriously considering the change. In late January, Biden’s National Security Council circulated a memo exploring the possibility, according to a U.S. intelligence official and a think tank official familiar with the matter. The memo, a policy options paper produced by the NSC, considers labeling the Houthis as a Foreign Terrorist Organization, Specially Designated Global Terrorists, or a combination of both, the two sources told The Intercept on condition of anonymity to discuss sensitive matters.

High-level administration officials discussed the paper during a Friday, February 4 meeting of the National Security Council Deputies Committee, a senior interagency forum for the consideration of national security policy matters, the sources said. The officials who discussed the paper were split, with representatives from the State Department expressing strong opposition to the designations.

Biden may also face pressure from members of Congress pushing for the terror designation. House Armed Services Committee Members Reps. Seth Moulton, D-Mass., and Mike Waltz, R-Fla., are planning to send a letter to Biden pressing him on the matter, which Politico reported last week.

Experts warn that either designation could usher in punishing sanctions. Both designations would likely make it difficult or impossible for nongovernmental organizations to deliver humanitarian assistance to the country. The major difference between the two categories is that the Treasury Department maintains the Specially Designated Global Terrorists list and seizes the assets of any individuals or groups on it, whereas the State Department controls the Foreign Terrorist Organizations list.

“Designating the Houthis as an FTO could have a devastating impact on efforts to get humanitarian assistance to the Yemeni people which is precisely why the Administration reversed the Trump designation a year ago,” said Bruce Riedel, a senior fellow in the Brookings Institution’s Center for Middle East Policy.

Scott Paul, senior manager of humanitarian policy for Oxfam America, echoed Riedel’s concerns, pointing to the harmful effect that sanctions have had on even humanitarian goods. As a result of Trump administration sanctions, “even imports covered by licenses were severely impacted and vital goods like food and medicine were becoming more scarce,” Paul said.

The Yemen war pits the poorest country in the region against the wealthiest, Saudi Arabia. After Houthi rebels seized control of Yemen’s capital and ousted the Saudi-backed government in 2014, Saudi Arabia intervened, leading an air coalition that sought to bomb the Houthis out of power. The air campaign, nearing its seventh year, comprised over 24,000 air raids that have killed almost 9,000 civilians and wounded an additional 10,000 people, according to the Yemen Data Project, leading to accusations of war crimes. Despite the fierce campaign, the Houthis remain in control of the capital and much of northern Yemen.

The Houthis have embarked on several recent offensives targeting the UAE, opening a new front in the war. “The missile attacks happened because in December to early January, the UAE and Saudi Arabia stepped up their attacks on Yemen,” said Trita Parsi, executive vice president of the Quincy Institute. The UAE, a key member of the Saudi-led military coalition against Yemen, has contributed mercenary fighters as well as fighter jets. The coalition has said that its airstrikes in recent weeks had hit the capital, Sanaa, as well as several other provinces.

“We shouldn’t be taking any side, whether it’s the side of the Houthis or the Saudis,” Parsi said.

The U.S. intelligence official said that the Biden administration policy paper was crafted in response to the Houthi drone attack on Al Dhafra Air Base in Abu Dhabi on January 24. “Obviously, with each attack the impetus [to impose sanctions] rises,” the U.S. think tank official who is familiar with the paper said. Houthi forces launched ballistic missiles at the air base, which were reportedly intercepted. Though there were no casualties, U.S. Central Command noted the presence of U.S. troops on the airbase in a press release. The attack was unusual in its targeting of the UAE, a desert kingdom that until now has enjoyed a relative peace by the standards of the region and has attracted considerable foreign investment. Within hours of the attack, the UAE’s stock markets fell.

In another attack, on January 17, missiles and drones blew up several fuel tankers in Abu Dhabi, killing three people. Yahya Saree, a spokesperson for the Houthis, has said that attacks on the UAE would continue until the UAE ends its involvement in the war in Yemen.

“The Emirates and the Saudis have managed to make this our fight, when it never was [the United States’s] fight in the first place,” Parsi, of Quincy Institute, said. “Bottom line is we shouldn’t be involved in this war, we should only be involved in ending it.”