New research offers an alternative to the war on terror as the Biden administration rethinks its counterterrorism playbook. On September 19, 2001, CIA officers collected cardboard boxes filled with $3 million in nonsequential $100 bills to buy off Afghan warlords, beginning America’s martial response to the 9/11 attacks. A day later, President George W. Bush stood before Congress and declared a “war on terror” that would “not end until every terrorist group of global reach has been found, stopped, and defeated.”

Over the next 20-plus years, the tab on that conflict, which began in Afghanistan but spread across the globe to Burkina Faso, Iraq, Libya, Mali, Niger, Pakistan, Somalia, Syria, Tunisia, and Yemen, has ballooned to more than $6 trillion. The payoff has been dismal: To date, the war has killed around 900,000 people, including more than 350,000 civilians; displaced as many as 60 million; and led to humanitarian catastrophes and the worst U.S. military defeat since the Vietnam War. American cash has built armies that have collapsed or evaporated when challenged; meanwhile, the number of foreign terrorist groups around the world has more than doubled from 32 to 69.

“Counterterrorism strategies which address the root causes of terrorism, rather than the organizations and people that commit it, might end the waves of terrorist violence.”

It didn’t have to be this way, according to a new study of counterterrorism approaches from Brown University’s Costs of War Project. “Terrorism is a political phenomenon,” writes researcher Jennifer Walkup Jayes in “Beyond the War Paradigm: What History Tells Us About How Terror Campaigns End,” which was shared exclusively with The Intercept ahead of its release on Tuesday. “Counterterrorism strategies which address the root causes of terrorism, rather than the organizations and people that commit it, might end the waves of terrorist violence.”

Sophisticated statistical analyses have demonstrated that there are proven, effective methods to hasten the demise of terrorist organizations, according to Walkup Jayes’s report. But the “war paradigm,” which was a departure from America’s previous law enforcement approach to counterterrorism, is not one of them.

One innovative study of 648 militant groups cited by Walkup Jayes notes that only 7 percent of terrorist groups were defeated through military efforts. What bleeding-heart, leftist, ivory tower eggheads came to this conclusion? The 2008 study was conducted by the RAND Corporation, the military’s go-to think tank, when the cost of the war on terror was still a paltry $752 billion.

Today, Al Qaeda is still present in Afghanistan. Its successor, the Islamic State, is active in Afghanistan and Iraq. And neither of those nations is a democracy or economically viable, as Afghanistan now teeters on the brink of economic collapse and is ruled by the very regime that Bush deposed in 2001.

Experts say this cascade of failures could have been largely avoided. “You can envision a scenario, after 9/11, in which the terrorist attacks were treated primarily as a criminal justice problem,” said Stephanie Savell, co-director of the Costs of War Project, noting that the FBI and the CIA could have led the effort with a goal of arresting, prosecuting, and imprisoning Osama bin Laden and others who planned the attacks.

While noting that the Costs of War report highlights drawbacks to this approach, Savell told The Intercept that it would have been transformational. “You wouldn’t have seen 20 years of conflict and this incredible waste of resources,” she said. “The U.S. response wouldn’t have led to this spiral of escalation, of war and violence begetting more war and violence.”

The money spent on the war paradigm could instead have been allocated to more serious national security concerns. Walkup Jayes draws attention to the perils of the global climate crisis, the fact that a lack of health insurance kills more than 45,000 people a year, and the Covid-19 pandemic which has not only led to the deaths of close to 1 million Americans but also laid bare the sorry state of U.S. health care. “The reality is that poverty, racism, and other structural inequalities pose far greater threats to human lives than do terror attacks,” she observes. “These threats are far more dangerous to far more people than are militant groups who use terror tactics, and there are feasible policies to address them.”

It all raises the question of what might have been if the budget for the war on terror had been repurposed. “If the U.S. government had used even a portion of the $8 trillion spent and obligated on the post-9/11 wars on other domestic policies to promote societal health and well-being or mitigate the effects of climate change, that would have resulted in far more meaningful human security in this country,” Savell told The Intercept.

“Beyond the War Paradigm” lays out 10 distinct, though sometimes overlapping, counterterrorism alternatives to America’s militarized approach. These include the law enforcement model, which relies on policing and the judicial system; using public messaging and media campaigns to blunt radical ideologies; addressing the root causes of terrorism by funding development projects and aid groups; and an even more holistic “human security” model, which “aims to empower disenfranchised groups politically and economically … making terrorism a less compelling tactic for changemaking.” 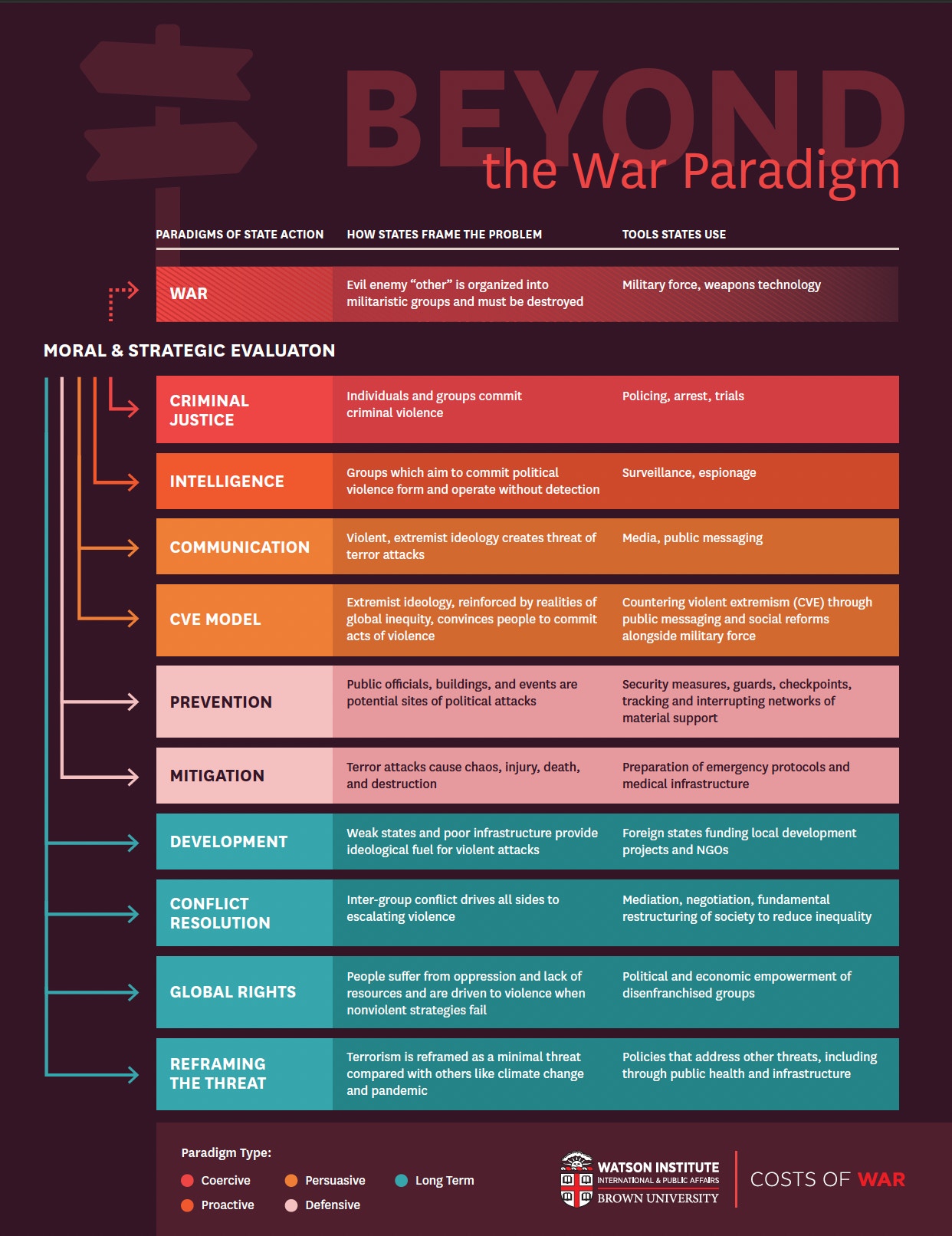 An infographic from “Beyond the War Paradigm,” a new study of counterterrorism approaches from Brown University’s Costs of War Project.

Heather Brandon-Smith, the legislative director for militarism and human rights for the Friends Committee on National Legislation, a Quaker group, says “Beyond the War Paradigm” is crucial to educating members of Congress, many of whom entered government after 9/11, about the alternatives to America’s ineffective but long-standing strategy. “We’ve had 20 years of counterterrorism being seen through the lens of war,” she told The Intercept. “This new report presents different options and demonstrates that long-term, non-military solutions are the most effective. To have the research and evidence laid out in such a clear way is extremely important. It provides the information necessary to have the conversation with Congress and the Biden administration about how to properly resource these non-military tools, which are critical to successful counterterrorism.”

One year ago, the White House imposed temporary limits on drone strikes and commando raids outside of conventional war zones. The administration launched a review of such missions and began writing a new “playbook” to govern counterterrorism operations. That policy, which was reportedly slated to be released around the 20th anniversary of 9/11, has been delayed as the White House has dealt with the fallout of the chaotic withdrawal of U.S. forces from Afghanistan and a final “righteous” drone strike in the country that the Pentagon was forced to admit killed only civilians, most of them children.

The White House would not provide even basic information about the state of the counterterrorism review and when — or whether — the administration might reveal its new policies. “We continuously assess our counterterrorism posture around the world and make adjustments as needed,” a senior administration official told The Intercept.

Recently, Reps. Pramila Jayapal, D-Wash., and Barbara Lee, D-Calif., called for far more than “adjustments.” “The greatest threats to America’s security — pandemics, climate change, economic inequality, authoritarianism — cannot be defeated at the barrel of a gun. It’s time to stop relying on the same old playbook and instead forge a foreign policy that works for everyday people,” they wrote in an article announcing a Congressional resolution they introduced. “Today’s greatest security challenges cannot be solved through military adventurism. International cooperation, diplomacy, development, and peacebuilding — not bombs — must be the foreign-policy tools the country reaches for first.”

Other experts have called for a hybrid policy that maintains existing military capabilities but puts greater emphasis on alternative methods. Luke Hartig, a senior director for counterterrorism at the National Security Council in the Obama White House and now a fellow in New America’s International Security program, called for an “all tools approach to counterterrorism” that combines law enforcement, border security, intelligence, the targeting of terrorist financing, foreign partnerships, and countering extremist ideologies, as well as military operations.

“We have over-resourced our military responses and under-resourced our civilian programs,” he told The Intercept. “I don’t think ending the forever war means ending all military operations against terrorist groups, but it does mean shifting to a civilian-led paradigm. That means investing more in things like countering violent extremism and institution building. It means deploying savvy diplomacy to advance counterterrorism objectives. And it means being willing to rely on our defenses to protect the country rather than lethally targeting every threat we see in the world.”

“Beyond the War Paradigm” is packed with intriguing findings from studies of militancy, such as the link between an imbalanced sex ratio among young adults and terrorism and the fact that education in the humanities “may offer inoculation against violent ideologies, particularly those which target others on the grounds of ethnicity or religion,” as well as suggestions about how such research might be employed to achieve real-world counterterrorism results. Altogether, it reinforces a seemingly self-evident finding from the World Bank’s 2011 World Development report, highlighted by Walkup Jayes, that nonetheless appears to have escaped four presidential administrations and hundreds of lawmakers over more than 20 years: State violence in the form of invasion, occupation, and repression is central to the rationale of terrorist groups.

“We would be in a very different place if we had prosecuted the 9/11 attacks as criminal acts and called it a day,” Walkup Jayes told The Intercept. “The war paradigm has caused more people to take up arms against the United States and broadened support for the terrorist groups that the war aimed to eliminate. So if your goal is to truly prevent terrorism, your best bet is to help foster security and human rights, and guarantee people have access to the resources that they need.”