After making the initially brave decision last summer to withdraw U.S. forces from Afghanistan, the Biden administration announced on Friday that it intends to split the Afghan central bank’s assets — which are held in the possession of the New York Federal Reserve Bank — between the families of 9/11 victims and unspecified efforts “for the benefit of the Afghan people.” The decision puts Biden on track to cause more death and destruction in Afghanistan than was caused by the 20 years of war that he ended.

For months, the administration has been debating how the future of economic relations with a Taliban-controlled Afghanistan will look. The assets, which were initially frozen when the Taliban seized control of the country in August, are essential for the liquidity and basic functionality of the economy. With the administration’s lack of firm commitment to return the assets to the central bank — which American economists who helped design, and still help to run, say is still independent from the Taliban — the Afghan people will be reliant on humanitarian aid for the foreseeable future. Already, reports say that aid is not enough to prevent the precipitous decline in living conditions the Afghan people are facing.

The problem is one of basic economics: Seizing the central bank funds has brought economic activity to a standstill. People have lost access to money held in banks. Government workers and teachers are going without paychecks. Importers have no access to capital to front the imports. Exporters similarly can’t access capital to keep their businesses operating. The currency, the afghani, has collapsed in value, and inflation is much steeper in Afghanistan than the rest of the world as a result.

“All of the foreign exchange reserves that are in the U.S. and Europe belong to the Afghan people,” said Shah Mehrabi, an economics professor at Montgomery College who serves on the central bank’s supreme council. “The decision to release only part of the funds will continue to hurt the millions of Afghan children, women, and families who are suffering one of the worst humanitarian and economic crises around the world.” Mehrabi said that despite press reports that the central bank money would be sent to humanitarian aid groups, he was hopeful it would be released to the bank, which still includes two American board members.

A White House spokesperson said the administration would create a trust fund to benefit the Afghan people in a variety of ways.

In the last few months, as House Democrats squabbled over the wording of letters and senators balked at questions about America’s responsibility for the crisis, the situation on the ground in Afghanistan has rapidly devolved. Multiple international organizations have warned that these conditions have pushed nearly 10 million Afghans to the brink of starvation. To survive, people are burning their furniture and other possessions to stay warm, or selling them for food. While those 20 years of war, an irregularly long drought, and an especially severe winter have set the stage for the crisis, the proximate cause of the Afghan people’s suffering is the seizure of Afghan assets, coupled with sanctions imposed by the United States government.

While the Biden administration has offered $308 million in humanitarian assistance and implemented policies to streamline the delivery of that assistance, this seizure of billions of dollars in assets rightfully owned by the Afghan people — who are readjusting to life under the harsh rule of the Taliban — has left them with no avenue toward building a sustainable economy capable of importing the food and fuel necessary for survival in the country’s inhospitable landscape. 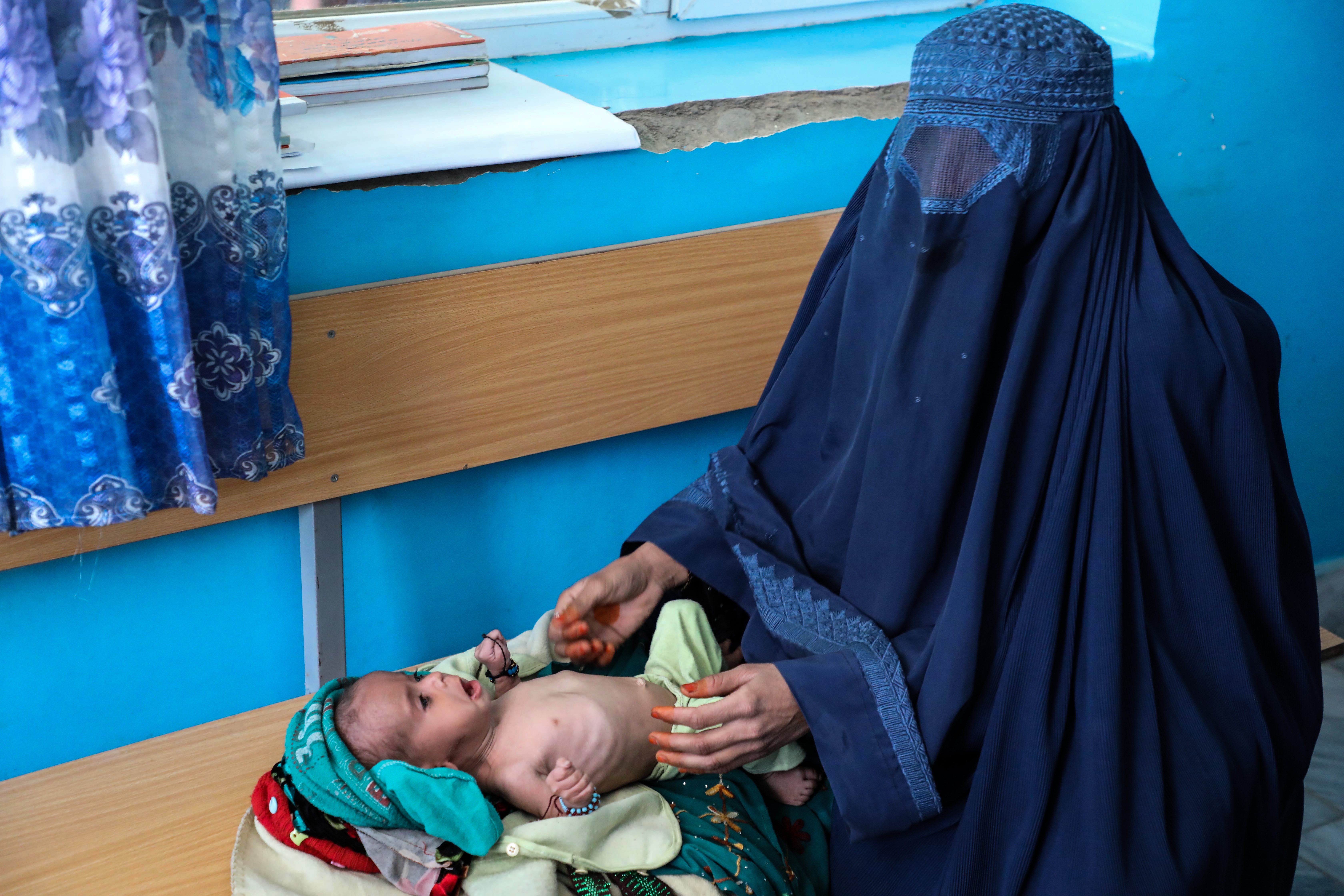 An Afghan infant, suffering from malnutrition, is seen at a hospital in Kabul, Afghanistan, on Jan. 16, 2022.

Members of Congress have been slow in coming to grips with the effects of the Biden administration’s policy in the region. In December, Reps. Pramila Jayapal, D-Wash.; Chuy García, D-Ill.; and Sara Jacobs, D-Calif., led over 40 of their colleagues in a letter to the administration that stressed the need for “conscientiously but urgently modifying current U.S. policy regarding the freeze of Afghanistan’s foreign reserves and ongoing sanctions.”

Last week, Jayapal, the leader of the Congressional Progressive Caucus, sponsored an amendment to the America COMPETES Act on the sanctions. While it did not call for an end to the U.S. sanctions regime, it would have set up the groundwork for Congress to formally study the disastrous effects of our economic policies. While House Democrats could have muscled the amendment through with their own votes, 44 of them joined every House Republican to block its passage. The Intercept contacted each of those 44 Democrats, and not one of them would provide an on-record explanation for why they opposed studying the devastation Afghans are facing as a result of U.S. policies.

With the amendment’s failure, legislative action to address the crisis appears stalled for the time being, though Jayapal expressed optimism that the vote could be a precursor to an easing of U.S. restrictions. In an interview with The Intercept on Wednesday, she said the caucus felt it was a victory to win the vast majority of Democrats in a vote that “for the first time, really took on the humanitarian effects of these sanctions.” Her office did not immediately respond to a request for comment on the Biden administration’s announcement.

A senior Democratic foreign policy aide, who was granted anonymity to openly share his thoughts on the Biden administration’s actions, said the policy “effectively amounts to mass murder.” According to the aide, Biden “has had warnings from the UN Secretary General, the International Rescue Committee, and the Red Cross, with a unanimous consensus that the liquidity of the central bank is of paramount importance, and no amount of aid can compensate for the destruction of Afghanistan’s financial system and the whole macro economy.”

Mark Weisbrot, co-director of the Center for Economic and Policy Research, agreed with the characterizations of Biden’s decision as mass starvation. Most people “don’t understand the economics,” of Biden’s devastating decision, he told The Intercept. “If a country doesn’t have reserves, and it doesn’t have a functioning central bank, then there’s no amount of aid that’s going to come anywhere close to making up for that.”

This week, after months of insistence from human rights activists and international nongovernmental organizations, Congress finally began to debate the United States’s role in the rapidly escalating humanitarian crisis in Afghanistan. On Wednesday, in a long overdue hearing in the Senate Foreign Affairs subcommittee that governs the Middle East, Subcommittee Chair Chris Murphy, D-Conn., acknowledged that humanitarian aid alone would not be enough to prevent the rapidly approaching death of thousands of Afghans.

Murphy did not directly call for a shift in U.S. policy during the hearing, but he said in an interview with The Intercept that the administration will need to ease sanctions and unfreeze some Afghan assets to mitigate the crisis. “I believe that it’s time for us to release the money,” he said, though he reiterated concerns over whether the Afghan central bank can remain truly independent for long under Taliban rule.

The only other senator to publicly call for these actions is Sen. Bernie Sanders, I-Vt., who tweeted his position on the matter last month. Neither senators’ office responded immediately to a request for comment on Biden’s decision.

Afghanistan is facing a humanitarian catastrophe. I urge the Biden administration to immediately release billions in frozen Afghan government funds to help avert this crisis, and prevent the death of millions of people.

Other senators have mostly dismissed questions about America’s complicity in a potential Afghan genocide. In interviews with The Intercept over the last week, several typically outspoken liberal senators have demurred or rejected the premise of questions about our sanctions regime. Sen. Tammy Duckworth, D-Ill., a veteran of America’s war in Iraq, denied hearing about the many reports indicating that humanitarian assistance alone will prove insufficient in aiding Afghans. Sen. Tammy Baldwin, D-Wis., pointed to the Taliban’s prior refusal to allow women and girls to attend school and work to justify Biden’s policies, but said she would further study reports confirming that, since assuming power in August, the Taliban has continued to allow women to maintain a role in public life.

Sen. Rand Paul, R-Ky. — a steadfast opponent of sanctions who gave a fiery speech opposing Sen. Ted Cruz’s proposal to sanction Russia a few weeks ago — equivocated on the plight of the Afghan people, telling The Intercept that the Biden administration’s withdrawal prompted the crisis, and that he does not support easing sanctions or releasing frozen assets at this time. And vocal progressive Sen. Mazie Hirono, D-Hawaii, responded to a question about the devastation wrought by sanctions and frozen assets with a question of her own: “We’re still talking about Afghanistan?” 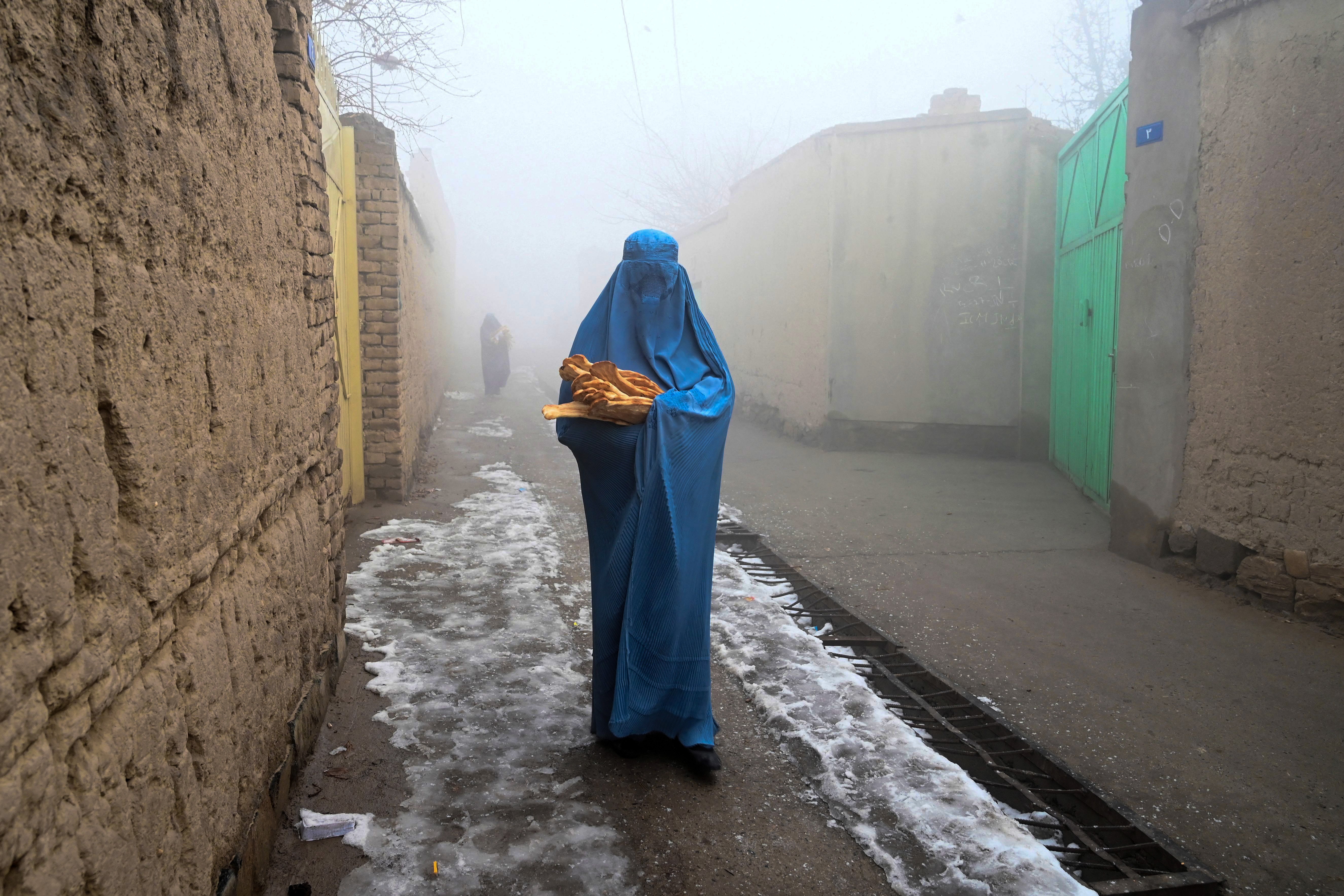 A woman walks along a road toward her home after receiving free bread from the Save Afghans From Hunger campaign in Kabul, Afghanistan, on Jan. 18, 2022.

In the subcommittee hearing this week, International Rescue Committee President and CEO David Miliband and International Crisis Group consultant Graeme Smith both gave full-throated condemnations of the international community’s financial policies in Afghanistan. Together, the two dispelled the arguments that humanitarian aid could compensate for normalizing economic relations with Afghanistan and rebutted those who point to the cruelties of the Taliban to justify the cruelties inflicted by the West.

Their testimony stood in stark contrast to the equivocation by the senators who attended. Democratic Massachusetts Sen. Ed Markey focused on the discriminatory policies of the Taliban rather than the destruction Western democracies have inflicted on the Afghan people. (Markey declined to respond to multiple requests from The Intercept to clarify his position.) New Jersey Democratic Sens. Cory Booker and Bob Menendez did not attend. Sen. Chris Van Hollen, D-Md., limited his interactions to basic informational questions. Ranking member Sen. Todd Young, R-Ind., the only Republican member to attend, acknowledged that the U.S. has to “identify a path forward for engaging an Afghanistan ruled by the Taliban.” But he declined to explicitly open the door to normalizing economic relations and unfreezing Afghan assets.

In a particularly revealing exchange, Sen. Jeanne Shaheen, D-N.H., pointed to the Taliban’s historic marginalization of women to justify maintaining America’s destructive economic policies. Miliband replied that the Taliban is making considerable concessions on gender equality and is currently allowing Afghan women — whose salaries remain unpaid amid the ongoing asset freeze — to work and attend school.

Miliband then presented what he described as the prevailing question among Afghan women in his organization: “How on earth does the West think they are helping our prospects when we can’t feed our families?”

Correction: February 11, 2022, 6:54 p.m. ET
This story previously stated that the Biden administration would direct half of frozen Afghan foreign reserves to humanitarian groups. Though news outlets have reported the funds would be diverted to aid groups, the executive order does not specify how the money will be released, and it remains unclear.

A previous version of the video misidentified a member of Congress as Chrissy Houlahan.