Democrats Have a Bill to Expand Social Security. Here’s What It Would Mean for You.

Americans love the idea of increasing Social Security benefits. Now is the time to educate ourselves about how that could happen. 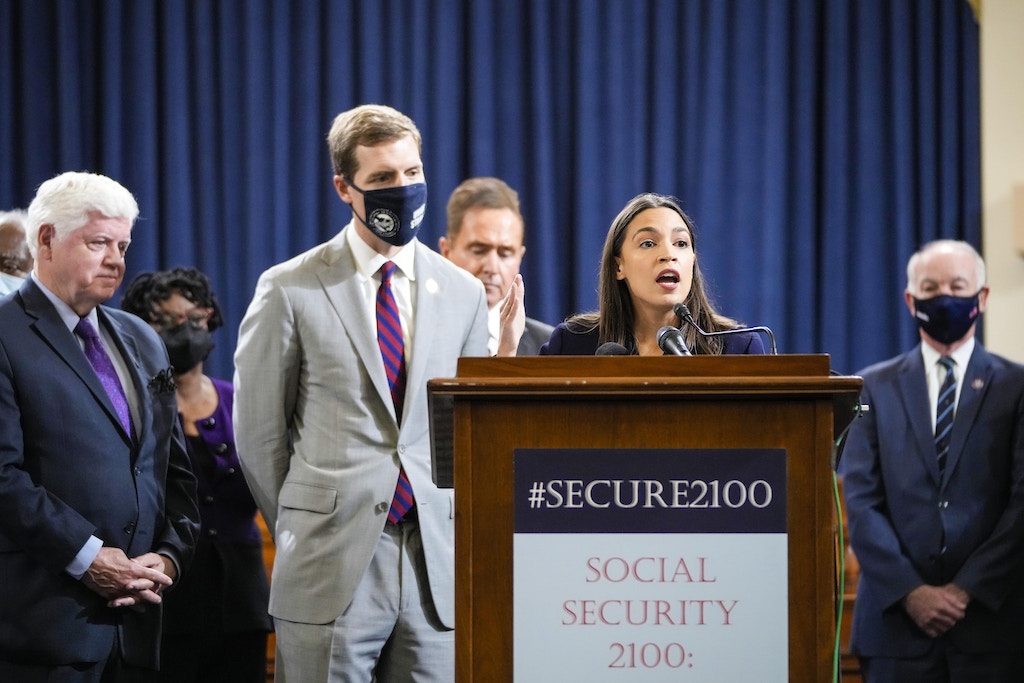 Democratic Rep. John Larson of Connecticut has written a bill titled “Social Security 2100: A Sacred Trust” that would immediately expand the program’s benefits for all 65 million recipients. It has at least 200 co-sponsors, all Democrats, in the House. And increasing Social Security payments should be an easy lift for Democrats, especially in an election year.

Yet the bill still awaits a vote in the Subcommittee on Social Security — chaired by Larson — of the House Ways and Means Committee, much less a vote on the floor. Why?

Part of the answer appears to be Wendell Primus, a senior aide to Speaker of the House Nancy Pelosi, D-Calif. Primus is seen by many in the world of Washington, D.C., progressive politics as embodying a mindset from the Democratic Party’s past, when all that seemed possible was preventing cuts to important social programs, rather than going on offense.

Primus “passionately cares about children, he’s always made the point that we have to make sure that we’re taking care of the children,” Larson said in a recent appearance on The Intercept’s podcast Deconstructed. “Wendell’s concern would be that there’s only so much money to go around. We have only so many expenditures.” Pelosi’s office did not immediately respond to a request for comment.

But, Larson explained, “My argument is that this does take care of the children. [Social Security] is the No. 1 anti-poverty program for children.” While Social Security is best known for its benefits for retirees, it also provides support to children with a parent who has died or become disabled and children who are themselves disabled. Larson is optimistic that his bill will receive a vote before long and in fact believes it would be so politically popular that it could pass with some GOP support.

According to Larson, Mark Meadows, former chair of the House Freedom Caucus and later chief of staff for former President Donald Trump, once told him that if his legislation “makes it to the floor, you’re going to find a lot of Republicans are going to be voting for [it].”

Social Security 2100 would then face a tougher challenge in the Senate. According to Senate rules, changes cannot be made to Social Security via the reconciliation process, which requires a simple majority. It would therefore need to attract the votes of all 50 Democratic senators as well as 10 Republicans to end a certain filibuster.

Another tricky aspect of the bill is that all of its expanded benefits are temporary, set to last only for five years. A previous version of Larson’s bill made the increased benefits permanent, paying for them by gradually raising the rate of payroll taxes and eliminating the limit on wages, currently $147,000, on which the taxes are assessed. The new bill would generate much less revenue, because it is written to honor President Joe Biden’s pledge not to increase taxes on anyone making less than $400,000 per year.

Larson and other supporters of this version of the bill believe that it would be politically difficult for members of Congress to allow the new benefits to expire and the issue could then be revisited.

In addition to the co-sponsors of Larson’s bill, it has also been endorsed by many outside organizations, including the NAACP, the National Organization for Women, and MoveOn. Yet there’s been limited political education on the bill’s specific new benefits, so regular citizens may want to educate themselves. These are the main provisions of Social Security 2100:

Benefits for each recipient of Social Security would go up right away by $30 per month — meaning $360 per year for individuals or $720 for retired couples. This is especially important because, while it may be revisited, Medicare is hiking premiums for Part B by an unusually large amount for 2022, adding $260 to annual expenses for the majority of retirees receiving Social Security.

This extra $360 would go to all Social Security beneficiaries. While Social Security is best known for supporting older people, the program’s official name is Old-Age, Survivors, and Disability Insurance, or OASDI. About 15 million beneficiaries are disabled or survivors of workers who’ve died.

This is not an increase in benefits simply for the sake of it. Rather, it’s designed to address Social Security’s inaccurately low cost-of-living increases for decades.

Since 1975, Social Security benefits have automatically been increased every year via a cost-of-living adjustment, commonly known as COLA, to prevent them from decreasing in real terms due to inflation. However, the Labor Department sets the cost-of-living adjustment using a measurement called CPI-W, which is designed to capture the inflation experienced by the urban working-age population.

More recently, the Labor Department began trying to measure inflation as experienced by older people with something called CPI-E. The CPI-E has on average been about 0.2 percent higher per year than the CPI-W.

Someone who’s 62 who’s worked full-time for 30 years making $15,080 a year (the current federal minimum wage) and claims her Social Security benefit at age 66 would receive about $11,200 per year under the regular formula. Under the bill’s new special minimum benefit she would get about $15,900, or 42% more.

When one member of a couple who both worked dies, Social Security benefits can fall precipitously for the survivor, sometimes by as much as half. Social Security 2100 would change the rules so that surviving spouses would continue to get at least 75 percent of the combined benefits received by them and their late partner. This would be especially important for women, who tend to outlive men.

Currently, Social Security benefits for retirees are calculated based on their income from whatever jobs they held while working. This penalizes those who have to spend unpaid time taking care of children or other dependents. Social Security 2100 would change this by recognizing that caregiving is obviously work and providing those who do it with credits as though they’d been in the formal workforce.

People who don’t pay close attention to Social Security are often stunned to learn the taxes that pay for it are only levied up to a certain threshold of income. As mentioned above, that limit for 2022 is $147,000. Anyone making over $147,000 this year will pay no OASDI taxes on income over that threshold. Social Security 2100 would leave the $147,000 threshold in place — until a worker’s income reached $400,000. All salary after that would start being subject to OASDI taxes again.

Social Security 2100 would also make many smaller changes and technical fixes to the program that would greatly improve it. Those who have become severely disabled would be immediately eligible for benefits rather than being forced to wait five months. Partially disabled people would merely have benefits gradually reduced if they’re able to work and earn above a threshold level, rather than their benefits being immediately eliminated. The Social Security Administration would mail yearly statements to people throughout their lives so that they can see their projected benefits. And that’s not all.

For all of these reasons, passing Larson’s bill — or just forcing Republicans to defeat it — should be a potent issue for Democrats going into the midterms, especially in an atmosphere in which the party badly needs to demonstrate results.