Don’t Be a Tankie: How the Left Should Respond to Russia’s Invasion of Ukraine

Those who don’t stand in solidarity with the oppressed cannot call themselves leftists. 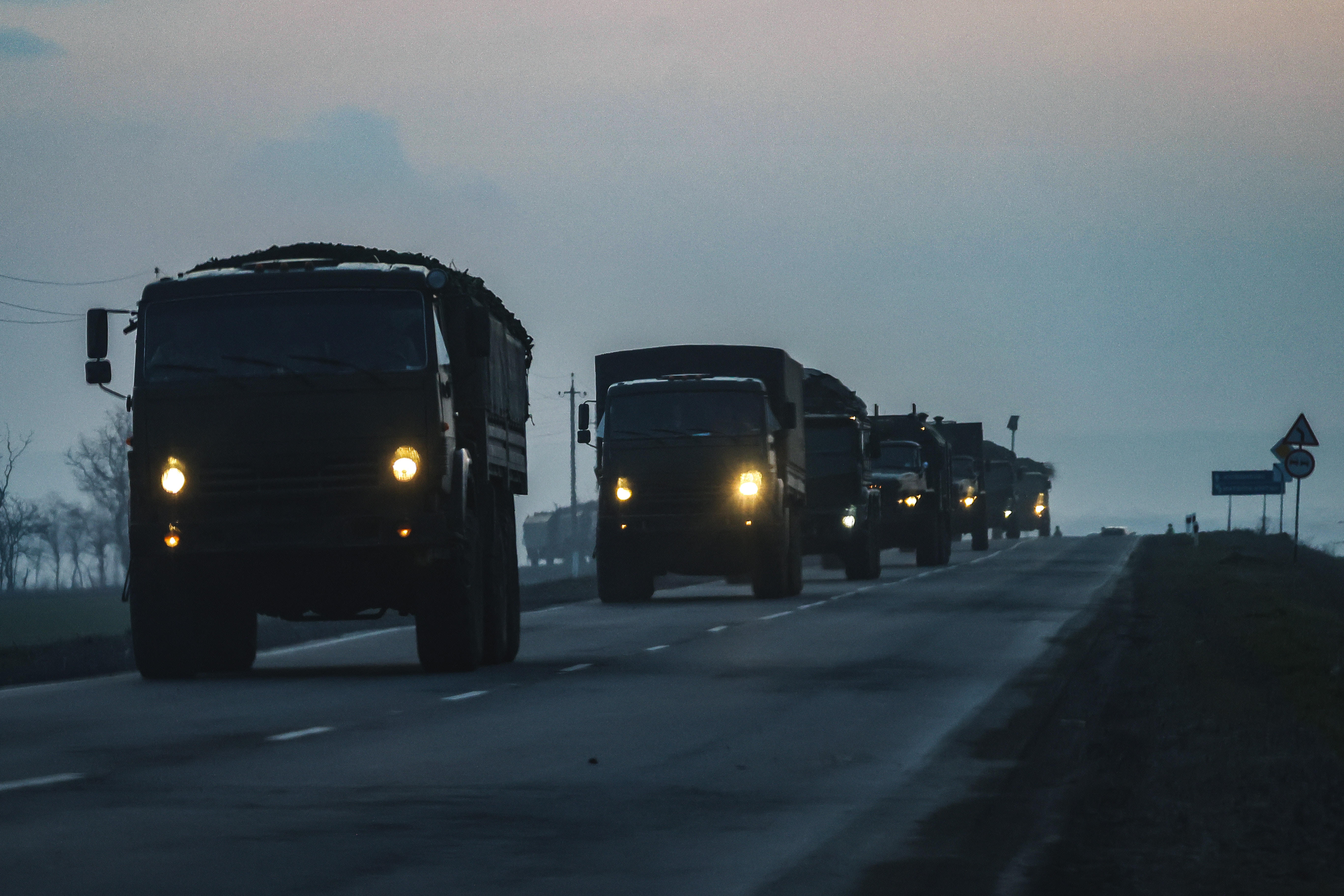 A convoy of Russian military vehicles drives through Rostov, Russia, toward eastern Ukraine on Feb. 23, 2022.

With Russia’s massive invasion of Ukraine from three directions, Russian President Vladimir Putin seems determined to overthrow Ukraine’s government and install a puppet regime. If he persists in this mad act of imperial aggression, it will be catastrophic not only for Ukraine but for Russia and all of Europe — and maybe even the entire world. With his forces encircling Kyiv but bogged down after five days of heavy combat, Putin placed Russia’s nuclear forces on alert.

If you opposed the criminal U.S. attack on Iraq in 2003, then you must oppose this criminal attack on Ukraine.

If you identify as a leftist, wherever you live and whatever your nationality, your duty now is to stand by the people of Ukraine as they resist Russian state terrorism — and to stand by those thousands of Russian citizens courageously protesting the war in dozens of cities across their country. If you opposed the criminal U.S. attack on Iraq in 2003, then you must oppose this criminal attack on Ukraine. Not just consistency, but a minimal degree of decency and human solidarity requires it. Putin’s war is a blatant violation of international law against an independent country that posed no threat to Russia.

Solidarity with the oppressed — regardless of race, religion, nationality, gender, and so on — must be the driving force of leftist politics if they are to have any ethical value. Unfortunately, a small but loud faction that claims to be on the left and to be anti-imperialist has for years backed deeply oppressive dictatorships around the world, from Syria’s Bashar al-Assad, who declared war against his own people, to the Chinese government, which has forcibly detained up to a million Turkic Muslims in internment camps, to Nicaragua’s Daniel Ortega, who abandoned the left many years ago and now rules over his country as a right-wing dictator.

These pseudo-leftists — sometimes called “tankies,” a name deriving from an earlier generation of Western leftists who backed the Soviet invasion of Hungary in 1956 — also defend Russia’s behavior today. Other commentators like Gilbert Achcar and Dan La Botz have explained this crowd’s origins in detail, but the key element in the tankie mindset is the simple-minded assumption that only the U.S. can be imperialist, and thus any country that opposes the U.S. must be supported. As author and human rights activist Leila Al-Shami put it several years ago, “The pro-fascist left seems blind to any form of imperialism that is non-western in origin. It combines identity politics with egoism. Everything that happens is viewed through the prism of what it means for westerners — only white men have the power to make history.”

In the present context, the tankies either directly defend, or make excuses for, Putin and Russia, even though the government is phenomenally corrupt, a crony capitalist regime led by a thug who assassinates his political opponents. The tankies tend to be correctly critical and probing about U.S. empire but don’t apply these critical faculties to Russia. They become gullible and naïve when dealing with Russian officials and their narrative. It would be tempting simply to ignore the tankies, but we must repudiate them. If we don’t, they will continue to give the left a bad name, especially among people fighting repressive regimes, who often assume tankies speak for the rest of us and thus feel betrayed by Western leftists.

What the tankies fail to acknowledge is that Putin’s regime is as deeply reactionary socially as it is repressive politically. That’s why right-wing extremists in western Europe and the U.S., including Tucker Carlson and Steve Bannon, have applauded him, and why neo-Nazis have celebrated him as the savior of the white race. In supporting Putin, the tankies are in league with the far right.

Like American leaders when they engage in imperial ventures, Putin does not see his invasion as an illegal war. In a long, potted essay last summer, he argued that the two countries are “one people, a single whole” and criticized Lenin’s establishment of the Soviet Union as a federation of equal republics with each having the right of secession. Russia, Putin claimed, “was robbed” by the Bolsheviks. He wrote that the “true sovereignty of Ukraine is possible only in partnership with Russia.” The message could not have been clearer: Ukraine has no right to genuine independence; it belongs to Russia. This policy toward Ukraine is more reminiscent of 19th-century Great Russian chauvinism than anything else.

Putin heightened the rhetoric to fever pitch after ordering Russia’s “special military operation.” He absurdly accused Ukraine of committing “genocide” in regions of eastern Ukraine where the Russian language dominates and separatists have a foothold. Putin called Ukraine’s government a “junta” led by a “gang of drug addicts and neo-Nazis,” and he declared that the goal of the invasion was to “demilitarize and denazify Ukraine.” Ukraine led by Nazis? The president, Volodymyr Zelensky, who was elected in 2019 by a landslide, is a Jew whose relatives were murdered in the Holocaust. Though there are fascist militias in Ukraine, just as there are in the U.S. and other Western countries, Ukrainians have repeatedly and decisively rejected neo-Nazis and right-wing extremists at the polls.

Responsibility for this war rests with Russia and Russia alone. But that should not obscure the fact that NATO, led by Washington, laid the groundwork for confrontation with a series of missteps after the breakup of the Soviet Union, provocations that fueled Russian resentment and fears of Western encirclement. First came the ill-advised expansion of NATO in the late 1990s, which was criticized not only by the left, but by a long and impressive list of former establishment cold warriors, including George Kennan, Richard Pipes, Sam Nunn, and many more. Western leaders had an opportunity to reorder the European security architecture in a way that included Russia at the highest levels after the fall of the Soviet Union. Instead, led by President Bill Clinton, they committed to the eastward expansion of NATO, an organization built on the premise of confrontation with Russia.

Even more misguided was the Western vow in 2008 to include Ukraine and Georgia in NATO. As Anatol Lieven, a Russia specialist at the Quincy Institute, put it in a recent interview: “We never had the slightest intention of defending Ukraine, not the slightest.” NATO’s declaration, he said, was “deeply immoral” for its hollowness. President Joe Biden’s current CIA Director William Burns, a veteran Russia expert formerly at the State Department, has long argued against both of those provocations, most recently in a memoir published just a few years ago. Even New York Times columnist Thomas Friedman, that popinjay of pompous platitudes and parrot of establishment opinion, noted that, in this unfolding disaster, “America and NATO are not just innocent bystanders.”

Solidarity with Ukrainians under Russian siege is just as vital as solidarity with Palestinians suffering under Israeli apartheid.

What now? We must demand a full and unconditional withdrawal of Russian forces from Ukraine, and we must insist that the United States and NATO keep to their repeated public vows not to get directly involved militarily. Some of the sanctions may do more harm to the Russian people than to their government; the freezing of the government’s foreign bank reserves could bring the entire Russian economy to its knees. But freezing the money secretly stashed overseas by wealthy Russians — which some economists estimate could amount to as much as 85 percent of the country’s GDP — would be a good way to narrowly target Putin and the oligarchs surrounding him.

For the left, solidarity with Ukrainians under Russian siege is just as vital as solidarity with Palestinians suffering under Israeli apartheid, Yemenis being bombed by U.S. ally Saudi Arabia, or any other people fighting oppressive regimes. As Martin Luther King Jr. said, injustice anywhere is a threat to justice everywhere.