While the U.S. president refuses to condition military aid, Israel has toppled more than twice as many Palestinian structures in the West Bank than it had by this point in Trump’s term. 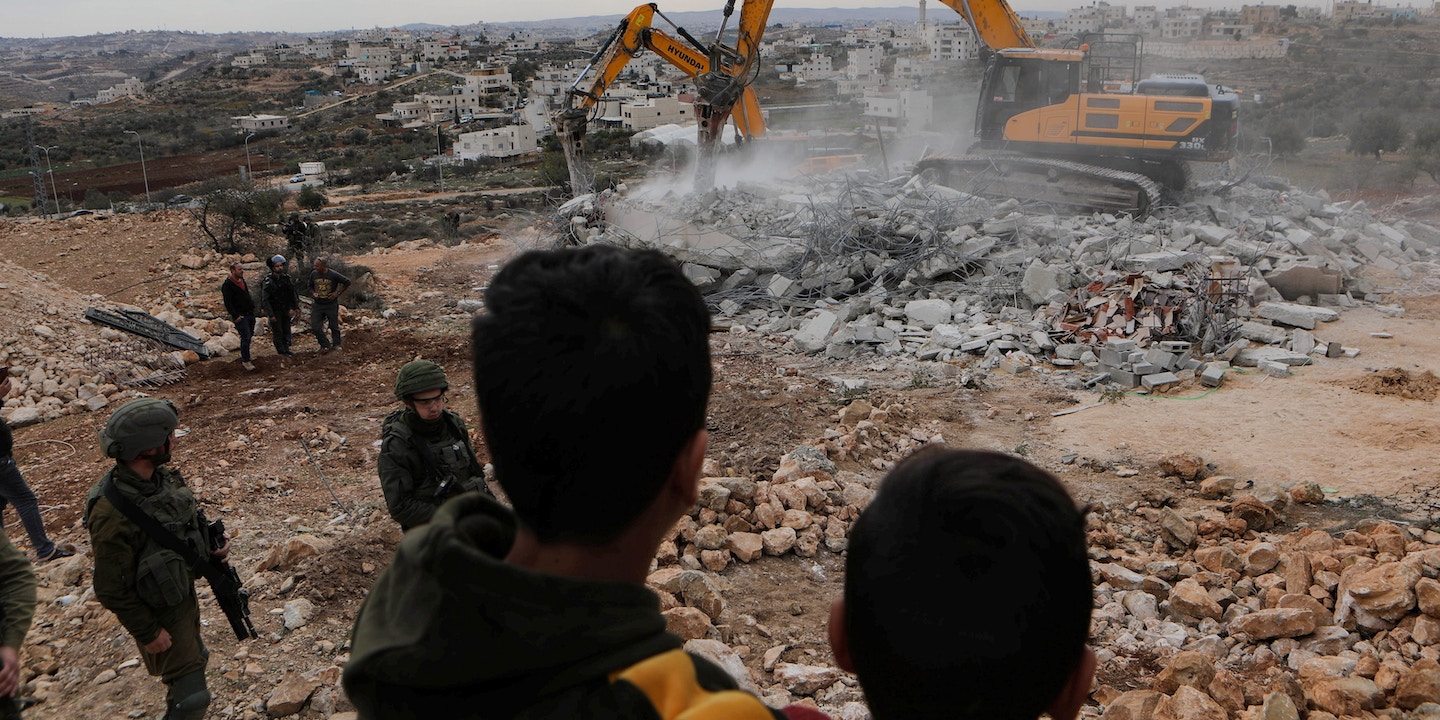 The rate of Israel’s destruction of Palestinian-owned properties in the occupied West Bank is accelerating at a rapid pace under U.S. President Joe Biden and Israeli Prime Minister Naftali Bennett, according to data from the United Nations’s Office for the Coordination of Humanitarian Affairs. This week, the U.N.’s tally of demolitions carried out since Biden’s inauguration eclipsed 1,000.

“The future lies in the Palestinians being cordoned off into these tiny little ghettos.”

In the 13 months since Biden took office, over 1,300 Palestinians, a majority of whom are children, have been displaced by the demolitions tallied by the U.N., which counts each permanent closure or destruction of a residential or commercial property or key piece of infrastructure. At a similar point in President Donald Trump’s tenure, under former Israeli Prime Minister Benjamin Netanyahu, Israeli officials had carried out the demolition of 379 structures that displaced nearly 600 Palestinians — less than half the toll overseen by Biden and Bennett so far.

According to Diana Buttu, a Palestinian Canadian lawyer and scholar at the Institute for Middle East Understanding, Bennett is ramping up these demolitions as a display of strength in hopes of stamping out any remaining hope that Palestinians might one day achieve self-determination. “Bennett’s making it clear that this is where the future [of the Israeli-Palestinian relationship] lies,” she told The Intercept. “The future lies in the Palestinians being cordoned off into these tiny little ghettos. And all the land surrounding these ghettos will slowly be taken — be stolen — for Israeli settlements.”

Experts say the accelerating pace of Israel’s demolitions is a direct result of Biden’s refusal to pressure Bennett over Palestinian rights. The United States has considerable leverage over Israel, they point out, and Biden could wield it to end Israel’s aggressive expansionism — potentially within the course of a single conversation.

“I don’t think it takes more than for him to pick up the phone and actually threaten [Bennett],” Buttu said. But the well-being of Palestinians has clearly been “put on the back burner” in favor of Biden’s desire to secure a new Iran nuclear deal and to project the sense that tensions in the region have calmed since the violence of last summer, when Israeli attacks killed nearly 200 Palestinian civilians. Buttu and other Palestinian rights activists say Biden’s reluctance to push Bennett undermines his purported support for a two-state solution and amounts to tacit acceptance of Israel’s ongoing ethnic cleansing of Palestinians. In the 2021 calendar year, Israeli-enforced demolitions of Palestinian-owned structures surged to 907 — the second-highest level on record, surpassed only by the 1,094 demolitions that were carried out under President Barack Obama in 2016 while Americans were distracted by an acrimonious presidential election. Over 145 demolitions have already occurred in 2022, putting Biden and Bennett on track for another record. And experts say these figures are likely an undercount, given that some events take time to be reported or are never reported at all.

The increase joins the resurgence of brazen assassinations in marking a rapid escalation in Israeli expansionism and ethnic cleansing in the occupied West Bank, and they both add texture to the ongoing backlash to decisions by leading international human rights organizations to explicitly label Israel’s ongoing subjugation of Palestinians as apartheid. While proponents of Palestinian rights have been using the term to describe Israeli oppression for decades, its adoption last year by two influential international organizations — Human Rights Watch and Amnesty International — has renewed attention on the atrocities committed by the regime.

Israeli authorities often use discriminatory local permitting rules to justify the demolitions of Palestinian structures. Among other inequities, these rules foreclose thousands of buildings erected by Palestinians who were unable to acquire a permit from ever securing proper licensing, with few exceptions. Meanwhile, Israeli structures regularly receive retroactive permits. The disparate application of permit laws has long been a key tool of the Israeli government in the enforcement of its multi-tiered system of political rights, as Amnesty International’s recent report recounts at length.

While the Biden administration made public calls for the demolitions to cease in the last year, activists say the president’s refusal to apply meaningful pressure to the Israeli regime undermines his public opposition to its actions. During the 2020 presidential primary, Biden distanced himself from competitors like Sens. Bernie Sanders, I-Vt., and Elizabeth Warren, D-Mass., by pointedly refusing to support conditioning military aid to Israel as a means to apply pressure on Palestinian rights.

Beth Miller, senior government affairs manager for Jewish Voice for Peace Action, said that Biden’s decision to forsake the use of this potential source of leverage amounts to de facto acceptance of ongoing ethnic cleansing in the West Bank. In a statement provided to The Intercept, IfNotNow national spokesperson Morriah Kaplan echoed that sentiment, saying “it is time for Biden to do what five Presidents from both parties have done — leverage US aid and weapons sales to pressure the Israeli government.” Presidents Eisenhower, Ford, Carter, Reagan, and Bush Sr. each threatened to modify or withhold economic or military aid to Israel at some point during their tenure.

The administration’s inaction puts it increasingly at odds with the Democratic base, as well as Americans as a whole. Polling from May 2021 by Data for Progress shows a clear majority of Americans and an overwhelming majority of Democrats support policies that would stop Israel’s use of U.S. aid to fund the seizure and destruction of Palestinian properties and to continue their annexation of Palestinian territory. Americans’ growing reluctance to pay for Israeli apartheid likely explains why pro-Israel groups like Democratic Majority for Israel and American Israel Public Affairs Committee have ramped up their involvement in electoral politics, especially in Democratic primaries. (Neither organization responded to a request from The Intercept to comment on this story.)

Buttu, who spoke with The Intercept from Palestine, is not shocked by Biden’s refusal to push Bennett to halt demolitions and settlement expansion. But she expressed a feeling of ongoing disbelief at the refusal of most Democratic politicians, including some progressives, to stand up for the Palestinian people.

“When it comes to demolitions, this is the part that I have never understood,” she told The Intercept. “I have worked with many of these families who have lived with the fear of demolition over their head. This is their life. These are their homes. This inflicts real trauma on kids. The fact that Israel’s never confronted about this policy is really sick. Instead, we have candidates that come forward and just behave as though this is normal.”