The U.S. likely relied in part on intercepted communications among senior Russian government and military officials. 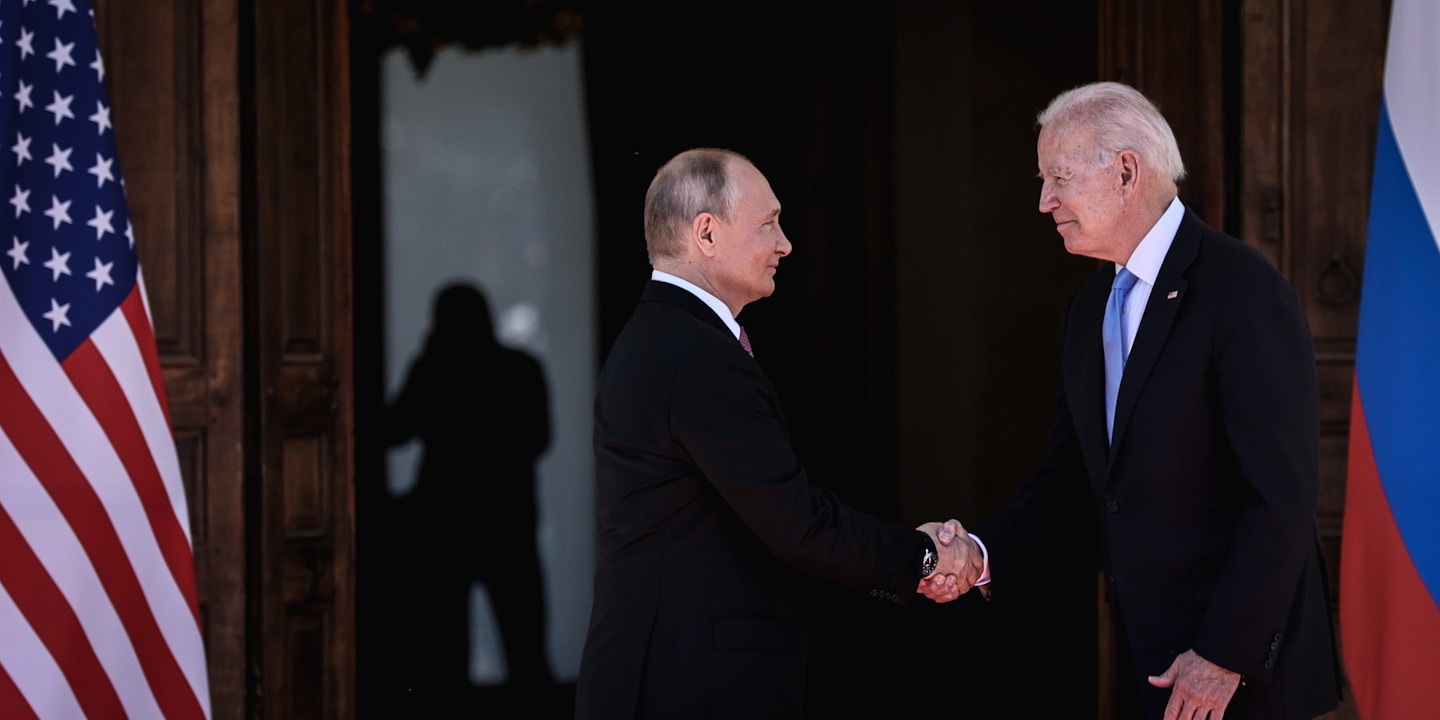 Despite staging a massive military buildup on his country’s border with Ukraine for nearly a year, Russian President Vladimir Putin did not make a final decision to invade until just before he launched the attack in February, according to senior current and former U.S. intelligence officials.

In December, the CIA issued classified reports concluding that Putin hadn’t yet committed to an invasion, according to the current and former officials. In January, even as the Russian military was starting to take the logistical steps necessary to move its troops into Ukraine, U.S. intelligence again issued classified reporting maintaining that Putin had still not resolved to actually launch an attack, the officials said. “The CIA was saying through January that Putin had not made a decision to invade, but he was putting in place pieces for an invasion,” said a senior U.S. intelligence official, who asked not to be identified in order to discuss sensitive matters. “I think Putin was still keeping his options open.”

It wasn’t until February that the agency and the rest of the U.S. intelligence community became convinced that Putin would invade, the senior official added. With few other options available at the last minute to try to stop Putin, President Joe Biden took the unusual step of making the intelligence public, in what amounted to a form of information warfare against the Russian leader. He also warned that Putin was planning to try to fabricate a pretext for invasion, including by making false claims that Ukrainian forces had attacked civilians in the Donbas region of eastern Ukraine, which is controlled by pro-Russian separatists. The preemptive use of intelligence by Biden revealed “a new understanding … that the information space may be among the most consequential terrain Putin is contesting,” observed Jessica Brandt of the Brookings Institution.

Biden’s warning on February 18 that the invasion would happen within the week turned out to be accurate. In the early hours of February 24, Russian troops moved south into Ukraine from Belarus and across Russia’s borders into Kharkiv, the Donbas region, and Crimea, which Russia annexed in 2014.

The intelligence community’s assessment that Putin waited until almost the last minute to decide to start a war with Ukraine, which has not been previously reported, is significant because it could help explain how ill-prepared and uncoordinated the Russian military has appeared since it invaded. There have been widespread reports that Putin kept many Russian leaders out of the loop, that they were stunned by his decision to attack, and that the Russian government was not fully ready for war. “I was shocked because for a long time, I thought that a military operation was not feasible. It was not plausible,” Andrey Kortunov, a member of a Kremlin panel of foreign policy advisers, told Britain’s Sky News on March 2. Kortunov said that he and other foreign policy advisers had been sidelined by Putin.

The Russian president has instead surrounded himself with a small circle of like-minded military and intelligence officials who do his bidding. This has prompted outside experts to describe the current Russian government as being run by the siloviki, a small cadre of senior people with security, intelligence, and military backgrounds. It means that an increasingly isolated Putin made the decision to invade largely by himself. But that isolation makes it difficult to control a sprawling enterprise like a major war.

It’s possible that Putin made his decision earlier than U.S. intelligence concluded that he did. Current intelligence officials who described the CIA’s reporting on Putin’s intentions refused to identify the specific intelligence the agency used to determine when he decided to invade, making it difficult to judge the quality of the assessments. For example, whether U.S. intelligence was able to determine Putin’s plans because it gained access to his personal communications — thus giving the U.S. real-time information about his thinking — remains a closely guarded secret.

The Russian president has surrounded himself with a small circle of like-minded military and intelligence officials who do his bidding.

Several former intelligence officials said they doubt that the U.S. has access to Putin’s personal communications and instead believe it is more likely that the U.S. relied in part on intercepted communications among others in the Russian government and military. As Putin issued orders, increasing numbers of government and military officials had to be notified, and those officials then had to notify others around them. As a result, the Russian president’s plans for such a large-scale invasion couldn’t remain secret for long.

While Putin’s intentions were difficult for U.S. intelligence to determine, the Russian military’s troop buildup along the border with Ukraine was much easier to monitor. Over the past year, in fact, Russia did little to conceal its huge military deployments along the border with Ukraine. Last April, U.S. intelligence first detected that the Russian military was beginning to move large numbers of troops and equipment to the Ukrainian border. Most of the Russian soldiers deployed to the border at that time were later moved back to their bases, but U.S. intelligence determined that some of the troops and materiel remained near the border, the current and former intelligence officials said. The intelligence community realized that by only withdrawing part of its forces, Russia was making it easier to mount a quick mobilization later.

In June 2021, against the backdrop of rising tensions over Ukraine, Biden and Putin met at a summit in Geneva. The summer troop withdrawal brought a brief period of calm, but the crisis began to build again in October and November, when U.S. intelligence watched as Russia once again moved large numbers of troops back to its border with Ukraine. Pentagon analysts began to warn that the scale and costs of the deployment were much larger than would be required if Putin were bluffing, said current and former officials familiar with the intelligence.

As U.S. intelligence monitored the Russian troop buildup, there was some concern among officials handling Russian operations inside the CIA about how aggressively they were being allowed to conduct spy operations against Moscow. Early in 2021, some officials involved in Russian operations inside the CIA said that they were facing at least a temporary pause on a series of sensitive covert operations related to Russia, according to a former U.S. intelligence official with direct knowledge of discussions among the officials involved in Russian operations. The former official said that William Burns, Biden’s CIA director, was seeking to temporarily halt some high-risk and potentially provocative operations to give the new administration a chance to try to reset relations with Putin after the weird and controversial relationship between Putin and Donald Trump. The former U.S. president had been investigated for his ties to Russia, and his relationship with Putin often seemed submissive, poisoning every aspect of U.S.-Russian relations.

The Biden administration “wanted to see if they could avoid kicking over a hornet’s nest called Russia.”

“There was a deep desire for a stable and predictable relationship with Russia,” the former senior CIA official told The Intercept. The Biden administration “wanted to see if they could avoid kicking over a hornet’s nest called Russia.”

A CIA spokesperson denied that there were any restrictions imposed on operations against Russia, calling the idea that Burns had sought to limit high-risk spy missions to give Biden a chance to reset relations with Putin categorically false.

Senior intelligence officials said that the only real shift in Russian operations was to increase the agency’s focus on intelligence related to Ukraine instead of pursuing other Russia-related targets. In the first few months of the Biden administration, U.S. intelligence officials began working more closely with Ukrainian intelligence to help the country prepare for a possible Russian invasion, the senior agency official said.

As the intelligence began to show the Russian escalation along the Ukrainian border, top CIA officials became increasingly focused on Ukraine long before it burst into the headlines as a global crisis. “I saw Burns in December, and he was really agitated by the Russian buildup,” said the former senior intelligence official.

Yet for several critical weeks last fall, senior policymakers in the Biden administration remained deeply split over how best to respond. At that time, the administration was reluctant to dramatically and immediately increase arms shipments to Ukraine.

Alexander Vindman, the former Army officer who handled Ukraine policy at the National Security Council and who became a whistleblower in Trump’s impeachment over the Ukraine scandal, says that Trump was largely responsible for delaying arms shipments to the country. Vindman said in an interview that the toxic politics surrounding Trump’s handling of Ukraine continued to make officials in the Biden administration wary of how aggressively to handle Ukraine policy last year.

In 2019, Trump froze military aide to Ukraine to try to pressure Ukrainian President Volodymyr Zelenskyy to investigate Biden, then a contender for the Democratic presidential nomination. Trump was impeached by the House for his attempt to pressure a foreign leader to meddle in a U.S. election but was later acquitted in the Senate. “Trump’s freeze on arms transfers made Ukraine toxic for the remainder of the Trump years, and I think Biden saw it as a toxic issue too,” Vindman said. “We lost three years’” worth of aid to Ukraine because of Trump’s efforts to intimidate Zelenskyy, he added. (Vindman testified before Congress during the impeachment; he was subsequently forced out of his job at the White House and later retired from the Army, saying that his chain of command did not shield him from pressure from the Trump administration.)

By February, however, as the U.S. intelligence community issued specific warnings that an invasion was imminent, the period of indecision among Biden administration policymakers came to an end. Since the invasion, the U.S. and its NATO allies have poured arms into Ukraine to help the nation defend itself. But Biden has imposed limits, and this week he rejected a Polish proposal to transfer fighter jets to Ukraine.

The senior intelligence official said that the Ukrainian intelligence service, which worked with the CIA to prepare for the invasion, has performed well since the Russian attack, but did not provide any details.

“Clearly Putin’s expectation was that this would be a much easier enterprise than it is,” the senior U.S. intelligence official said.