Honor Culture Is Back. We Eradicated It for a Reason.

Abraham Lincoln, Will Smith, and dueling. 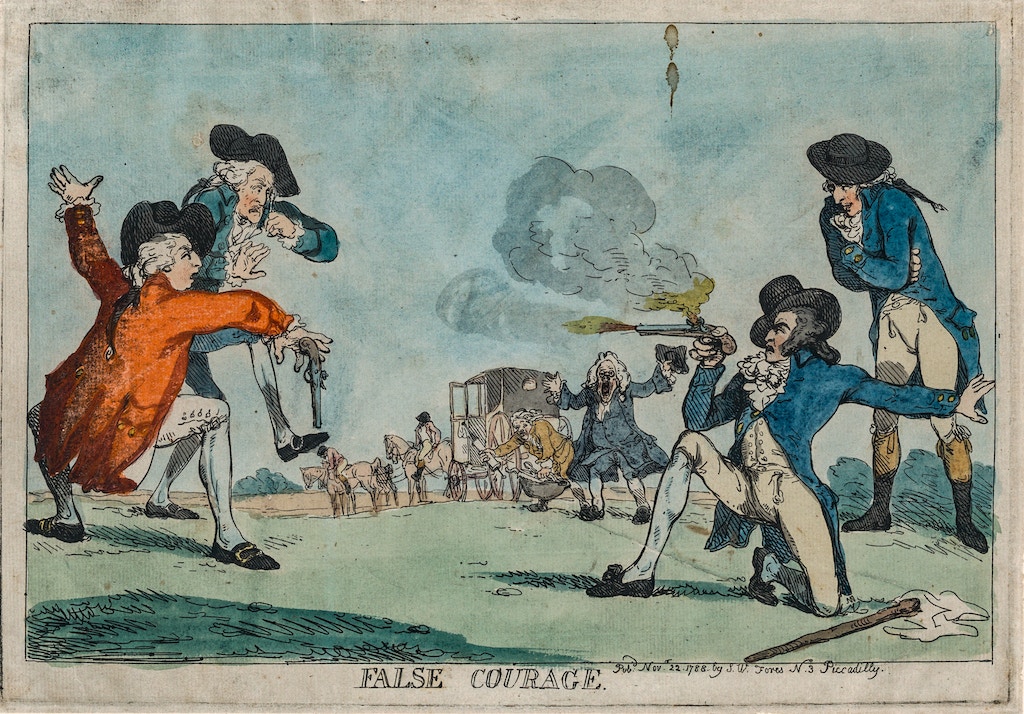 An illustration of a duel entitled “False Courage” by artist Thomas Rowlandson, published on Nov. 22, 1788.

Abraham Lincoln was dogged throughout his career by an unseemly moment that almost cost him his life. It was 1842, and Illinois, under Democratic control, announced it would no longer accept state currency to pay debts. There was no national currency yet, and the decision to accept nothing but silver and gold made the state’s paper money worthless. Lincoln, then a 33-year-old state legislator, never passed up an opportunity to attack Democrats, and he lit into the Democratic state auditor, James Shields, a close ally of state kingpin Stephen Douglas, over the decision.

And, as was strangely common at the time, Lincoln did it under a pen name: Rebecca. Playing off of drunken Irish stereotypes, “Rebecca” mocked Shields as a womanizer, writing, “His very features, in the ecstatic agony of his soul, spoke audibly and distinctly — ‘Dear girls, it is distressing, but I cannot marry you all. Too well I know how much you suffer; but do, do remember, it is not my fault that I am so handsome and so interesting.’”

It was all too much for the auditor, and, after finding out Rebecca’s true identity from the editor, he demanded his sullied honor be satisfied by a duel. The two met in front of a crowd of hundreds on a sandbar in the Mississippi known as Bloody Island; Missouri Sen. Thomas Hart Benton had killed a political opponent in a duel there in 1817. The island was chosen because it was part of neither Illinois nor Missouri, both of which had banned dueling.

Lincoln chose broadswords, thinking his height and long arms would guarantee him a win — not knowing his opponent was a master swordsman. Fortunately for Lincoln, a friend of Mary Todd’s, the local congressman, arrived in time to mediate the dispute, and the swords were sheathed.

The dueling ban, which had taken effect in several states, was progress. Nineteenth-century politics, even excepting for the Civil War, were extraordinarily violent in comparison to today. Social justice advocates were pushing the country forward in a number of battles. Some of them were just and righteous, like abolition and universal suffrage; others, like the temperance movement and Prohibition, were righteous but a bit muddled. Dueling was considered a barbaric relic of the honor culture of the Middle Ages and its aristocracy. Honor culture insisted that a slight to one’s honor, or to the honor of a lady, could only be satisfied by an expression of violence. And that expression of violence then validated the man’s position in the hierarchy.

The code of honor was slowly being rooted out of American political culture, supplanted by the idea that individual merit was sufficient to establish one’s honor, and that sharp words need only be met with sharper words. Failing that, there was a legal system. But the honor code did not go quietly, and a casual look at American culture suggests that it’s surging back.

One of the leading abolitionists of the time was former president-turned-representative John Quincy Adams, who in 1838 was serving in Congress when two members, a Kentucky Whig and a Maine Democrat, dueled over a trivial insult that didn’t even involve either of them directly. The first two shots missed, and they declared it over, but Rep. Henry Wise, a strident pro-slavery congressman, insisted on a second round. Honor-bound, the congressmen agreed — and the gentleman from Maine was killed.

One of the great successes of the movement against dueling and honor culture was to remove speech from the terrain of violence.

In the uproar that followed, Adams introduced and passed a bill to ban dueling in Washington, D.C. Author Sidney Blumenthal, in his book “A Self-Made Man,” a portrait of Lincoln from 1809 to 1849, writes that Adams “considered dueling, its Code, and the Southern concept of honor nothing but ‘an appendage of slavery.’” For Adams and other northerners, it was a relic of the worst elements of aristocracy, false virtue to mask real evil. And it was the antithesis of the American spirit, which they saw as linking virtue to freedom, hard work, and success. Three years later on the House floor, Adams attacked Wise and linked his support of slavery to his backing of nullification and dueling. Adams wrote in his diary that night that “his gang of duelists clapped their hands, and the gallery hissed.”

And so Lincoln could not claim he wasn’t aware of the changing norms around dueling. The local Whig papers excoriated Lincoln for his barbaric display, even though the duel was called off, with one paper dubbing it “the calmest, most deliberate and malicious species of murder — a relic of the most cruel barbarism that ever disgraced the darkest periods of the world — and one which every principle of religion, virtue and good order loudly demands should be put a stop to.”

Cultures of honor differ in characteristics from rural Ireland to Afghanistan to the antebellum South, but all revolve around the idea that violence is a worthy solution to a social problem or provocation. Not all slights were met with organized violence; in “The Field of Blood,” a history of violence in Congress, Joanne Freeman documents dozens of 19th-century congressional canings, pistol-whippings, knifings, and fist fights.

In 1832, a dispute between Sam Houston, the former governor of Tennessee and future president of Texas, and a congressman, William Stanbery, led to a physical altercation. As my colleague Roger Hodge writes in “Texas Blood”:

Houston recognized Stanbery on Pennsylvania Avenue and gave him a thrashing with a hickory cane he’d cut at Andrew Jackson’s Hermitage. At one point during the struggle, Stanbery got his pistol out and fired it point-blank at Houston’s heart. It misfired and the beating continued, ending with Houston grabbing Stanbery by the ankles and delivering a dramatic kick to the groin. The House of Representatives itself convened a trial, charging Houston with violating the principle of congressional privilege, which protected speech uttered on the House floor. … Houston lost [the trial] in the House but won in the court of opinion.

As Hodge points out, three months earlier Houston had met Alexis de Tocqueville on a riverboat; the meeting “confirm[ed] Tocqueville’s growing conviction … that in a democracy ‘it’s singular how low and how far wrong the people can go.’”

Public displays of violence accelerated into the Civil War and also brought the war to a head faster. In 1856, abolitionist Sen. Charles Sumner of Massachusetts was caned to within an inch of his life by a South Carolina congressman, Preston Brooks, who said Sumner had besmirched the honor of his relative and of the South. To escape censure, he resigned, but then ran in the next special election and won in a landslide.

In 1858, a pro-slavery judge in California challenged anti-slavery Democratic Sen. David Broderick to a duel. Broderick’s pistol was rigged with a hair trigger and fired as soon as he picked it up. So that counted as his shot. The judge took his time and aimed squarely at his chest, murdering him. About 30 years later, the same judge tried to kill a Supreme Court justice and was himself killed by U.S. Marshals.

In 1887, a reporter ended the career of a congressman by exposing an affair. The congressman became a lobbyist, and the two saw each other regularly in the Capitol, and the former congressman would tweak his nose or pull on his ear whenever he saw him. One day, the reporter came armed, confronted him on the stairs just off the House floor, and shot him dead. Blood stains still mark the stairwell.

As modernity set in and a meritocratic culture took hold, violence became an unnecessary way to prove one’s worth or maintain one’s reputation — and, for a while, being violent actually worked against you. Will Smith slaps Chris Rock onstage during the show at the 94th Academy Awards at the Dolby Theatre in Los Angeles on March 27, 2022.

But in places that haven’t seen that meritocracy take hold — in poor and working-class areas where no amount of merit is going to get you out, for instance — honor culture has persisted with more strength than in the suburban homes of the well-educated. The way to know which side of the line your neighborhood is on depends on whether there are universally understood fightin’ words or not. Yet we’re now seeing honor culture return to cultural spaces that had once been colonized by meritocracy. Why Will Smith slapped Chris Rock at the Oscars is beside the point. What matters is that Smith found many of his most vociferous defenders among the well-educated demographic that in a previous political era would have been leading the fight against dueling.

One of the great successes of the movement against dueling and honor culture was to remove speech from the terrain of violence. Words — even vicious, insulting ones — could be exchanged without either party feeling it necessary to respond violently to keep face. But now words are said to be violence themselves, which supposedly makes it justifiable to meet them with violence. The collapse of support for free speech, and the willingness of so many progressives to support violence in the defense of honor, reveals how the triumph of meritocracy was never real. It merely replaced aristocratic honor with a new mode of sorting power that failed to live up to its promise. Now that the sorting is so transparently at odds with actual merit, with power concentrated among the very rich and their children, the culture is reverting back to honor as a more useful store of social value.

Although it doesn’t apply to everybody. The Illinois press later revealed, according to Blumenthal, that Mary Todd had been the author of the most offending lines of poetry. “Miss M.T. wrote them in the parlor of her friend, Miss J.J. for fun,” the Telegraph reported. “No challenge will be sent in this case, the author being a female — the code does not require it.”