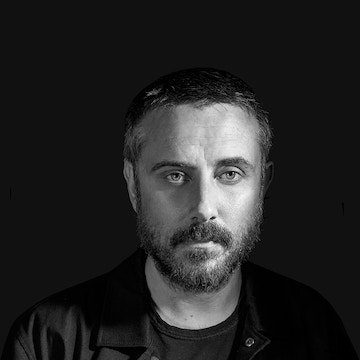 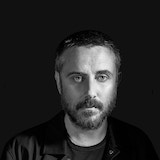 The U.S. Has Its Own Agenda Against Russia

Ukraine is ground zero for the expansion of the U.S.-Russia proxy war. 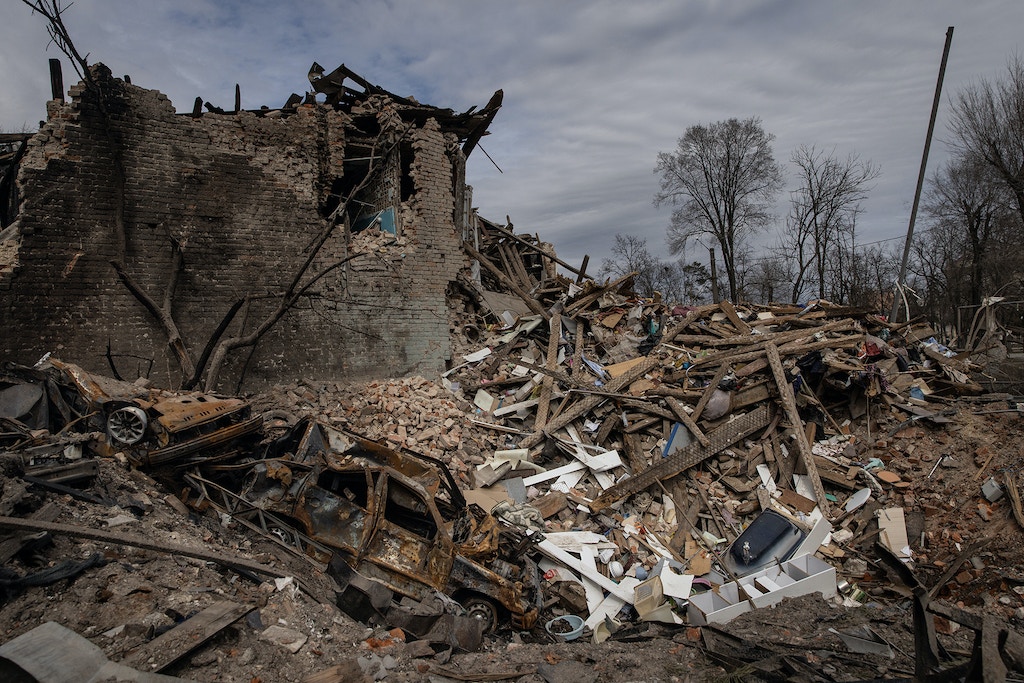 A destroyed car is seen in a crater on March 28, 2022, from a Russian attack that destroyed a house in Kharkiv, Ukraine.

Ever since Vladimir Putin launched his invasion of Ukraine, there has been an unprecedented cohesion of messaging emanating from the U.S. government, its NATO and other European allies, and large segments of the Western media establishment. As massive quantities of weapons pour into Ukraine, there has been consistent media and political agitation for President Joe Biden and other Western leaders to “do more” or answer for why they are not further escalating the situation, including through the imposition of a no-fly zone.

The White House smells Putin’s blood in the waters of his disastrous invasion. The flow of weapons, the sweeping sanctions, and other acts of economic warfare are ultimately aimed not just at defending Ukraine and making the regime pay for the invasion in the immediate present, but also setting in motion its downfall. “For god’s sake, this man cannot remain in power,” Biden said during his recent visit to Poland. The White House sought to walk back the line and clarify that it did not constitute a change in policy but was merely an expression of the president’s righteous anger. The kerfuffle over what Biden really meant is less important than the very public actions of the U.S. and its allies.

The war in Ukraine is simultaneously a war of aggression being waged by Putin and part of a larger geopolitical battle between the U.S., NATO, and Russia. “We are engaged in a conflict here. It’s a proxy war with Russia, whether we say so or not,” said Leon Panetta, the former CIA director and defense secretary under Barack Obama. “I think the only way to basically deal with Putin right now is to double down on ourselves, which means to provide as much military aid as necessary.” Speaking to Bloomberg News on March 17, Panetta laid out the U.S. strategy: “Make no mistake about it: Diplomacy is going nowhere unless we have leverage, unless the Ukrainians have leverage, and the way you get leverage is by, frankly, going in and killing Russians. That’s what the Ukrainians have to do. We’ve got to continue the war effort. This is a power game. Putin understands power; he doesn’t really understand diplomacy very much.”

It should not be assumed that the strategies and actions being employed by Washington and its allies in their proxy war against Moscow will always be in the best interest of Ukraine or its people. Likewise, Ukraine’s calls for military support and action from the West — however justifiable and sincere they are — may not be in the best interest of the rest of the world, particularly if they increase the likelihood of nuclear war or World War III. The desire to avoid this scenario by advocating for a negotiated solution to the war that addresses Russia’s stated concerns or its rationale for the invasion is not a capitulation to Putin and it is not appeasement. It is common sense.

While the fate of Ukraine and the lives of its civilian population are evoked in calls for more escalatory action from the West, it is these very people who will suffer and die in large numbers every day the war drags on. Western media coverage is often crafted to portray only one outcome as acceptable: a decisive Ukrainian victory, in which the government of Volodymyr Zelenskyy emerges from the horrors of the Russian invasion in complete control of all of its territory, including Crimea and the Donbas region. Ukraine, as a free and independent state, should be free to join NATO, and Russia has no legitimacy in questioning the implications of such a move. Advocacy for accepting anything short of this outcome is a victory for Russia and therefore traitorous to even consider.

While this position may feel morally right, particularly when it is bolstered by the ghastly images of human carnage wrought by Russian forces and the pleas of Ukrainians for the world to intervene much more directly, embedded within this mindset is a morally dubious principle: Ukrainians should bear the human cost not just of the defense of their nation, but also of the larger-scale agendas of the U.S. and other Western governments. In her recent essay for The Atlantic, Anne Applebaum, a prominent Russia hawk, argued that now is the time for the U.S. and its allies to embrace a new Cold War. “As long as Russia is ruled by Putin, then Russia is at war with us too. So are Belarus, North Korea, Venezuela, Iran, Nicaragua, Hungary, and potentially many others,” she wrote. “There is no natural liberal world order, and there are no rules without someone to enforce them.”

The routine belligerence exhibited by countless politicians, pundits, and media figures about taking the fight to Putin in Ukraine is largely chickenhawkery. “Ukrainian President Volodymyr Zelensky is today’s Churchill, and President Biden is today’s FDR,” wrote the notorious war promoter Max Boot in the Washington Post. “A Russian defeat,” Boot argued, “is essential to save Ukraine and safeguard the liberal international order. The Ukrainians are willing to fight on despite their heartbreaking losses. We just need to give them the tools to finish the job.” Yet when you listen to the fine details of Ukraine’s own negotiators and leaders, it’s clear that they understand that the war does not end with the swift annihilation of Putin, the downfall of Russia, or with a clean and complete Ukrainian retention of its territorial sovereignty. That’s why Zelenskyy’s government has acknowledged that the issue of NATO membership, a formalized neutrality status, and an internationally brokered process on the status of Crimea will all be on the table.

There has been much noise about Russia’s recent indications that it was drawing down its military actions in parts of Ukraine, particularly around the capital Kyiv. The U.S. and NATO have acknowledged a partial drawdown but asserted that Russian forces appear to be repositioning, likely for use in the east. Russia has also said as much itself. Moscow’s position is that “the main goals of the first stage of the operation have generally been accomplished.”

There is a peculiar dynamic surrounding the analysis of Putin’s comments on his intentions for Ukraine. He is accused of lying when his remarks undermine the U.S. narrative, but we are told to believe he is absolutely telling the truth when his pugnacious threats bolster the U.S. position. Whether or not Putin intended to seize all of Ukraine and become an imperial occupier, he did seem to believe his invasion could cause the Ukrainian government to collapse and its leaders to flee in fear. That did not happen. Instead, U.S. and NATO-armed Ukrainian forces outside Kyiv have fought the Russian troops ferociously and inflicted significant losses against them on the battlefield. At the same time, by opening multiple fronts, Moscow forced Ukraine to defend vital territory, including its capital. This strategy exacted a tremendous human toll on the Russian military, but it did take some heat off Russian forces in the Donbas territories in the east, which Putin has cited as his territorial priority in the operation.

But the question of Putin’s original intent — to take Kyiv or to use that threat as a strategy to spread Ukraine’s defenses thin — is now largely irrelevant except in the rhetorical battlespace focused on Russian weakness, incompetence, or failure.

The most contentious issue in the negotiations to end the war will likely have little to do with NATO membership. Zelenskyy has already conceded that to end the war Ukraine will have to drop that ambition and adopt a neutral and nonaligned status, though he does want to continue the pursuit of joining the European Union. Russia will certainly oppose any attempts for Kyiv to win a backdoor “Article 5” status that could trigger defense of Ukraine by Western powers in cases of future military actions by Moscow. Ukraine has suggested that it would also want China and Turkey to be a part of such a guarantee, not just adversaries of Russia. There are indications that the U.S. doesn’t think the proposal is viable, and Britain’s deputy prime minister bluntly stated, “Ukraine is not a NATO member,” adding, “We’re not going to engage Russia in direct military confrontation.”

Based on the reports out of the recent negotiations in Turkey, it seems that the most incendiary questions will revolve around the breakaway republics in the Donbas region. Ukraine has effectively said it wants a return to the pre-invasion status quo, which would mean erasing the Putin-recognized declarations of independence from Donetsk and Luhansk. Russia, which is currently expanding its control over the Donbas and seizing more territory, is unlikely to agree. This dynamic more than any other could delay or block any meaningful resolution and would be a central focus in a potential summit between Zelenskyy and Putin.

Once there is a brokered agreement, the flow of Western weapons into Ukraine and Russian military support for the separatists will result in a constant state of war footing for many years to come. A cloud portending more fighting and bloodshed will remain hovering over eastern Ukraine. If U.S. and other NATO troops resume their training exercises in Ukraine, as Biden has indicated they should, this means that there will always be a risk of incidents that could quickly escalate.

This six-week war surely has left the war industry jubilant. In Washington, Biden recently proposed what would be the largest U.S. “defense” budget in history, more than $813 billion. Germany and other European countries are publicly committing to buying and selling more weapons and spending more on defense. NATO is raising the prospect of expanding its permanent military presence in Europe and Washington is reasserting its political dominance over Europe on security matters. But despite the image of global unity of cause being promoted by the U.S. and its NATO allies, several large and powerful nations, including China, India, Indonesia, and NATO member Turkey, are not marching to Washington’s drumbeat — not in the proxy-war business and not in the policy of sanctioning and vilifying Russia.

The overt war in Ukraine will have to end at the negotiating table. But the proxy war is escalating and will have consequences that extend far beyond the current battlefield.