Cable News Military Experts Are on the Defense Industry Dole

Many former military and public officials appearing in the news have more than a patriotic interest in a continued occupation. 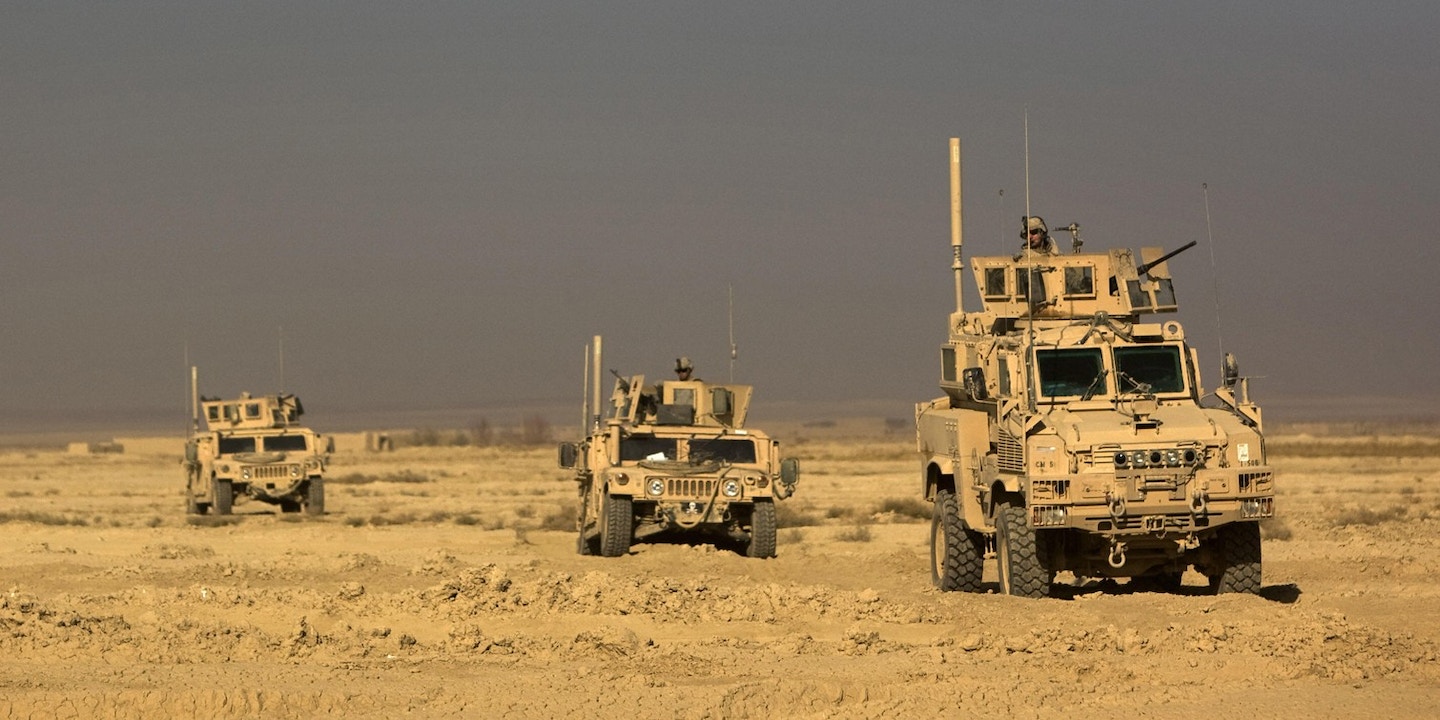 Jack Keane has had a busy week.

The retired four-star general has been making the cable news rounds, offering scathing criticism of the White House in wake of the Taliban takeover in Afghanistan. On Wednesday, he appeared on Fox News, where he told host Harris Faulkner that the administration “made a terrible mistake in pulling our troops out and giving the Taliban the opportunity to take the country over.”

On another Fox News program earlier in the week, Keane attacked President Joe Biden’s withdrawal plan as “embarrassing” and “ill-conceived,” suggesting that the administration should have delayed until “sometime next year.”

What neither Keane nor the host in either of these segments mentioned is that he has more than merely a patriotic interest in the continued occupation. Keane, a former board member at weapons maker General Dynamics, is chair of AM General, the company that makes Humvees. He also sits on the boards of Cyalume Technologies Inc., which manufactures military chemical lights and other technology deployed on the battlefield in Afghanistan, and the Institute for the Study of War, a think tank that publishes defense policy proposals with the aim of “developing the next generation of national security leaders” and is backed by CACI International Inc., General Dynamics, and other defense contractors.

Keane was just one of a parade of ex-military and ex-public officials who appeared on cable news this week to castigate the Biden administration for its withdrawal or for the way it was carried out. Among the other talking heads who took to cable news segments or op-ed pages without disclosing their defense industry ties were retired Gen. David Petraeus; Rebecca Grant, a former staffer for the Air Force secretary; Richard Haass, who worked as an adviser to then-Secretary of State Colin Powell; and former Secretary of State Condoleezza Rice.

Cable hosts described these guests by their military credentials — not their current jobs as representatives of the defense industry, a sector that has seen extraordinary profits from the 20-year occupation of Afghanistan.

Petraeus, a retired four-star general who leaked classified information to his mistress and biographer, serves on the board of Optiv Security, a large cybersecurity firm that contracts with the Department of Defense, and is a partner at KKR and Co., a global private equity firm with assets in the defense sector. In early 2020, KKR bought Novaria Group, a corporation holding a growing number of aerospace manufacturers. He called the Afghanistan withdrawal a “Dunkirk moment” on Fox News and told the BBC, “We should literally reverse the decision,” adding, “I feared we would come to regret the decision and we already are. There’s no good outcome unless the United States and its allies recognise that we made a serious mistake.”

Like Keane, Petraeus sits on the board of the Institute for the Study of War; the two ex-military officials are joined by two executives at major defense contracting companies and former Sen. Joe Lieberman, D-Conn., known for being a “friend of defense contractors.”

“Nothing shows the value of American force presence like the absence of American forces as we’ve seen in the past month,” said the think tank’s founder and president, Kimberly Kagan, in an interview with Fox News. “America lost the war in Afghanistan. But it matters that we fought it,” wrote its national security fellow Jennifer Cafarella in a blog post. “No nation on earth has ever done more to advance the cause of freedom. No people has sacrificed more. Americans should be proud of that fact, even in defeat.”

Haass, described on MSNBC as the president of the Council on Foreign Relations, questioned the decision to withdraw and leveled criticism at the way it was handled. “The first order question is, why the policy?” he said. “I think an incorrect policy was selected here by the president, obviously against many of the advices [sic] he was receiving from the military and others.”

Haass did not mention that he sits on the board of investment firm Lazard, which “actively serves companies in the industrials sector, including aerospace and defense,” nor did he mention his role with Palantir, a leading tech firm in the defense intelligence space.

Former Secretary of Defense Leon Panetta appeared on CNN with John King to lament a “Bay of Pigs” moment; he was referred to by his previous government service for Democrats rather than as senior counselor to Beacon Global Strategies, a defense consulting firm, or as a member of software corporation Oracle’s board of directors.

Cable news has been criticized in the past for its refusal to reveal conflicts of interest. In 2008, the New York Times exposed direct influence by the Pentagon of retired generals appearing on cable to talk about the wars in Iraq and Afghanistan. Last year, The Intercept uncovered countless links between on-air former military figures defending the assassination of Iranian Gen. Qassim Suleimani and the military-industrial complex.

These conflicts of interest don’t just manifest on cable — they can also be found in online and print journalism.

Grant penned a column for Fox News arguing that the blame for the chaos in Afghanistan rests squarely with Biden and Secretary of State Antony Blinken. To its credit, Fox noted in her bio that as head of IRIS Independent Research “she has specialized in research for government and aerospace industry clients.” When she appeared on CNN Monday to make the same case, viewers were not told of her defense industry ties.

Rice, secretary of state under President George W. Bush, took to the pages of the Washington Post to argue for more time. “Twenty years was not enough to complete a journey from the 7th-century rule of the Taliban and a 30-year civil war to a stable government,” she said, eliding the U.S. role in toppling the pre-Taliban government. “Twenty years may also not have been enough to consolidate our gains against terrorism and assure our own safety. We — and they — needed more time.” She was described with her government titles as well as a current one: director of the Hoover Institution at Stanford University. Left off the bio was her service on the board of C3 AI, a defense contractor.

Many media outlets also tapped former members of Congress to weigh in on the troop withdrawal without disclosing financial ties to the defense contractors that have profited handsomely from the conflict.

“If I was in charge, I wouldn’t have made this decision,” said former Sen. Kelly Ayotte, R-N.H., speaking to NH Journal. Ayotte warned that leaving Afghanistan would mean that Al Qaeda, the Islamic State, and other terror groups would rapidly “reconstitute in a way that could threaten our homeland in the course of 18 to 24 months.”

Earlier this week, she also appeared on Fox News, slamming the withdrawal as an intelligence failure that “will embolden countries like China and Russia in furthering their narrative, which I do not believe is true, that the U.S. is no longer the superpower.”

But the outlets that gave Ayotte a platform did not disclose that she currently serves as a board member to BAE Systems Inc., the U.S. subsidiary of the British defense conglomerate that has raked in substantial defense contracts throughout the war in Afghanistan.

Trey Gowdy, a former GOP lawmaker from South Carolina, has similarly slammed the Biden decision. He appeared last Sunday on Fox News to deliver a stern monologue, warning that the Biden administration had not “kept our word” to protect the Afghan people. After his service in Congress, Gowdy joined Nelson Mullins Riley & Scarborough LLP, a South Carolina-based law and lobbying firm that serves a range of defense contractors before Congress and helps defense clients navigate the procurement process with the Pentagon. Fluor Corp., the largest fiscal year 2016-fiscal year 2021 contractor in Afghanistan, which obtained over $3.1 billion in Afghanistan-related projects, is among Nelson Mullins’s most lucrative lobbying clients. (Gowdy has since left the firm.)

Gowdy went on to suggest that U.S. troops should not return home unless “we’re leaving Afghanistan safer and freer and better for Afghan women and girls.”

Jim Naureckas, an editor at Fairness & Accuracy in Reporting, or FAIR, a progressive media watchdog, said such conflicts of interest put a premium on potential atrocities over existing ones. “The imaginary future bloodshed of the Taliban has so much more emotional weight in the coverage than the actual people who have been killed by the U.S. in the last 20 years,” he said. “There’s a symbiotic relationship between media outlets who need sources, the weapons industry that needs favorable news coverage, and the former military officials who need jobs, and it all works out together.”