Surrender or Withdrawal: The Afghanistan Contradiction

An orderly exit from Afghanistan required admitting defeat and negotiating the unutterable: surrender to the Taliban. 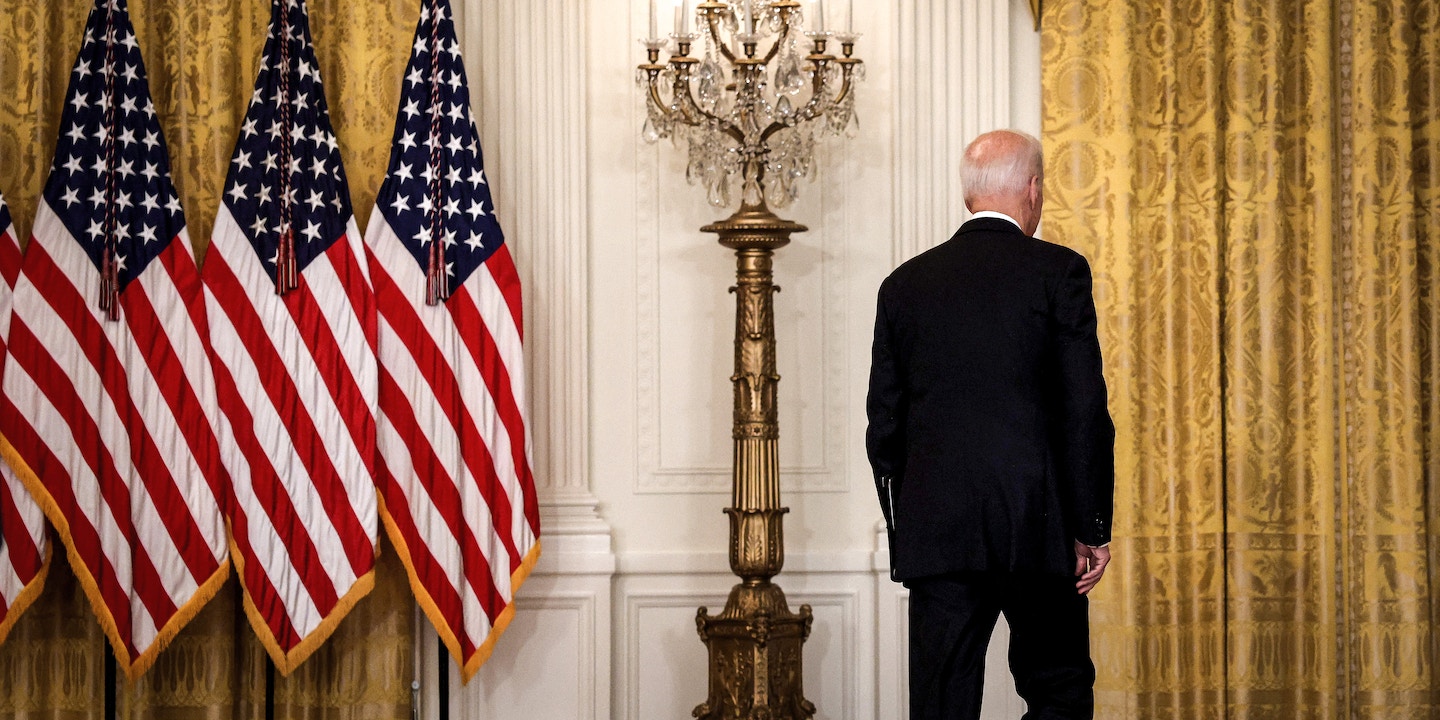 At the heart of the criticism of the way the U.S. withdrawal from Afghanistan has unfolded is a contradiction that nobody in the American media or in public policy wants to grapple with.

As President Joe Biden acknowledged Monday afternoon, the images coming out of Kabul are indeed gut-wrenching, and they are also what Donald Rumsfeld, President George W. Bush’s secretary of defense, once called, in a different context, “untidy.” But the only way for there to have been an orderly transfer of power in the wake of the U.S. departure was for the process to have been negotiated as a transfer of power. And to negotiate a transfer of power requires acknowledging — and here’s the hard part for the U.S. — that power is transferring.

Therein lies the contradiction: An orderly exit required admitting defeat and negotiating the unutterable: surrender to the Taliban.

Instead, the U.S. preferred to maintain the fiction that it was handing over power to the Afghan government, whatever that was, and to former President Ashraf Ghani. We would rather risk the chaos we’re now witnessing than admit defeat. After all, it’s mostly not our lives on the line anymore, but rather the lives of Afghans who helped us over the past 20 years.

And no amount of time and preparation would have fully resolved that problem, because the U.S. immigration bureaucracy, in league with the State Department’s special visa program, is not designed to work. It can take an average of 800 days for an application to process, by which time Biden may no longer even be president. And those are the successful applications. We are not a country that places any value on helping desperate people migrate to our shores, and to paraphrase Rumsfeld again, you retreat from war as the country you are, not as the one you might wish to be.

The same Catch-22 applied to all the military hardware. Biden has been criticized for letting it fall into Taliban hands, but he was turning supplies and weapons over to the Afghan National Army. Had he instead shipped it all home, the army would have cried foul, and that would have sent a signal that things were falling apart. The same with refugee evacuation: Shipping out refugees in droves would signal that the U.S. had lost complete confidence in the government, which would then hasten its downfall. Maintaining the fiction that the Afghan government was a real and going concern required treating it like one. Like any confidence game, it lasts only as long as people believe in it.

In other words, to avoid the scenes we’re now seeing, the U.S. would have had to negotiate the terms of a surrender to the Taliban. Nobody in the national security establishment was recommending any such thing, and if they weren’t, then they have no grounds to speak after the fact. The contrast with the post-Soviet period is instructive as to what we were actually building in Afghanistan — or not building.

In the 1960s and ’70s, Herat, Kandahar, and Kabul — cities in Afghanistan — were all major stops on what was known then as the “hippie trail.” It wasn’t unusual for hippies looking to see a new part of the world to spend a few months there.

In 1973, after psychologist and psychedelic drug advocate Timothy Leary escaped prison, the Drug Enforcement Administration found him in Kabul. It was a cosmopolitan, forward-looking scene, and its politics reflected that attitude. Outside the city centers, life went on much as it had for centuries. In 1978, a radical element within the People’s Democratic Party of Afghanistan, or PDPA, which was the local communist party, staged a coup and took power. The Soviet Union was alarmed, lacking confidence that the party was ready to govern. What a lot of people don’t understand about the Soviet Union after World War II is that it spent much of its time urging its allies around the world not to get too crazy. The Soviets were partial to the moderate wing of the PDPA and counseled against a number of mistakes they ended up making. As journalist Christian Parenti has written, the Soviets rejected 13 requests from the party to come in and help. As one Soviet official replied: “We have carefully studied all aspects of this action and come to the conclusion that if our troops were introduced, the situation in your country would not only not improve but would worsen.”

But it was an assassination that eventually brought them in. In 1979, President Nur Mohammad Taraki was assassinated on the order of Prime Minister Hafizullah Amin. The Soviets thought that Amin had gone too far — they invaded, cornered him, and killed him, installing a new leader.

The United States, fresh off its loss in Vietnam, saw an opportunity to inflict a “Vietnam” on its enemy and ramped up its support to the mujahideen. In February 1989, the Soviet Union finally left. The next month, the united mujahideen made their move to take over the country, and the Afghan government fought them off, sending them into disarray. The Soviets hoped that the U.S. would help forge a national reconciliation, and some elements of the George H.W. Bush administration wanted to do that, but others argued instead for bleeding the Afghans as much as possible. So we continued funding the war against them.

Yet the PDPA, then under President Mohammed Najibullah, held strong for another three years before finally falling to our mujahideen. The PDPA, for all its many faults and abuses, had not been kleptocratic and had genuinely invested in development. 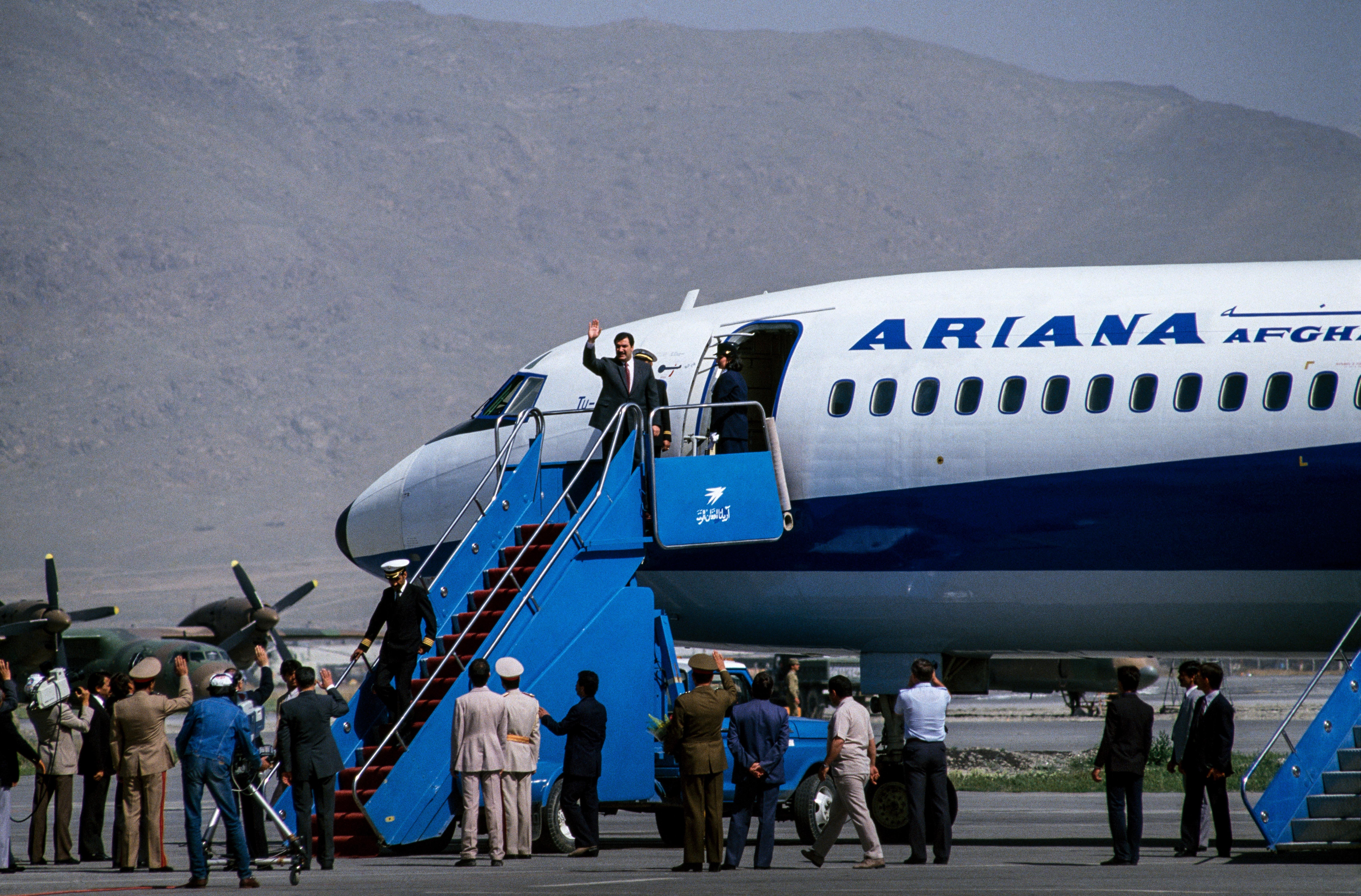 As onlookers watch from the tarmac, Afghan President Mohammad Najibullah waves from the stairs in Kabul, Afghanistan, on May 4, 1988.

Once Kabul fell, the lights literally went out, and the country descended into civil war, which the world was content to ignore. The Taliban eventually emerged from this civil war as the victorious faction and took over in 1996. Their imported extremism wasn’t popular, but their ability to actually govern in areas they controlled, and their reputation for anti-corruption, gave them a base of support. They found Najibullah holed up in a United Nations compound in Kabul, grabbed him, tortured him, castrated him, and killed him. The Taliban’s rule would only get worse from there, as our one-time asset Osama bin Laden set up shop in Afghanistan and began plotting the work he’s now remembered for.

When the U.S. invaded after 9/11, the Taliban quickly offered to surrender and also offered to turn bin Laden over to a third party to be tried. For years, when conflict had ended in Afghanistan, one side surrendered and was brought back into society. That’s how it works in a civil war, when your opponents don’t have a country to go home to. That’s how it worked here for the U.S. Civil War. But the U.S. said no and rejected the surrender, preferring all-out war instead. In the face of the American onslaught, most Taliban fighters faded from the battlefield and ceded the country to the warlords who had previously been in power. Those warlords, however, were not tasked by their American overseers with creating an inclusive government that provided for the material or cultural benefit of the Afghan people. Instead, the main task given to them was to find and hunt Taliban or Al Qaeda fighters, to help with drone strike targeting, and to help build up an Afghan army that, theoretically, could stand on its own once the U.S. left. But there weren’t many Taliban left, and there were close to zero Al Qaeda fighters, so the warlords largely manufactured enemies, siccing the U.S. military on internal rivals. Instead of any serious development, the warlords stole the reconstruction money and funneled it to bank accounts in Dubai, where many of them are now headed.

It’s easy to see why the U.S. preferred chaos to acknowledging that reality.