New York’s Eric Adams became the latest mayor to clear out unhoused communities — a cruel reminder of how the liberal establishment fails the neediest. Sanitation workers clear an encampment of unhoused people in Los Angeles on March 17, 2022.

From New York City to Los Angeles, Portland, Oregon, and Washington, D.C., a growing list of major cities across the country are escalating a brutal war on their poorest denizens. No policy makes this clearer than the recent and aggressive sweeps of homeless encampments nationwide without any serious options for safe long-term shelter, let alone permanent housing.

In New York City alone, Mayor Eric Adams in March ordered the clearance of hundreds of homeless encampments; he recently announced that 239 of 244 sites had been removed, primarily in Manhattan. With hardly any notice, dozens and dozens of unhoused people saw their tents, mattresses, and makeshift shelters swept into garbage trucks. The mayor’s claim that these sweeps are about moving individuals into safe shelter was immediately belied by the fact that only five people whose encampments were destroyed have accepted a shelter bed.

In Seattle, after a weekslong standoff between police and activists attempting to protect a homeless encampment, cops cleared the space on March 2. Los Angeles has seen multiple sites where unhoused people erected temporary shelters swept away this year in militarized raids. Dozens of encampments have been cleared in Portland. According to the National Coalition for the Homeless, at least 65 U.S. cities are criminalizing or sweeping encampments.

Many of the major cities carrying out sweeps are under Democratic leadership — a grim reminder that necropolitical population management is a bipartisan approach. And they have a lot of targets and victims in their war: Over half a million people across the U.S. experience homelessness on any given night. While a number of politicians from the Democratic Party’s left flank, including New York state Sen. Julia Salazar and New York City Council Member Jennifer Gutiérrez, have criticized the violent displacement of unhoused communities, the liberal establishment continues to pledge allegiance to market forces.

Meanwhile, policies that criminalize poverty — from the war on drugs to the penalization of panhandling — create a steady flow of bodies into the glutted prison-industrial complex, creating a near-inescapable cycle of immiseration and incarceration. None of the excuses given for carrying out these cruel policies hold any water. Each and every mayor who has enforced encampment clearance has made claims to public safety, citing upticks in crime and alleged concern for unhoused people themselves.

In New York, Adams’s disdain for the unhoused has been laid bare. “This is the right thing to do because there is no freedom or dignity in living in a cardboard box under an overpass,” he said last week, claiming that it would take time to build trust such that unhoused people would accept shelter beds. Given his already young record, Adams’s remarks about dignity are laughable. He cut $615 million from the city’s homeless services agency — a fifth of its operating budget — while dramatically increasing the policing of homelessness on the subways. He has referred to homelessness as a “cancerous sore.”

Instead of offering dignity, freedom, and resources, here’s what Adams offers unhoused New Yorkers: to be criminalized, forced to choose between street sleeping without the relative security of an encampment and accepting a bed in a shelter system renowned for violence and poor management.

Plans to turn empty hotels into semipermanent housing have stalled and look ever more imperiled as New York’s embattled tourist industry rebounds. Adams announced the creation of hundreds more safe-haven shelter beds, which offer more resources than normal city shelters — a welcome move, but a Band-aid over a bullet wound, which will grow ever more fatal through a budget that prioritizes policing and treats health care and housing with austerity logic. 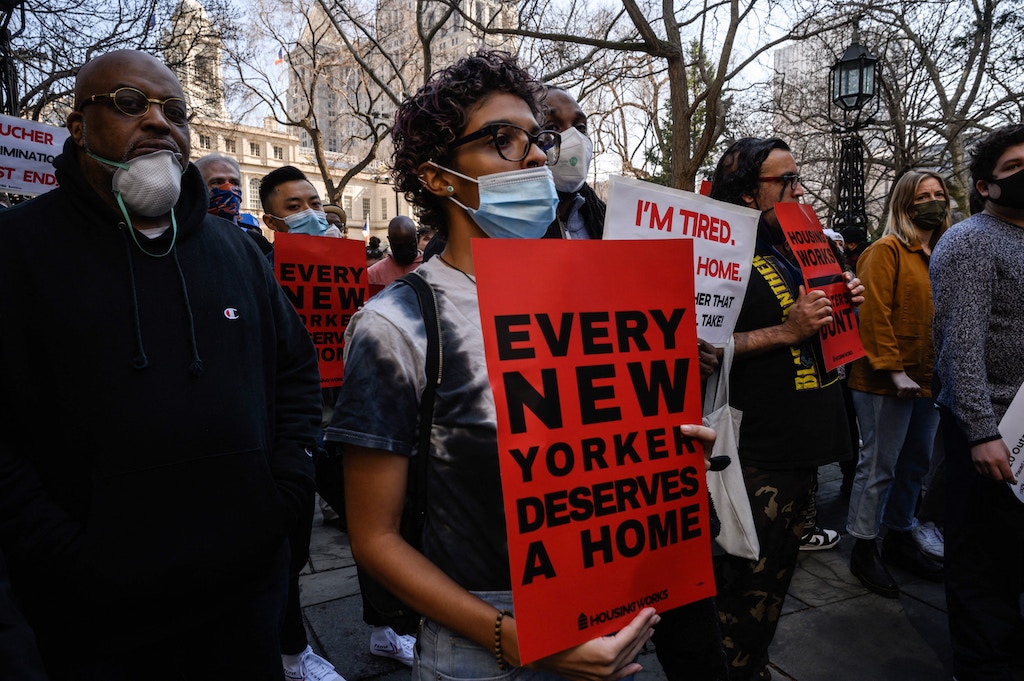 Activists, supporters, and members of the unhoused community attend a protest calling for greater access to housing and better conditions at homeless shelters in New York on March 18, 2022.

Where are the unhoused supposed go when their temporary shelters are destroyed? In Los Angeles, city officials are embracing the clearance of encampments deemed eyesores, but homelessness advocates and service providers continuously assert that there is not enough temporary or permanent housing for those displaced by raids. The same is true in every major city.

“The policy of criminalizing homelessness has never worked,” Georgia Berkovich, director of public affairs at the Midnight Mission, which offers emergency and social services to unhoused people in LA, told NBC. “We need more beds. We need more housing.”

There is more than ample evidence that “broken windows” policing, of which encampment sweeps are a part, entrench rather than counter poverty.

The sentiment has been echoed by longtime organizers and homelessness organizations nationwide. “Private rooms and permanent housing. That’s what people want,” Jacquelyn Simone, the policy director for the Coalition for the Homeless, told the New York Times. “You don’t have to do heavy-handed policing to convince someone to come in off the streets if you’re actually offering them an option that is safer and better than the streets.”

Those on the front lines of this work have been unwavering on this line: Carceral approaches and sweeps aiming to remove homelessness from sight — and consistently into jails and prisons — have never worked as solutions to the humanitarian crisis unhoused people face. It would take extraordinary credulity, after decades of war on the poor, to think that city officials choosing these policies again and again have the well-being of the poorest in mind.

There is more than ample evidence that “broken windows” policing, of which encampment sweeps are a part, entrench rather than counter poverty. Where the liberal establishment fails to serve the poor with encampment sweeps, it succeeds in offering cleared space to tourists and real estate interests.