Military documents reveal a flawed “collateral damage estimate” before an airstrike that killed scores of Iraqis in 2015. 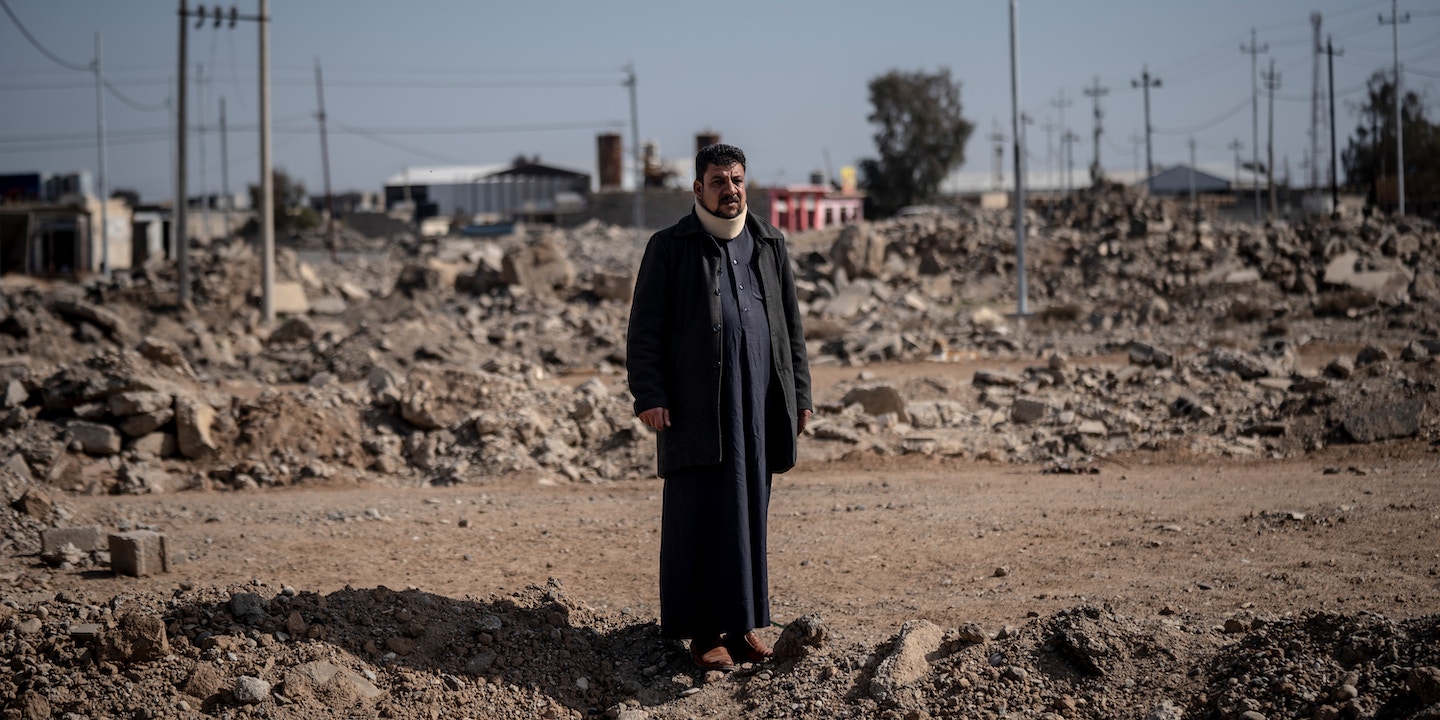 When the U.S. military was planning an airstrike on an Islamic State bomb factory in Iraq, it failed to adequately consider the possibility of secondary explosions from munitions stored there, according to military documents that have been hiding in plain sight for several months. The bomb factory in the city of Hawija reportedly contained more than 18,000 kilograms of explosive material — and secondary explosions from the 2015 airstrike killed scores of Iraqis and damaged or destroyed thousands of homes. One of the survivors later told an interviewer from the Iraqi NGO Al-Ghad League for Woman and Child Care, “I thought it was a nuclear bomb.”

In the wake of the carnage, the chief of targets for U.S. Central Command insisted in an email, included in a detailed follow-up assessment of the attack by military investigators, that the strike had been conducted by the book, including the pre-attack “collateral damage estimate,” or CDE. “My targeteers actually spent hours working and reworking this target just to make the CDE ‘executable,’” he wrote in the email. “This was a perfectly accurate CDE call,” he insisted, emphasizing in another email that “CDE Methodology does not account for secondary explosions.”

The emails and other investigation documents are included in 73 pages of post-strike assessments of the Hawija attack that are part of a 5,400-page archive of the Pentagon’s confidential reviews of civilian casualty allegations resulting from U.S.-led airstrikes in Iraq and Syria. The archive was published in December by the New York Times, which obtained the documents through the Freedom of Information Act. The documents, part of the Times’s award-winning “Civilian Casualty Files” series, offer an unvarnished glimpse of the faulty intelligence and inaccurate targeting that led to thousands of noncombatant deaths. They also offer a look into little-known policies and procedures — such as the failure to factor secondary explosions into estimates of potential collateral damage from an attack on a bomb factory. Ashwaq Ebad ul Kareem Sharif, left, sits with her son Omar, whose face was burned as a result of the June 2015 airstrike and subsequent secondary explosion in Hawija, Iraq, in February 2022.

“It is stunning that secondary explosions aren’t factored into collateral damage estimation — especially in this case, where the target was an explosives factory,” said Annie Shiel, the senior adviser for U.S. policy and advocacy at the Center for Civilians in Conflict. “It’s also illustrative of the broader ways the U.S. and its partners have failed to address not just direct civilian deaths and injuries, but also the wide range of reverberating harms that devastate communities for years to come, as civilians in Hawija have experienced firsthand — things like loss of livelihoods and essential services, displacement, public health crises, food insecurity, and long-term psychological trauma.”

The U.S.-vetted attack on the vehicle-borne improvised explosive device, or VBIED, factory in Hawija was outsourced to two Dutch F-16s that struck the site on the night of June 2-3, 2015. The attack and secondary explosions killed at least 85 civilians, may have injured 500 or more people, and reportedly damaged 1,200 businesses and 6,000 homes, according to a new report by researchers from Al-Ghad, PAX (a Dutch civilian protection organization), and Utrecht University.

“Overnight, I lost my soul, my body, my family, everything,” Abdullah Rashid Saleh, whose five children and two wives were killed in the strike, recalled in a 2021 interview with the research team that’s included in the report. “I want to meet the person who killed my family and ask him why did he do that?”

Targeting of the VBIED factory was approved by Lt. Gen. James Terry, the commander of the Combined Joint Task Force — Operation Inherent Resolve, according to an August 2015 Army investigation, which was also released in the Times’s “Civilian Casualty Files.”

Collateral damage estimates use complex modeling to predict the anticipated civilian harm from a strike, but the Hawija documents demonstrate that CDEs can be deeply flawed. While estimates take potential chemical, biological, or radiological plumes into account, bombing an “active ISIL VBIED and IED factory and weapons cache” did not raise any red flags beyond concern for a shed that the U.S. military deemed “the only collateral structure … estimated to be affected by any of the weapons.”

“I do not think that anyone could have predicted the magnitude of the explosion and effects in the surrounding neighborhood,” wrote the chief of targets, whose name is redacted from the documents. “Secondary effects are impossible to estimate with any level of accuracy.”

“One single airstrike can cause reverberating civilian harm effects that last years, even generations.”

But in 2020, the U.K.-based airstrike monitoring group Airwars reported that a Dutch Ministry of Foreign Affairs email from June 2015 noted an estimate of “probably more than 18,060 kilos of explosives stored, making this the largest ISIS IED factory ever.” Last year, when the U.S. Navy detonated roughly the same amount of explosives — 40,000 pounds — near its new aircraft carrier to test the ship’s combat survivability, it registered magnitude 3.9, the equivalent of a small earthquake.

“It may not be possible to determine the effects of a secondary explosion,” explained Sarah Holewinski Yager, a former senior adviser on human rights to the chairman of the Joint Chiefs of Staff and now the Washington director at Human Rights Watch, “but it’s clearly possible to understand that explosives are present and even the general magnitude of what an explosion might look like.”

Almost seven years after the attack, Hawija has never recovered, according to the new report. “The airstrike killed breadwinners and destroyed many workplaces and so cost many people their livelihood; because people’s homes had become uninhabitable, they became displaced; damage to the electricity network reduced civilians’ access to clean (and thus safe) drinking water,” it states. “This demonstrates how one single airstrike can cause reverberating civilian harm effects that last years, even generations.”

After Dutch media exposed the Netherlands’s responsibility for the Hawija strike, lawmakers set up a fund to help reconstruct the city. But the 4.4 million euros allocated is not spent in consultation with local authorities, according to the report, and is insufficient to meet ongoing needs. Neither the Dutch nor the U.S. government has ever offered an apology to survivors or individual compensation, which is hardly unique. “There are thousands of civilians harmed by U.S. military operations who never even received acknowledgement of the harm they suffered,” Yager told The Intercept. “Those involved in Hawija absolutely deserve amends.”

Central Command and the Combined Joint Task Force — Operation Inherent Resolve told The Intercept they were unable to answer questions prior to publication. Earlier this week, at a House Armed Services Committee hearing on the 2023 Pentagon budget, Rep. Sara Jacobs, D-Calif., asked whether the Defense Department was planning to revisit civilian harm cases, including those in the Times’s “Civilian Casualty Files.” Secretary of Defense Lloyd Austin replied, “At this point we don’t have an intent to re-litigate cases.”