Zelenskyy Is Absolutely Right: The U.N. Must Be Reformed. But It Never Will Be.

The veto wielded by Russia — and the U.S. — in matters of war should be eliminated. But Russia and the U.S. will never permit that. 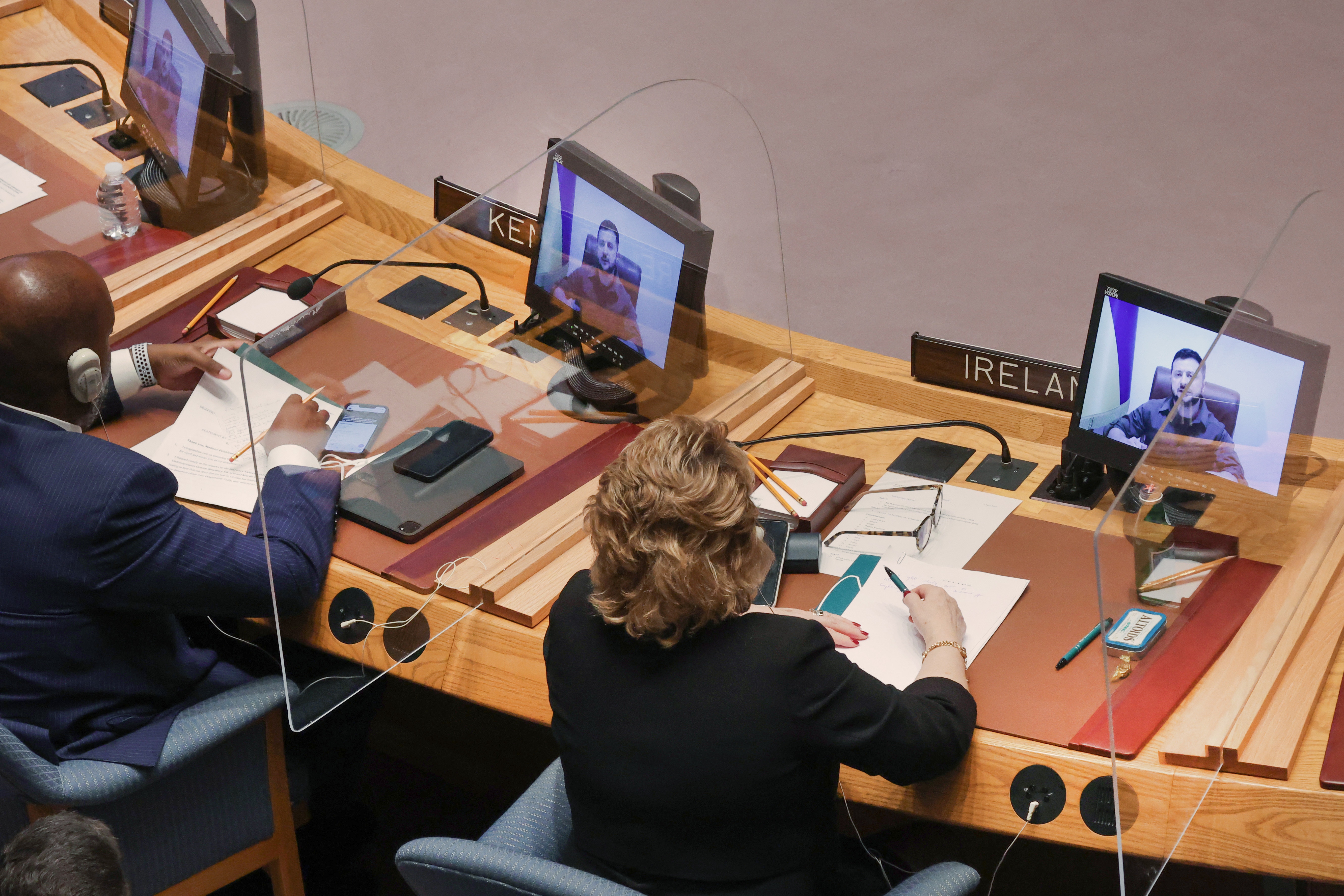 Then Zelenskyy said something that was intellectually profound, and emotionally and morally true — but, in one key respect, factually false:

Where is the security that the Security Council needs to guarantee? The United Nations can be simply closed. Ladies and gentlemen, are you ready to close the U.N.? Do you think the time of international law is gone? If your answer is no, then you need to act immediately. The U.N. charter must be restored immediately. The U.N. system must be reformed immediately so that the veto is not the right to die — that there is a fair representation in the Security Council of all regions of the world.

Where Zelenskyy went wrong was in stating that the U.N. charter “must be restored.” The cold, brutal fact is that the lack of U.N. action over Russia’s assault on Ukraine is an example of the charter functioning exactly as intended. The powerful countries that designed the U.N. — primarily the U.S., U.K. and the Soviet Union — structured it to be certain they could always thwart any U.N. action to hold them accountable.

You can read the specific part of the charter that makes the entire organization inherently ineffective — Article 27 — on the U.N.’s own website: “Decisions of the Security Council on [non-procedural] matters shall be made by an affirmative vote of nine members including the concurring votes of the permanent members.”

These are the most significant words in the charter.

The Security Council now has 15 members. As specified by the charter, five are permanent: the United States, Russia (originally the Soviet Union), China (with the seat held until 1971 by Taiwan), France, and the United Kingdom. The other 10 are rotating members, which each serve two-year terms.

As Article 27 says, Security Council resolutions — including the authorization of the use of force — require the votes of nine of the 15 members to pass. But any resolution, no matter how many votes it has in favor, fails if one or more of the five permanent members votes no.

That is exactly what happened on February 25, when a proposed resolution condemning Russia’s attack on Ukraine failed on vote of 11-1. That is, while 11 Security Council members voted yes, one, Russia, voted no. (China abstained, as did two of the rotating members, India and the United Arab Emirates.) During the meeting to consider the resolution, Ukraine’s ambassador to the U.N. recalled all of the claims by Russia’s representative that it had no plans to invade, telling him, “Your words have less value than a hole in a New York pretzel.”

Any normal person would naturally, like Zelenskyy, cry out to the heavens about the injustice of this system. But he’s by no means the first to do so.

The framework of the U.N. was developed in the last years of World War II, once it became clear that the Axis powers would be defeated. President Franklin D. Roosevelt said in a December 1943 radio address that as long as the Allies stuck “together in determination to keep the peace there will be no possibility of an aggressor Nation arising to start another world war.” Roosevelt, with some sincerity, saw a veto for the most powerful victors of the war as a way to preserve a critical unanimity among them. In early 1945 the U.S. and U.K. decided between themselves that the Security Council’s permanent members should each have a veto. Then the Soviet Union agreed immediately afterward at the Yalta Conference in February 1945.

But with Roosevelt’s death that April, his more idealistic perspective quickly deteriorated into standard power politics. When the details of the U.N. were being hammered out at a conference in San Francisco later that year, the five permanent members-to-be thought the veto was a fantastic idea. Other countries were not filled with the same enthusiasm. Debate over it was so vigorous that the room where it took place was dubbed “Madison Square Garden.”

But their objections largely went nowhere: The big powers were prepared to strangle the U.N. in its crib before they would let go of this power. Thomas Connally, a Democratic senator from Texas, was a top U.S. representative in San Francisco. In a speech, he theatrically tore up a copy of the draft of the U.N. charter and proclaimed to the smaller countries, “You may, if you wish, go home from this conference and say that you have defeated the veto. But what will be your answer when you are asked, ‘Where is the charter?’”

Immediately after the U.N.’s creation, a U.S. State Department official named Francis Wilcox wrote a remarkably lucid and honest account of the issue. The veto, Wilcox reported, “reinforced the special position of the permanent members.” Moreover, it “guaranteed them that, through their control of the amending process, their special position could not be changed.” And while for some Americans the veto power “is defective because it would permit Russia, Great Britain, China, and France to block action in the Council … to many of those people its main virtue lies in the fact that it also gives the United States that same veto.”

Still, Wilcox was hopeful. “We should accept [the veto] as a temporary phase in the development of a world organization,” he wrote, “and do our best to make it work. No doubt, as the nations of the world gain experience in working together, the new Organization will be able to adopt more of the methods and techniques of a truly democratic institution.”

The powerful countries that designed the U.N. structured it to be certain they could always thwart any U.N. action to hold them accountable.

The history of the 77 years since then has gone pretty much as you’d expect: The U.N. has provided a valuable forum to allow countries to talk about issues, but on the largest issues of war and peace it’s rarely functioned as anyone interested in peace might hope. Wilcox was wrong — and so was Connally, who, after the U.S. had gotten what it wanted, magnanimously declared, “I am confident that the great powers will not betray the trust that has been placed in them by using their right of veto willfully or maliciously.”

Instead, the U.S. and the Soviet Union/Russia have liberally used their veto power to protect themselves and their client states, especially Israel (for America) and Syria (for Russia). China, France, and the U.K. have also gotten into the act, though more rarely. And there have been many unrecorded vetoes, when resolutions are simply never brought up for a vote because everyone knows that they’ll go down in defeat.

Of course, the countries that are not permanent members of the Security Council — and collectively represent the majority of humanity — have never reconciled themselves to this status quo. A 2007 report from the U.N. General Assembly addressed Zelenskyy’s impassioned perspective — i.e., “The U.N. system must be reformed immediately so that the veto is not the right to die” — in more sedate language. Some countries hopefully suggested that vetoes should not be permitted in “instances such as genocide, war crimes and crimes against humanity” or that a cap should be placed on the number of vetoes the permanent members can use.

But any reform would mean amending the U.N. charter, which requires not just a two-thirds majority in the General Assembly but ratification by all five permanent members. Even if in the unimaginable circumstance of Russia agreeing to change the Security Council veto, the U.S. would never permit that, for the same reasons described by Wilcox in 1945. This has always been the core nightmare of politics: It is extremely hard to establish a monopoly of legitimate force in any area, because the powerful within that area don’t want to give up their own power.

So yes, it’s nice that the U.N. charter says that “the Security Council shall act in accordance with the Purposes and Principles of the United Nations.” But since the U.N.’s founding, small countries have been trampled underfoot by the great powers over and over again, and have gone to the U.N. for help over and over, and have always been left merely with plaintive words:

I regret the divisions that have prevented the Security Council from acting on Ukraine & other threats to peace.

Today I urged its member countries to do everything in their power to end the war and mitigate its impact on the people of Ukraine & beyond. pic.twitter.com/HQp9ktkdIe