Jared Kushner Flaunted His Influence With Saudi Arabia, Russia in Pitch to Investors

Affinity Partners boasts of “accelerating transformation through connectivity” in a slide deck obtained by The Intercept. 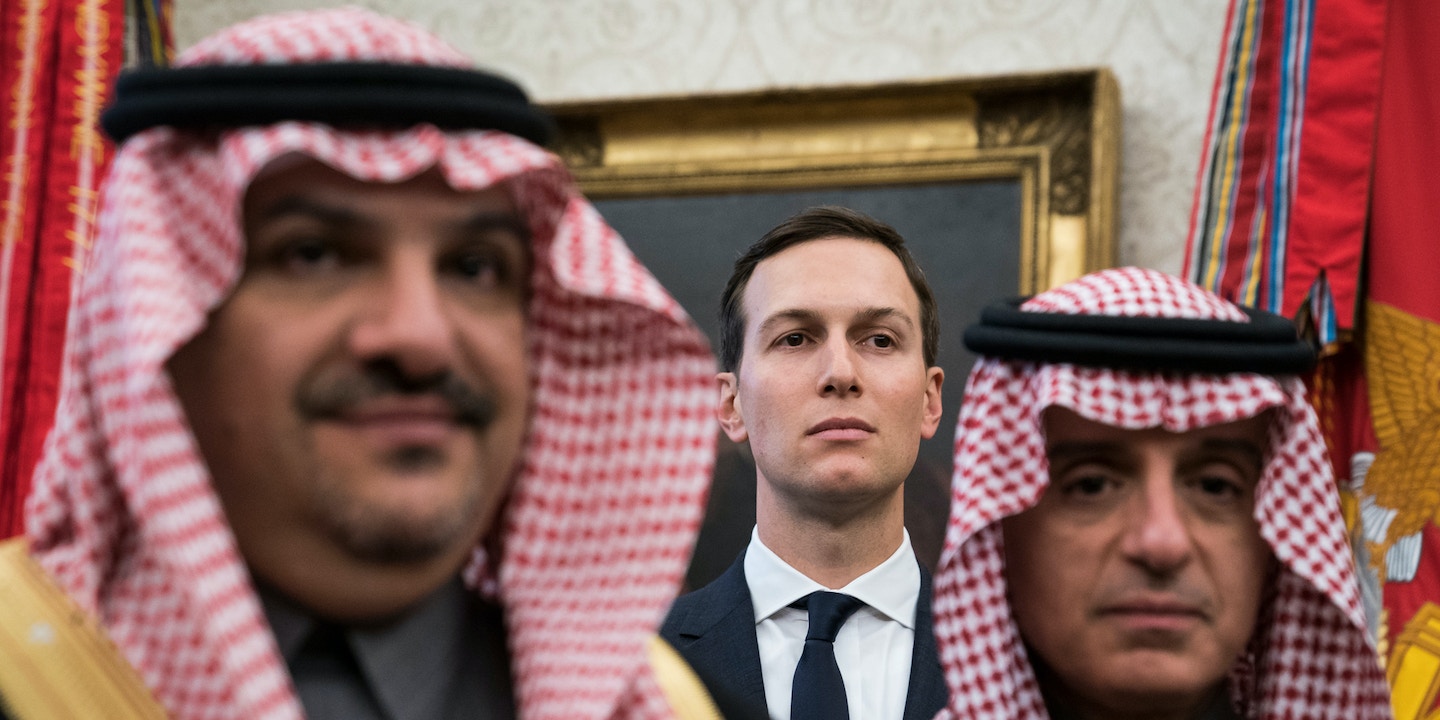 Jared Kushner’s new investment fund, Affinity Partners, nakedly touts the former Trump adviser’s work with Saudi Arabia and his links to several Trump-era deals in the hope of raising money from Wall Street, according to a slide deck for the fund dated from December. Last week, the New York Times reported that Kushner, Donald Trump’s son-in-law, won a $2 billion investment from Saudi Crown Prince Mohammed bin Salman’s investment fund for his own venture, just six months after he departed the White House.

The slide deck confirms the fund’s reliance on Kushner’s government experience and connections, particularly with regard to Saudi Arabia, to gin up business. The pitch to U.S. investors prominently advertises the team’s experience in the Trump White House, including on the Abraham Accords — a series of agreements that normalized formal diplomatic relations between Israel and some Arab countries — and a key oil production agreement reached with OPEC+, the oil cartel led by Russia and Saudi Arabia. “Aligned economic interests can solve intractable problems and create previously unrealized value,” reads one slide in the deck, which is marked “confidential.”

“Affinity’s unique network and experience makes us a differentiated partner for companies navigating the rapidly evolving global political and economic environment,” reads another. Affinity’s “value add” is depicted as a two-way arrow between “strategic partners/investors” and “target companies/operating businesses.”

The slides describe Kushner as “leading the negotiations on the historic OPEC+ oil agreement in April 2020 among the United States, Saudi Arabia, and Russia, which led to the largest oil production reductions in history as the Covid-19 economic crisis shocked global demand for the commodity.” Beyond smacking of revolving door politics, the reference to the agreement seems to hint at Kushner’s influence with the oil-rich Saudi kingdom. He traveled to the region earlier this year, meeting with Crown Prince Mohammed as well as the CEO of Aramco, Saudi’s national oil company.

It also contrasts sharply with U.S.-Saudi relations under President Joe Biden, who amid skyrocketing gas prices has repeatedly asked Riyadh to increase oil production to no avail. Saudi-Russia collusion to keep the global oil supply low has sent U.S. gas prices soaring to their highest levels in years, as the Intercept has previously reported. This has generated a bonanza of profits for Russia during its costly invasion of Ukraine, as well as punishing inflationary pressures in the U.S. Despite repeated entreaties from Biden for the Saudis to increase oil production, they’ve refused to budge. That’s unlikely to change. “Saudi has been very clear that it’s not increasing production,” Ellen Wald, a nonresident senior fellow at the Atlantic Council, told The Intercept. Riyadh wasn’t always so intransigent. In two election years — 2018 and 2020 — Saudi Arabia complied with then-President Donald Trump’s requests to increase and decrease production, respectively.

A spokesperson for Kushner denied there was anything untoward about Affinity’s pitch. “Jared was very successful in the private sector before he entered government, achieved great success in government, and many are confident he will enjoy continued success in his new venture,” the spokesperson told The Intercept in a statement. “Jared’s track record in government was unprecedented. His leadership and efforts led to the historic Abraham Accords, the [U.S.–Mexico–Canada Agreement] which was the largest trade deal in history, life changing criminal justice reform, Operation Warp Speed among many other achievements.”

The slides make repeated reference to Affinity’s “network,” which includes a bevy of Trump administration appointees depicted in a “Team Members” section. The pitch is light on details of the actual product, with business pablum peppered throughout: “Accelerating transformation through connectivity,” the slide deck begins.

A source in contact with multiple U.S. investors approached by Affinity said the investors were not attracted by the presentation and described their shock at how cavalierly it seemed to suggest influence peddling, a “value add” often handled with more subtlety in the investment world. “They said they’d never seen such a joke of a deck, openly talking about ‘networking’ and ‘networks’ — i.e., our corrupt insider contacts,” the source said on condition of anonymity to describe private discussions. “They’re bragging about ‘networks,’ they’re using cliches, with no serious investment discussion.”

Prior to the Saudi investment in Affinity, the Times reported, officials in the kingdom raised concerns about Affinity’s lack of experience in private equity, and the unsatisfactory results of due diligence reviews. They were also curious as to why the company didn’t yet have U.S. investors, which Saudi staff wrote was because “The Affinity principal would like to avoid media attention at this time.” According to the Times, documents “indicate that at this point Mr. Kushner’s venture depends primarily on the Saudi money.”

“Team Members” listed in the deck who served in the Trump administration include Avi Berkowitz, who served as an adviser to Kushner and helped with negotiations on the Abraham Accords, as well as retired two-star Gen. Miguel Correa, who served on Trump’s National Security Council. Correa, whose close ties to the leadership of the United Arab Emirates have been credited with helping to negotiate the accords, is also a team member in the Global Research and Geoeconomics division. (Correa even coined the phrase “Abraham Accords.”)