The listing of the IRGC as a foreign terror group has emerged as the central obstacle blocking a new Iran nuclear deal. 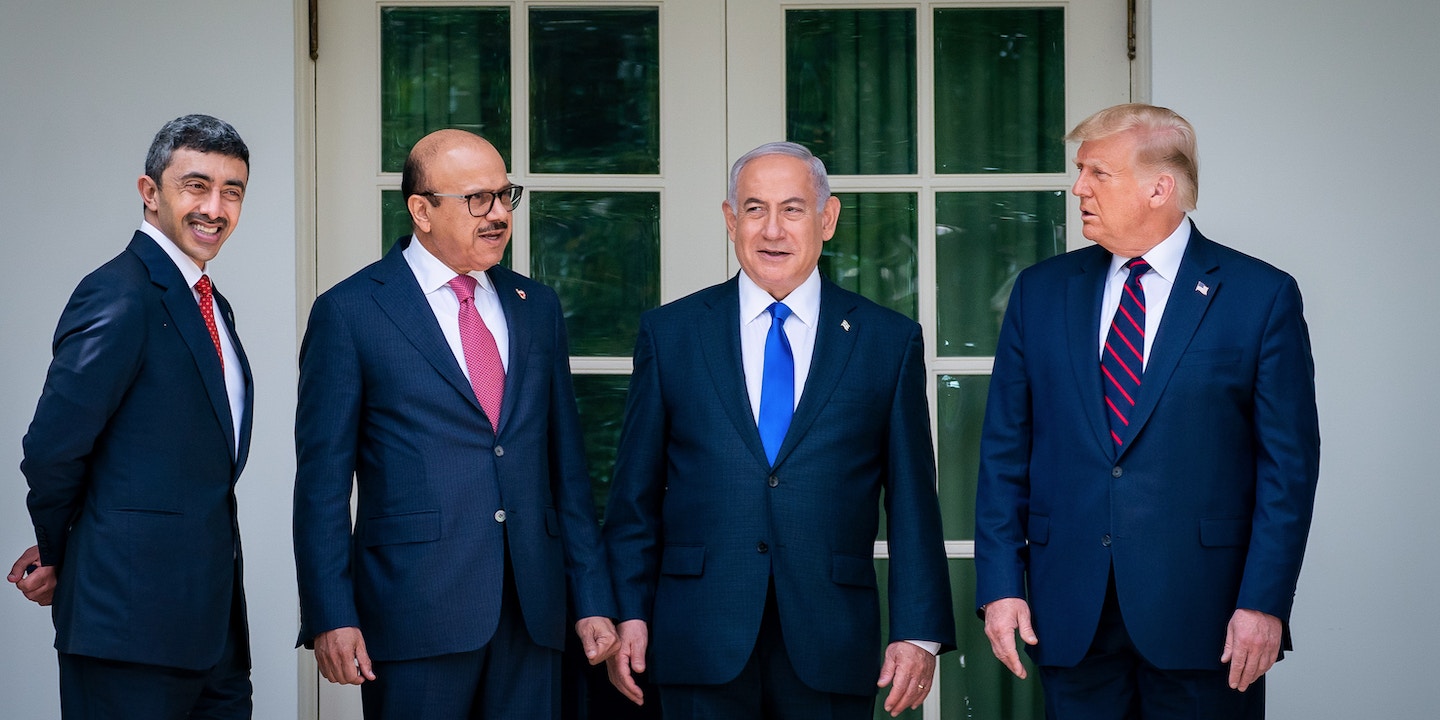 In 2019, the Trump administration took the controversial step of listing the Islamic Revolutionary Guard Corps, an ideological branch of the Iranian military, as a foreign terrorist organization. The designation, an apparent poison pill to block further diplomacy with Iran, has become a major obstacle in negotiations to revive the nuclear deal with Iran, which Trump abrogated in 2018.

Though the domestic political pressure on the Biden administration against delisting has been widely discussed — with fears of Republicans campaigning against the move and pro-Israel forces roundly opposing it — few have noted the effect and breadth of the campaign to place and keep the IRGC on the terror rolls.

Documents, including rafts of public disclosure filings and a hacked email from a Washington diplomat, reveal a highly active foreign influence operation over the past five years to blanket Washington with messages supporting confrontation with Iran and targeting the IRGC with sanctions and inclusion on the terrorist list.

Since at least 2015, a variety of communications consultants, law firms, and lobbyists working for foreign governments — primarily Iranian regional rivals Saudi Arabia, the United Arab Emirates, and Bahrain — produced a steady stream of tweets, talking points, press releases, and reports warning about the dangers of the IRGC and supporting the foreign terrorist organization, or FTO, designation.

“We should not be allowing foreign government lobbyists to buy influence on important national security policies.”

“All you need to know about what a politicized cudgel the FTO list has become is seeing the UAE and Saudi Arabia — responsible for some of the most heinous terror against civilians in Yemen — lobbying to get the IRGC on the FTO and keep them listed,” said Sarah Leah Whitson, executive director of the advocacy group Democracy for the Arab World Now. “We should not be allowing foreign government lobbyists to buy influence on important national security policies, like the FTO designation of a government we want to reach a critical nuclear deal with.”

The previously unreported hacked email sent by a UAE diplomat lays bare an attempt by a foreign interest to influence the U.S. government’s approach to the IRGC. In the email, drawn from a trove released in 2017 by a group calling itself Global Leaks, UAE Ambassador to the U.S. Yousef al-Otaiba, one of the most influential foreign diplomats in Washington, messages with a reporter about the listing. The email released by Global Leaks shows that then-Wall Street Journal reporter Jay Solomon wrote to Otaiba on February 3, 2017, asking: “You hear anything about the [Trump] administration considering designating the IRGC as a terrorist organization?”

In the email chain, Otaiba responded within minutes: “No idea where they are on decision making, but I have made the suggestion to several people.”

The UAE Embassy did not respond to a request comment on the purported email, which Responsible Statecraft and The Intercept were unable to separately authenticate. Otaiba never specified in the exchange who he “made the suggestion to.” At the same time as the Global Leaks exchange between Otaiba and Solomon, an army of paid agents for the UAE, Saudi Arabia, Bahrain, and the Iranian dissident group Mojahedin-e Khalq, or MEK, were bombarding congressional staffers, think tanks, and the State Department with messages emphasizing the dangers of the IRGC.

On February 14, 2017, the National Council of Resistance of Iran — the political wing of the Mojahedin-e Khalq, a group with little support inside Iran but has close ties with Saudi and Israeli intelligence agencies — held a press conference about the IRGC’s “terrorist training centers” and held a March 8, 2017 “panel discussion on the rise of the IRGC financial empire.”

Between February and May 2017, the group’s U.S. leadership acted as sources regarding the IRGC for a host of outlets mostly on the right but also including mainstream outlets like the Associated Press, according to National Council of Resistance of Iran’s disclosure under the Foreign Agent Registration Act, a law requiring agents of foreign principals to periodically report on their activities.

Other Gulf rivals of Iran were also paying communications firms and lobbyists to circulate reports and white papers denouncing the IRGC, according to disclosures. In May 2017, Qorvis Communications, working on behalf of Saudi Arabia, circulated a “summary: counterterrorism white paper” about “Saudi Arabia and counterterrorism” that repeatedly referred to the IRGC’s backing of Houthi rebels who the Saudis and UAE were fighting in Yemen. (None of the registered foreign agents in this article responded to requests for comment.)

Another communications firm representing Saudi Arabia, Brownstein Hyatt Farber Schreck, circulated a “fact sheet” defending the Saudi war effort in Yemen — which has been denounced by human rights advocates — as well as a report claiming that the “insurgency against Yemen’s central government has been aided by the financial and operational support of Iran’s Islamic Revolutionary Guard Corps (IRGC) and Lebanon’s Hezbollah militia.”

The steady drumbeat of IRGC-related informational materials from UAE, Bahrain, and Saudi Arabia continued with the Trump administration’s 2017 imposition of sanctions on the IRGC, a move welcomed by foreign agents in Washington.

The Trump administration’s “maximum pressure” policy put a particular emphasis on targeting the IRGC. The hawkish approach culminated in the 2018 U.S. abrogation of the Iran nuclear deal, the 2019 listing of the IRGC as a terror group, and the early 2020 assassination of IRGC commander Qassim Suleimani. Throughout it all, “maximum pressure” won praise from the UAE, Saudi Arabia and Israel.

The federal filings that individuals and groups representing foreign interests made reflected the intensity of advocacy on the issue. The informational forms disclosing communications and materials distributed by foreign agents working for the UAE, Saudi Arabia, Bahrain, and the MEK’s political wing contained 325 mentions of the IRGC between 2017 and 2020.

The lucrative foreign influence campaign has continued into the post-Trump, post-“maximum pressure” era.

In June 2021, Saudi agents at Tripp Baird’s Off Hill Strategies sent 23 Hill staffers a tweet from Blinken declaring, “Today, we designated a network of front companies and intermediaries that support the Houthis in coordination with the IRGC-QF” — a reference to the Yemeni rebel group and the IRGC’s clandestine operations branch, the Quds Force.

Following the Biden administration’s February delisting of the Houthis from the foreign terror organization list, Emirati agents circulated a report by the UAE embassy on “Returning the Houthis to the U.S. terrorist list,” citing the rebels’ alleged close ties to the IRGC.

The pace of Foreign Agents Registration Act-disclosed activity by foreign agents for UAE, Saudi Arabia, Bahrain, and the MEK’s political wing appears to have slowed as the Biden administration pushed to reenter the nuclear deal. The shift came at the same time as tensions grew between the White House and Gulf states on a variety of issues ranging from OPEC oil output to sanctions against Russia in the wake of Moscow’s invasion of Ukraine.

At least one entity with financial links to the UAE and Saudi Arabia — though not a registered foreign agent — is already pushing back on the potential delisting of the IRGC. The Middle East Institute, a Washington think tank “dedicated solely to the study of the Middle East,” whose largest donor is the UAE Embassy and also receives support from Saudi Aramco, published a report this month concluding:

As the U.S. administration assesses whether to delist the IRGC as an FTO, the nature of the Guard reveals that it is not a conventional state armed force and should not be treated as such. The IRGC is an ideological organization that shares key characteristics with other designated Islamist organizations, including its quest for an expansionist Islamic state, a global Islamic order, forceful imposition of sharia law (Shi’a interpretation), militaristic concept of jihad, and anti-American and anti-Semitic ideology.

In a statement, MEI media relations manager Rachel Dooley said donations do not affect the group’s work. “MEI retains full intellectual independence for itself and its scholars, and no funder has any editorial say, nor are any funders consulted in the authoring and/or publishing of any articles, including this one,” Dooley said. “The authors produced this article independently and pitched it to the Middle East Institute, which publishes a wide range of voices and perspectives on regional policy and affairs. The article was accepted after passing MEI’s internal review and fact-checking process. As is the case for all of MEI’s publications, the views in the piece are the authors’ own and do not represent a position of the Institute.”

MEI discloses its donors on its website but does not disclose the potential conflict of interests in MEI materials that touch on its foreign government funders.

For now, the pressure campaign against the IRGC in Washington appears to be winning out. The U.S. has so far ruled out delisting the group without further concessions from Iran. The Iranians say such a position is at odds with the agreement that was struck in 2015 because it asks for more concessions from Iran to win the economic relief the country already bargained to get.

Nonetheless, the very discussion of the potential delisting of the IRGC is a threat to a central achievement of the “maximum pressure” campaign praised by the Gulf states and the MEK. If a deal to delist the IRGC suddenly seems more likely, their registered agents in Washington are sure to ramp up their campaign again.