Yousef Al Otaiba, the UAE’s ambassador to the U.S., was key in marketing Mohammed bin Salman as a reformer to Washington’s foreign policy establishment. The man in Washington most responsible for elevating Mohammed bin Salman to the position of crown prince of Saudi Arabia has largely escaped scrutiny in the wake of the murder and dismemberment of Washington Post columnist Jamal Khashoggi.

And on Tuesday, life goes on as normal for United Arab Emirates Ambassador Yousef Al Otaiba, the diplomat who lobbied Washington heavily to support the crown prince’s internal efforts to disrupt the line of ascension and put himself next in line for the throne. When MBS — as the crown prince is known — was given his title in June 2017, and as he went on a ruthless power grab in the months that followed, the Washington foreign policy establishment nodded along and touted him as a reformer.

Otaiba, according to an invitation obtained by The Intercept, will be hosting a dinner party Tuesday night for former Obama administration Commerce Secretary Penny Pritzker at his Virginia mansion. The invite identifies Pritzker by her current role as chair of the Carnegie Endowment for International Peace. 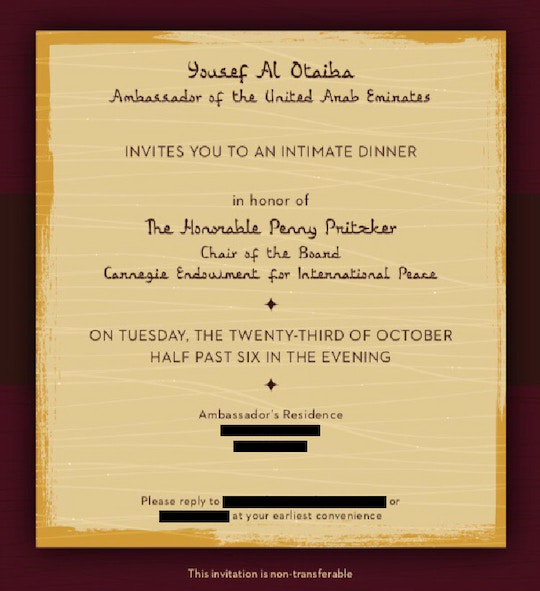 A screenshot of the invitation to Yousef Al Otaiba’s dinner party. Some personal information has been redacted for privacy.

Otaiba’s dinner parties are a thing of legend in the Washington social scene, occasionally prepared by Wolfgang Puck himself. The exclusive events are part of the UAE’s strategy to buy influence in Washington, by assiduously flattering and pampering the most influential members of the elite. Otaiba, beginning in 2015, used those relationships to smooth the path for MBS, Saudi Arabia’s defense minister at the time, to eventually become crown prince. Otaiba’s boss, Mohammed bin Zayed, had determined that it would be to the UAE’s benefit if MBS seized control from then-Saudi crown prince, Mohammed bin Nayef.

The UAE believed that with MBS in power, the smaller nation would be able to influence the bigger one.

“Our relationship with them is based on strategic depth, shared interests, and most importantly the hope that we could influence them. Not the other way around,” said Otaiba in an email, explaining the strategy behind the UAE’s embrace of MBS.

The email was part of a cache of correspondence stolen from Otaiba’s Hotmail inbox, either by hackers or by somebody with access to the account. The contents were distributed to the media by a group that calls itself Global Leaks, which claims to be made up of independent whistleblowers, though its critics charge that it’s a front for the government of Qatar, which is a rival of the UAE.

Otaiba has been one of the most influential diplomats in Washington, and is treated by many foreign policy hands as a neutral arbiter of Middle East affairs. His endorsement of MBS was crucial to the young prince’s rise; without support in Washington, his move to jump the line in Riyadh would have been impossible.

“Incredible, frankly. Breathtaking vision. And some of it already in execution. If just half materializes, will be extraordinary,” Petraeus emailed Otaiba afterward.

“MBZ shares that exact assessment,” Otaiba replied, referring to the UAE crown prince. “Now you need to convey that to an extremely anxious and wary administration of MBS. I’ve been urging them to invest in him the way we have.”

MBS also met while in Washington in 2015 with Martin Indyk and Stephen Hadley. Indyk, a senior diplomat during both the Clinton and Obama administrations, relayed the conversation to Otaiba. Hadley was a top adviser to former President George W. Bush.

“I think MBS is far more pragmatic than what we hear is saudi public positions,” Otaiba wrote to Indyk on the morning of April 20, 2015.

“I agree on that too. He was quite clear with Steve Hadley and me that he wants out of Yemen and that he’s ok with the US engaging Iran as long as it’s coordinated in advance and the objectives are clear,” Indyk said.

Otaiba responded: “I don’t think we’ll ever see a more pragmatic leader in that country. Which is why engaging with them is so important and will yield the most results we can ever get out of saudi.”

MBS’s signature policy is the three-year Saudi- and UAE-led military intervention in Yemen, which is aimed at defeating a rebel group in North Yemen and restoring the country’s former president to power. Obama administration officials initially expected the intervention — which started in March 2015 — to last only a few weeks, but three years later, the coalition’s forces are engaged in a costly quagmire.

Meanwhile, the intervention is contributing to the world’s largest humanitarian crisis, with millions of people on the brink of starvation and a cholera epidemic that has infected 1 million people. As progress has stalled, various press reports have suggested that Saudi Arabia is looking for a way to exit the conflict, but on terms that allow it to save face.

The day after Indyk and Otaiba emailed about Yemen, the Washington Post’s David Ignatius reached out to Otaiba to share his latest article on MBS. Otaiba, in an email obtained by The Intercept, wrote back:

In the wake of Donald Trump’s election, Otaiba became close with the president’s son-in-law, Jared Kushner, and helped forge what would become a bond between Kushner and MBS. Kushner successfully lobbied to make Saudi Arabia the first foreign country Trump visited. As The Intercept previously reported, MBS later told those close to him that Kushner was “in his pocket” and that Kushner had shared U.S. intelligence related to the Saudi royal family with him, according to three sources who have been in contact with members of the Saudi and Emirati royal families.

Kushner, in a Monday interview with CNN’s Van Jones, dodged a question about whether he believed the Saudis’ widely ridiculed official statement that Khashoggi died in a fist fight with rogue operatives at the Saudi consulate in Istanbul. “With regards to the situation in Saudi Arabia,” Kushner said, “I’d say that right now, as an administration, we’re more in the fact-finding phase.”

In that same interview, Kushner also said that he doesn’t really have much to do with the Middle East.