The Supreme Court is taking away a fundamental bodily right — and condemning pregnant people to financial suffering and possible death. 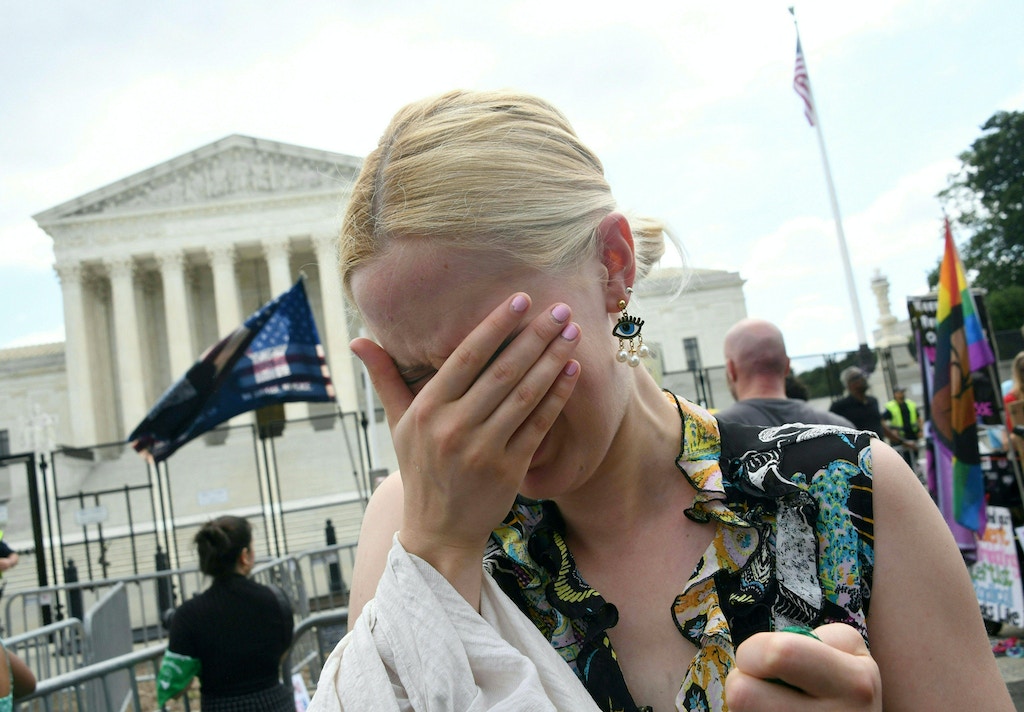 A pro-abortion supporter cries outside the U.S. Supreme Court in Washington, D.C., on June 24, 2022.

In a stunning, if expected, ruling, the Supreme Court overturned Roe v. Wade on Friday, ignoring decades of precedent to deny Americans a fundamental human right. The decision cleared the way for states to outlaw abortion and criminalize those who seek one or help others get them.

Those who aren’t able to get the abortion they want, need, and deserve will see their lives irreparably damaged.

Here’s a stark truth that’s crucial to keep in mind: More pregnant people in those states will die.

Medication abortion is safe and effective, but states have already been working to restrict it. In desperation, many pregnant people in states that ban abortion will still do what they can to obtain one. Abortion won’t disappear, but for many it will become deadly. Even people experiencing pregnancy complications will get caught up and have their lives threatened if doctors refuse to give them the treatment they need, as has happened in countries like Ireland and Poland.

Those who aren’t able to get the abortion they want, need, and deserve will see their lives irreparably damaged.

One researcher’s estimate is that a quarter of those who would have sought and previously been able to get an abortion will instead give birth. They will watch as their life’s dreams slip away. Forced birth will lead to diminished economic prospects and severe destitution for parents and their children.

In the seminal Turnaway Study of women who sought an abortion, despite comparable financial footing, those who were unsuccessful in getting an abortion were three times as likely to wind up living in poverty than those who were successful. They were also more likely to end up unemployed. Years later, people who can’t obtain abortions wind up with more debt and are more likely to have gone bankrupt or been evicted.

Children will suffer too. Legal abortion reduced the number of children living in poverty and improved children’s lives by making it more likely they would graduate college and earn enough to live on. Growing up in poverty, on the other hand, has huge negative effects on children’s education, involvement in the criminal justice system, and lifelong earnings and job potential.

It’s also far more difficult to parent while living in poverty and after carrying an unwanted pregnancy to term. The Turnaway Study found that the mothers who didn’t get abortions reported worse emotional bonding with the children they were forced to bear. Other research has found that legalizing abortion reduced instances of child abuse and neglect.

Access to legal abortion, on the other hand, has, until this point, dramatically changed American women’s economic opportunities. Women who get the abortions they seek are more likely to be able to follow through on their plans for education and careers.

The legalization of abortion after the original Roe decision better enabled women to get higher levels of education, increased their participation in the labor force, boosted their earnings, and upped their ”occupational prestige,” in the words of two economists.

The reasons behind those trends aren’t hard to follow. Being a parent is difficult and expensive, especially in this country. Pregnancy itself is frequently penalized at work. Very few workers are offered paid family leave when their children are born, and there is no guarantee they’ll get paid sick leave when their children fall ill. The cost of child care has risen dramatically in recent decades, and that’s for parents who don’t live in a child care desert and can actually find a spot. Very few children are enrolled in public preschool.

Mothers in particular often fall subject to the motherhood penalty that sees them as less dedicated and competent workers and damages their pay relative to women without children and fathers — just when they need more income to support a family. One paper found that “children impose significantly larger penalties on the career trajectories of women relative to men.”

These outcomes will only be magnified for unwanted pregnancies and forced births.

The ability to control pregnancy and one’s own body is a bedrock right that Americans deserve regardless of the economic outcomes. But it is also true that, as well as denying pregnant people in this country a fundamental bodily right, the Supreme Court and the states that ban abortion are condemning them to financial suffering and possible death.