The Fight for Abortion Rights Turns to State Constitutions

In the wake of Roe v. Wade, providers are challenging abortion bans based on expansive rights protected in state constitutions. 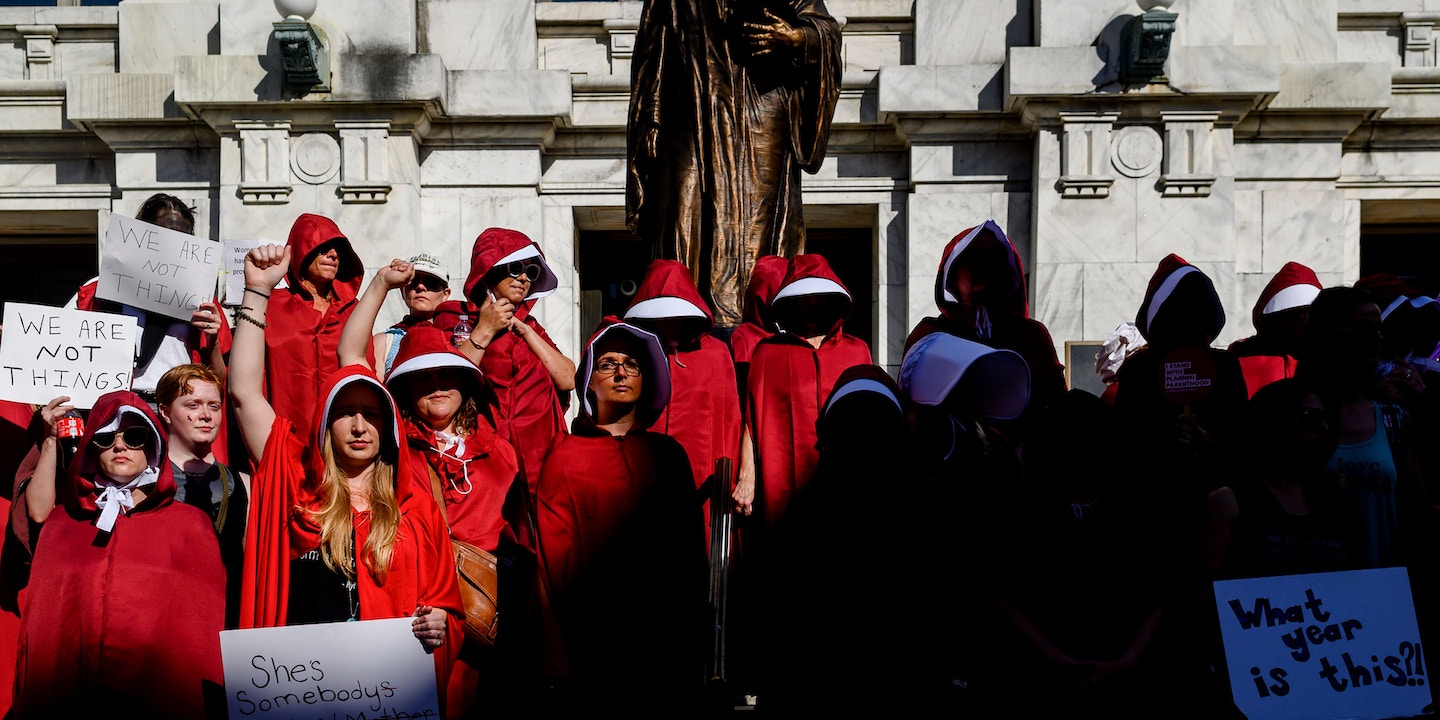 Less than an hour after the U.S. Supreme Court overturned the constitutional protection for abortion, Louisiana Attorney General Jeff Landry crowed on Twitter that abortion was now illegal in the state. “Because of #SCOTUS ruling in #Dobbs, Louisiana’s trigger law banning #abortion is now in effect,” he wrote.

But exactly which trigger law Landry was referencing wasn’t clear. Louisiana has passed several such laws over the years, all of which remain on the books, variously overlap, prohibit different conduct, offer different exceptions, and impose different punishments. In its zeal to ban abortion, Louisiana has created a mess of contradictions.

That prompted the Center for Reproductive Rights to file suit in state court on behalf of several plaintiffs, including Shreveport’s Hope Medical Group for Women, arguing that the bans outlawing abortion in Louisiana violated the state’s constitution. “Louisiana’s rushed and poorly conceived trigger laws are unconstitutionally vague and violate due process,” said Joanna Wright, an attorney with Boies Schiller Flexner LLP and lead counsel on the case. “The Louisiana Constitution does not tolerate such a state of affairs and this lawsuit requires Louisiana to comport with the rule of law as required by its own constitution.”

On June 27, a state judge in New Orleans issued a temporary restraining order that blocked the laws from taking effect pending a hearing slated for July 8, thereby restoring abortion services. “We are committed to this monumental legal challenge,” Kathaleen Pitmann, administrator for the Hope clinic, said in a statement, “to ensure our patients’ wellbeing and so that they may draw strength from our dedication to this fight.”

Louisiana is among 13 states with trigger laws on the books; another nine have ostensibly retained pre-Roe laws banning abortion. Together, they constitute a group of zombie laws that have lain dormant waiting for a Supreme Court decision overturning Roe v. Wade, which the court did on June 24 in the Mississippi case Dobbs v. Jackson Women’s Health Organization. In all, 22 states are poised to ban all or most abortions, while four more will likely try to do so in the coming weeks or months. But many of the states with anti-abortion statutes on the books have multiple, often competing laws, leading to confusion over which of the laws is actually controlling.

Anti-abortion actors have long claimed that overturning Roe — and sending the question of whether individuals should enjoy reproductive freedom back to state politicians — would simplify the legal landscape. But legal scholars say the opposite is true, as The Intercept has previously reported. The lack of a single standard regarding the legality of abortion is unleashing a flood of litigation as restrictions are challenged against individual state constitutions, and competing visions about reproductive freedom give rise to new interstate battles.

By striking down Roe, the Supreme Court gave “a green light to anti-abortion legislators to be as invasive as they possibly can,” said David Cohen, a professor at Drexel University’s Kline School of Law and co-author of “The New Abortion Battleground,” a forthcoming article in the Columbia Law Review. The looming legal fights, he said, will include an increased focus on state constitutional challenges. “People are going to be looking to the state court cases as the places where there can possibly be a win.”

Since the Dobbs ruling, 10 states have announced enforcement of their abortion bans: Alabama, Arkansas, Kentucky, Missouri, Ohio (which has a six-week ban), Oklahoma, South Dakota, Tennessee (also a six-week ban), Texas, and Utah. But just as swiftly came the lawsuits challenging those restrictions. To date, legal challenges in Kentucky, Louisiana, and Utah have been successful — at least for now.

As in Louisiana, Texas’s various laws banning abortion have created a legal quagmire. Abortion access in Texas was already obstructed by the notorious sue-they-neighbor law, Senate Bill 8, which allows private citizens to sue anyone they imagine has violated the state’s six-week ban. Last year lawmakers also passed a trigger ban slated to take effect 30 days after the Supreme Court issues its official judgment in the Dobbs case — a final order that follows the roughly monthlong window during which a litigant can ask the court to reconsider.

In the meantime, however, Texas Attorney General Ken Paxton announced that the state could enforce a pre-Roe ban codified in 1925. In a legal advisory released just after the Dobbs opinion, Paxton encouraged state prosecutors to “immediately pursue” criminal charges against providers based on the old law. “Although these statutes were unenforceable while Roe was on the books, they are still Texas law,” he wrote. “Under these pre-Roe statutes, abortion providers could be criminally liable for providing abortions starting today.”

On June 27, the Center for Reproductive Rights filed suit on behalf of a handful of Texas abortion providers, arguing that the pre-Roe ban had been scrubbed from statute after 1973 and that its provisions conflicted with the newer trigger ban. The pre-Roe ban “cannot be harmonized with the trigger ban,” which establishes “an entirely different and irreconcilable range of penalties for the same offense” and “cannot be enforced consistent with due process,” the lawsuit reads. The following morning, a state judge in Houston issued a temporary restraining order and set a hearing on the matter. Paxton, however, rushed to the all-Republican Texas Supreme Court, which lifted the order on Friday without addressing any of the problems raised in the lower court.

“These laws are confusing, unnecessary, and cruel,” said Marc Hearron, senior counsel at the Center for Reproductive Rights. “Texas’s trigger ban is not scheduled to take effect for another two months, if not longer. This law from nearly 100 years ago is banning essential health care prematurely, despite clearly being long repealed.”

Many states have multiple, competing abortion bans on the books, leading to confusion over which of the laws is actually controlling.

According to the Guttmacher Institute, only four states have constitutions that explicitly do not protect abortion rights. A majority of the first wave of lawsuits seeking to block bans are based on state constitutional protections that lawyers argue are more expansive than those provided in the U.S. Constitution. Lawsuits pending in Idaho, Ohio, and Utah, for example, cite broad privacy rights and liberty interests, arguing that abortion bans discriminate against women and violate equal protection guarantees. A suit in Oklahoma contends that the state’s competing abortion bans violate due process as well as a constitutional “right to personal autonomy and bodily integrity.” The Kentucky lawsuit argues that the state’s two abortion bans (a trigger ban and a six-week ban) violate state constitutional rights of privacy and self-determination.

A suit in Mississippi, meanwhile, filed on behalf of the Jackson Women’s Health Organization, argues that the state’s Supreme Court already concluded in 1998 that the constitution explicitly protected abortion. “As confirmed by the Mississippi Supreme Court … the decision about whether and when to have children belongs to individuals and families, not to the state’s politicians,” said Rob McDuff, a lawyer with the Mississippi Center for Justice, which is among the groups representing the state’s lone abortion provider.

And in Florida, a suit challenging a new 15-week ban notes that in 1980, voters amended the state constitution to provide robust individual privacy rights, which were designed to include the right to abortion; in 2012, voters rejected an attempt to repeal that right. Protecting the right to abortion in Florida is considered crucial to maintaining access in the South.

On Thursday, a state district judge said he would block the law from taking effect. “Florida passed into its constitution an explicit right of privacy that is not contained in the U.S. Constitution,” state judge John Cooper said. “The Florida Supreme Court has determined, in its words, ‘Florida’s privacy provision is clearly implicated in a woman’s decision on whether or not to continue her pregnancy.’” The state is expected to appeal, which could imperil the injunction, said Alexa Kolbi-Molinas, deputy director for reproductive freedom at the American Civil Liberties Union. “But we intend to continue to fight for that injunction to remain in effect at every level of the court system in Florida.”

During a joint press call with the ACLU and Planned Parenthood Federation of America, Nancy Northup, president and CEO of the Center for Reproductive Rights, which argued the Dobbs case, called the Supreme Court’s ruling a “crushing blow” that “upended the idea that a constitutional right is one that can be relied on.” But she noted that the three groups were longtime partners in the fight for reproductive freedom and would continue to press for equal rights. “We were, and are, ready,” she said. And the lawsuits that have been filed so far are just the beginning. “You can expect more cases to be coming,” she promised. “Every additional day and every additional hour that we can block a ban is making a huge difference for the patients in the waiting rooms.”