Alito’s opinion completely elides the significance of the 14th Amendment, which was explicitly designed to address the particular horrors of slavery, including the right of individuals to determine whether, with whom, and when to form a family. 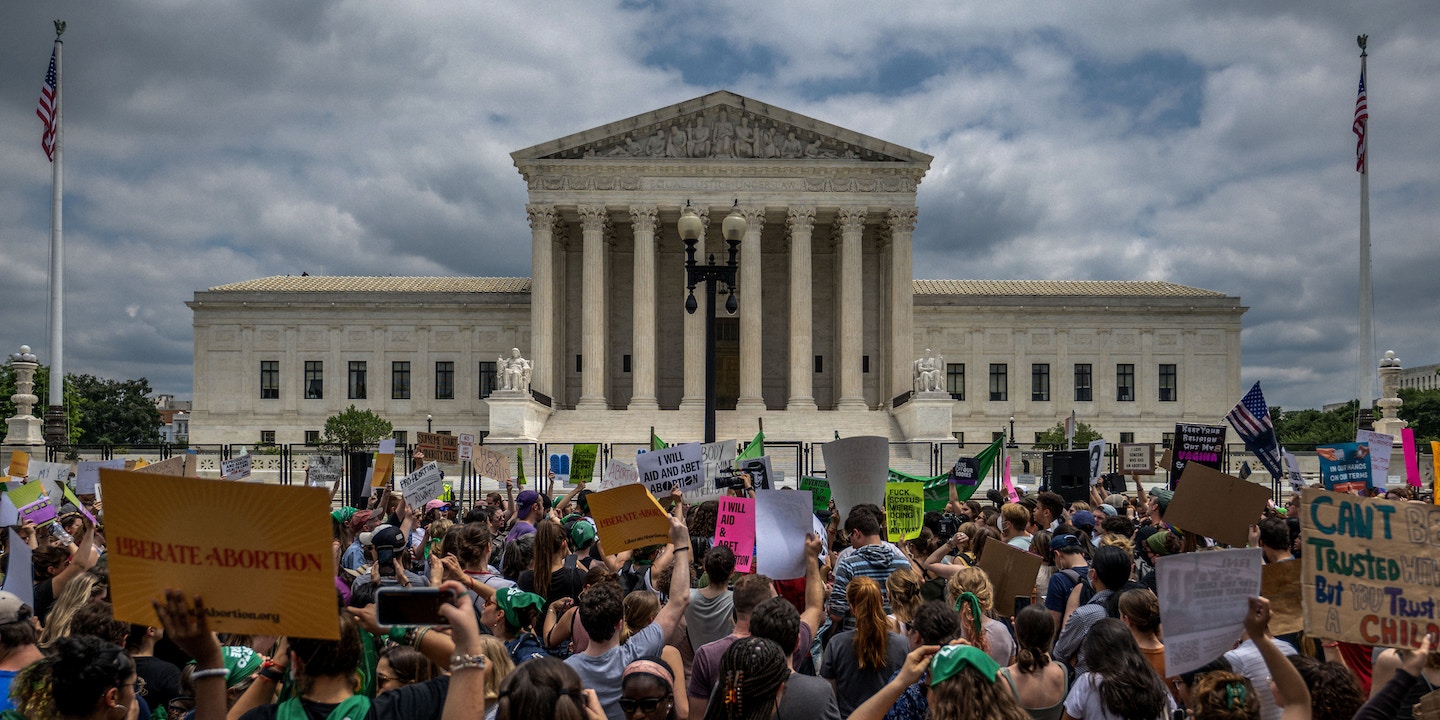 Less than an hour after the U.S. Supreme Court ruled that the Constitution no longer recognizes the right to abortion, and that the decision about whether individuals enjoy reproductive freedom should be decided by individual states, Missouri Attorney General Eric Schmitt was ready.

In a four-page letter sent to the state’s Revisor of Statutes, Schmitt wrote that he was pulling the trigger on the state’s blanket ban on abortion — a law that had been sitting dormant, waiting for Roe v. Wade to fall. “With this attorney general opinion, my Office has effectively ended abortion in Missouri, becoming the first state in the country to do so following the Court’s ruling,” he said in a press release.

During a subsequent press call, Yamelsie Rodríguez, president and CEO of Planned Parenthood of the St. Louis Region and Southwest Missouri, said that the state’s sole remaining abortion clinic had gone dark. “Shortly after the decision came down, we notified the Missouri Department of Health and Senior Services that we are ceasing abortion services in the state of Missouri. We have reached the end of the line for abortion care,” she said. “Today is the worst-case scenario for the 1.3 million people of reproductive age who live in the state of Missouri, where abortion is now banned.”

Indeed, with the fall of Roe, 22 states are poised to ban abortion almost immediately; four other states are expected to follow suit. Thirteen of those states have sleeper, so-called trigger bans on the books, like Missouri, that will now rapidly take effect across a large swath of the country. In all, tens of millions of people of reproductive age will be left without access to abortion.

The court’s consequential ruling in Dobbs v. Jackson Women’s Health Organization represents the culmination of decades of conservative ideological assault on reproductive freedom. And it opens a door for the court’s 6-3 supermajority to strike down a host of other protections grounded in the Constitution’s promise of individual liberty that the court declares in Dobbs are not actually rooted in “history and tradition” — including the right to use contraception, the right to consensual sexual relations, and the right to same-sex marriage.

Still, the text of the majority ruling, authored by Justice Samuel Alito, is not entirely new: The substance of the ruling has not changed since a leaked draft of the opinion was published by Politico in May. As he did in the leaked opinion, Alito goes on at length about how history doesn’t include a right to abortion (notably citing the “great” Sir Matthew Hale, a 17th century judge who sentenced two “witches” to death and advocated for a husband’s right to rape his wife); gives a nod to the ahistorical idea that abortion is akin to eugenics; and seems perplexed by the idea that any reliance interests may have developed around the 50-year-old abortion precedent — in other words, he can’t see how generations of people may have internalized the guarantee that they have the right to plan and control their reproductive lives.

Most consequentially, perhaps, is the majority’s cramped and somewhat confusing view of the individual liberty rights guaranteed by the 14th Amendment. According to the Alito majority, there are two limited categories of rights protected by it: Those specifically mentioned in the first eight amendments — like the (apparently absolute) right to bear arms — and those that comprise “a select list of fundamental rights that are not mentioned anywhere in the Constitution.” And where that select list is concerned, Alito writes that the court must basically determine whether a right was considered as such in 1868, when the 14th Amendment was ratified. He concludes that abortion wasn’t firmly accepted then and so cannot be considered so now.

In fact, Alito’s opinion scoffs at the idea that individual liberty would include a person’s ability to make autonomous intimate personal choices. “While individuals are certainly free to think and to say what they wish about ‘existence,’ ‘meaning,’ the ‘universe,’ and ‘the mystery of human life,’ they are not always free to act in accordance with those thoughts,” he wrote. “These attempts to justify abortion through appeals to a broader right to autonomy and to define one’s ‘concept of existence’ prove too much.” That criteria, “at a high level of generality, could license fundamental rights to illicit drug use, prostitution, and the like,” he wrote.

Alito’s opinion completely elides the significance of the 14th Amendment, a Reconstruction-era addition explicitly designed to address some of the particular horrors of slavery, including ensuring the right of individuals to determine whether, with whom, and when to form a family. “These explicit protections for equality and liberty were written into our national charter at a time when the question of what it truly meant to be free, as a matter of law, was urgent and pressing,” Elizabeth Wydra, president of the Constitutional Accountability Center, said in a statement. “The Fourteenth Amendment provided this measure of equality and more. The Court’s conservative majority — which claims to follow text and history where it leads — instead turns a blind eye to these central precepts at the heart of the Fourteenth Amendment.”

The majority’s position also fails to engage with another obvious point: The 14th Amendment was ratified by white, property-owning men — in other words, women weren’t contemplated as equal under the law. Taking the majority’s logic at face value, that would mostly remain the case.

In their dissent, Justices Stephen Breyer, Sonia Sotomayor, and Elena Kagan grapple with this problem directly and at length. “Of course, ‘people’ did not ratify the Fourteenth Amendment. Men did. So it is perhaps not so surprising that the ratifiers were not perfectly attuned to the importance of reproductive rights for women’s liberty, or for their capacity to participate as equal members of our Nation,” they wrote. “When the majority says that we must read our foundational charter as viewed at the time of ratification (except that we may also check it against the Dark Ages), it consigns women to second-class citizenship.”

The point of a constitutional right is to protect it against “all comers,” the dissent wrote. But by undoing decades of protections for reproductive freedom, the majority has unleashed sweeping changes that will leave individuals vulnerable to the whims of various state politicians. “Under those laws, a woman will have to bear her rapist’s child or a young girl her father’s — no matter if doing so will destroy her life,” the justices wrote. “So too, after today’s ruling, some States may compel women to carry to term a fetus with severe physical anomalies … sure to die within a few years of birth. States may even argue that a prohibition on abortion need make no provision for protecting a woman from risk of death or physical harm,” they continued. “Across a vast array of circumstances, a State will be able to impose its moral choice on a woman and coerce her to give birth to a child.”

“Whatever the exact scope of the coming laws, one result of today’s decision is certain: the curtailment of women’s rights, and of their status as free and equal citizens.”

Unmooring abortion from individual liberty rights also jeopardizes any number of rights similarly understood to have a home in the 14th Amendment, the dissent warns. “The Constitution will, today’s majority holds, provide no shield, despite its guarantees of liberty and equality for all,” they wrote. “And no one should be confident that this majority is done with its work.”

“Whatever the exact scope of the coming laws, one result of today’s decision is certain: the curtailment of women’s rights, and of their status as free and equal citizens.”

Abortion rights rose directly from the right to contraception, as decided in 1965’s Griswold v. Connecticut and its progeny. “In turn, those rights led, more recently, to rights of same-sex intimacy and marriage. They are all part of the same constitutional fabric, protecting autonomous decisionmaking over the most personal of life decisions.”

In the majority opinion, Alito disregards this concern, insisting that none of the other rights are in jeopardy because abortion is different — because it involves potential life — and accusing the dissent of stoking “unfounded fear that our decision will imperil those other rights.” Still, at least part of the majority isn’t signing on to this assurance. In a concurrence, Justice Clarence Thomas wrote explicitly that those other rights should be overturned. While he agreed that the right to contraception, consensual sex, and same-sex marriage weren’t on the table in the Dobbs case, he wrote that they’re actually no different from abortion in that they too have no 14th Amendment protection and thus must go. “No party has asked us to decide ‘whether our entire Fourteenth Amendment jurisprudence must be preserved or revised,’” he wrote. But in the future they should consider the entire class of rights, because any granted on that basis are “demonstrably erroneous,” he wrote, and “we have a duty to ‘correct the error’ established in those precedents.”

During a press call, Julie Rikelman, senior director of litigation at the Center for Reproductive Rights, who argued the Dobbs case before the court on behalf of the Jackson Women’s Health Organization, called the ruling cataclysmic. “The Supreme Court has taken away people’s ability to make basic decisions about their bodies, lives, and health,” she said. “Generations of people have relied on this right, and they’ll now be thrown into a world without it.” It is “the biggest rollback of women’s rights in our history.”