Energy prices, supply chain disruptions, armed conflict, and the lasting effects of the pandemic are creating a perfect storm. 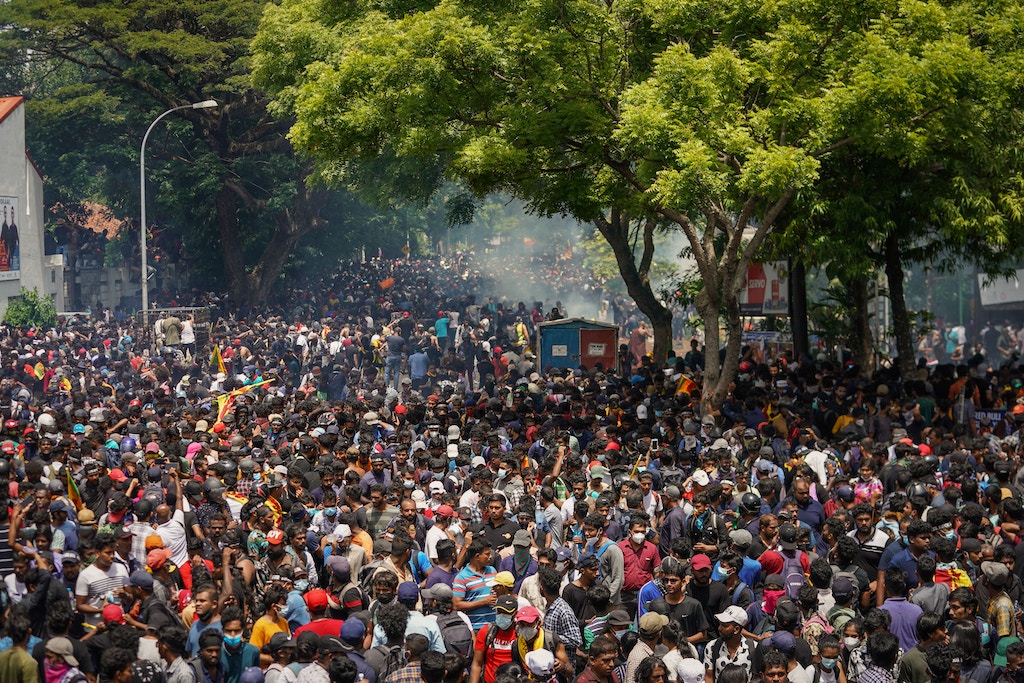 When protesters stormed government buildings in Sri Lanka earlier this month, what we witnessed was less the culmination of a revolutionary process than the collapse of a developing country under economic stress. Sri Lankans were coping with higher food and energy prices for months. Once the government ran out of the foreign exchange reserves necessary to import basic necessities like food and gas, the pressure became too much to bear. The ruling party had mismanaged the economy for years, creating tensions that were exacerbated by the Covid-19 pandemic. What finally pushed Sri Lanka over the edge, though, was the economic shockwaves now being felt from the war in distant Ukraine. All signs suggest that it will not be the last country to fall.

The world is now facing a perfect storm of rising energy prices, supply chain disruptions, and armed conflict — all compounded by the lingering impacts of the pandemic. Despite millions of deaths from disease, the world managed to stave off the worst political crises that were feared when Covid first struck. It looks now like those fears were merely delayed.

“Unlike previous energy crises that were solely about oil, this is a crisis about oil, gas, metal, coal, food, and many other commodities. Any country with high debt and significant exposure to these imports are threatened,” said Robin Mills, a fellow at Columbia University’s Center on Global Energy Policy and the CEO of Qamar Energy. “Some countries will cope and get through it, while other countries will have revolutions and coups. It will be very destabilizing, and I don’t think we’re at the worst of it yet.”

It may not have been widely appreciated before the current war, but Russia and Ukraine are superpowers in food production. The two countries collectively export 12 percent of all calories consumed worldwide, much of it in the form of wheat. Ukraine is the source of roughly 50 percent of all sunflower seed oil used on the global market, and disruptions of its critical exports have sent prices skyrocketing around the world.

A recent agreement signed between the two countries offered some hope that millions of tons of trapped grain could resume being exported to global markets, but almost as soon as the deal was signed, it was called into question by fresh Russian strikes against the port of Odessa. Countries like Egypt, Tunisia, Laos, Ecuador, and Nigeria are just a few that rely heavily on Russian and Ukrainian imports and are now at risk of food insecurity in the year ahead. In Somalia, over 90 percent of wheat is imported from Russian or Ukrainian sources.

“In addition to wheat and gas, Russia is also a big producer of fertilizer which it is going to be unable to export to other major agricultural powers like Brazil,” said Agathe Demarais, global forecasting director of the Economist Intelligence Unit. “Crunch time for food prices will really come next year, where we see elevated fertilizer prices mixed with the impact of heat waves from climate change reducing the size of harvests around the world.” 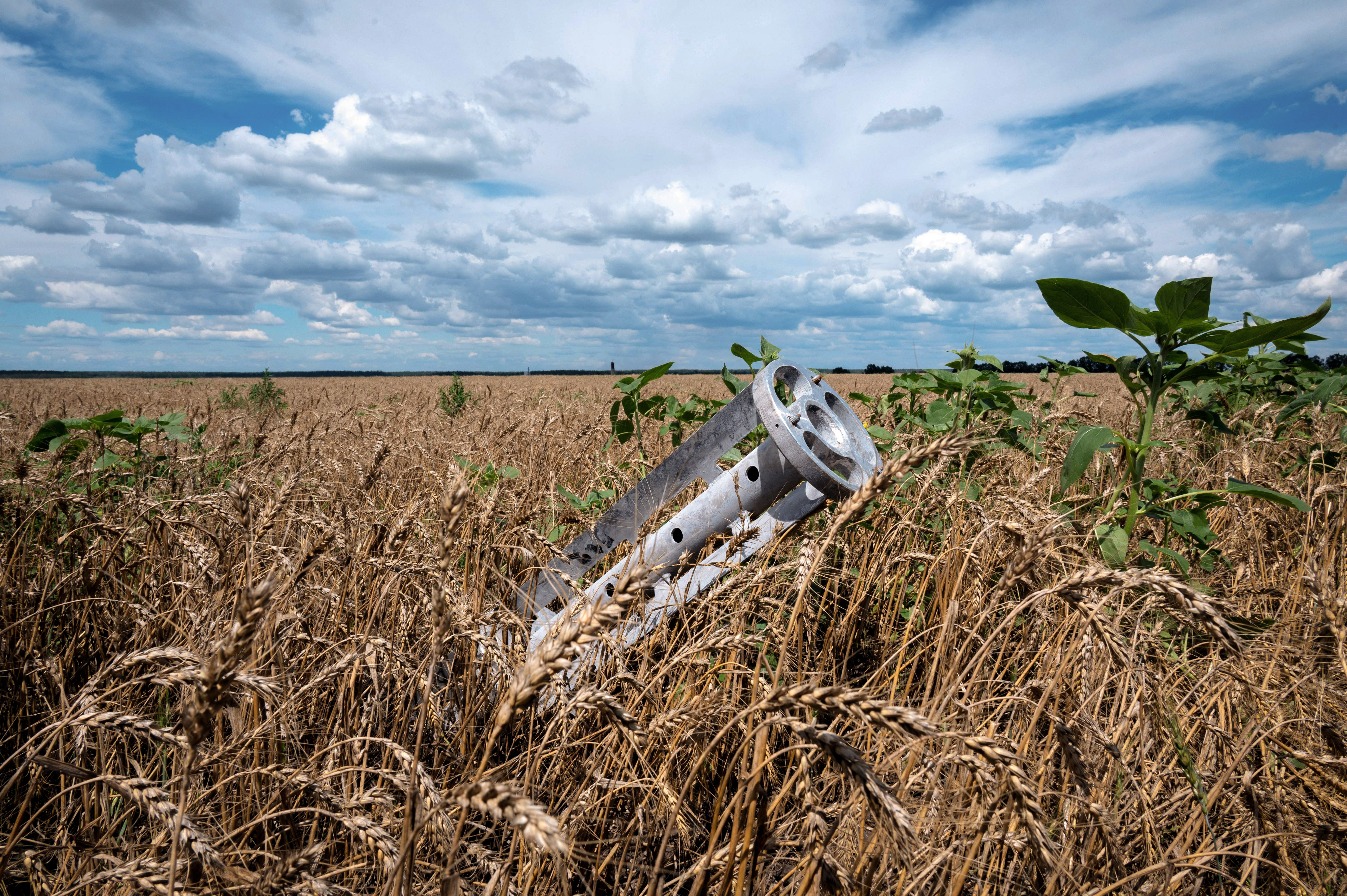 A fragment of a rocket in a wheat field in the Ukrainian Kharkiv region on July 19, 2022.

Bigger price shocks from oil and gas increases are also on the way. Germany is already discussing rationing gas during the coming winter as it struggles to pivot away from Russian supplies, which are helping fund Vladimir Putin’s war machine in Ukraine. Top European Union officials have already begun to warn of “very, very strong conflict and strife” on the continent if shortages continue, while Germany’s Foreign Minister Annalena Baerbock reportedly told her Canadian counterpart that the gas issue could “spark popular uprisings.”

These are undeniably tough times in Europe. The ripple effects on the developing world, however, are even worse. Pakistan is already facing massive rolling blackouts in its major cities after losing access to natural gas imports, as much available supply is being bought up by European countries trying to replace their own shortfalls. A recent $1 billion tender for gas by the Pakistani government received no offers, pushing Pakistan even closer to wholesale economic and political collapse as it struggles with debt and inflation.

The connections between war in Europe and suffering in Asia are crystal clear. “Every molecule of gas that was available in our region has been purchased by Europe because they are trying to reduce their dependence on Russia,” Pakistani State Minister for Petroleum Musadik Malik told the Wall Street Journal in a recent report. The minister’s comments were a grim reflection of the mechanics of global inequality, as well as a harbinger for the suffering that many other developing countries are likely to experience as the crisis rolls onward without remedy.

Optimistic talk about a rising Asian century is all but disappeared. It has given way to grimmer discussions: how to prevent millions of people from falling into famine, and how fragile, heavily-armed states can avoid the ungoverned chaos that rocked many Middle Eastern countries over the past decade.

“A few years ago, there was a lot of attention to the idea that there was going to be a positive economic outlook for Eurasia as an integrated economic zone, connected through different economic mechanisms and infrastructure and that this would in turn benefit poorer countries. Those visions are no longer really viable,” said Esfandyar Batmanghelidj, the founder of Bourse & Bazaar, a think tank focused on economic diplomacy and development in the Middle East and Central Asia. “The consumer markets that everyone thought were going to exist are not going to be there. Big consumer markets like Russian and Iran are going to be squeezed by sanctions, and poor countries in Eurasia are going to be squeezed by higher commodity prices.”

Central banks across the world have responded to price inflation by hiking interest rates on borrowing from their historic lows. The idea behind this strategy is to slow down economic activity in general, thus taking some of the purchasing pressure off commodity prices. This strategy is likely to run into serious challenges. Even if central banks manage to induce a global recession, prices are not likely to fall much as inflation is being driven as much by supply-side pressures as demand.

Armed conflict and political dysfunction are two major culprits here, and the United States has not been helping. Two of the major oil producers in Asia — Russia and Iran — are now effectively blocked from providing energy to global markets by U.S. sanctions. The former was cut off, understandably, as a result of the war in Ukraine, but the latter is banned from providing gas to the market because of the United States’ own decision to violate the terms of the 2015 Iran nuclear deal. Even if other countries around the world were willing to buy Russian and Iranian energy despite concerns over war and nuclear proliferation, few are willing to run the risk of incurring U.S. secondary sanctions that could block them from international banking channels.

Thoughts of building alternative financial channels to do trade, a long-held dream of nations opposed to U.S. hegemony, are also premature: There simply aren’t the legal and administrative mechanisms in place today to build an alternative economic system completely free of Western influence.

The net result of all of this is that — barring an unlikely future where Russia and Ukraine, as well as Iran and the United States, all come to terms peacefully — energy prices are going to continue their upward ascent. The pressures that this creates are likely to push more countries down the path of economic and social collapse that Sri Lanka has already tread.

“Even if we have a global recession and demand comes down, energy prices are likely going to remain elevated because we have two major energy producers off the market. And when energy costs are high, everything else becomes more expensive,” said Batmanghelidj. “Unfortunately, I do believe that we have reached a tipping point. Things are likely to get much worse until a new political reality emerges.”