With Progressives Split, Rep. Josh Gottheimer May Be Gaining a New Ally in Congress

No Labels and a crypto PAC are boosting Joshua Lafazan, a former far-right party nominee, in a Long Island Democratic primary. 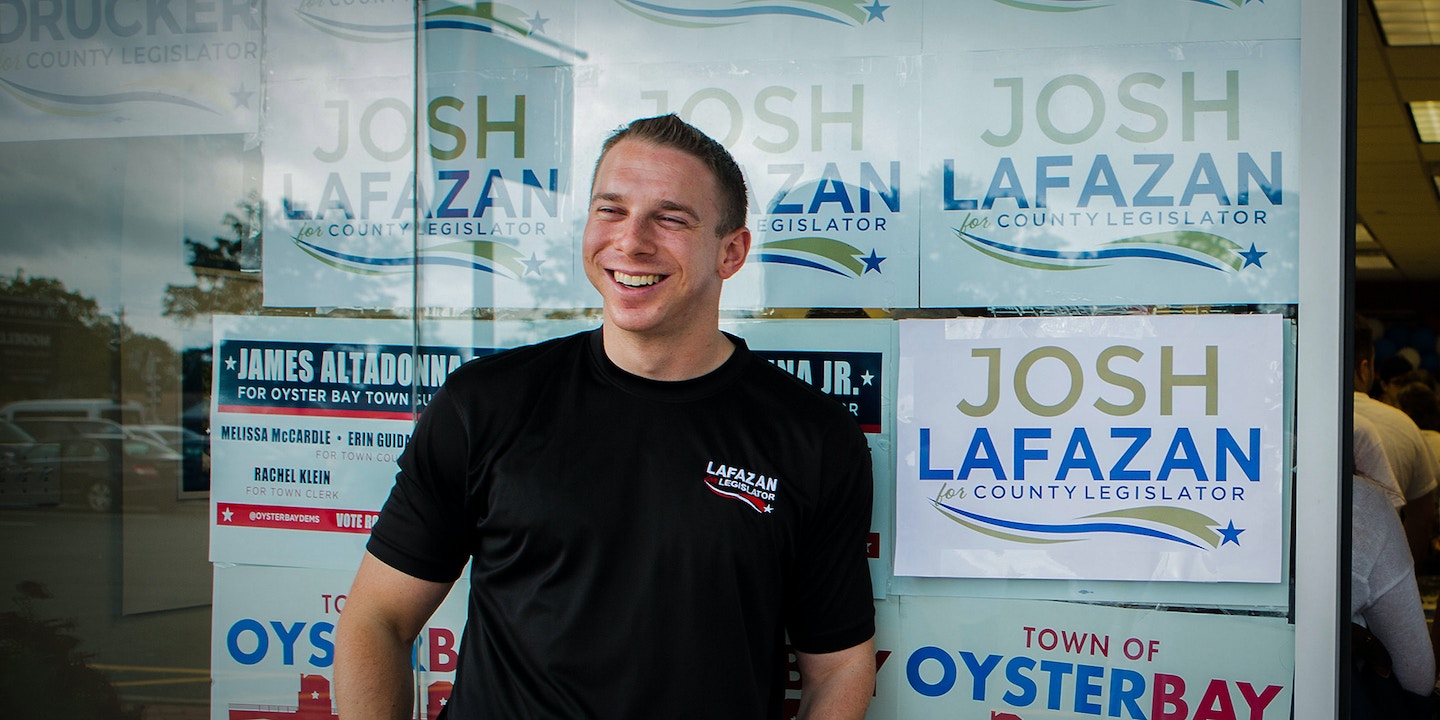 New Jersey Rep. Josh Gottheimer appears set to gain another ally in his ongoing effort to undermine Democratic priorities on taxation and social welfare spending. Absent a rapid consolidation by progressive elements in the district, that ally, Long Island congressional candidate Joshua Lafazan, appears increasingly likely to win a hotly contested primary, where he has benefited from a fractured field, a lack of attention to his controversial record, and the last-minute support of a super PAC with ties to crypto interests.

Cryptocurrency billionaire Sam Bankman-Fried is spending over half a million dollars through his political action committee aimed at pandemic prevention, Protect Our Future, to boost Lafazan in the run-up to the New York Democratic primary on Tuesday. The support from cryptocurrency interests, which Lafazan appears to have actively courted during his campaign and time in the Nassau County Legislature, gives him a financial advantage over a crowded field vying to replace retiring representative and failed gubernatorial candidate Tom Suozzi.

Voters in the 3rd District have a history of electing corporate-friendly Democrats. Suozzi, who has endorsed Lafazan, is considered one of the staunchest defenders of business interests in the caucus. But while Suozzi is a reliable defender of key Democratic priorities like firearm regulation, abortion rights, and LGBTQ+ protections, Lafazan’s history suggests there are few, if any, issues he is unwilling to compromise on in order to secure elected office.

That Lafazan has not rejected the sizable outside support raises further questions about his independence from corporate interests and conservative activists who have supported his prior runs for public office. Lafazan, who registered as a Democrat in order to run for Congress last year, has accepted the ballot line of a far-right New York political party in his last two runs for office and has long touted his close relationships with local business interests — including a recent endorsement from corporate interest group No Labels, which worked to halt the passage of President Joe Biden’s domestic agenda last year. Lafazan, who is presenting himself as a mainstream Democrat in his campaign’s political advertisements, did not respond to multiple requests to comment for this story.

Lafazan’s apparent public auditioning for support from crypto kings began in March, when he self-published an op-ed extolling the technology’s virtues. In it, he drew attention to legislation he introduced in the county legislature to create a task force charged with “exploring how crypto can help bolster Nassau’s economy” and determining ways to attract crypto businesses to the county. That op-ed was followed by an announcement in June that his campaign would accept donations made via cryptocurrency, though it is unclear whether any donors have actually chosen to utilize the option.

Please see my Op Ed submitted to the Syosset Advance titled “Time for Nassau to get Serious About Crypto” pic.twitter.com/COx6pUFQbR

Lafazan’s embrace of cryptocurrency interests is the latest episode in a political career marked by high-profile appeals to powerful interest groups. That record includes a questionable relationship with a local billionaire couple who provided a loan to Lafazan for college tuition while he pursued political office — a relationship that is now the subject of a Federal Election Commission complaint by one of Lafazan’s opponents.

Lafazan’s political career started before he received his high school degree. As a senior, he ran for and won a seat on the Syosset County Board of Education in 2012, becoming the youngest elected officeholder in the state of New York. After reelection to another term in 2015, Lafazan rode the wave of anti-Trump sentiment to a seat in the Nassau County Legislature by defeating Republican incumbent Donald MacKenzie in 2017.

During his reelection bids in 2019 and 2021, Lafazan, who caucuses with the Democrats in the Naussau County Legislature, accepted the ballot line of the far-right Conservative Party, which touts extremist stances against gun control, abortion rights, criminal justice reforms, and a host of other issues. While Lafazan has distanced himself from the progressive Working Families Party, on whose ballot line he has also appeared, he defended his association with the Conservative Party earlier this year, telling local outlet City & State New York that “the Conservative Party’s two biggest priorities were taxes and substance abuse — and they happen to agree with me on both of those issues.” His continued alignment with the party’s stances on taxes in particular signals that he is likely to continue courting corporate interests while in Congress.

Lafazan put even more distance between himself and the Democratic base following the uprisings over the murder of George Floyd. After declaring to a crowd of protesters that “institutional racism is alive and well in this country, and in 2020, racism is alive and well in this county,” Lafazan appeared to then reverse his position and curry favor with local police unions by supporting staunchly pro-police legislation that that sought to make law enforcement officers into a protected class and restrict bystanders’ ability to record police interactions the following year.

Local leaders, including the NAACP’s Long Island Regional Director Tracey Edwards, condemned Lafazan’s apparent opportunism in stark terms at a hearing for that legislation in August 2021. After recounting Lafazan’s words to Black Lives Matter protesters, Edwards expressed disbelief at Lafazan’s turnaround. “Which legislator are you?” she asked repeatedly.

Despite the considerable blemishes on Lafazan’s record, mainstream and progressive Democrats in the district appear poised to enable his election by failing to coalesce behind one of the three other candidates competing for the seat: Suffolk County Deputy Executive Jon Kaiman, Democratic National Committee member Robert Zimmerman, and progressive activist Melanie D’Arrigo.

No challenger is emerging as an ideal candidate to consolidate behind and overcome Lafazan, who has raised over $1.6 million in addition to his support from special interests. There is no public polling available to indicate which candidates are competitive, but fundraising records and endorsements indicate a two-man race between Lafazan and Zimmerman.

While D’Arrigo is the favorite of progressive organizations — she has the endorsement of the Working Families Party — her FEC reports indicate that she is entering the final leg of the race with less than $30,000 on hand — an amount far short of the resources necessary to mount a serious campaign. Kaiman, a moderate Democrat who entered the final stretch of the race with almost $200,000 on hand, has also lagged far beyond Lafazan in fundraising, bringing in only $600,000 over the course of the campaign. Zimmerman, who has never held an elected office, has managed to keep pace with Lafazan by raising $1.4 million, and his campaign began August with nearly half-a-million dollars on hand.

Despite holding elected office for the entirety of his adult life and his consistent appeals to conservative voters and business interests, Lafazan has deftly moved to position himself as an outsider with mainstream liberal positions in his bid for the Democratic nomination. In a recent campaign advertisement, he ignores D’Arrigo’s candidacy and alleges that Kaiman and Zimmerman are “career political insiders,” and emphasizes his support for gun reform and abortion rights.

Zimmerman’s campaign manager, Evan Chernack, told The Intercept that their campaign is uniquely poised to consolidate the anti-Lafazan vote because his support comes from efforts to appeal to all corners of the party. While he has close relationships with the Democratic establishment, Zimmerman supports progressive priorities like Medicare for All and a Green New Deal. “Robert is the only candidate in the race with overwhelming support from progressive activists, labor groups like the AFL-CIO and current and former party leaders like Hillary Clinton,” Chernack said.