The Republican senator from Wisconsin won’t say why he agreed to hand fake slates of electors to then-Vice President Mike Pence on January 6, 2021. 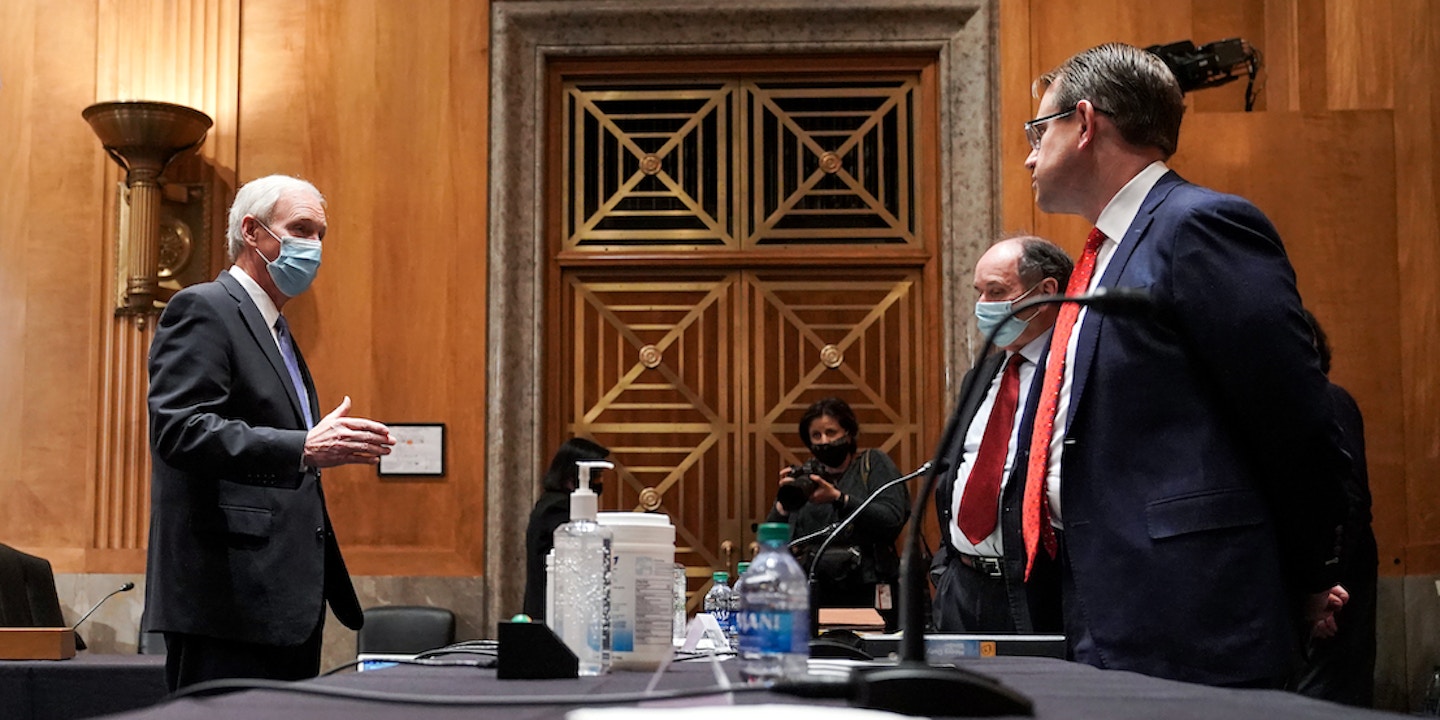 On the campaign trail in Wisconsin last week, Sen. Ron Johnson, the Republican incumbent, acknowledged but attempted to downplay his role in a plot to overthrow American democracy on January 6, 2021.

Asked by Matt Smith of WISN-TV Milwaukee if he would be willing to testify to the House committee investigating the attack on the Capitol, Johnson argued that he had spent only “a couple seconds” that day furthering a scheme to keep the defeated president, Donald Trump, in office by falsifying Electoral College results.

"What would they ask me to testify about?" Johnson said on UPFRONT when asked if he would testify before the Jan. 6th committee about Wisconsin's slate of false Republican electors. "My involvement in that attempt to deliver spanned the course of a couple seconds." pic.twitter.com/42jXN82YQh

As he struggled to minimize his role in the plot by Republican operatives in Wisconsin to submit a slate of electors who would ignore Trump’s defeat at the ballot box, Johnson appeared to contradict himself multiple times in the interview. Moments after telling Smith that he “had nothing to do with the alternate slate,” the senator admitted that he had, in fact, sent text messages on January 6 to connect his chief of staff with a lawyer for the Trump campaign in Wisconsin who wanted Johnson to hand-deliver fabricated electoral votes for Trump to then-Vice President Mike Pence.

As text messages released by the January 6 committee in June showed, the scheme quickly fizzled because an aide to Pence told Johnson’s chief of staff that the vice president would not accept the fake electoral votes from the senator. Since then, whenever he has been asked why he agreed to facilitate the plot, Johnson has drawn attention to how quickly it failed, as if that somehow exonerated him. A Jan. 6, 2021, text exchange between Sen. Ron Johnson’s chief of staff and an aide to then-Vice President Mike Pence is revealed by the House January 6 committee at a hearing in June.

“My involvement in that attempt to deliver spanned the course of a couple seconds. I got — I think I fielded three texts and sent two,” Johnson told Smith. “I had virtually no involvement. Literally, my involvement lasted seconds.”

Johnson refused to explain why he had agreed to act as a go-between with Pence for Jim Troupis, the Trump campaign lawyer in Wisconsin who wanted the fake electors for Trump from Wisconsin and Michigan to be counted instead of those for Biden, who had been elected by the popular vote in those two states.

Johnson’s frequently hapless efforts to evade direct questions about his role in the plot began with outright falsehoods in June, when the text exchange between his chief of staff and the Pence aide on January 6 was projected on a big screen during a hearing of the House select committee.

“Do not give that to him,” Pence aide responded. https://t.co/OO4aRea0h7 pic.twitter.com/SWOcQQ0i9D

Pressed by reporters that day to explain what his role had been, Johnson tried to dodge questions by pretending to be on the phone and then falsely said that he had no idea who had passed the fake slates of electors on to his office.

New - Ron Johnson told us he has “no idea” who tried to get him to share fake electors from MI and WI to Pence on Jan. 6. Says he was aware of ask on Jan. 6 AM.

“I was aware that we got this package and that somebody wanted us to deliver it so we reached out” to Pence’s office. pic.twitter.com/bjJswKb28n

Later the same day, the senator again lied to reporters by saying that “interns” were to blame for accepting the slates of fabricated electors and that he “had no idea” who had delivered them to his aides.

Does anybody seriously believe an intern dropped a mysterious envelope off at Ron Johnson's office and his Chief of Staff nearly had him hand-deliver it to the Vice President?

This is total nonsense. pic.twitter.com/urV76dI8wR

Two days later, Johnson himself revealed that he knew all along that Troupis was the source of the fabricated electoral votes by providing more text messages to the conservative activist and columnist John Solomon. The texts published by Solomon, embedded in a column that accused the January 6 committee of making too much of the senator’s role in the plot, also showed that the senator had put Trump’s lawyer in touch with his chief of staff, Sean Riley, just six minutes after being asked to pass on the fake electoral votes. A screenshot of a Jan. 6, 2021, text message to Sen. Ron Johnson from Jim Troupis, a lawyer for the Trump campaign in Wisconsin. The text was obtained by John Solomon, a conservative activist and columnist. 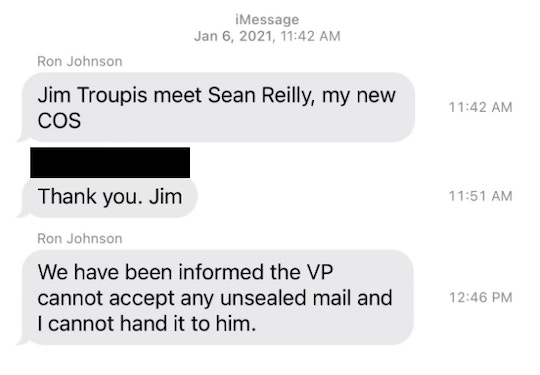 A screenshot of Jan. 6, 2021, text messages sent by Sen. Ron Johnson to Jim Troupis and Johnson’s chief of staff, Sean Riley. The texts were obtained by John Solomon.

Solomon also obtained and published a longer version of the text exchange between Riley and the Pence aide, Chris Hodgson — which was apparently copied from Riley’s phone. A screenshot of a Jan. 6, 2021, text exchange between Sean Riley and Chris Hodgson, an aide to then-Vice President Mike Pence. The texts were obtained by John Solomon.

The longer version of the exchange shows that Pence’s aide explained that the fake Electoral College votes “were supposed to come in through the mail.” That text suggests that the vice president’s office was not taken by surprise by the effort to submit false electoral votes and was perhaps just sticking more rigorously to the letter of the law governing presidential elections, which states that the results of the Electoral College votes in each state are supposed to be sent to the vice president by registered mail, not hand-delivered.

In an interview with a sympathetic right-wing radio host in Wisconsin two days after the committee pointed to his role, Johnson stressed that the text messages showed that his documented role in the plot lasted just over an hour. “My office’s entire involvement in this thing lasted 70 minutes,” Johnson told radio host Vicki McKenna. “My involvement was probably seconds, maybe a minute or two,” he said.

By focusing so intently, in interview after interview, on the time stamps of the text messages about the fake electors plot he sent and received on January 6, Johnson seems to be drawing attention away from the question of why he instantly agreed to help Trump’s lawyer, Troupis, push the plot forward.

And when Johnson claims, as he did to the right-wing Wisconsin radio host, that he barely knew Troupis at the time, he is banking on listeners in McKenna’s ultraconservative audience not knowing that Troupis was a central figure in the effort to undermine the certification of the electoral vote and that Johnson had given Troupis a public platform to push his lies about election fraud just three weeks before January 6.

On December 16, 2020, Johnson chaired a hearing of the Senate Homeland Security and Governmental Affairs Committee dedicated to “Examining Irregularities in the 2020 Election,” which featured testimony from Troupis and Jesse Binnall, another Trump lawyer who had unsuccessfully filed suit to overturn the results of the presidential election in Nevada.

A week later, Johnson used his official Twitter feed to share false claims of electoral fraud in Wisconsin that Troupis had made at the hearing.

There is a lot more to the story of Wisconsin’s 2020 election and recount.

But @JudgeTroupis testified that over 200,000 votes were not valid. pic.twitter.com/IBiiLiEY4s

Just one week before that hearing, on December 9, 2020, Troupis had received detailed written instructions about how to create a fake slate of electors for Trump from another lawyer working with the Trump campaign, Kenneth Chesebro, an ally of John Eastman, whose plan for halting congressional certification of the Electoral College results on January 6, 2021, had been embraced by Trump. As the New York Times reported last month, Troupis also wrote to a Trump adviser on December 7, 2020, that submitting alternate slates of electors in swing states was part of a plot to give Pence a reason to delay congressional certification of the Electoral College results on January 6.