A new wave of attacks and threats against the FBI show that Trump’s followers are unrepentant, continuing their assault on democracy. The brutal days since the FBI’s search of former President Donald Trump’s Mar-a-Lago home have brought America a slow-motion rerun of the January 6 insurrection.

Pro-Trump cultists have once again declared war on the U.S. government, just as they did on January 6, 2021, and are once again bent on overturning the rule of law. It is yet another warning of what the pro-Trump Republican Party has become: a violent, apocalyptic cult of personality. The nation is on notice of what will happen if Trump once again becomes president.

Ricky Shiffer, who died at age 42 for Trump’s sake, is the perfect symbol of Trump’s rage-filled GOP.

Shiffer tried to attack the FBI’s Cincinnati office on August 11 in an act of revenge for the bureau’s court-authorized search for classified documents at Mar-a-Lago. Just after the FBI’s August 8 search, an account under Shiffer’s name on Trump’s social media platform, Truth Social, urged people to “get whatever you need to be ready for combat.”

He tried to break through a bulletproof barrier outside the FBI’s office by shooting his nail gun, then fled into a running gun battle with police. While he was fleeing, he apparently took time to post on social media again, writing, “Well, I thought I had a way through bullet proof glass, and I didn’t.  If you don’t hear from me, it is true I tried attacking the F.B.I., and it’ll mean either I was taken off the internet, the F.B.I. got me, or they sent the regular cops.”

Within hours, he was dead in a cornfield after a shootout with police.

Shiffer was just one of many Trump supporters who have engaged in either violence or threats of violence in recent days against the FBI, the Justice Department, and the federal judge who approved the warrant used by the FBI in last week’s search.

Adam Bies, of Mercer, Pennsylvania, was arrested on August 12 after he posted a series of violent threats against the FBI. The hate-filled rhetoric he used underscores just how dangerous the threats from Trump’s disciples have become. “Every single piece of shit who works for the FBI in any capacity, from the director down to the janitor who cleans their fucking toilets deserves to die,” Bies wrote on Gab, a right-wing social media platform. “You’ve declared war on us and now it’s open season on YOU. … HEY FEDS. We the people cannot WAIT to water the trees of liberty with your blood.”

At the same time, a group of heavily armed Trump supporters, including some with assault weapons, stood outside the FBI’s Phoenix office last weekend to protest — and intimidate — after the Mar-a-Lago search. Meanwhile, the threats against the federal judge who approved the search warrant have become increasingly dark; one Trump cultist posted, “I see a rope around his neck.” The threats against the FBI, the Justice Department, and the judge have become so frequent and ominous across the country since the Mar-a-Lago search that the FBI and the Department of Homeland Security issued a joint intelligence bulletin on August 12 warning about them.

Shiffer, Bies, and many others were primed for violence by Trump, who triggered this latest wave of threats on the day of the FBI search by using rhetoric purposefully designed to incite, claiming that Mar-a-Lago was “currently under siege, raided, and occupied.” It was the same type of language of violence mixed with victimhood that Trump used to incite the mob to storm the Capitol during the January 6 insurrection.

The insurrection involved a mob of thousands who attacked the building in order to try to stop the congressional certification of the election of Joe Biden as president. Incited to march on the U.S. Capitol by Trump when he spoke to his supporters at a rally near the White House that day, the mob overwhelmed the police guarding the Capitol and succeeded in delaying the certification and nearly stopping it.

Yet today Trump’s followers are unrepentant and unashamed, despite hundreds of arrests, a high-profile House investigation that has revealed the depths of the danger to democracy from the insurrection, and an ongoing Justice Department criminal investigation of January 6 and Trump’s efforts to overturn the election.

None of that matters to the Trump cultists. They are at it again. 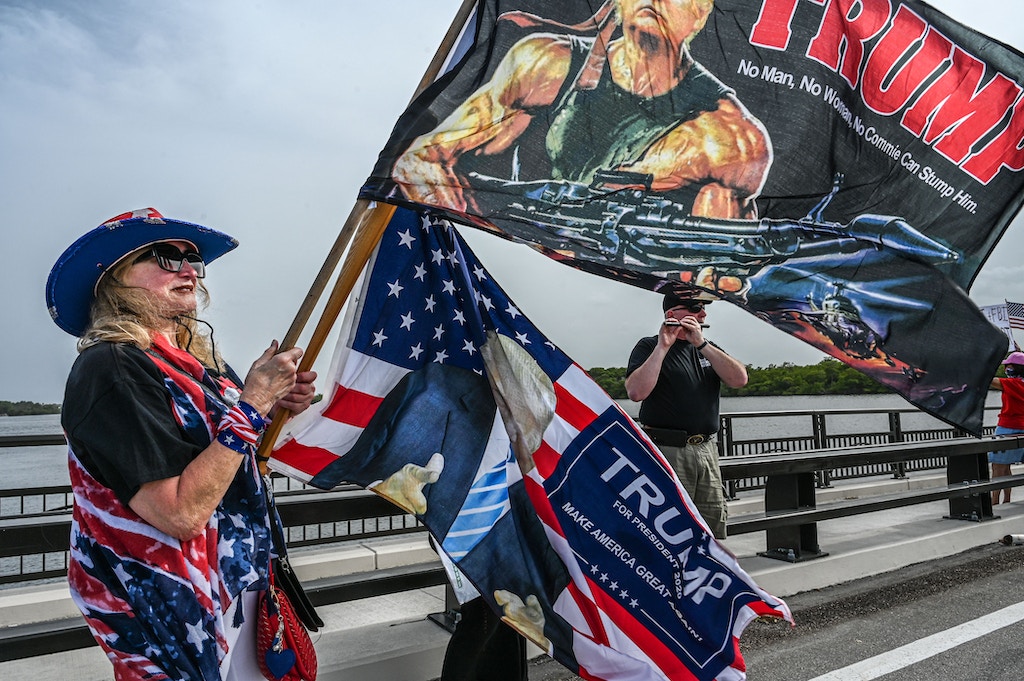 Supporters of former President Donald Trump gather near his residence at Mar-a-Lago in Palm Beach, Fla., on Aug. 9, 2022.

The FBI search of Mar-a-Lago was just the latest excuse Trump cultists have used to intensify their attacks, though the militia wing of the Republican Party has been active since January 6, 2021. They have gone after a wide array of targets that they consider enemies: On June 11, for example, just two days after the first House hearing investigating the insurrection, police in Coeur d’Alene, Idaho, stopped a U-Haul truck and arrested 31 members of a white nationalist group called Patriot Front. They were on their way to a Pride event, where officials said they planned to start a riot.

It is becoming increasingly clear that the upsurge of violence and threats of violence in the wake of the Mar-a-Lago search are just part of a steady and intensifying march of Trump supporters toward a permanent war against American democracy.

To be sure, right-wing extremist hatred of the federal government goes back long before Trump. That hatred soared over the last few decades, particularly in the wake of the bloody Branch Davidian raid by agents of the Bureau of Alcohol, Tobacco, Firearms and Explosives in Waco, Texas, in 1993 and the Ruby Ridge siege in Idaho by the FBI and the U.S. Marshals Service in 1992. Right-wing extremist groups still have as their bible a racist, antisemitic novel written more than 40 years ago called “The Turner Diaries.” The violent and dystopian novel, first published in 1978, depicts a bombing of FBI headquarters as well as the hanging of members of Congress. The parallels between the novel’s plot and the real-life events of the January 6 insurrection, and the most recent threats of violence against the FBI, are unnervingly close. Trump has brought the hellscape of “The Turner Diaries” out of the realm of perverted fantasy and into grim reality.

Trump has brought the hellscape of “The Turner Diaries” out of the realm of perverted fantasy and into grim reality.

Shiffer was a true soldier in Trump’s war. There’s social media evidence that he was at least January 6-adjacent. He appeared in a video at a pro-Trump rally in Washington, D.C.’s Black Lives Matter Plaza near the White House the night before the insurrection, and he apparently posted on Twitter that “I was there” in reply to a photo of January 6 insurrectionists scaling the Capitol’s walls.

Bies, meanwhile, has been an aggressive anti-vaxxer — showing that his newfound hatred of the FBI is part of a larger hatred of the entire government. “I threw away my 25-year career in software and marketing after refusing the vaccine,” Bies wrote on Gab. “I will never treat you scumbag democrats with respect, or be friends with you in any way for the rest of my life. I cannot wait to see all of you stupid pieces of shit drop dead from your vaccine side effects.”

Far from trying to rein in Trump and his brown shirts, GOP leaders have stoked the threats of violence. They quickly followed Trump’s lead in the days after the FBI search in Florida and began issuing calls to defund the FBI, claiming that it was just like the Gestapo. Sen. Marco Rubio, R-Fla., compared the search to the actions of “3rd world Marxist dictatorships,” while other Republicans announced that they were now at war with the U.S. government. Carl Paladino, a Republican congressional candidate in New York, said in a radio interview with right-wing Breitbart News that Attorney General Merrick Garland should “probably be executed” before quickly claiming that he was being facetious. House Minority Leader Kevin McCarthy, R-Calif., threatened the Justice Department with an investigation if Republicans retake the House, while saying that the Justice Department was now in an “intolerable state of weaponized politicization.”

Far from trying to rein in Trump and his brown shirts, GOP leaders have stoked the threats of violence.

Republican politicians have also worked to purge all anti-Trump dissidents from the party, filling key state posts that will have influence over future elections with radical-right figures who still question the 2020 presidential election. The purification of the party extends to affiliated groups that once sought to bring new ideas to conservatism but now are nothing more than shills for Trump. That was clear earlier this month at the Conservative Political Action Conference in Dallas, where a fake jail cell holding a supposed January 6 insurrectionist was set up; it was meant to symbolize how Republicans now view the insurrectionists as political martyrs. (Reporters at the conference wrote that a right-wing group run by Brandon Straka was responsible for the cage and that Straka may have been the person inside, although his identity couldn’t be confirmed. Straka was convicted for his role in the January 6 insurrection and later cooperated with the FBI.)

Like a mafia leader, Trump is seeking to exploit the violence, threats of violence, and the GOP’s broad acceptance of his agenda. Last weekend, he reportedly had an ally try to contact Garland about lowering the political temperature surrounding the FBI search — even as he continued to rail against the raid as a witch hunt. It was straight out of Trump’s long-standing playbook: Pretend to be the victim, rant and rave, and then play games with his adversary.